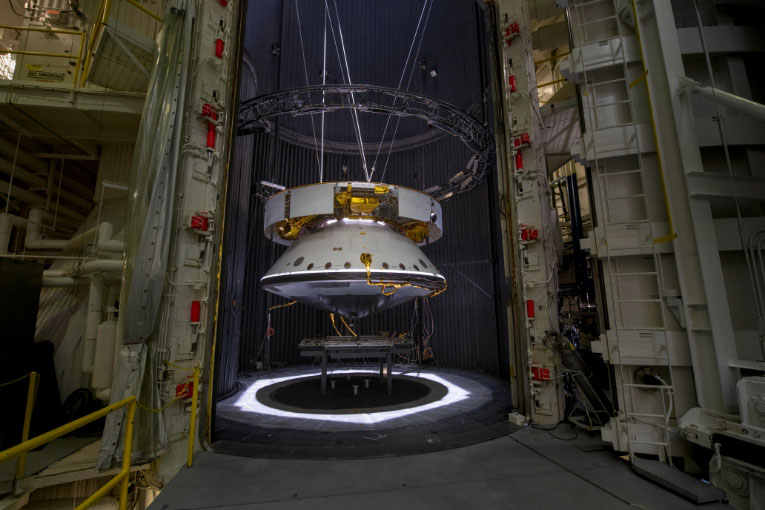 Perseverance will travel to Mars in an almost identical way to NASA's Curiosity rover, which landed in 2012. Three major components of the flight system will deliver the new rover safely to the surface of the Red Planet: the cruise stage, aeroshell and descent stage.

After separating from the rocket, the ring-shaped cruise stage flies the aeroshell, and Perseverance within it, through interplanetary space to Mars. To remain stable throughout cruise, the combined spacecraft spins at about 2 rpm during the journey. The cruise stage includes eight precise thrusters that receive commands to fire at specific times during the eight-month journey to help shape the spacecraftâs trajectory to Mars (these are called âtrajectory correction maneuversâ).

The cruise stage also has solar arrays that provide power in addition to the rover's main power source, the Multi-Mission Radioisotope Thermoelectric Generator. And it is equipped with an assortment of antennas for communicating with Earth. More information about the latter is available in the Telecommunications section of this press kit. 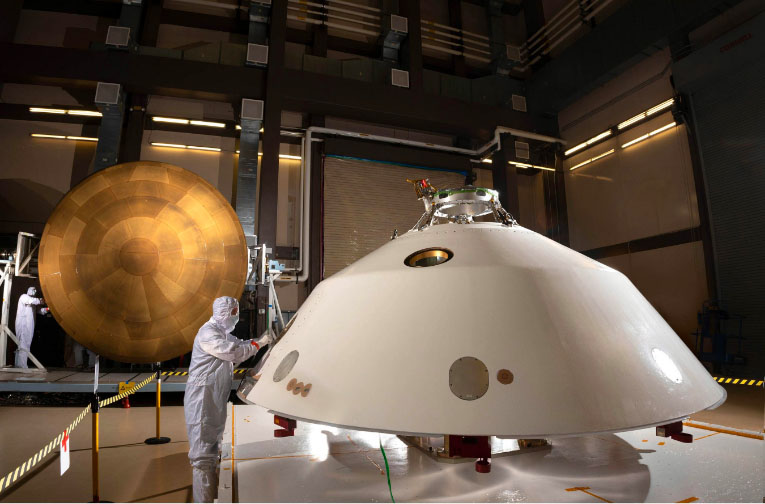 This capsule protects the rover and its descent stage through its Mars atmospheric flight until it is near the Martian surface. The aeroshell has two parts: the conical back shell and, at its base, a heat shield, both built by Lockheed Martin Space in Denver.

The heat shield is covered with tiles of a material called phenolic impregnated carbon ablator (PICA) that was invented by NASA's Ames Research Center in California's Silicon Valley. Engineers estimate the spacecraft could be exposed to temperatures as hot as about 2,370 degrees Fahrenheit (about 1,300 degrees Celsius) from the friction generated as it descends through the Martian atmosphere. The job of the heat shield is to carry most of this heat away from the Perseverance rover.

The back shell contains several components critical to landing the rover: weights for altering the spacecraft's center of mass so it can fly correctly, a parachute and antennas for communicating directly with Earth and for communicating with orbiters at Mars that can relay messages to Earth. The back shell and the heat shield also have a sensor suite known as MEDLI2 (more detail below). Since the back shell will also get hot â though not as hot as the heat shield â it, too, sports a protective covering, in this case a material known as SLA-561V.

Atmospheric friction will slow the entry vehicle to about 540 mph (865 kph) and about 7 miles (11 kilometers) in altitude. At around this point in the landing sequence, the spacecraft will command deployment of the parachute. It does this once it has determined itself to be in an optimal position relative to the landing target, a technique called âRange Trigger.â The parachute inherits its design from the Mars Viking missions of the 1970s but is scaled up to 70.5 feet (21.5 meters) in diameter and strengthened to accommodate Perseveranceâs heavier mass.

Parachute inflation will slow Perseverance further. The heat shield will be jettisoned before landing so that a radar and a new, specially developed Terrain-Relative Navigation system can help the rover land safely in Jezero Crater.

The back shell with the parachute will separate from what is known as the powered descent vehicle (which includes the rover and the descent stage, a rocket-powered structure that helps the spacecraft land) about 60 seconds before touchdown. 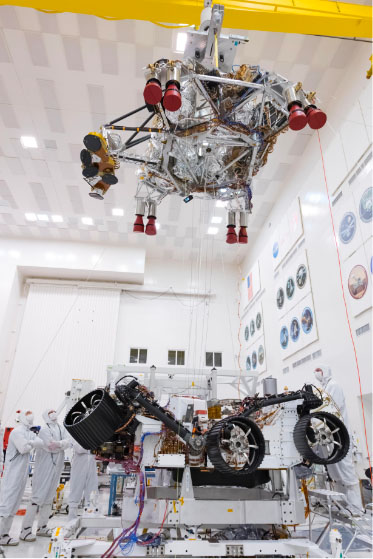 At this point, Perseverance is still attached to the rocket-powered descent stage. Think of it as a kind of jetpack with eight engines that safely lowers the spacecraft to the ground. The descent stage slows down until it's hovering over the surface. Then, it slowly winches Perseverance down on a bridle as part of the sky crane maneuver.

When the rover is safely on the ground, the cables connecting it to the descent stage are cut. The descent stage flies off to make its own uncontrolled landing on the surface, a safe distance away from Perseverance.

Based on an instrument flown on NASAâs Mars Science Laboratory (MSL) mission which landed the Curiosity rover in 2012, MEDLI2 is a next-generation sensor suite that collects temperature, pressure and heating measurements on the heat shield and back shell during entry, descent and landing. Data collected by MEDLI2 will help engineers validate their models for designing future systems (both robotic and crewed) for entry, descent and landing systems.

The MEDLI2 suite is managed by NASA Langley Research Center in Hampton, Virginia.

More information about MEDLI2 can be found in this story. 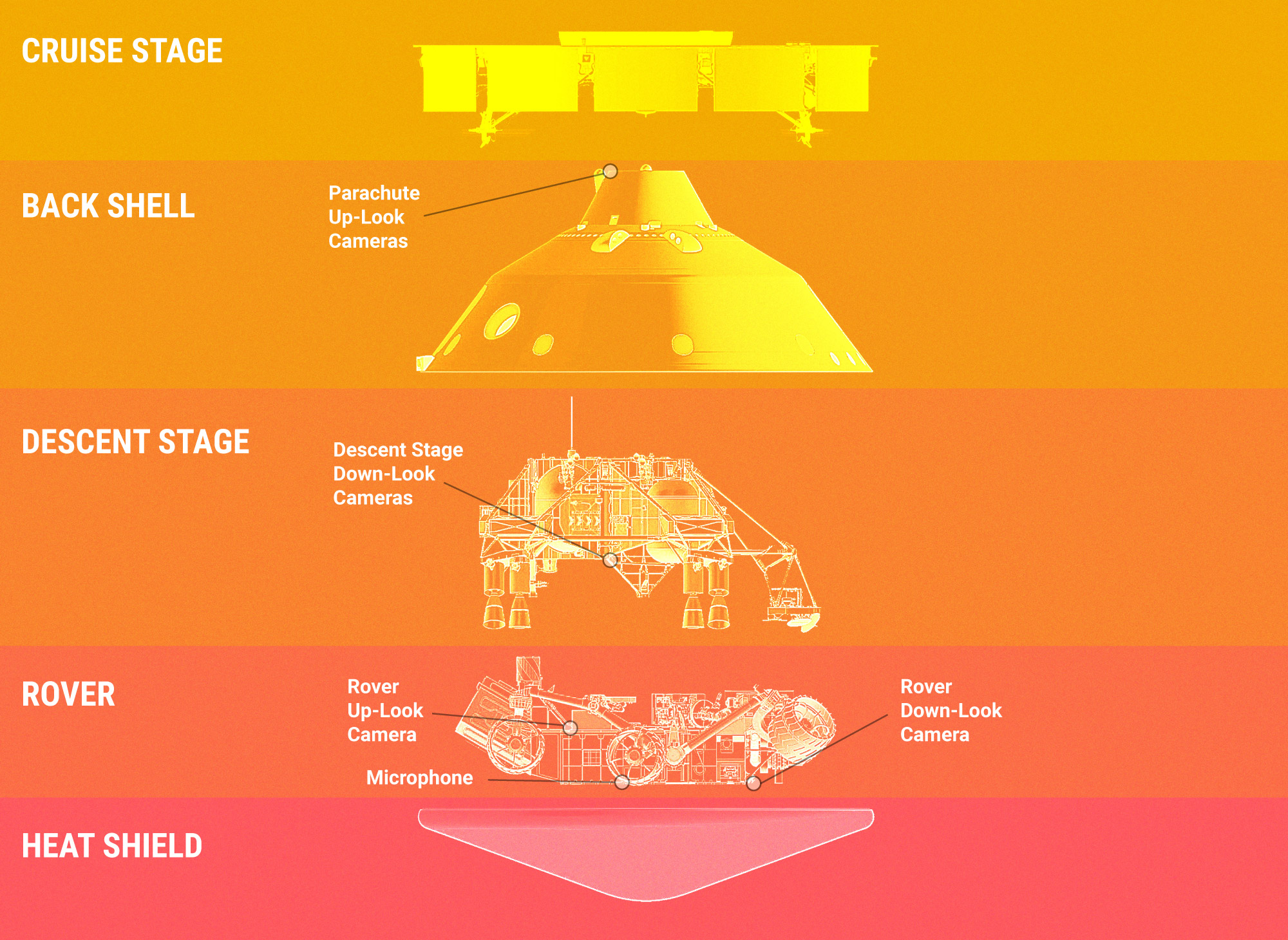 High-quality imagery is one of an engineer's best friends when it comes to understanding the in-flight operations of any system. Mars 2020 carries six color cameras (more than on any previous Mars landing mission) for public engagement and engineering reconstruction of what happened during entry, descent and landing. (There is one black-and-white camera specially dedicated to Terrain-Relative Navigation that plays a key role in the landing itself.)

Perseverance also includes an off-the-shelf microphone located on an aft-side panel. The microphone is intended for public engagement and later entry, descent and landing analysis. It could possibly capture sounds during the landing sequence, including parachute deployment and firing of the descent stage's Mars landing engines.

More information about the entry, descent and landing phase is in the Mission Overview section.