Several brand new or next-generation technologies will be riding on the rocket to Mars. Two of these are officially designated technology demonstrations â experiments that seek to prove a first-of-their-kind capability, with limited scope. Previous examples of these groundbreaking experimental technologies are the Mars Pathfinder mission and its rover (Sojourner), the Mars Cube One (MarCO) CubeSats that flew by Mars, and the NASA-sponsored rocket planes and lifting body vehicles that paved the way for the space shuttle. The success of these technology demonstrations is not connected to the overall success of the Perseverance rover and the Mars 2020 mission. 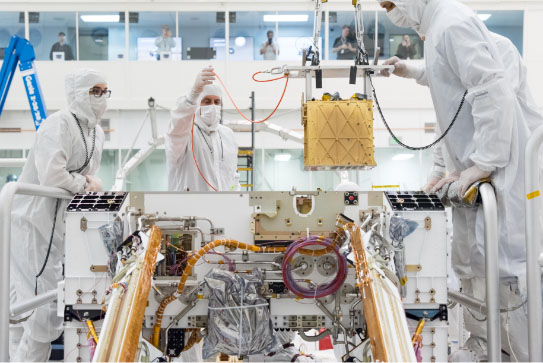 Located inside the body of the Perseverance rover, MOXIE will test technology that converts carbon dioxide in the Martian atmosphere into oxygen. The âIâ in MOXIE stands for âin situ resource utilization,â or ISRU â the concept of using resources found where a spacecraft lands rather than bringing those resources from Earth.

MOXIE also serves as one of Perseveranceâs payload instruments; more information is available in the Payload Instruments section of this press kit. 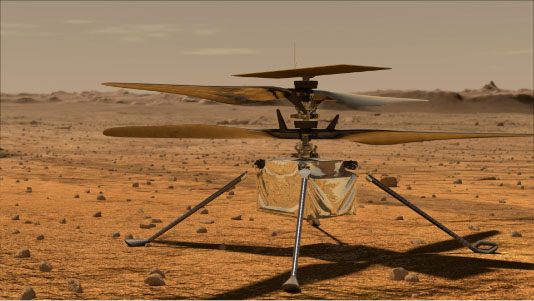 Weighing just about 4.0 pounds (1.8 kilograms), the Ingenuity Mars Helicopter is a small, autonomous rotorcraft designed to test â for the first time â powered flight in the thin Martian atmosphere. This lightweight helicopter does not carry any science instruments.

Ingenuityâs performance during its experimental test flights will help NASA make decisions about small helicopters for future Mars missions, where they could perform in a support role as robotic scouts, surveying terrain from above, or as full standalone science craft carrying instrument payloads. Taking to the air would give scientists a new perspective of a regionâs geology and allow them to peer into areas too steep or slippery to send a rover. In the distant future, they might even help astronauts explore Mars.

The Mars Helicopter Delivery System â designed collaboratively by Lockheed Martin Space and JPLâs Mars 2020 and helicopter teams â attaches the helicopter to the belly of the rover for their journey to the Red Planet. This system protects Ingenuity from debris during landing and will deploy the helicopter onto the Martian surface roughly two-and-a-half months later.

Demonstrate powered flight in the thin atmosphere of Mars. 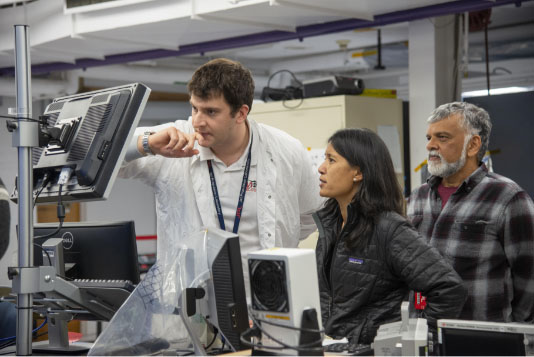 Given the high-risk, high-reward nature of Ingenuityâs mission, the team has many milestones that they need to hit on the road to success:

If all those steps are successful, Ingenuity will attempt up to four additional test flights. All test flights will take place within a 30-Martian-day (31-Earth-day) window of activities allowed for the helicopter, after which point the Perseverance rover will need to move on for its science operations. 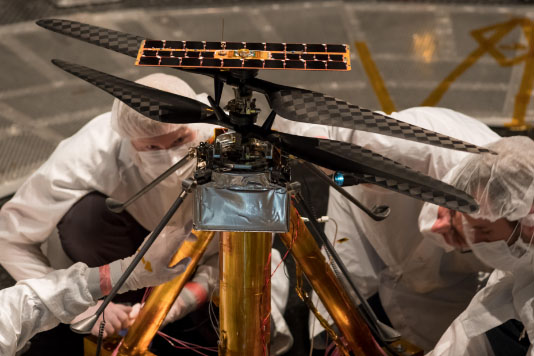 What makes the helicopter a special piece of technology?

More information can be found at the Ingenuity Mars Helicopter website.