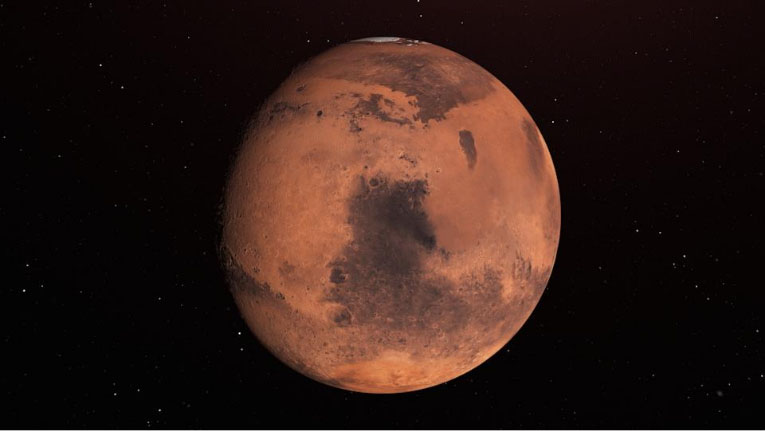 Billions of years ago, Earth and Mars were much more similar than they are today. Both had liquid water at the surface; both had magnetic fields to protect their surface from the Sunâs radiation. If life developed on Earth at that time, could it have also developed on Mars?

NASA has sent rovers, landers and orbiters to investigate that key astrobiological question at the Red Planet. Scientists can study rocks and sediment on the Martian landscape to learn when liquid water disappeared, and when the atmosphere started to thin. This record can reveal when Mars had the ideal conditions for life.

But Perseverance will be different: Itâs the first Mars rover designed to collect samples that could one day be returned to Earth. Despite all of the roverâs immense technical capabilities, there are far more powerful laboratories and science tools on our planet than we could hope to send to Mars. As with the Moon samples returned by the Apollo missions, Mars samples can benefit future generations of scientists who will use technology that hasnât been invented yet.

The Mars 2020 mission will also look ahead to the day when astronauts travel to Mars. Perseverance carries a new experiment called MOXIE that will test technology to convert carbon dioxide in the Martian atmosphere into oxygen that could be used for rocket propellant or breathing. The rover will also test new automated technologies that will be useful for landing humans or equipment on Mars. These efforts will feed into NASAâs plans for sending humans to Mars, with the Artemis program returning astronauts to the Moon as the first step.

Perseverance will contribute to the overarching goals of NASAâs Mars Exploration Program: 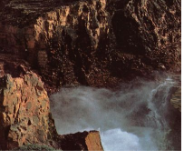 GOAL 1
Determine whether life ever existed 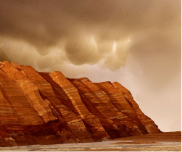 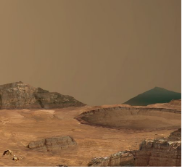 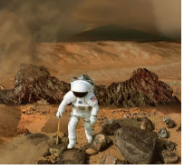 To reach the first three of these goals, NASA has determined the following more specific science objectives for Perseverance:

NASA has also tasked the Mars 2020 team with a mission objective to prepare for future human exploration by conducting the following investigations:

Science instruments are state-of-the-art tools for acquiring information about Martian geology, atmosphere, environmental conditions and potential signs of life (biosignatures). The missionâs science supports the field of astrobiology, which aims to understand the origin, evolution and distribution of life in the universe. 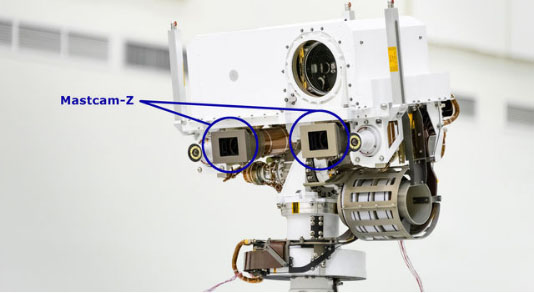 Mastcam-Z is a pair of next-generation science cameras that sit on Perseveranceâs Remote Sensing Mast, or âhead.â This pair of zoomable cameras can be used to shoot video and to create high-resolution, color stereo/3D panoramas of the Martian landscape. These images help rover operators drive and place the roverâs arm instruments. Analysis of the geology and colors of the landscape help scientists determine the composition and past history of the landing site region. 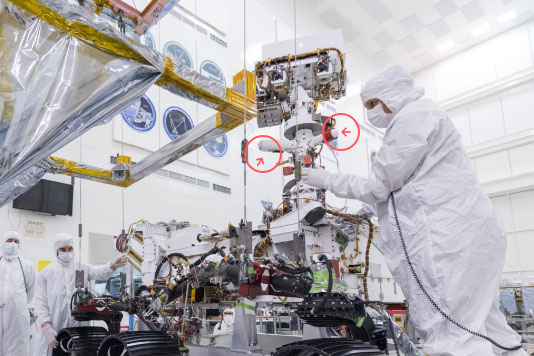 MEDA is a set of sensors distributed across Perseveranceâs mast and body that measures wind speed and direction, air pressure, relative humidity, ambient temperature and solar radiation. Solar radiation affects the surface environment and is important to understand more fully before sending humans to Mars. A skyward-facing camera, SkyCam measures how tiny airborne particles, or aerosols, such as dust and ice can affect sunlight reaching the surface.

This set of sensors was built by an international team led by Spainâs Centro de AstrobiologÃ­a. 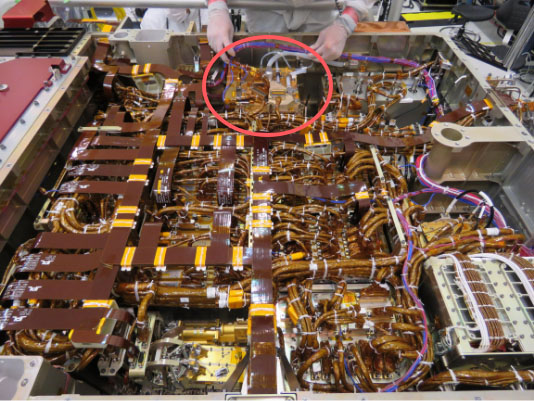 MOXIE is a technology demonstration that will show whether such technology could be used to help launch rockets off the surface of Mars in the future. (The âIâ in MOXIE stands for âin situ resource utilization,â or ISRU â the concept of using resources found where a spacecraft lands rather than bringing those resources from Earth.) MOXIE converts carbon dioxide in the Martian atmosphere into oxygen, which is required in massive quantities in order to launch rockets. Larger versions of MOXIE could be brought to Mars in the future to enable astronauts to launch themselves back to Earth. (Launching humans off of Mars will take tens of metric tons of liquid oxygen, which is much more than MOXIE can produce.) Oxygen from MOXIE technology could also be used for breathing, though future systems will need to be about 200 times larger for human missions. 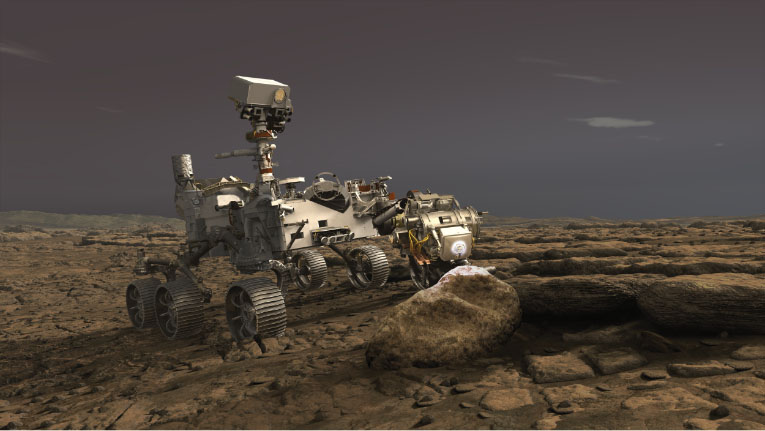 Located on the end of Perseveranceâs robotic arm, PIXL aims a tiny but powerful X-ray beam at rocks. This produces a different âglow,â or fluorescence, depending on the rockâs elemental chemistry. PIXL creates postage stamp-sized maps, revealing how and where these chemicals are positioned relative to each other as well as to a rockâs textures and structures. That information can help scientists determine how these features formed, including whether they were biological in nature. 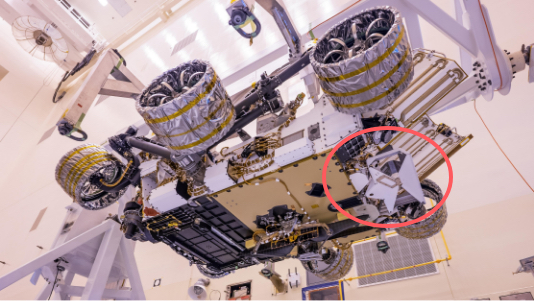 RIMFAX is the first ground-penetrating radar to be carried by a rover or lander to Mars. Such radars have been used by orbiting spacecraft, but bringing them to the surface offers much higher-resolution data. RIMFAX determines how different layers of the Martian surface formed over time. 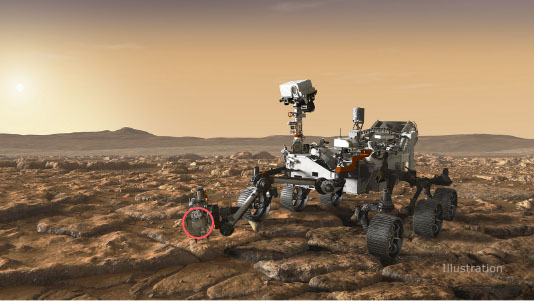 The SHERLOC instrument is circled in red in this illustration of the Perseverance rover. Image credit: NASA/JPL-Caltech | Full image and caption

SHERLOC is located near PIXL on Perseveranceâs robotic arm. As PIXL looks for elemental chemistry, SHERLOC looks for organic molecules and minerals. While the presence of organic molecules helps scientists determine which samples to collect for future return to Earth, the presence of different minerals helps explain how a sample was formed. SHERLOC flashes an ultraviolet laser over surface material, which emits a subtly different glow depending on which organics and minerals are present. SHERLOC also has a camera for taking microscopic images of rock grains and surface textures. 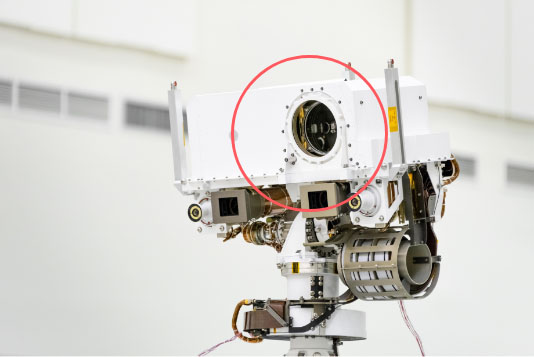 This next-generation version of Curiosityâs ChemCam instrument is located on Perseveranceâs mast. Like its predecessor, SuperCam uses a pulsed laser to study the chemistry of rocks and soil. It also uses three new techniques to probe the mineral content of its targets and the hardness of the rocks. One of these techniques heats small amounts of the target to around 18,000 degrees Fahrenheit (10,000 degrees Celsius), creating a bright âspark.â SuperCam can then determine the chemical makeup of these rocks from the plasma that is generated by the laser zaps. More information about its techniques is available in this feature story about the instrument.

SuperCam is a collaboration between Los Alamos National Laboratory and Franceâs Institut de Recherche en Astrophysique et PlanÃ©tologie (IRAP), which provided key parts of the instrument, including a special microphone. Spain built and tested the SuperCam calibration target assembly. The Spanish contributions were supported by the Spanish Ministry of Science and Innovation (MICINN), and by the University of Valladolid and local and regional governments.