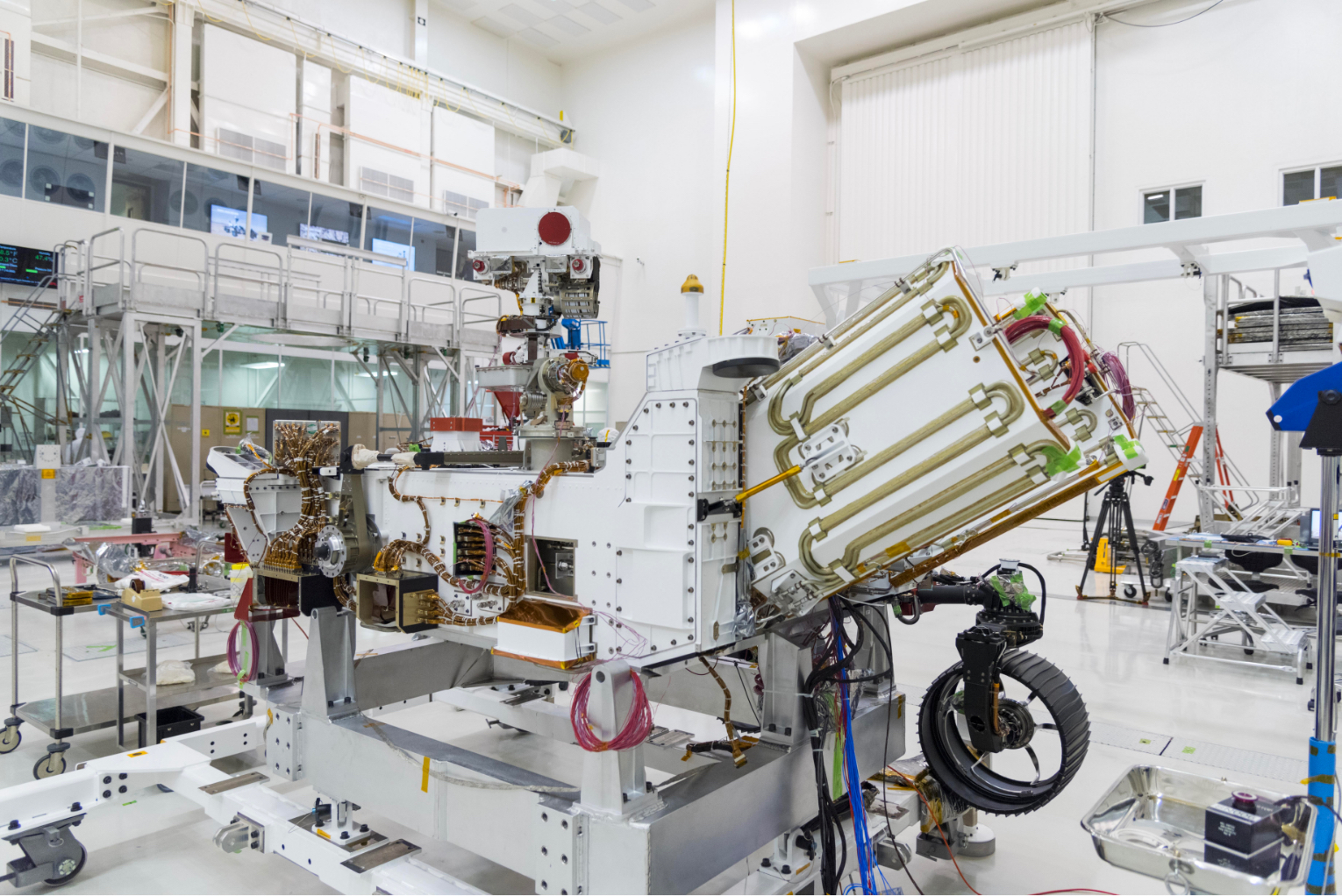 The Perseverance rover requires electrical power to operate. The dependable flow of electricity for the rover comes from a power system known as a Multi-Mission Radioisotope Thermoelectric Generator (MMRTG), provided to NASA by the U.S. Department of Energy (DOE).

Perseverance's power system works essentially like a nuclear battery. The MMRTG converts heat from the natural radioactive decay of plutonium-238 into a steady flow of electricity. The power system will reliably produce about 110 watts (similar to a light bulb) at the start of Perseverance's mission, declining a few percent each year in a very predictable way. The MMRTG doesn't just power the rover; excess heat from it keeps the rover's tools and systems at their correct operating temperatures.

The MMRTG also charges two lithium-ion batteries, which are used during daily operations and when the demand temporarily exceeds the usual electrical output levels. Perseverance's power demand can reach 900 watts during science activities.

The MMRTG, located on the aft of the rover, weighs about 99 pounds (45 kilograms) altogether. It contains 10.6 pounds (4.8 kilograms) of plutonium dioxide as its heat source.

The two batteries weigh a total of 58.4 pounds (26.5 kilograms) and each has a capacity of about 43 amp-hours.

More details on the MMRTG can be found on this electrical power page.

Why Does This Mission Use an MMRTG?

The Perseverance rover needs to operate extremely efficiently to accomplish its prime mission. An MMRTG allows the rover to work free of limitations associated with solar panels, such as the daily and seasonal variations of sunlight on Mars and the accumulation of fine Martian dust.

The advantages of MMRTG power give Perseverance greater mobility over a range of lighting conditions at different latitudes and surface locations. It also provides engineers with valuable flexibility in operating the rover (e.g., communications, mobility or science throughout the day and night).

Overall, the MMRTG enables the Perseverance team to maximize the operational capabilities of the rover and its science instruments.

How Reliable Is an MMRTG?

Perseverance's power system is identical to the one that the Curiosity rover has been using successfully since its launch in 2011.

The MMRTG is expected to operate for at least 14 years, significantly beyond Perseverance's prime mission duration (at least one Mars year, or about two Earth years).

NASA has used similar radioisotope thermoelectric generators (RTGs) successfully for five decades, including on the Apollo missions to the Moon and the Viking missions to Mars. They have also been used on spacecraft that flew to the outer planets and Pluto, such as during the Pioneer, Voyager, Ulysses, Galileo, Cassini and New Horizons missions.

What has NASA done to ensure Perseverance and its MMRTG will launch safely?

Like previous generations of this type of power system, Perseverance's MMRTG is built with several layers of protective material designed to contain its plutonium dioxide fuel in a range of potential accident conditions. The type of plutonium used in this kind of power system is different from the material used in weapons, and the system cannot explode like a bomb. For more details, NASA has provided this launch nuclear safety fact sheet.

NASA prepares contingency response plans for every launch that it conducts. Ensuring the safety of launch-site workers and the public in the communities surrounding the launch area is the primary consideration in this planning.