The Mars 2020 mission spacecraft that includes the Perseverance rover will launch to the Red Planet in July or August 2020 from Cape Canaveral, Florida. With the help of celestial mechanics, the spacecraft will arrive at Mars about seven months later. The date Perseverance lands on Mars â Feb. 18, 2021 â remains the same regardless of the launch date.

During a prime mission that will last at least one Mars year (about 687 Earth days), Perseverance's exploration of Jezero Crater will address high-priority science goals for Mars exploration, including key questions about the potential for life on Mars. The rover's astrobiology mission will search for signs of ancient microbial life, characterize the planetâs climate and geology and collect samples for future return to Earth. Perseverance will also gather knowledge about, and demonstrate the viability of, technologies that address the challenges of future human expeditions to Mars.

The Ingenuity Mars Helicopter, a technology demonstration, will also ride along to Mars, attached to the belly of the Perseverance rover. More information about its mission is in the Experimental Technologies section.

Why This Launch Period? 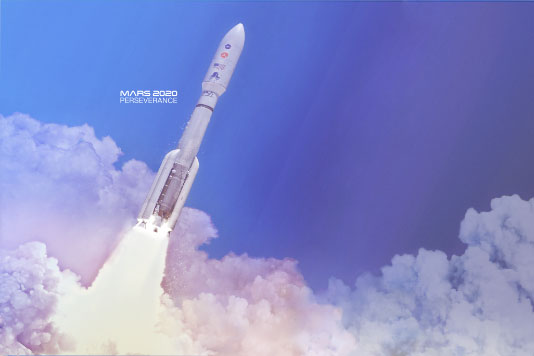 As Earth and Mars race around the Sun, with Earth on the inside track, Earth laps Mars about once every 26 months. Launch opportunities to Mars occur at the same frequency, when the planets are positioned so that a spacecraft launched from Earth will be on a relatively short track to Mars (on the order of several months). This planetary clockwork, plus the launch vehicle's lift capability, the spacecraft's mass, and the desired geometry and timing for the landing on Mars were all factors in determining the range of possible launch dates.

One priority for choosing a launch period within the range of possible dates was scheduling the landing to occur when NASA orbiters at Mars are passing over the landing site. Such scheduling aims to allow the orbiters to receive radio transmissions from the spacecraft carrying Perseverance during its descent through the atmosphere and landing. Landing on Mars is always difficult, and NASA prioritizes communications during landing so that engineers know what is happening at each stage.

Update: As of June 24, the launch is targeted for no earlier than July 22, 2020. Additional updates can be found on the missionâs launch page.

The launch period is the range of days when a launch is possible to achieve the designated mission goal â in this case, successfully landing at Mars' Jezero Crater. The launch period for Perseverance to do that is targeted to begin July 20 and extend to Aug. 11, 2020.

The window of time for each day of the launch period can be found on the mission website's launch page. 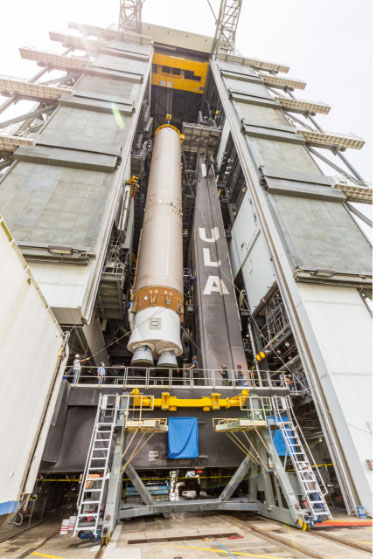 United Launch Alliance hoists its Atlas V first stage onto the mobile launch platform at Launch Complex 41, Cape Canaveral Air Force Station, about a month and a half before Perseverance is set to launch. Credit: ULA | + Full image and caption

This will be the 11th Mars launch on an Atlas rocket, and the fifth by the Atlas V following NASA's Mars Reconnaissance Orbiter in 2005, Curiosity rover in 2011, MAVEN orbiter in 2013 and InSight lander in 2018.

The spacecraft will ride into the sky inside a protective payload fairing atop the Atlas' Centaur stage. Approximately 50 to 60 minutes after launch (depending on when liftoff actually occurs), the Mars 2020 spacecraft will separate from the launch vehicle and complete the rest of its journey to Mars on its own. 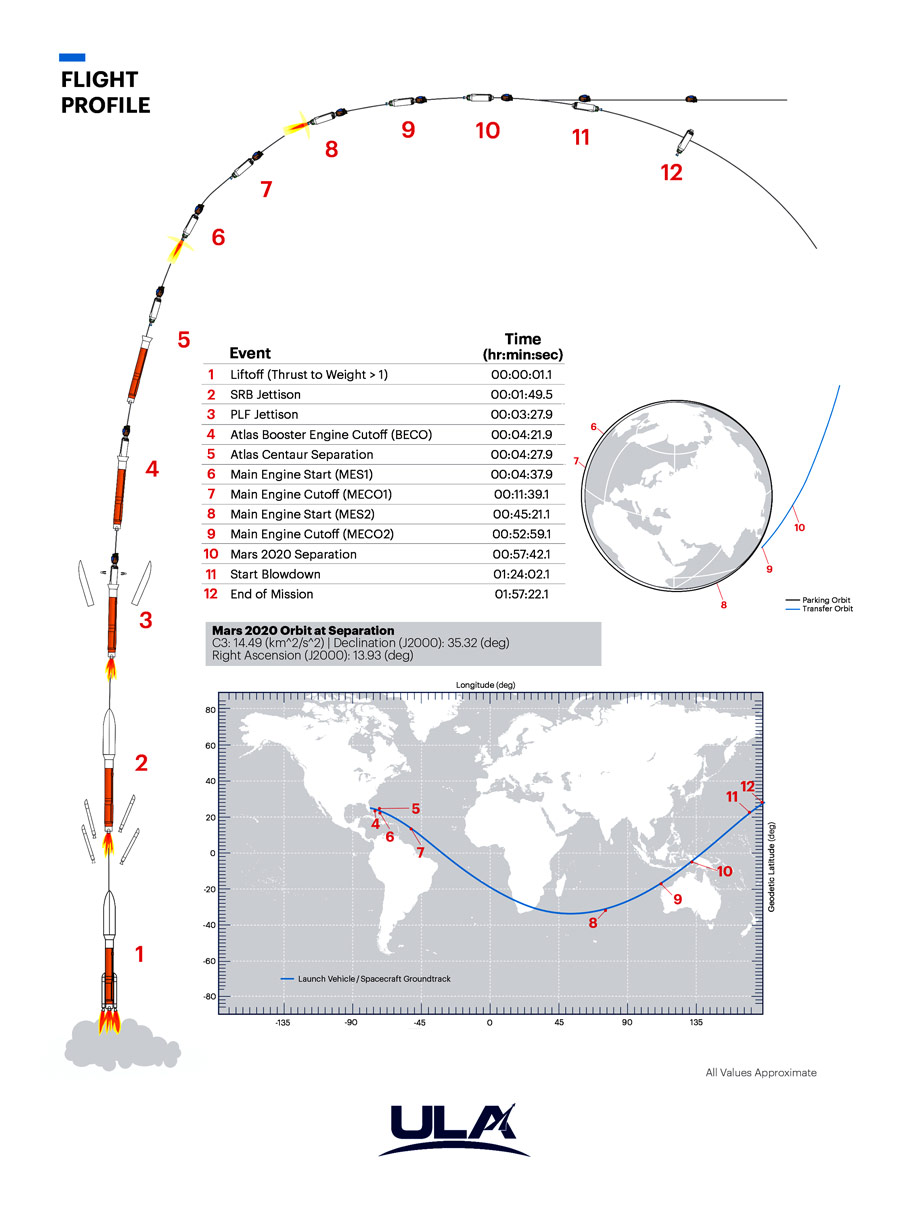 Key activities for the launch vehicle. Note that event times are dependent on the launch date and time. Credit: ULA | + View Larger Image

If Perseverance launches on the first day of its targeted launch period (July 20), it will take 213 days to travel about 309 million miles (497 million kilometers) from Earth to Mars. This is the cruise phase of the mission. (The cruise phase will be shorter if the spacecraft launches later.) The final 45 days of the cruise phase make up the approach subphase.

The cruise phase begins when the spacecraft separates from the launch vehicle. During cruise, the Perseverance rover and its descent stage are protected inside a capsule known as an aeroshell; the aeroshell is attached to the disk-shaped, solar-powered cruise stage. For more information about the cruise stage, aeroshell and descent stage, visit the Spacecraft section.

During cruise, engineers perform a series of events designed to check the spacecraft subsystems and instruments. They also execute the first three "trajectory correction maneuvers" during this phase. For these feats of navigation, mission team members estimate where the spacecraft is and design a maneuver that fires the cruise stage thrusters to alter the path of the spacecraft to arrive at a particular location at Mars.

Because some portions of the rocket are not cleaned as thoroughly as the spacecraft, the rocket is initially pointed along a trajectory that does not intercept Mars in order to avoid transporting unwanted Earth materials to the Red Planet accidentally. (More information on this technique, called "trajectory biasing," is in the Biological Cleanliness section of the press kit.) Another way of making sure the mission avoids transporting unwanted Earth materials to Mars is to ensure that hardware that does not meet cleanliness standards does not go to Mars accidentally. The maneuvers after separation from the Centaur stage will point the spacecraft more directly at Mars and target the area where it is supposed to enter the atmosphere.

The final 45 days leading up to the Mars landing constitute the approach phase, which focuses primarily on navigation activities. Two trajectory correction maneuvers are planned during this phase for any last adjustments (if needed) to the entry target. 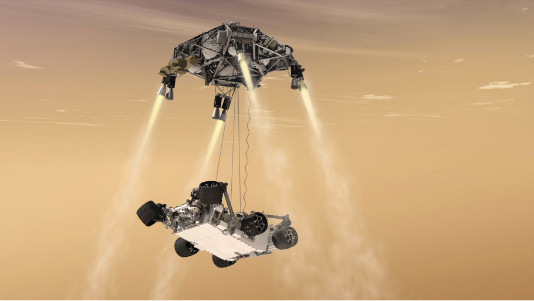 Perseveranceâs entry, descent and landing will be very similar to the Curiosity roverâs in 2012, as seen in this illustration. Image credit: NASA/JPL-Caltech | Full image and caption

The intense entry, descent and landing (EDL) phase begins when the spacecraft reaches the top of the Martian atmosphere, traveling at about 12,100 mph (19,500 kph). EDL ends about seven minutes later with the rover stationary on the Martian surface. 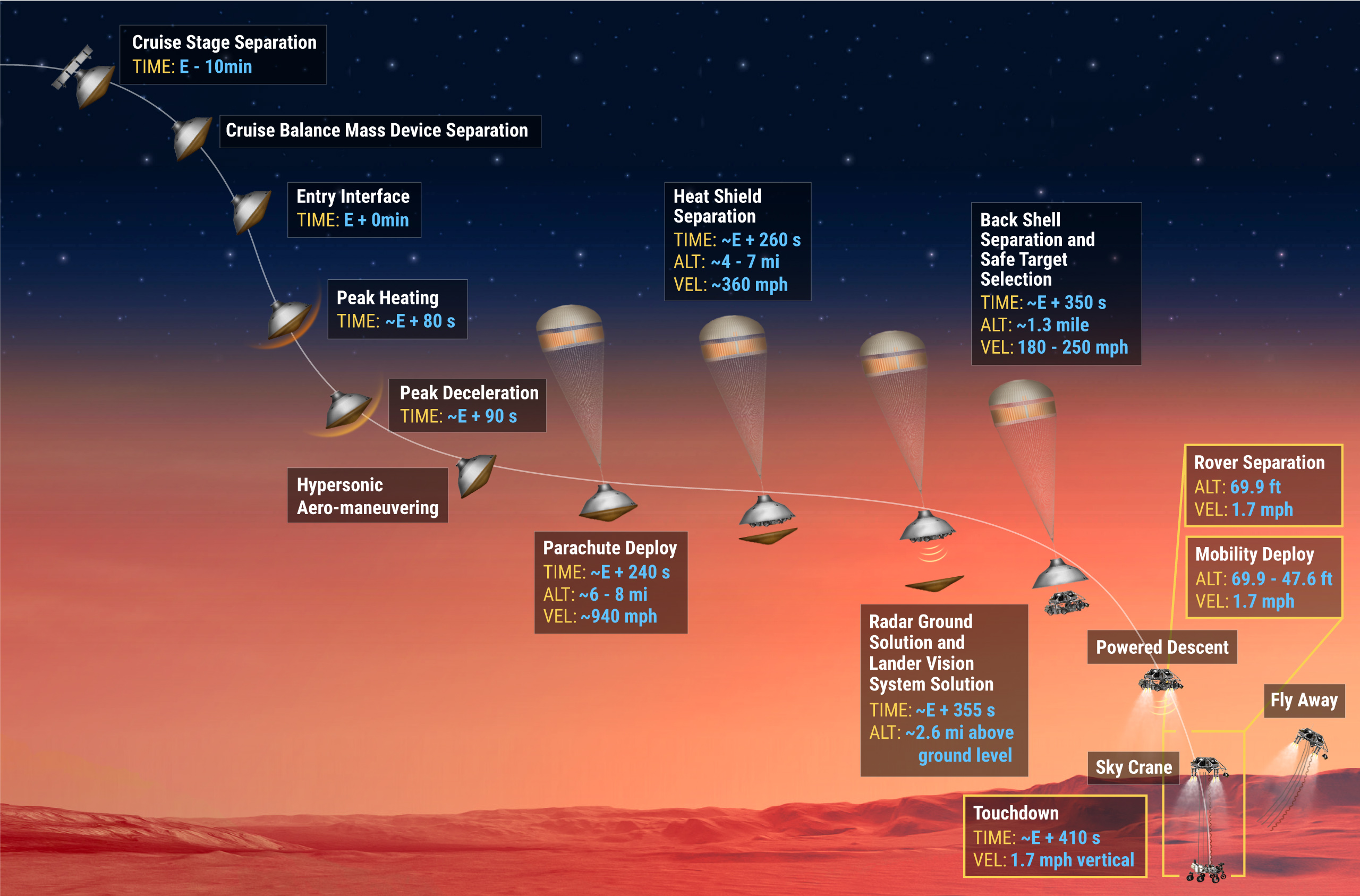 Ten minutes before the spacecraft enters the atmosphere, it sheds the cruise stage. The spacecraft will manipulate its descent into Mars' atmosphere using a technique called "guided entry" to reduce the size of the targeted ellipse-shaped landing area on Mars while compensating for variations in the density of the Martian atmosphere. During guided entry, small thrusters on the back of the aeroshell will adjust the angle and direction of lift, enabling the spacecraft to control how far downrange it is flying.

Peak heating occurs about 75 seconds after atmospheric entry, when the temperature at the external surface of the heat shield will reach about 2,370 degrees Fahrenheit (about 1,300 degrees Celsius). 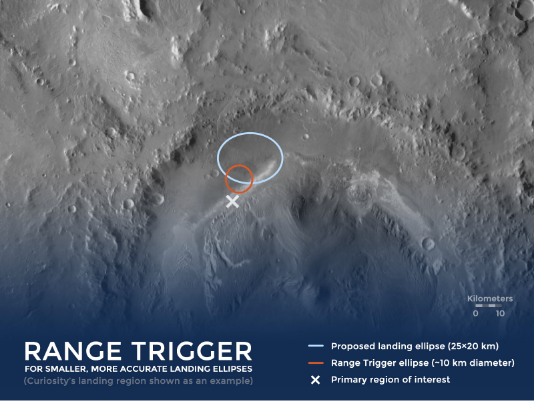 Range Trigger is a new technique the Mars 2020 mission will use to time the parachuteâs deployment. During EDL, it will autonomously update the deployment time for the parachute based on navigation position. The result: a smaller landing ellipse â or target landing area.

The parachute, which is 70.5 feet (21.5 meters) in diameter, deploys about 240 seconds after entry, at an altitude of about 7 miles (11 kilometers) and a velocity of about 940 mph (1,512 kph). Twenty seconds after parachute deployment, the heat shield separates and drops away.

The back shell, with parachute attached, separates from the descent stage and rover about 90 seconds after heat shield separation. At this point, the spacecraft is about 1.3 miles (2.1 kilometers) above the ground. All eight throttleable retrorockets on the descent stage, called Mars landing engines, begin firing for the powered descent phase. The enginesâ job: to slow the spacecraft, which will be traveling at about 190 mph (306 kph) when itâs at 6,900 feet (2,100 meters) in altitude, to 1.7 mph (2.7 kph) by the time itâs about 66 feet (20 meters) above the surface.

During the latter portion of parachute descent and the early portion of powered descent, Terrain-Relative Navigation kicks in.

Terrain-Relative Navigation is an autopilot that operates during landing and can quickly figure out the spacecraftâs location over the Martian surface and select the best reachable safe landing target. During descent (after the heat shield drops away) a downward-pointing camera aboard the rover takes image after image of the ground rushing up to meet it. The camera feeds the image data into an onboard computer that determines its current position and all reachable landing points. Terrain-Relative Navigation will select the safest available landing target and command the spacecraftâs descent stage to fly the Perseverance rover to that landing point. The system can change the roverâs touchdown point by up to 2,000 feet (600 meters).

When the descent stage determines it is 20 meters over the Terrain-Relative Navigationâs designated landing spot, it initiates the sky crane maneuver: Nylon cords spool out to lower the rover 25 feet (7.6 meters) below the descent stage. When the spacecraft senses the rover has touched down in Jezero Crater, the connecting cords are severed and the descent stage flies away to reach a safe distance. 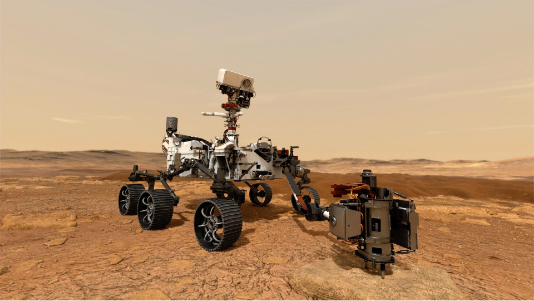 The rover should touch down in the Martian afternoon â about 3:45 p.m. local mean solar time (with the exact time depending on the actual launch day). Soon after, the roverâs computer switches from entry, descent and landing mode to surface mode. This initiates autonomous activities for the first Martian day on the surface of the Red Planet, Sol 0.

Perseveranceâs team will spend the first 90 sols performing tests of all the roverâs parts and science instruments. This âcheckoutâ period ensures everything â including the team â is ready for surface operations. For these 90 sols, the operations team will be working on Mars time, which means they will be setting their clocks to the Martian day (which is about 40 minutes longer than an Earth day). This allows them to respond quickly to any issue the rover has during its workday and make sure revised instructions are ready for the next sol.

The first part of the checkout period is a commissioning phase. In the first 16 sols of commissioning, Perseverance will:

The entire commissioning phase ends about 30 sols after landing, depending on how well the activities go.

Around that time, Perseverance will need to find a flat area to serve as a helipad for the Ingenuity Mars Helicopter. The rover will deploy Ingenuity in the center of this area and drive a safe distance away from it. The helicopterâs team will then have up to 30 sols to perform a series of flight tests on Mars as part of the technology demonstration.

At the end of these experimental helicopter flights, Perseverance will begin its surface operations phase, when the team carries out its ambitious science mission: searching for signs of ancient microbial life, characterizing the climate and geology of Mars, and collecting carefully selected and documented samples for future return to Earth. More on Perseveranceâs science objectives is in the Science section of this press kit.

There will be periods during its one-Martian-year-long mission when the roverâs activities will be limited, such as the approximately 20-sol period in September 2021 when the Sun comes between Mars and Earth, interfering with transmissions between the two planets. To maximize the science being conducted in the time available, the mission team plans operations far ahead and builds in the flexibility to respond to new discoveries as scientists study the data.

More information about the roverâs driving capabilities is available in this story.