Telecommunications:
How Perseverance Talks to Earth 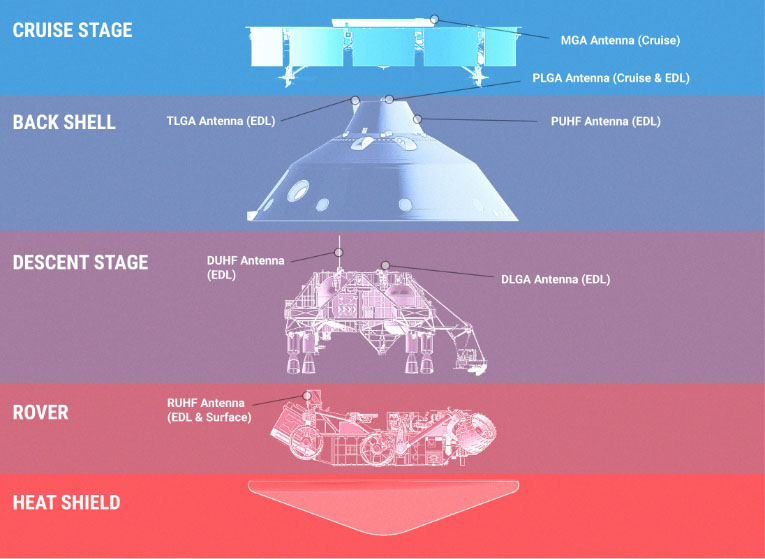 Radio transmissions from the United Launch Alliance Atlas V rocket to NASAâs Tracking and Data Relay Satellite System enable ground controllers to monitor critical events and the status of both the launch vehicle and the Mars 2020 spacecraft that includes Perseverance.

The cruise stage of the Mars 2020 spacecraft will start communicating with the ground between about 70 and 90 minutes after launch, depending on when liftoff actually takes place. The variability is due to how long the spacecraft is in Earthâs shadow for each launch opportunity. Our planetâs shadow blocks light from reaching the spacecraftâs solar panels, which charge batteries that power the communications radio. Mission controllers donât want to turn on the radio while the spacecraft is in shadow because this would draw down the batteries when they canât recharge.

The first ground station of NASAâs Deep Space Network to receive communication from the spacecraft will be Canberra, Australia, followed a short time later by Goldstone in the California desert near Barstow.

For the first two months of the journey to Mars, the spacecraft communicates using a low-gain antenna located on the aeroshellâs parachute cone, which is exposed through the center of the cruise stage.

As the spacecraft gets farther from Earth, a stronger, medium-gain antenna located on the cruise stage takes over. This antenna provides higher data rates but requires more accurate pointing toward Deep Space Network dishes on Earth.

During landing, the spacecraft switches between several antennas, some of which use Ultra-High Frequency (UHF) transmission (for talking with orbiting spacecraft like the Mars Reconnaissance Orbiter, which then relay the information back to Earth) and others that use more powerful X-band transmissions (for talking directly to Earth with simple messages).

UHF
A UHF antenna mounted on the back shell starts transmitting several minutes before atmospheric entry until the shell separates from the descent stage. A UHF antenna on the descent stage takes over from there. For the final release to the surface, the UHF transmissions will use the roverâs cylindrical, UHF low-gain antenna.

Once Perseverance is wheels-down on Mars, it will begin communicating using antennas on its deck. Communication will resume through the cylindrical, UHF low-gain antenna. During surface operations, 99.9% of science data is communicated through this antenna to passing orbiters, including NASAâs MAVEN and Mars Reconnaissance Orbiter, as well as the European Space Agencyâs Trace Gas Orbiter.

Perseverance can also communicate directly with Earth using its X-band high-gain antenna (the rotatable hexagonal âpaddleâ toward the back of the rover). These transmissions are routinely used to send commands to the rover each morning on Mars but are limited in transmitting data back to Earth.

If the views and distance to the Earth are favorable, Perseverance can also use an X-band low-gain antenna (a stubby pole located behind the high-gain antenna). This antenna is useful for emergency communications in a variety of situations.