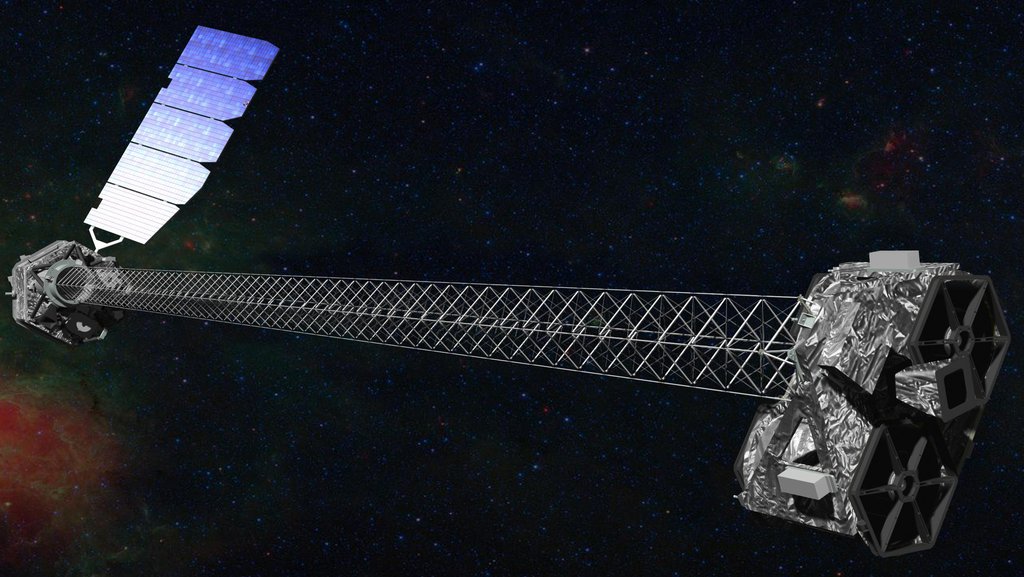 NASA’s NuSTAR space telescope, shown in this illustration, features two main components separated by a 30-foot (10-meter) mast, sometimes called a boom. Light is collected at one end of the mast and is focused along its length before hitting detectors at the other end.

After a decade of observing some of the hottest, densest, and most energetic regions in our universe, this small but powerful space telescope still has more to see.

NASA’s Nuclear Spectroscopic Telescope Array (NuSTAR) is turning 10. Launched on June 13, 2012, this space telescope detects high-energy X-ray light and studies some of the most energetic objects and processes in the universe, from black holes devouring hot gas to the radioactive remains of exploded stars. Here are some of the ways NuSTAR has opened our eyes to the X-ray universe over the last decade.

Different colors of visible light have different wavelengths and different energies; similarly, there is a range of X-ray light, or light waves with higher energies than those human eyes can detect. NuSTAR detects X-rays at the higher end of the range. There aren’t many objects in our solar system that emit the X-rays NuSTAR can detect, but the Sun does: Its high-energy X-rays come from microflares, or small bursts of particles and light on its surface. NuSTAR’s observations contribute to insights about the formation of bigger flares, which can cause harm to astronauts and satellites. These studies could also help scientists explain why the Sun’s outer region, the corona, is many times hotter than its surface. NuSTAR also recently observed high-energy X-rays coming from Jupiter, solving a decades-old mystery about why they’ve gone undetected in the past. 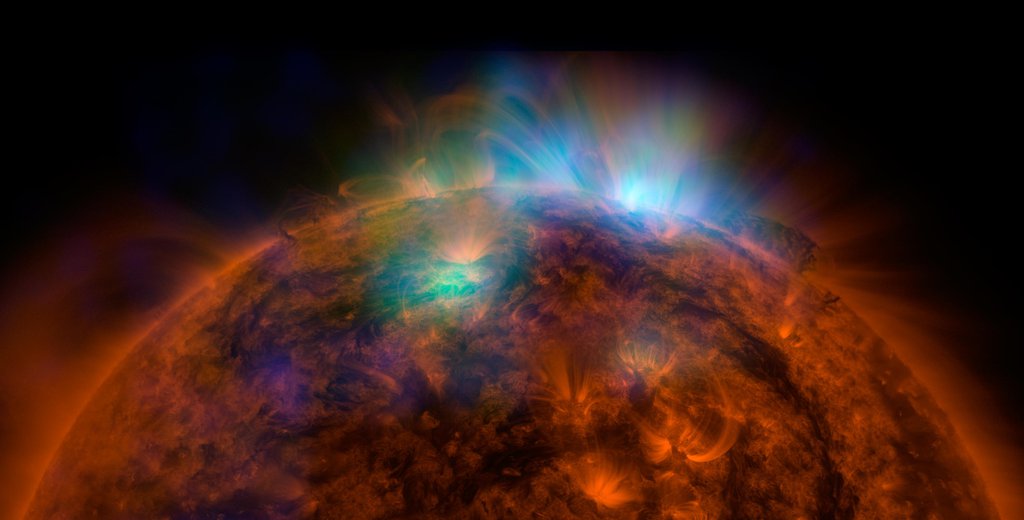 Black holes don’t emit light, but some of the biggest ones we know of are surrounded by disks of hot gas that glow in many different wavelengths of light. NuSTAR can show scientists what’s happening to the material closest to the black hole, revealing how black holes produce bright flares and jets of hot gas that stretch for thousands of light-years into space. The mission has measured temperature variations in black hole winds that influence star formation in the rest of the galaxy. Recently, the Event Horizon Telescope (EHT) took the first-ever direct images of the shadows of black holes, and NuSTAR provided support. Along with other NASA telescopes, NuSTAR monitored the black holes for flares and changes in brightness that would influence EHT’s ability to image the shadow cast by them. 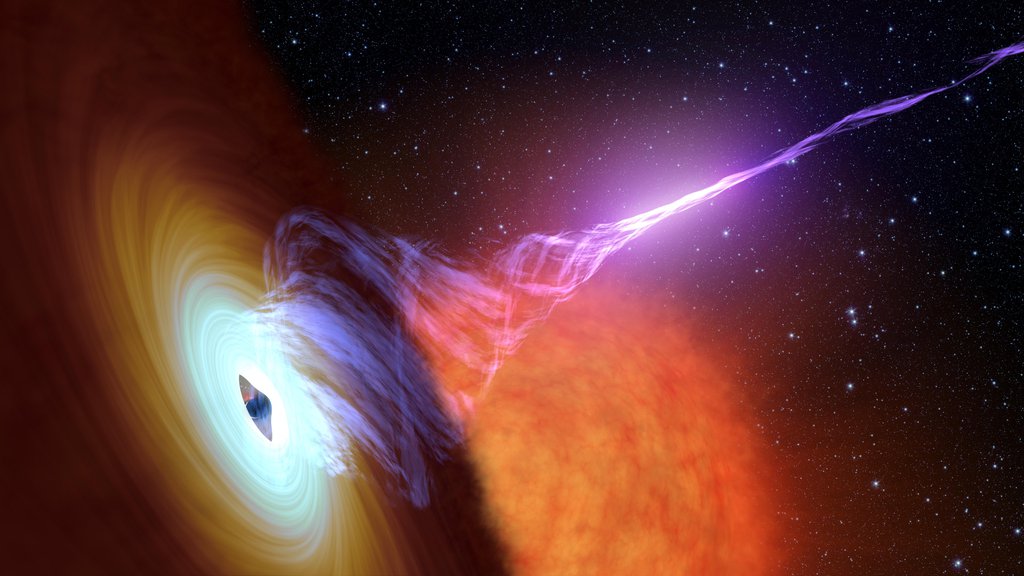 This illustration shows a black hole surrounded by an accretion disk made of hot gas, with a jet extending into space. NASA’s NuSTAR telescope has helped measure how far particles in these jets travel before they “turn on” and become bright sources of light, a distance also known as the “acceleration zone.”

One of NuSTAR’s biggest accomplishments in this arena was making the first unambiguous measurement of a black hole’s spin, which it did in collaboration with the ESA (European Space Agency) XMM-Newton mission. Spin is the degree to which a black hole’s intense gravity warps the space around it, and the measurement helped confirm aspects of Albert Einstein’s theory of general relativity.

NuSTAR has identified dozens of black holes hidden behind thick clouds of gas and dust. Visible light typically can’t penetrate those clouds, but the high-energy X-ray light observed by NuSTAR can. This gives scientists a better estimate of the total number of black holes in the universe. In recent years scientists have used NuSTAR data to find out how these giants become surrounded by such thick clouds, how that process influences their development, and how obscuration relates to a black hole’s impact on the surrounding galaxy.

Revealing the Power of ‘Undead’ Stars

NuSTAR is a kind of zombie hunter: It’s deft at finding the undead corpses of stars. Known as neutron stars, these are dense nuggets of material left over after a massive star runs out of fuel and collapses. Though neutron stars are typically only the size of a large city, they are so dense that a teaspoon of one would weigh about a billion tons on Earth. Their density, combined with their powerful magnetic fields, makes these objects extremely energetic: One neutron star located in the galaxy M82 beams with the energy of 10 million Suns. 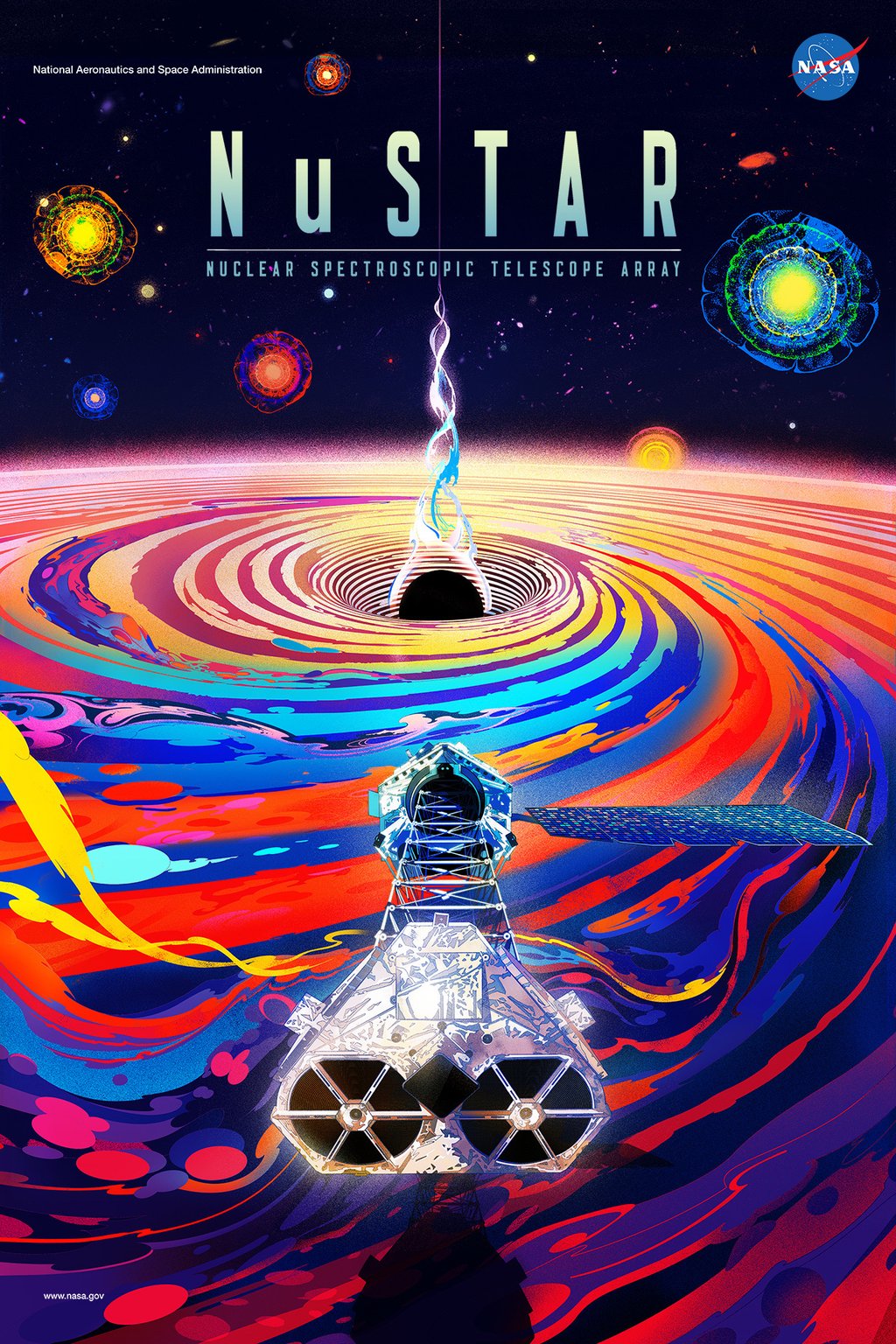 NuSTAR is the first space telescope able to focus high-energy X-rays. This colorful poster was made in celebration of the mission’s 10-year anniversary. Download it for free here.

Without NuSTAR, scientists wouldn’t have discovered just how energetic neutron stars can be. When the object in M82 was discovered, researchers thought that only a black hole could generate so much power from such a small area. NuSTAR was able to confirm the object’s true identity by detecting pulsations from the star’s rotation – and has since shown that many of these ultraluminous X-ray sources, previously thought to be black holes, are in fact neutron stars. Knowing how much energy these can produce has helped scientists better understand their physical properties, which are unlike anything found in our solar system.

During their lives, stars are mostly spherical, but NuSTAR observations have shown that when they explode as supernovae, they become an asymmetrical mess. The space telescope solved a major mystery in the study of supernovae by mapping the radioactive material left over by two stellar explosions, tracing the shape of the debris and in both cases revealing significant deviations from a spherical shape. Because of NuSTAR’s X-ray vision, astronomers now have clues about what happens in an environment that would be almost impossible to probe directly. The NuSTAR observations suggest that the inner regions of a star are extremely turbulent at the time of detonation.

NuSTAR launched on June 13, 2012. The mission’s principal investigator is Fiona Harrison, chair of the Division of Physics, Mathematics, and Astronomy at Caltech in Pasadena, California. A Small Explorer mission managed by the agency’s Jet Propulsion Laboratory in Southern California for NASA’s Science Mission Directorate in Washington, NuSTAR was developed in partnership with the Danish Technical University (DTU) and the Italian Space Agency (ASI). The telescope optics were built by Columbia University, NASA’s Goddard Space Flight Center in Greenbelt, Maryland, and DTU. The spacecraft was built by Orbital Sciences Corp. in Dulles, Virginia. NuSTAR’s mission operations center is at the University of California, Berkeley, and the official data archive is at NASA’s High Energy Astrophysics Science Archive Research Center. ASI provides the mission’s ground station and a mirror data archive. Caltech manages JPL for NASA.