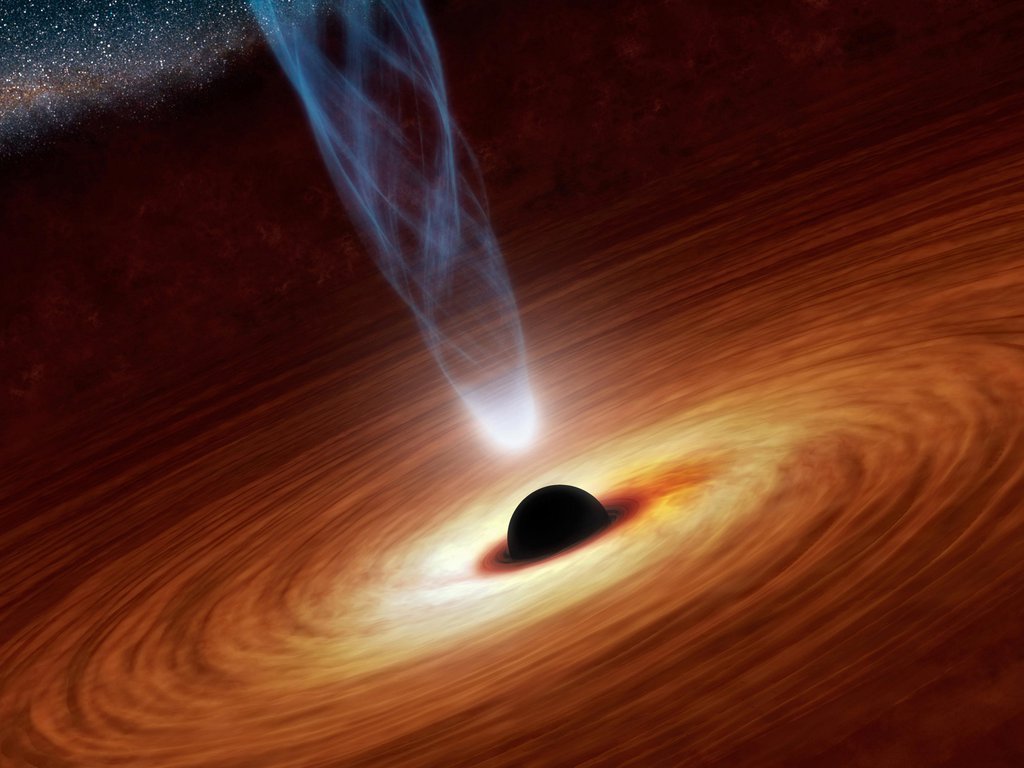 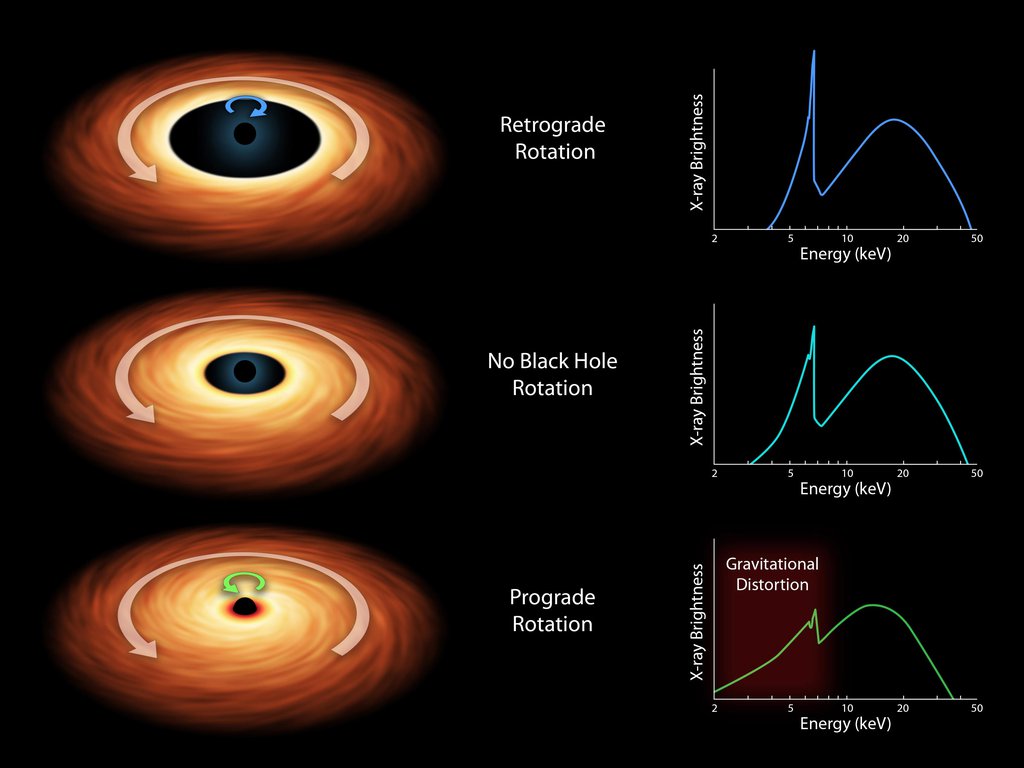 Black holes are tremendous objects whose immense gravity can distort and twist space-time, the fabric that shapes our universe.› Full image and caption
Credit: NASA/JPL-Caltech 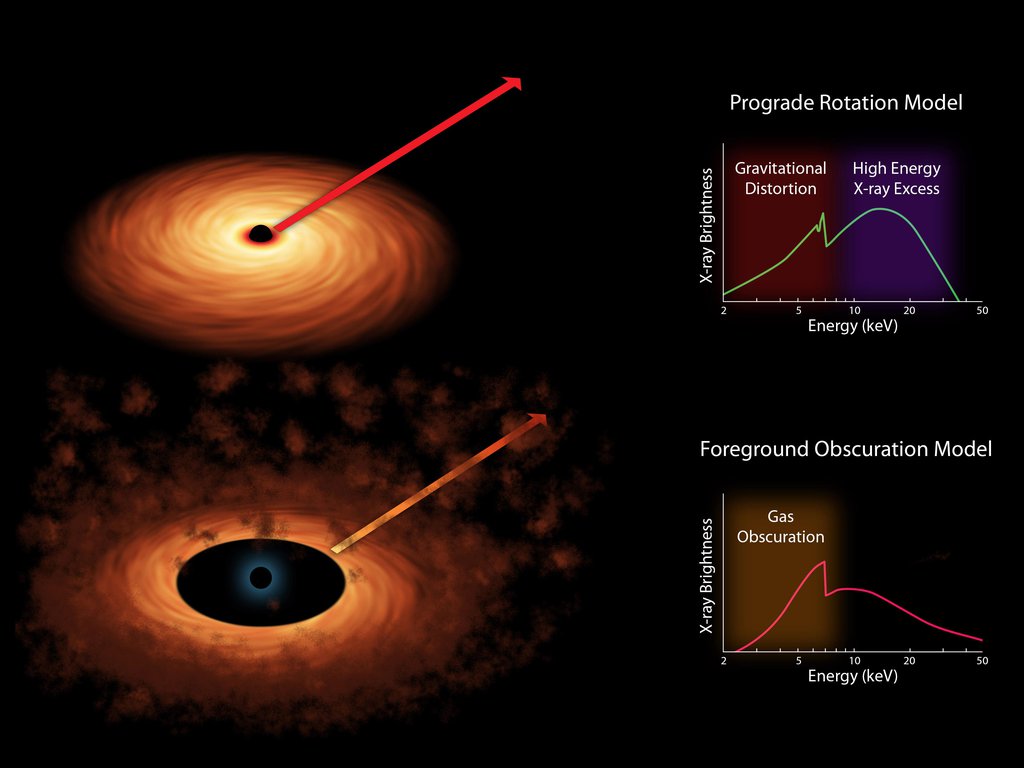 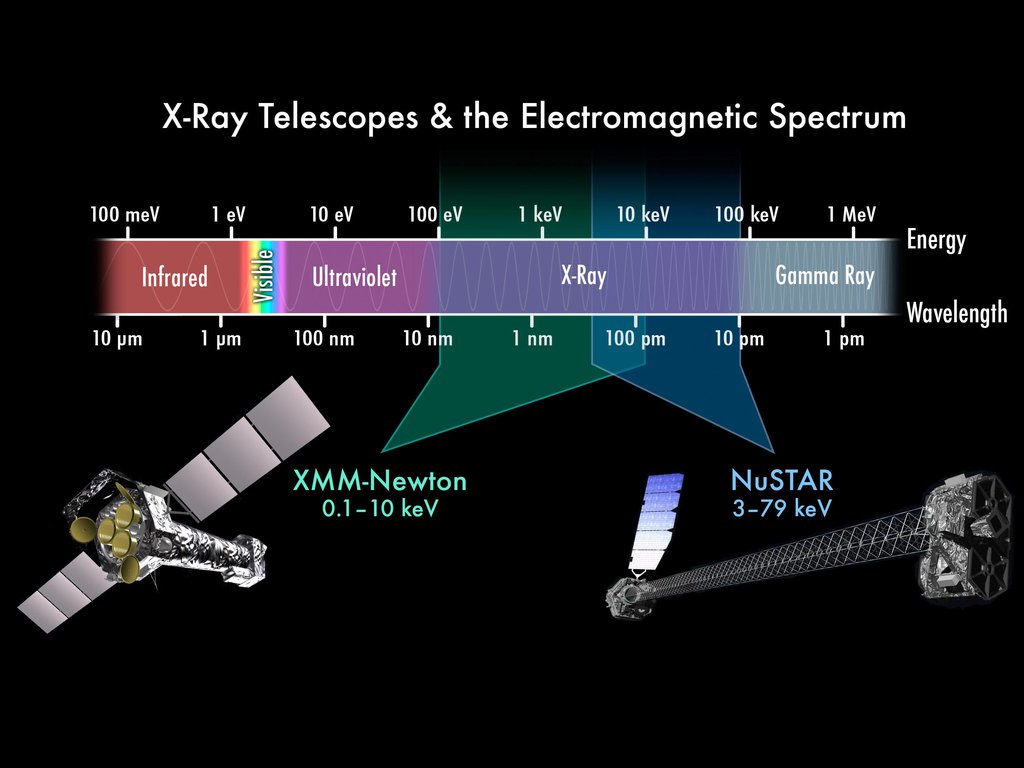 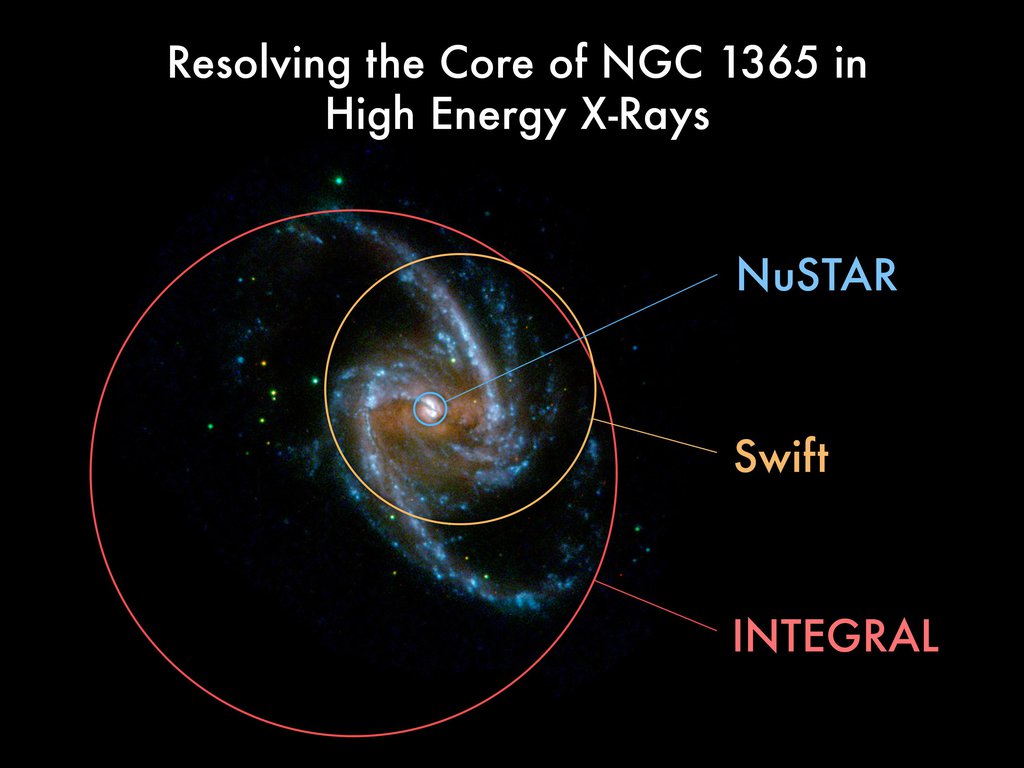 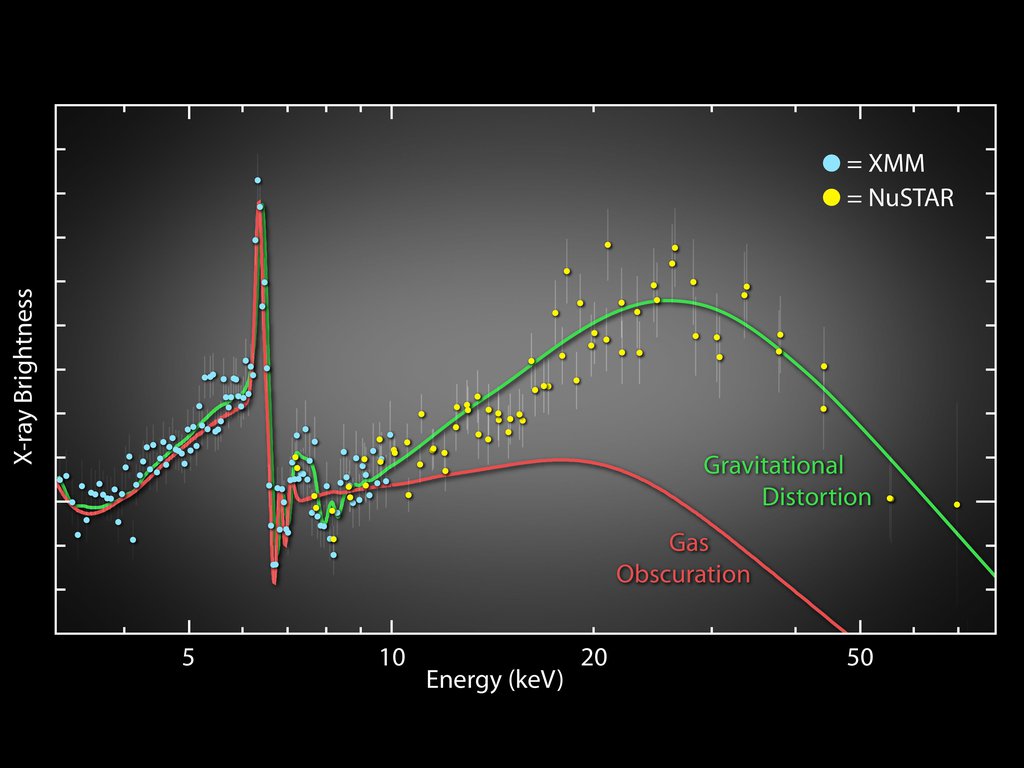 NASA's Nuclear Spectroscopic Telescope Array, or NuSTAR, has helped to show, for the first time, that the spin rates of black holes can be measured conclusively.› Full image and caption
Credit: NASA/JPL-Caltech/ESA/CfA/INAF

Two X-ray space observatories have measured definitively, for the first time, the spin rate of a black hole with a mass 2 million times that of our sun.

PASADENA, Calif. -- Two X-ray space observatories, NASA's Nuclear Spectroscopic Telescope Array (NuSTAR) and the European Space Agency's XMM-Newton, have teamed up to measure definitively, for the first time, the spin rate of a black hole with a mass 2 million times that of our sun.

The supermassive black hole lies at the dust- and gas-filled heart of a galaxy called NGC 1365, and it is spinning almost as fast as Einstein's theory of gravity will allow. The findings, which appear in a new study in the journal Nature, resolve a long-standing debate about similar measurements in other black holes and will lead to a better understanding of how black holes and galaxies evolve.

"This is hugely important to the field of black hole science," said Lou Kaluzienski, a NuSTAR program scientist at NASA Headquarters in Washington.

The observations also are a powerful test of Einstein's theory of general relativity, which says gravity can bend space-time, the fabric that shapes our universe, and the light that travels through it.

"We can trace matter as it swirls into a black hole using X-rays emitted from regions very close to the black hole," said the coauthor of a new study, NuSTAR principal investigator Fiona Harrison of the California Institute of Technology in Pasadena. "The radiation we see is warped and distorted by the motions of particles and the black hole's incredibly strong gravity."

NuSTAR, an Explorer-class mission launched in June 2012, is designed to detect the highest-energy X-ray light in great detail. It complements telescopes that observe lower-energy X-ray light, such as XMM-Newton and NASA's Chandra X-ray Observatory. Scientists use these and other telescopes to estimate the rates at which black holes spin.

Until now, these measurements were not certain because clouds of gas could have been obscuring the black holes and confusing the results. With help from XMM-Newton, NuSTAR was able to see a broader range of X-ray energies and penetrate deeper into the region around the black hole. The new data demonstrate that X-rays are not being warped by the clouds, but by the tremendous gravity of the black hole. This proves that spin rates of supermassive black holes can be determined conclusively.

"If I could have added one instrument to XMM-Newton, it would have been a telescope like NuSTAR," said Norbert Schartel, XMM-Newton Project Scientist at the European Space Astronomy Center in Madrid. "The high-energy X-rays provided an essential missing puzzle piece for solving this problem."

Measuring the spin of a supermassive black hole is fundamental to understanding its past history and that of its host galaxy.

"These monsters, with masses from millions to billions of times that of the sun, are formed as small seeds in the early universe and grow by swallowing stars and gas in their host galaxies, merging with other giant black holes when galaxies collide, or both," said the study's lead author, Guido Risaliti of the Harvard-Smithsonian Center for Astrophysics in Cambridge, Mass., and the Italian National Institute for Astrophysics.

Astronomers look for these warping effects by analyzing X-ray light emitted by iron circulating in the accretion disk. In the new study, they used both XMM-Newton and NuSTAR to simultaneously observe the black hole in NGC 1365. While XMM-Newton revealed that light from the iron was being warped, NuSTAR proved that this distortion was coming from the gravity of the black hole and not gas clouds in the vicinity. NuSTAR's higher-energy X-ray data showed that the iron was so close to the black hole that its gravity must be causing the warping effects.

With the possibility of obscuring clouds ruled out, scientists can now use the distortions in the iron signature to measure the black hole's spin rate. The findings apply to several other black holes as well, removing the uncertainty in the previously measured spin rates.