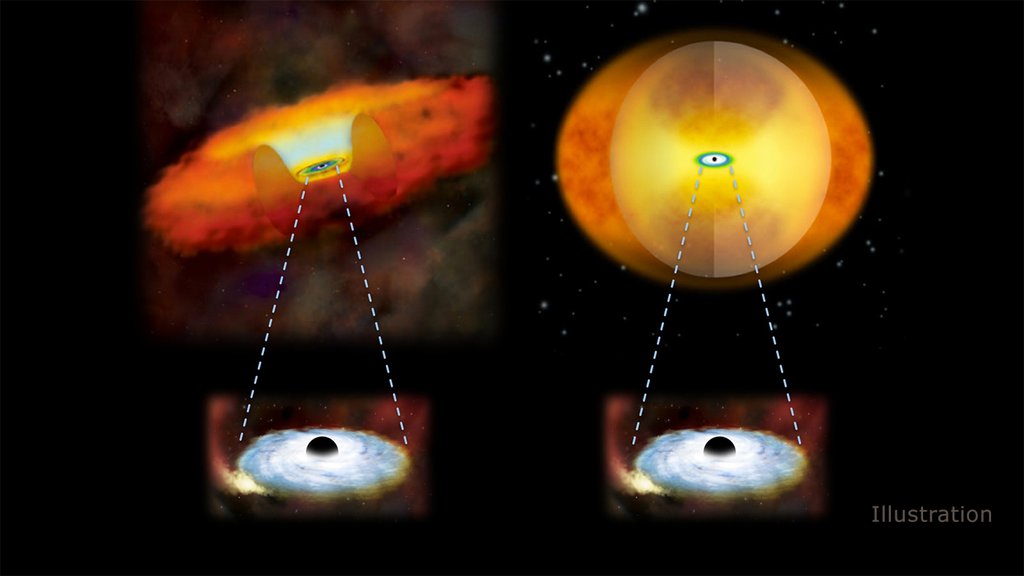 Galaxies that are far along in the merging process are completely covered in a cocoon of gas and dust, a study using NuSTAR finds.

Black holes get a bad rap in popular culture for swallowing everything in their environments. In reality, stars, gas and dust can orbit black holes for long periods of time, until a major disruption pushes the material in.

A merger of two galaxies is one such disruption. As the galaxies combine and their central black holes approach each other, gas and dust in the vicinity are pushed onto their respective black holes. An enormous amount of high-energy radiation is released as material spirals rapidly toward the hungry black hole, which becomes what astronomers call an active galactic nucleus (AGN).

A study using NASA's NuSTAR telescope shows that in the late stages of galaxy mergers, so much gas and dust falls toward a black hole that the extremely bright AGN is enshrouded. The combined effect of the gravity of the two galaxies slows the rotational speeds of gas and dust that would otherwise be orbiting freely. This loss of energy makes the material fall onto the black hole.

"The further along the merger is, the more enshrouded the AGN will be," said Claudio Ricci, lead author of the study published in the Monthly Notices Royal Astronomical Society. "Galaxies that are far along in the merging process are completely covered in a cocoon of gas and dust."

Ricci and colleagues observed the penetrating high-energy X-ray emission from 52 galaxies. About half of them were in the later stages of merging. Because NuSTAR is very sensitive to detecting the highest-energy X-rays, it was critical in establishing how much light escapes the sphere of gas and dust covering an AGN.

The study was published in the Monthly Notices of the Royal Astronomical Society. Researchers compared NuSTAR observations of the galaxies with data from NASA's Swift and Chandra and ESA's XMM-Newton observatories, which look at lower energy components of the X-ray spectrum. If high-energy X-rays are detected from a galaxy, but low-energy X-rays are not, that is a sign that an AGN is heavily obscured.

The study helps confirm the longstanding idea that an AGN's black hole does most of its eating while enshrouded during the late stages of a merger.

"A supermassive black hole grows rapidly during these mergers," Ricci said. "The results further our understanding of the mysterious origins of the relationship between a black hole and its host galaxy."

NuSTAR is a Small Explorer mission led by Caltech and managed by NASA's Jet Propulsion Laboratory for NASA's Science Mission Directorate in Washington. NuSTAR was developed in partnership with the Danish Technical University and the Italian Space Agency (ASI). The spacecraft was built by Orbital Sciences Corp., Dulles, Virginia. NuSTAR's mission operations center is at UC Berkeley, and the official data archive is at NASA's High Energy Astrophysics Science Archive Research Center. ASI provides the mission's ground station and a mirror archive. JPL is managed by Caltech for NASA.