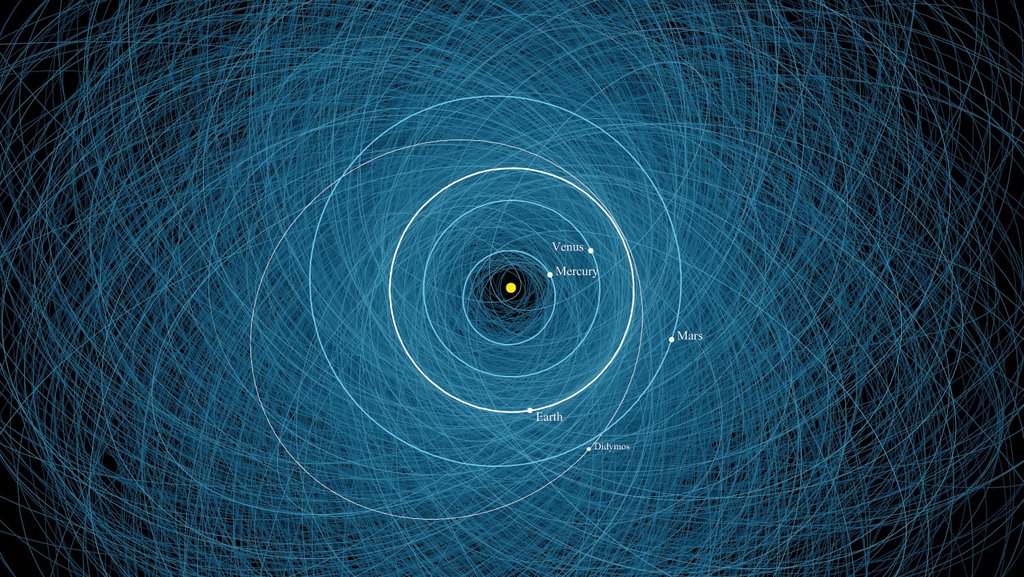 This diagram shows the orbits of 2,200 potentially hazardous objects as calculated by JPL’s Center for Near Earth Object Studies (CNEOS). Highlighted is the orbit of the double asteroid Didymos, the target of NASA’s Double Asteroid Redirect Test (DART) mission.

The new system improves the capabilities of NASA JPL’s Center for Near Earth Object Studies to assess the impact risk of asteroids that can come close to our planet.

To date, nearly 28,000 near-Earth asteroids (NEAs) have been found by survey telescopes that continually scan the night sky, adding new discoveries at a rate of about 3,000 per year. But as larger and more advanced survey telescopes turbocharge the search over the next few years, a rapid uptick in discoveries is expected. In anticipation of this increase, NASA astronomers have developed a next-generation impact monitoring algorithm called Sentry-II to better evaluate NEA impact probabilities.

Popular culture often depicts asteroids as chaotic objects that zoom haphazardly around our solar system, changing course unpredictably and threatening our planet without a moment’s notice. This is not the reality. Asteroids are extremely predictable celestial bodies that obey the laws of physics and follow knowable orbital paths around the Sun.

But sometimes, those paths can come very close to Earth’s future position and, because of small uncertainties in the asteroids’ positions, a future Earth impact cannot be completely ruled out. So, astronomers use sophisticated impact monitoring software to automatically calculate the impact risk.

“The first version of Sentry was a very capable system that was in operation for almost 20 years,” said Javier Roa Vicens, who led the development of Sentry-II while working at JPL as a navigation engineer and recently moved to SpaceX. “It was based on some very smart mathematics: In under an hour, you could reliably get the impact probability for a newly discovered asteroid over the next 100 years – an incredible feat.”

But with Sentry-II, NASA has a tool that can rapidly calculate impact probabilities for all known NEAs, including some special cases not captured by the original Sentry. Sentry-II reports the objects of most risk in the CNEOS Sentry Table.

By systematically calculating impact probabilities in this new way, the researchers have made the impact monitoring system more robust, enabling NASA to confidently assess all potential impacts with odds as low as a few chances in 10 million.

As an asteroid travels through the solar system, the Sun’s gravitational pull dictates the path of its orbit, and the gravity of the planets will also tug at its trajectory in predictable ways. Sentry modeled to a high precision how these gravitational forces shaped an asteroid’s orbit, helping to predict where it will be far into the future. But it couldn’t account for non-gravitational forces, the most significant being the thermal forces caused by the Sun’s heat.

As an asteroid spins, sunlight heats the object’s dayside. The heated surface will then rotate to the asteroid’s shaded nightside and cool down. Infrared energy is released as it cools, generating a tiny yet continual thrust on the asteroid. This phenomenon is known as the Yarkovsky effect, which has little influence on the asteroid’s motion over short periods but can significantly change its path over decades and centuries.

This video explains how asteroid Bennu’s orbit around the Sun was determined by considering gravitational and non-gravitational forces, helping scientists understand how the asteroid’s trajectory will change over time.

“The fact that Sentry couldn’t automatically handle the Yarkovsky effect was a limitation,” said Davide Farnocchia, a navigation engineer at JPL who also helped develop Sentry-II. “Every time we came across a special case – like asteroids Apophis, Bennu, or 1950 DA – we had to do complex and time-consuming manual analyses. With Sentry-II, we don’t have to do that anymore.”

Another issue with the original Sentry algorithm was that it sometimes couldn’t accurately predict the impact probability of asteroids that undergo extremely close encounters with Earth. The motion of these NEAs gets significantly deflected by our planet’s gravity, and the post-encounter orbital uncertainties can grow dramatically. In those cases, the old Sentry’s calculations could fail, requiring manual intervention. Sentry-II doesn’t have that limitation.

“In terms of numbers, the special cases we’d find were a very tiny fraction of all the NEAs that we’d calculate impact probabilities for,” said Roa Vicens. “But we are going to discover many more of these special cases when NASA’s planned NEO Surveyor mission and the Vera C. Rubin Observatory in Chile go online, so we need to be prepared.”

Many Needles, One Haystack

To assess whether an impact is possible and narrow down where the true orbit may be, the original Sentry would make some assumptions as to how the uncertainty region may evolve. It would then select a set of evenly spaced points along a line spanning the uncertainty region. Each point represented a slightly different possible current location of the asteroid.

Sentry would then wind the clock forward, watch those “virtual asteroids” orbit the Sun, and see if any came near Earth in the future. If so, further calculations would be required to “zoom in” to see whether any intermediate points might impact Earth, and if they did, estimate the impact probability.

This animation shows an example of how the uncertainties in a near-Earth asteroid’s orbit can evolve with time. After such an asteroid’s close encounter with Earth, the uncertainty region becomes larger, making the possibility of future impacts more challenging to assess.

This way, the orbital determination calculations aren’t shaped by predetermined assumptions about which portions of the uncertainty region might lead to a possible impact. This allows Sentry-II to zero in on more very low probability impact scenarios, some of which Sentry may have missed.

Farnocchia likens the process to searching for needles in a haystack: The needles are possible impact scenarios, and the haystack is the uncertainty region. The more the uncertainty in an asteroid’s position, the bigger the haystack. Sentry would randomly poke at the haystack thousands of times looking for needles located near a single line stretching through the haystack. The assumption was that following this line was the best way of searching for needles. But Sentry-II assumes no line and instead throws thousands of tiny magnets randomly all over that haystack, which quickly get attracted to, and then find, the nearby needles.

“Sentry-II is a fantastic advancement in finding tiny impact probabilities for a huge range of scenarios,” said Steve Chesley, senior research scientist at JPL, who led the development of Sentry and collaborated on Sentry-II. “When the consequences of a future asteroid impact are so big, it pays to find even the smallest impact risk hiding in the data.”

A study describing Sentry-II was published in the Astronomical Journal on Dec. 1, 2021.

For more information about PDCO, visit:

Earth Is Safe From Asteroid Apophis for 100-Plus Years
Classroom Activity: Model An Asteroid
Math Rocks: A Lesson in Asteroid Dynamics
Video: How Does NASA Spot a Near-Earth Asteroid?