NASA Analysis: Earth Is Safe From Asteroid Apophis for 100-Plus Years

The near-Earth object was thought to pose a slight risk of impacting Earth in 2068, but now radar observations have ruled that out.

After its discovery in 2004, asteroid 99942 Apophis had been identified as one of the most hazardous asteroids that could impact Earth. But that impact assessment changed as astronomers tracked Apophis and its orbit became better determined.

Now, the results from a new radar observation campaign combined with precise orbit analysis have helped astronomers conclude that there is no risk of Apophis impacting our planet for at least a century.

Estimated to be about 1,100 feet (340 meters) across, Apophis quickly gained notoriety as an asteroid that could pose a serious threat to Earth when astronomers predicted that it would come uncomfortably close in 2029. Thanks to additional observations of the near-Earth object (NEO), the risk of an impact in 2029 was later ruled out, as was the potential impact risk posed by another close approach in 2036. Until this month, however, a small chance of impact in 2068 still remained.
When Apophis made a distant flyby of Earth around March 5, astronomers took the opportunity to use powerful radar observations to refine the estimate of its orbit around the Sun with extreme precision, enabling them to confidently rule out any impact risk in 2068 and long after.

This animation depicts the orbital trajectory of asteroid 99942 Apophis as it zooms safely past Earth on April 13, 2029. Earth’s gravity will slightly deflect the trajectory as the 1,100-foot-wide (340-meter-wide) near-Earth object comes within 20,000 miles (32,000 kilometers) of our planet’s surface. The motion has been speeded up 2,000 times.

“A 2068 impact is not in the realm of possibility anymore, and our calculations don’t show any impact risk for at least the next 100 years,” said Davide Farnocchia of NASA’s Center for Near-Earth Object Studies (CNEOS), which is managed by NASA’s Jet Propulsion Laboratory in Southern California. “With the support of recent optical observations and additional radar observations, the uncertainty in Apophis’ orbit has collapsed from hundreds of kilometers to just a handful of kilometers when projected to 2029. This greatly improved knowledge of its position in 2029 provides more certainty of its future motion, so we can now remove Apophis from the risk list.”

Farnocchia was referring to the Sentry Impact Risk Table. Maintained by CNEOS, the table keeps tabs on the few asteroids whose orbits take them so close to Earth that an impact can’t be ruled out. With the recent findings, the Risk Table no longer includes Apophis.

These images of asteroid Apophis were recorded by radio antennas at the Deep Space Network’s Goldstone complex in California and the Green Bank Telescope in West Virginia. The asteroid was 10.6 million miles (17 million kilometers) away, and each pixel has a resolution of 127 feet (38.75 meters). Credit: NASA/JPL-Caltech and NSF/AUI/GBO

To arrive at the latest Apophis calculations, astronomers turned to the 70-meter (230-foot) radio antenna at the Deep Space Network’s Goldstone Deep Space Communications Complex near Barstow, California, to precisely track Apophis’ motion. “Although Apophis made a recent close approach with Earth, it was still nearly 10.6 million miles [17 million kilometers] away. Even so, we were able to acquire incredibly precise information about its distance to an accuracy of about 150 meters [490 feet],” said JPL scientist Marina Brozovic, who led the radar campaign. “This campaign not only helped us rule out any impact risk, it set us up for a wonderful science opportunity.”

Goldstone also worked in a collaboration with the 100-meter (330-foot) Green Bank Telescope in West Virginia in order to enable imaging of Apophis; Goldstone was transmitting while Green Bank was receiving – a “bistatic” experiment that doubled the strength of the received signal.

Although the radar imagery of Apophis appears pixelated, the images have a resolution of 38.75 meters (127 feet) per pixel, “which is a remarkable resolution, considering the asteroid was 17 million kilometers away, or about 44 times the Earth-Moon distance,” added Brozovic. “If we had binoculars as powerful as this radar, we would be able to sit in Los Angeles and read a dinner menu at a restaurant in New York.”

As the radar team further analyzes their data, they also hope to learn more about the asteroid’s shape. Previous radar observations have suggested that Apophis has a “bilobed,” or peanutlike, appearance. This is a relatively common shape among the near-Earth asteroids larger than 660 feet (200 meters) in diameter; at least one in six have two lobes.

Astronomers are also working to develop a better understanding of the asteroid’s rotation rate and the axis it spins around (known as its spin state). That knowledge will enable them to determine the orientation the asteroid will have with Earth as it encounters our planet’s gravitational field in 2029, which could change that spin state and even cause “asteroid quakes.”

On April 13, 2029, the asteroid Apophis will pass less than 20,000 miles (32,000 kilometers) from our planet’s surface – closer than the distance of geosynchronous satellites. During that 2029 close approach, Apophis will be visible to observers on the ground in the Eastern Hemisphere without the aid of a telescope or binoculars. It’s also an unprecedented opportunity for astronomers to get a close-up view of a solar system relic that is now just a scientific curiosity and not an immediate hazard to our planet.

“When I started working with asteroids after college, Apophis was the poster child for hazardous asteroids,” said Farnocchia. “There’s a certain sense of satisfaction to see it removed from the risk list, and we’re looking forward to the science we might uncover during its close approach in 2029.” 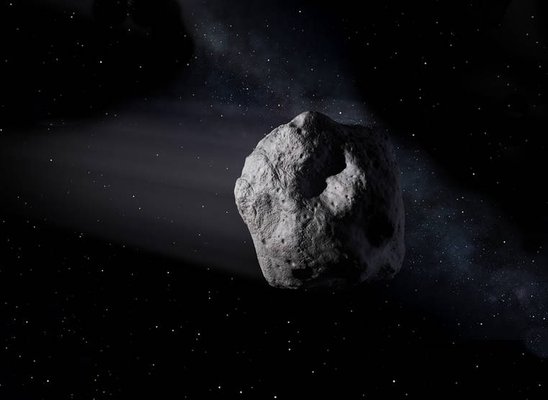