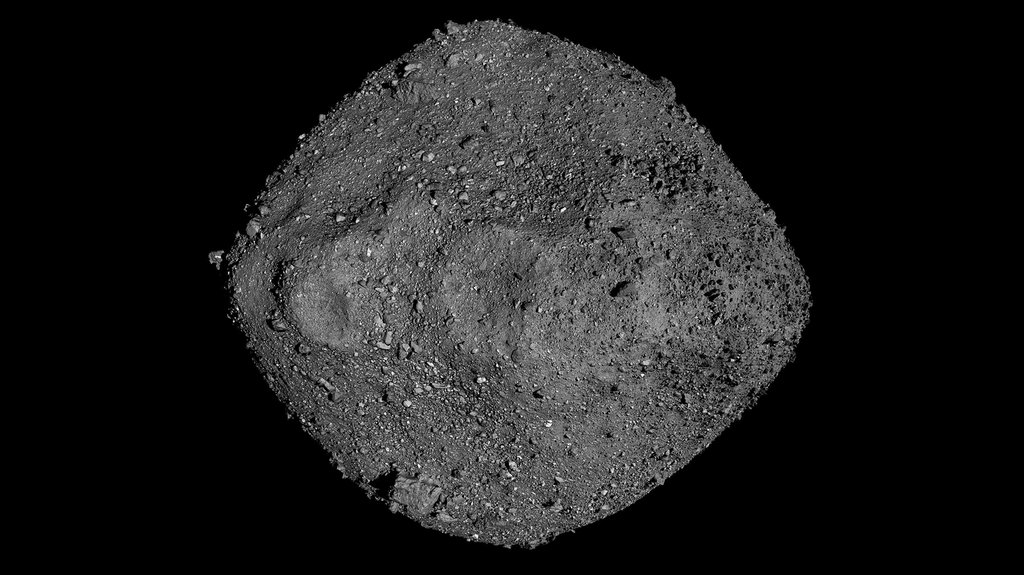 This mosaic of Bennu was created using observations made by NASA’s OSIRIS-REx spacecraft that was in close proximity to the asteroid for over two years.

Along with collecting a sample from the Bennu’s surface, the spacecraft provided precision data to better predict the near-Earth object’s orbit around the Sun.

The study, titled “Ephemeris and hazard assessment for near-Earth asteroid (101955) Bennu based on OSIRIS-REx data,” was published in the journal Icarus.

“NASA’s Planetary Defense mission is to find and monitor asteroids and comets that can come near Earth and may pose a hazard to our planet,” said Kelly Fast, program manager for the Near-Earth Object Observations Program at NASA Headquarters in Washington. “We carry out this endeavor through continuing astronomical surveys that collect data to discover previously unknown objects and refine our orbital models for them. The OSIRIS-REx mission has provided an extraordinary opportunity to refine and test these models, helping us better predict where Bennu will be when it makes its close approach to Earth more than a century from now.”

In 2135, asteroid Bennu will make a close approach with Earth. Although the near-Earth object will not pose a danger to our planet at that time, scientists must understand Bennu’s exact trajectory during that encounter in order to predict how Earth’s gravity will alter the asteroid’s path around the Sun – and affect the hazard of Earth impact.

This video explains how OSIRIS-REx data was used to precisely determine asteroid Bennu’s orbit around the Sun, helping scientists understand how Earth’s gravity will affect the asteroid’s trajectory when it makes a close approach in 2135.

Using NASA’s Deep Space Network and state-of-the-art computer models, scientists were able to significantly shrink uncertainties in Bennu’s orbit, determining its total impact probability through the year 2300 is about 1 in 1,750 (or 0.057%). The researchers were also able to identify Sept. 24, 2182, as the most significant single date in terms of a potential impact, with an impact probability of 1 in 2,700 (or about 0.037%).

Although the chances of it hitting Earth are very low, Bennu remains one of the two most hazardous known asteroids in our solar system, along with another asteroid called 1950 DA.

Before leaving Bennu May 10, 2021, OSIRIS-REx spent more than two years in close proximity to the asteroid, gathering information about its size (it is about one-third of a mile, or 500 meters, wide), shape, mass, and composition, while monitoring its spin and orbital trajectory. The spacecraft also scooped up a sample of rock and dust from the asteroid’s surface, which it will deliver to Earth on Sept. 24, 2023, for further scientific investigation.

“The OSIRIS-REx data give us so much more precise information, we can test the limits of our models and calculate the future trajectory of Bennu to a very high degree of certainty through 2135,” said study lead Davide Farnocchia, of the Center for Near-Earth Object Studies (CNEOS), which is managed by NASA’s Jet Propulsion Laboratory in Southern California. “We’ve never modeled an asteroid’s trajectory to this precision before.”

The precision measurements on Bennu help to better determine how the asteroid’s orbit will evolve over time and whether it will pass through a “gravitational keyhole” during its 2135 close approach. These keyholes are areas in space that would set Bennu on a path toward a future impact with Earth if the asteroid were to pass through them at certain times, due to the effect of Earth’s gravitational pull.

To calculate exactly where the asteroid will be during its 2135 close approach – and whether it might pass through a gravitational keyhole – Farnocchia and his team evaluated various types of small forces that may affect the asteroid as it orbits the Sun. Even the smallest force can significantly deflect its orbital path over time, causing it to pass through or completely miss a keyhole.

Among those forces, the Sun’s heat plays a crucial role. As an asteroid travels around the Sun, sunlight heats up its dayside. Because the asteroid spins, the heated surface will rotate away and cool down when it enters the nightside. As it cools, the surface releases infrared energy, which generates a small amount of thrust on the asteroid – a phenomenon called the Yarkovsky effect. Over short timeframes, this thrust is minuscule, but over long periods, the effect on the asteroid’s position builds up and can play a significant role in changing an asteroid’s path.

“The Yarkovsky effect will act on all asteroids of all sizes, and while it has been measured for a small fraction of the asteroid population from afar, OSIRIS-REx gave us the first opportunity to measure it in detail as Bennu traveled around the Sun,” said Steve Chesley, senior research scientist at JPL and study co-investigator. “The effect on Bennu is equivalent to the weight of three grapes constantly acting on the asteroid – tiny, yes, but significant when determining Bennu’s future impact chances over the decades and centuries to come.”

Click on this interactive visualization of asteroid Bennu and take it for a spin. The “HD” button in the lower right offers for more detailed textures. The full interactive experience is at Eyes on the Solar System.

The team considered many other perturbing forces as well, including the gravity of the Sun, the planets, their moons, and more than 300 other asteroids, the drag caused by interplanetary dust, the pressure of the solar wind, and Bennu’s particle-ejection events. The researchers even evaluated the force OSIRIS-REx exerted when performing its Touch-And-Go (TAG) sample collection event Oct. 20, 2020, to see if it might have slightly altered Bennu’s orbit, ultimately confirming previous estimates that the TAG event had a negligible effect.

“The force exerted on Bennu’s surface during the TAG event were tiny even in comparison to the effects of other small forces considered,” said Rich Burns, OSIRIS-REx project manager at NASA’s Goddard Space Flight Center in Greenbelt, Maryland. “TAG did not alter Bennu’s likelihood of impacting Earth.”

Although a 0.057% impact probability through the year 2300 and an impact probability of 0.037% on Sept. 24, 2182, are low, this study highlights the crucial role that OSIRIS-REx operations played in precisely characterizing Bennu’s orbit.

“The orbital data from this mission helped us better appreciate Bennu’s impact chances over the next couple of centuries and our overall understanding of potentially hazardous asteroids – an incredible result,” said Dante Lauretta, OSIRIS-REx principal investigator and professor at the University of Arizona. “The spacecraft is now returning home, carrying a precious sample from this fascinating ancient object that will help us better understand not only the history of the solar system but also the role of sunlight in altering Bennu’s orbit since we will measure the asteroid’s thermal properties at unprecedented scales in laboratories on Earth.”

Goddard provides overall mission management, systems engineering and the safety and mission assurance for OSIRIS-REx. Lauretta is the principal investigator, and the University of Arizona also leads the science team and the mission's science observation planning and data processing. Lockheed Martin Space Systems in Denver built the spacecraft and is providing flight operations. Goddard and KinetX Aerospace in Tempe, Arizona, are responsible for navigating the OSIRIS-REx spacecraft. OSIRIS-REx is the third mission in NASA's New Frontiers Program. NASA's Marshall Space Flight Center in Huntsville, Alabama, manages the agency's New Frontiers Program for the agency’s Science Mission Directorate in Washington.

For more information about the OSIRIS-REx mission, visit:

To view the images discussed during today’s media teleconference, visit: