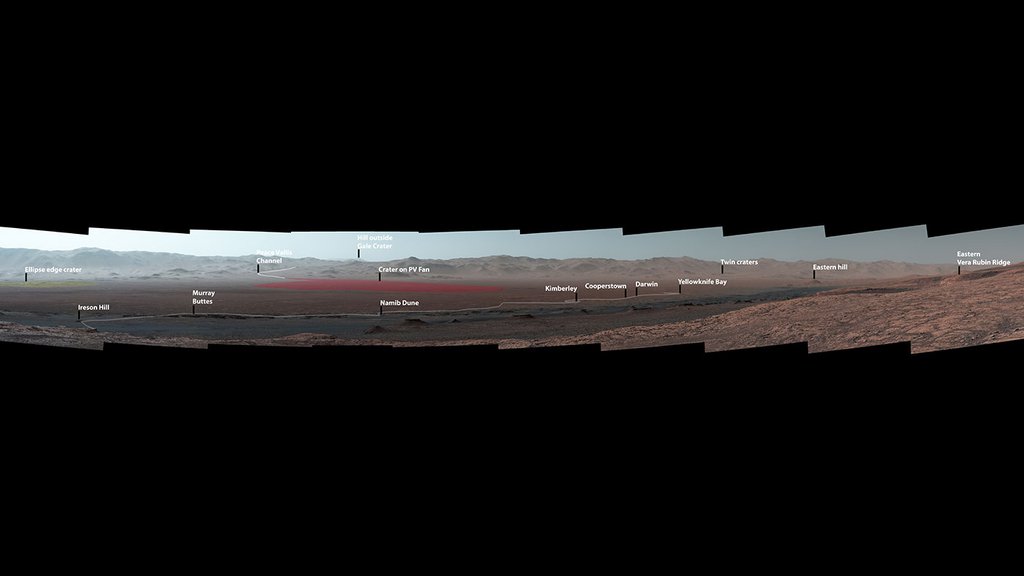 Climbing "Vera Rubin Ridge" provided NASA's Curiosity Mars rover this vista of the interior and rim of Gale Crater, including much of the rover's route since its 2012 landing and features up to about 50 miles away. The left-eye camera of the rover's Mastcam took the component images Oct. 25, 2017.› Full image and caption
Credit: NASA/JPL-Caltech/MSSS 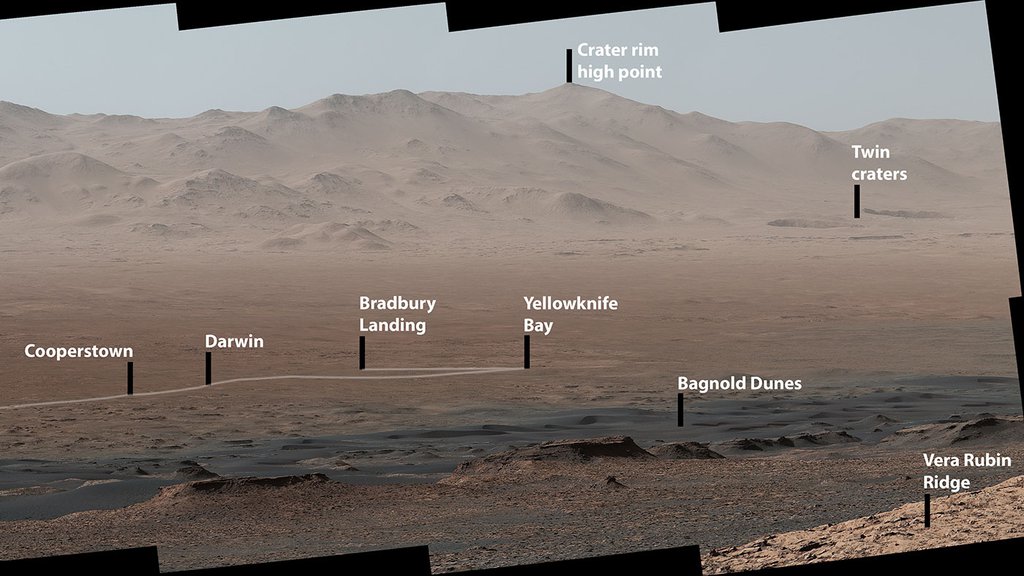 A viewpoint on "Vera Rubin Ridge" provided NASA's Curiosity Mars rover this detailed look back over the area where it began its mission inside Gale Crater, plus more-distant features of the crater. The right-eye, telephoto-lens camera of the rover's Mastcam took the component images Oct. 25, 2017.› Full image and caption
Credit: NASA/JPL-Caltech/MSSS 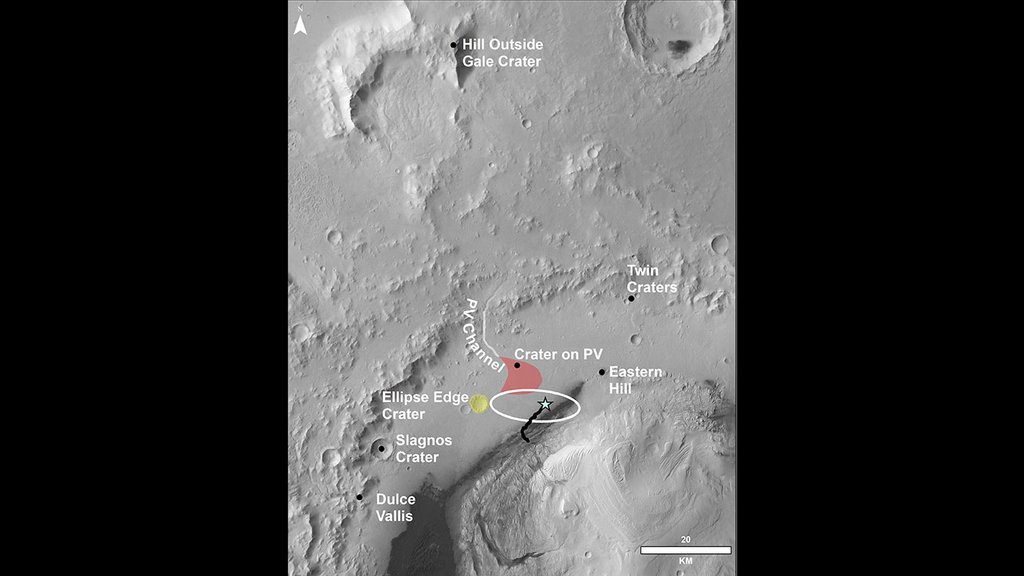 This image of the northwestern portion of Mars' Gale Crater and terrain north of it, from the European Space Agency's Mars Express orbiter, provides a locator map for some features visible in an October 2017 panorama from NASA's Curiosity Mars rover.› Full image and caption
Credit: ESA/DLR/FU Berlin/NASA/JPL-Caltech

A panorama taken by NASA's Curiosity Mars rover from a mountainside ridge provides a vista of key sites visited since the rover's 2012 landing, and the towering surroundings.

A panoramic image that NASA's Curiosity Mars rover took from a mountainside ridge provides a sweeping vista of key sites visited since the rover's 2012 landing, and the towering surroundings.

The view from "Vera Rubin Ridge" on the north flank of Mount Sharp encompasses much of the 11-mile (18-kilometer) route the rover has driven from its 2012 landing site, all inside Gale Crater. One hill on the northern horizon is about 50 miles (about 85 kilometers) away, well outside of the crater, though most of the scene's horizon is the crater's northern rim, roughly one-third that distance away and 1.2 miles (2 kilometers) above the rover.

Curiosity Project Scientist Ashwin Vasavada gives a descriptive tour of the Mars rover's view in Gale Crater. The white-balanced scene looks back over the journey so far.

Curiosity's Mast Camera, or Mastcam, took the component images of the panorama three months ago while the rover paused on the northern edge of Vera Rubin Ridge. The mission has subsequently approached the southern edge of the ridge and examined several outcrop locations along the way.

Last week, the Curiosity team on Earth received copious new images from the rover through a record-setting relay by NASA's MAVEN orbiter -- surpassing a gigabit of data during a single relay session from Mars for the first time in history.

The team is preparing to resume use of Curiosity's drill for acquiring powdered rock samples to be analyzed by laboratory instruments inside the rover, more than a year after the most recent of the 15 times the drill has pulled sample material from Martian rocks.

Inside an Impact Crater

Mount Sharp stands in the middle of Gale Crater, which is 96 miles (154 kilometers) in diameter.

"Even though Curiosity has been steadily climbing for five years, this is the first time we could look back and see the whole mission laid out below us," said Curiosity Project Scientist Ashwin Vasavada of NASA's Jet Propulsion Laboratory, Pasadena, California. "From our perch on Vera Rubin Ridge, the vast plains of the crater floor stretch out to the spectacular mountain range that forms the northern rim of Gale Crater." The rover photographed the scene shortly before northern Mars' winter solstice, a season of clear skies, gaining a sharp view of distant details.

Curiosity's exact landing spot on the floor of the crater lies out of sight behind a slight rise, but the scene includes "Yellowknife Bay." That's where, in 2013, the mission found evidence of an ancient freshwater-lake environment that offered all of the basic chemical ingredients for microbial life. Farther north are the channel and fan of Peace Vallis, relics of the streams that carried water and sediment into the crater about three billion years ago.

The site from which these images were taken sits 1,073 feet (327 meters) in elevation above Curiosity's landing site. Since leaving that site, the rover has climbed another 85 feet (26 meters) in elevation. In recent days, the Mastcam has recorded component images for a panorama looking uphill southward toward the mission's next major destination area. That is called the "Clay Unit" because observations from orbit detected clay minerals there.

The opportunity for some high-volume relay sessions with the MAVEN orbiter is helping the Curiosity team gain a bounty of images and other data this month.

Most data from Curiosity, through the years, have been relayed to Earth by NASA's Mars Reconnaissance Orbiter (MRO) and Mars Odyssey orbiter, which fly in nearly circular, nearly polar orbits predictably passing over Curiosity at about the same times every day. MAVEN, for Mars Atmosphere and Volatile Evolution, flies an elliptical orbit varying more than 40-fold from its nearest to farthest point from Mars. This suits MAVEN's science focus on Mars' atmosphere but results in variable coverage for relaying rover data. Usually, MAVEN passes over rover locations when the distance is too large for optimal relays. However, during occasional periods when the low point of its orbit is near Curiosity's location on Mars, the relays can serve exceedingly well.

"MAVEN definitely has the potential to move lots of data for us, and we expect to make even more use of it in the future," said JPL's Roy Gladden, manager of NASA's Mars Relay Network Office. The Jan. 22 relay of 1,006 megabits topped the previous record of 840 megabits, also set by MAVEN, but might in turn be bested by other favorable MAVEN relay opportunities in coming days.

The rover team intends to put Curiosity's drill to work on Vera Rubin Ridge before proceding to the Clay Unit. Resuming use of the drill requires an enterprising workaround for a mechanical problem that appeared in late 2016 and suspended use of the drill. A motor within the drill that advances the bit relative to stabilizer points no longer operates reliably.The workaround being evaluated thoroughly on a test rover at JPL does not use the stabilizer points. It moves the whole drill forward, with bit extended, by motion of the robotic arm.