Animation of the atmospheric-river event. This animation shows an atmospheric river event over Dec. 18-20, 2010. High-altitude winds pull large amounts of water vapor (yellow and orange) from the tropical ocean near Hawaii and carry it straight to California.
Credit: Anthony Wimmers and Chris Velden, University of Wisconsin-CI 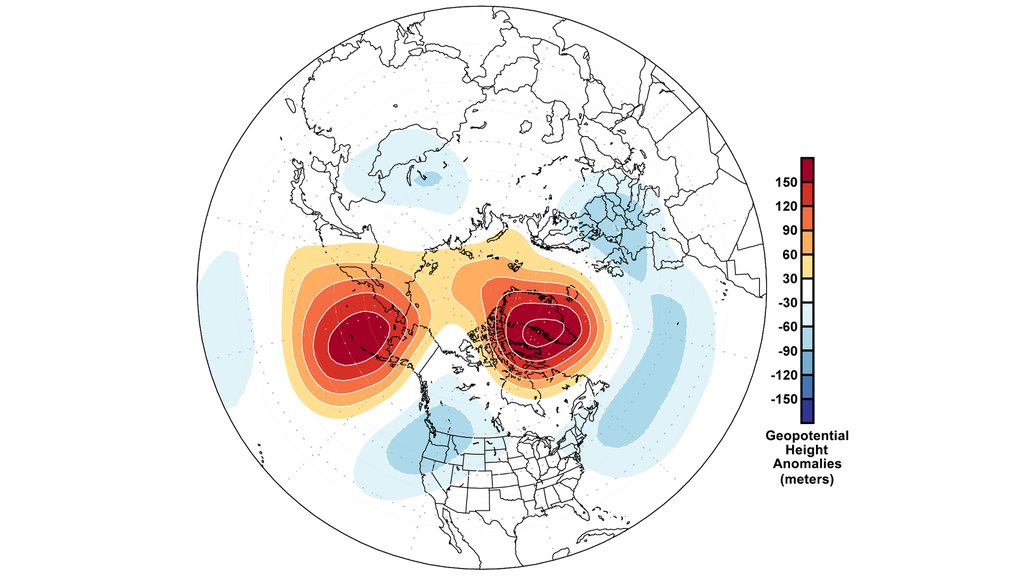 The high- and low-pressure anomaly areas on the map, shown in red/orange (high) and blue (low), are typical of the combined negative phases of the Arctic Oscillation and the Pacific/North American teleconnection. The low-pressure system northwest of California directs atmospheric rivers toward the Sierra Nevada, and the high-pressure systems at higher latitudes prevent the low from drifting northward away from California.
Credit: Bin Guan, NASA/JPL-Caltech and UCLA. 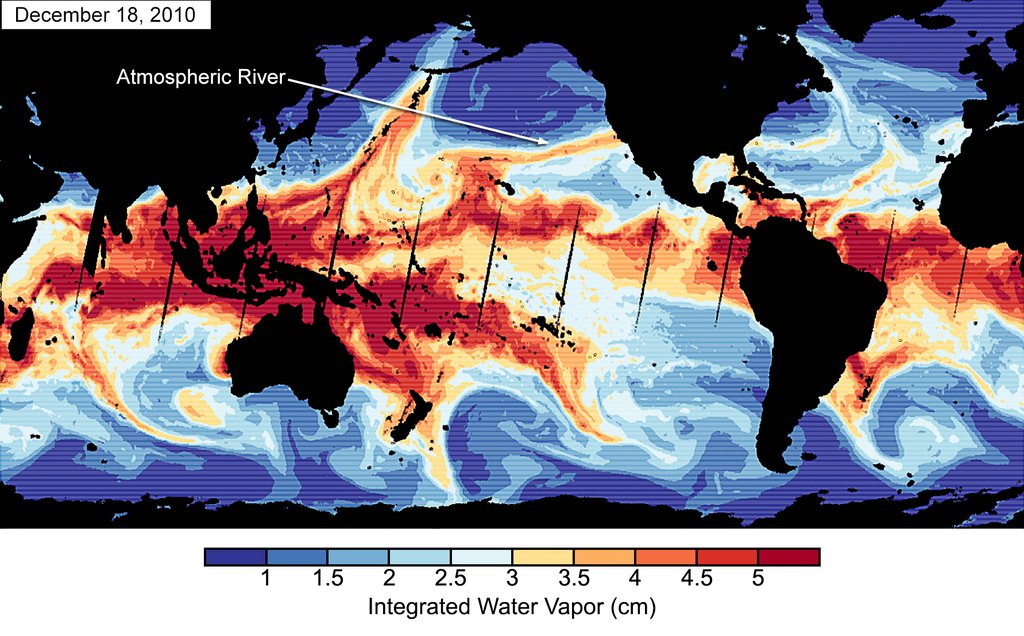 Satellite water-vapor measurements from Dec. 18, 2010, show an atmospheric river making landfall in California. Continents appear in black. The belt of very moist air (red) centered on the equator is the reservoir that supplies atmospheric rivers. On this date, the AO and PNA were both in their negative phases. Water vapor data from the Special Sensor Microwave Imager and the Special Sensor Microwave Imager/Sounder instruments on Defense Meteorological Satellite Program satellites.
Credit: Bin Guan, NASA/JPL-Caltech and UCLA.

Atmospheric rivers -- short-lived wind tunnels that carry water vapor from the tropical oceans to mid-latitude land areas -- are prolific producers of rain and snow on California's Sierra Nevada mountains. The finding, published in the journal Water Resources Research, has major implications for water management in the West, where Sierra runoff is used for drinking water, agriculture and hydropower.

The research team studied how two of the most common atmospheric circulation patterns in the Northern Hemisphere interact with atmospheric rivers. They found when those patterns line up in a certain way, they create a virtual freeway that leads the moisture-laden winds straight to the Sierras.

Bin Guan of the Joint Institute for Regional Earth System Science and Engineering, a collaboration between NASA's Jet Propulsion Laboratory in Pasadena, Calif., and UCLA, led a team of scientists from NASA, UCLA and the National Oceanic and Atmospheric Administration (NOAA) on this research.

An atmospheric river is a narrow stream of wind, about a mile (1.6 kilometers) high and sometimes of hurricane strength. Crossing the warm tropical Pacific in a few days, it becomes laden with water vapor. A moderate-sized atmospheric river carries as much water as the Mississippi River dumps into the Gulf of Mexico in an average week. When the river comes ashore and stalls over higher terrain, the water falls as snow or rain.

"Atmospheric rivers are the bridge between climate and West Coast snow," said Guan. "If scientists can predict these atmospheric patterns with reasonable lead times, we'll have a better understanding of water availability and flooding in the region." The benefit of improving flood prediction alone would be significant. A single California atmospheric-river storm in 1999 caused 15 deaths and $570 million in damage.

Guan's team used data from the JPL-developed Atmospheric Infrared Sounder (AIRS) instrument on NASA's Aqua satellite, along with NOAA satellite data and snowpack data from the California Department of Water Resources. They looked at the extremely snowy winter of 2010-2011, when 20 atmospheric rivers made landfall.

The team compared the dates of these events with the phases of the Arctic Oscillation (AO) and the Pacific/North American teleconnection (PNA). These large-scale weather patterns wax and wane, stretching thousands of miles across the atmosphere and shaping the climate of the mid-latitudes, somewhat as the better-known El Niño and La Niña patterns do in the tropical Pacific.

The phases of each pattern change irregularly and at varying intervals. The researchers charted these phases throughout the winter of 2010-2011. During 15 of the winter's 20 atmospheric river occurrences, both patterns were in the negative phase. The team then looked at the period 1998-2011 and found a similar correspondence: more atmospheric rivers occurred when both patterns were negative.

Guan points out that the double-negative phase correlation is rare.

"I looked at 50 years of atmospheric data. Only five months had those phases of the PNA and AO occurring together for more than 15 days of the month," he said.

AIRS was built and is managed by JPL for NASA's Science Mission Directorate in Washington. Aqua is managed by NASA's Goddard Space Flight Center, Greenbelt, Md. JPL is a division of the California Institute of Technology in Pasadena.