On Aug. 14, 2021, a small near-Earth asteroid (NEA) designated 2021 PJ1 passed our planet at a distance of over 1 million miles (about 1.7 million kilometers). Between 65 and 100 feet (20 and 30 meters) wide, the recently discovered asteroid wasn’t a threat to Earth. But this asteroid’s approach was historic, marking the 1,000th NEA to be observed by planetary radar in just over 50 years.

And only seven days later, planetary radar observed the 1,001st such object, but this one was much larger.

Since the first radar observation of the asteroid 1566 Icarus in 1968, this powerful technique has been used to observe passing NEAs and comets (collectively known as near-Earth objects, or NEOs). These radar detections improve our knowledge of NEO orbits, providing the data that can extend calculations of future motion by decades to centuries and help definitively predict if an asteroid is going to hit Earth, or if it’s just going to pass close by. For example, recent radar measurements of the potentially hazardous asteroid Apophis helped eliminate any possibility of it impacting Earth for the next 100 years. 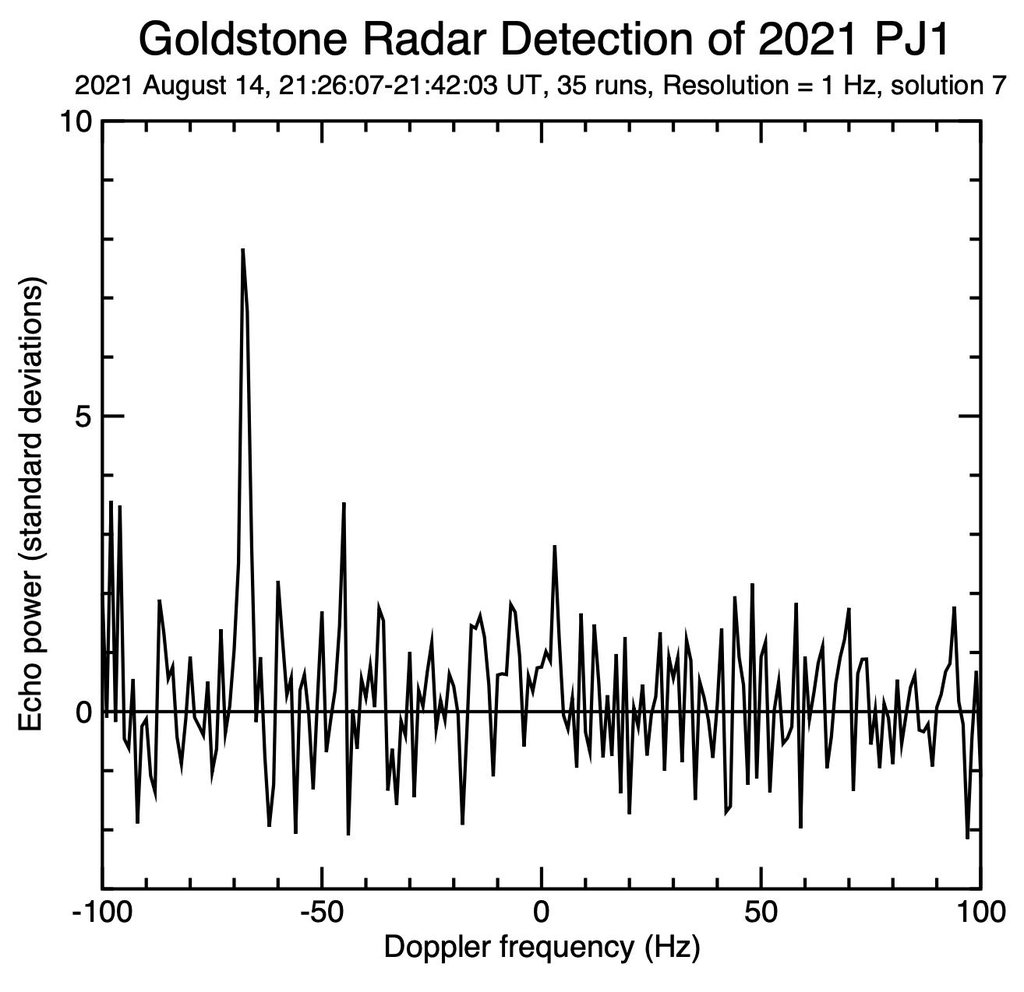 In addition, they can provide scientists with detailed information on physical properties that could be matched only by sending a spacecraft and observing these objects up close. Depending on an asteroid’s size and distance, radar can be used to image its surface in intricate detail while also determining its size, shape, spin rate, and whether or not it is accompanied by one or more small moons.

In the case of 2021 PJ1, the asteroid was too small and the observing time too short to acquire images. But as the 1,000th NEA detected by planetary radar, the milestone highlights the efforts to study the NEAs that have passed close to Earth.

“2021 PJ1 is a small asteroid, so when it passed us at a distance of over a million miles, we couldn’t obtain detailed radar imagery,” said Lance Benner, who leads NASA’s asteroid radar research program at NASA’s Jet Propulsion Laboratory in Southern California. “Yet even at that distance, planetary radar is powerful enough to detect it and measure its velocity to a very high precision, which improved our knowledge of its future motion substantially.”

Benner and his team led this effort using the 70-meter (230-foot) Deep Space Station 14 (DSS-14) antenna at the Deep Space Network’s Goldstone Deep Space Complex near Barstow, California, to transmit radio waves to the asteroid and receive the radar reflections, or “echoes.”

Of all the asteroids observed by planetary radar, well over half were observed by the large 305-meter (1,000-foot) telescope at Arecibo Observatory in Puerto Rico before it was damaged and decommissioned in 2020. The antenna collapsed soon after. Goldstone’s DSS-14 and 34-meter (112-foot) DSS-13 antennas have observed 374 near-Earth asteroids to date. Fourteen NEAs have also been observed in Australia using antennas at the Deep Space Network’s Canberra Deep Space Communication Complex to transmit radio waves to the asteroids and the CSIRO’s Australian Telescope Compact Array and Parkes Observatory in New South Wales to receive the radar reflections.

Explore NASA’s massive 70-meter (230-foot) DSS-14 antenna at the Goldstone Deep Space Communications Complex in Barstow, California, in this 360-degree video. Along with communicating with spacecraft throughout the solar system, DSS-14 and other DSN antennas can also be used to conduct radio science.

Nearly three-quarters of all NEA radar observations have been made since NASA’s NEO Observations Program, now a part of its Planetary Defense Program, increased funding for this work 10 years ago.

The most recent asteroid to be observed by radar made its approach by Earth only a week after 2021 PJ1. Between Aug. 20 and 24, Goldstone imaged 2016 AJ193 as it passed our planet at a distance of 2.1 million miles (about 3.4 million kilometers). Although this asteroid was farther away than 2021 PJ1, its radar echoes were stronger because 2016 AJ193 is about 40 times larger, with a diameter of about three-quarters of a mile (1.3 kilometers). The radar images revealed considerable detail on the object’s surface, including ridges, small hills, flat areas, concavities, and possible boulders.

“The 2016 AJ193 approach provided an important opportunity to study the object’s properties and improve our understanding of its future motion around the Sun,” said Shantanu Naidu, a scientist at JPL who led the Aug. 22 observations of 2016 AJ193. “It has a cometary orbit, which suggests that it may be an inactive comet. But we knew little about it before this pass, other than its size and how much sunlight its surface reflects, so we planned this observing campaign years ago.”

NASA’s NEOWISE mission had previously measured 2016 AJ193’s size, but the Goldstone observations revealed more detail: It turns out to be a highly complex and interesting object that rotates with a period of 3.5 hours. 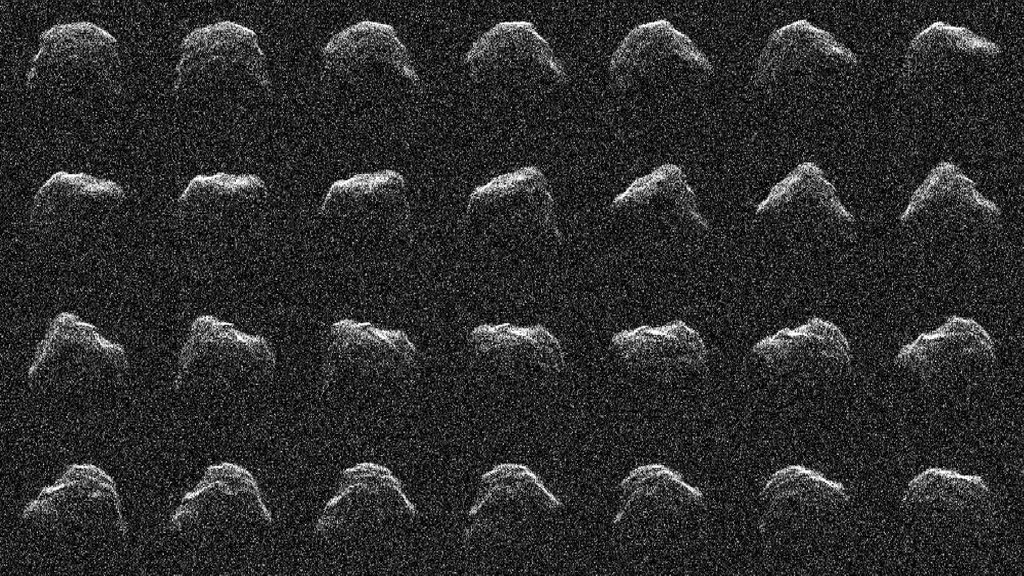 This series of images captured on Aug. 22, 2021, shows asteroid 2016 AJ193 rotate as it was observed by Goldstone's 70-meter antenna. The 1.3-kilometers wide object was the 1,001st near-Earth asteroid to be measured by planetary radar since 1968.
Credit: NASA/JPL-Caltech
Full Image Details

Scientists will use these new observations of 2016 AJ193 – the 1,001st NEA observed by planetary radar – to better understand its size, shape, and composition. As with 2021 PJ1, measurements of its distance and speed during this approach also provided data that will reduce uncertainties in computing its orbit.

“In addition to the surveys that use ground- and space-based optical telescopes to detect and track nearly 27,000 NEOs throughout our solar system, planetary radar is an important tool for monitoring asteroids that come close to Earth,” said Kelly Fast, NEO Observations Program Manager of the Planetary Defense Coordination Office at NASA Headquarters in Washington. “Reaching this milestone of now just over 1,000 radar detections of NEAs emphasizes the important contribution that has been made in characterizing this hazardous population, which is fundamental for our planetary defense efforts.”