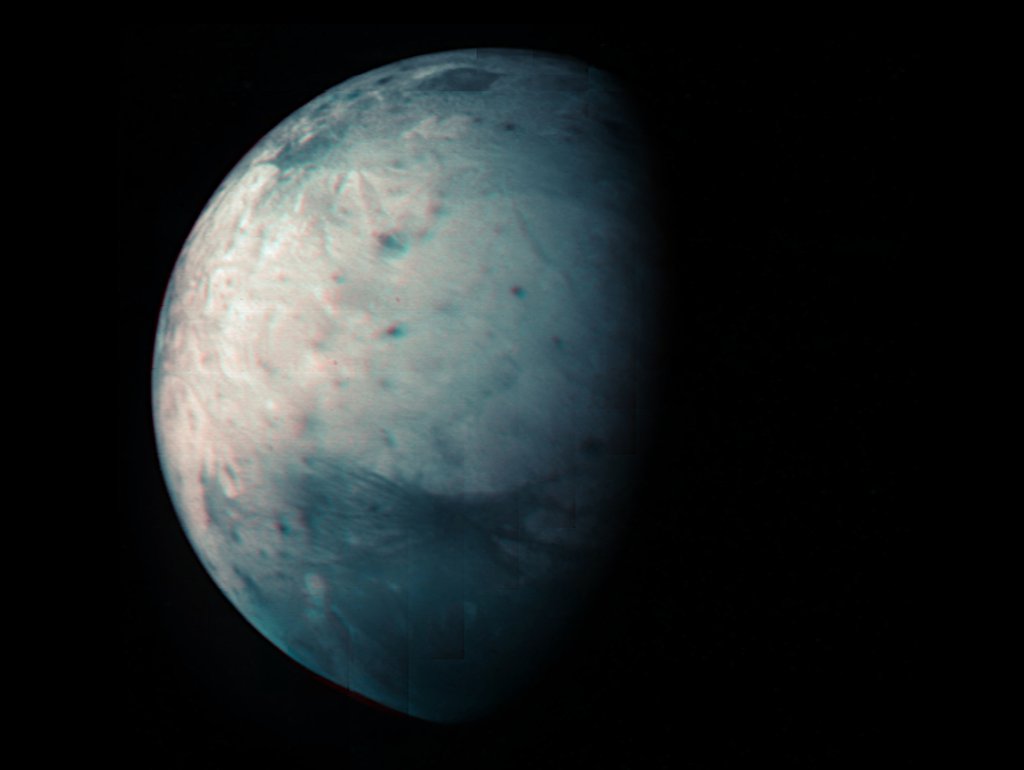 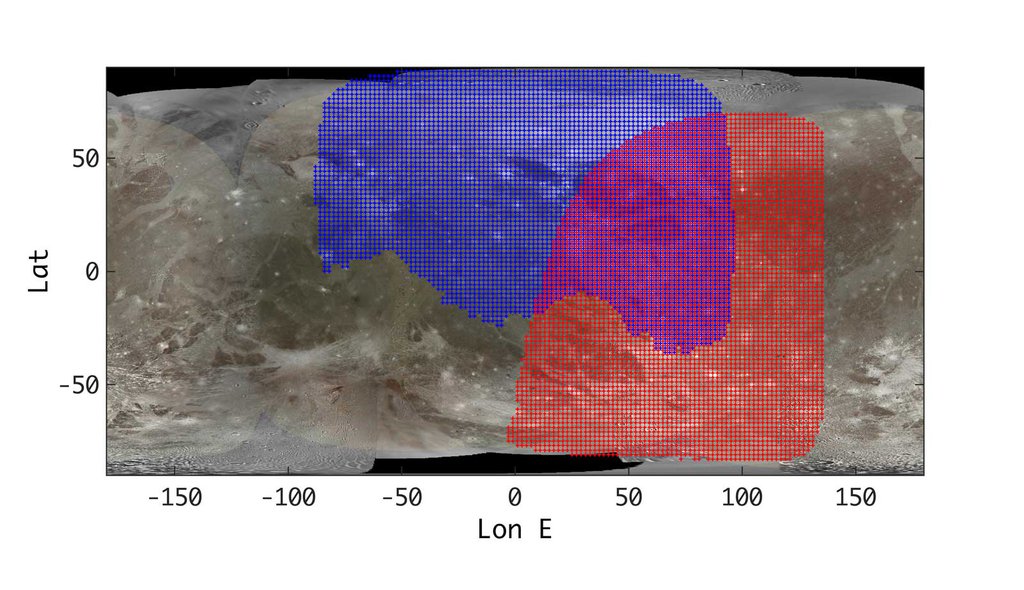 This annotated map of Ganymede depicts the areas of the Jovian moon’s surface that were imaged by the Juno spacecraft’s JIRAM instrument during two recent close approaches of the moon.

The spacecraft used its infrared instrument during recent flybys of Jupiter’s mammoth moon to create this latest map, which comes out a decade after Juno’s launch.

The science team for NASA’s Juno spacecraft has produced a new infrared map of the mammoth Jovian moon Ganymede, combining data from three flybys, including its latest approach on July 20. These observations by the spacecraft’s Jovian Infrared Auroral Mapper (JIRAM) instrument, which “sees” in infrared light not visible to the human eye, provide new information on Ganymede’s icy shell and the composition of the ocean of liquid water beneath.

JIRAM was designed to capture the infrared light emerging from deep inside Jupiter, probing the weather layer down to 30 to 45 miles (50 to 70 kilometers) below Jupiter’s cloud tops. But the instrument can also be used to study the moons Io, Europa, Ganymede, and Callisto (known collectively as the Galilean moons in honor of their discoverer, Galileo).

“Ganymede is larger than the planet Mercury, but just about everything we explore on this mission to Jupiter is on a monumental scale,” said Juno Principal Investigator Scott Bolton of the Southwest Research Institute in San Antonio. “The infrared and other data collected by Juno during the flyby contain fundamental clues for understanding the evolution of Jupiter’s 79 moons from the time of their formation to today.”

Juno came within 31,136 miles (50,109 kilometers) of Ganymede, the solar system’s largest moon, on July 20, 2021. During earlier flybys on June 7, 2021, and Dec. 26, 2019, the solar-powered orbiter came within 650 miles (1,046 kilometers) and 62,000 miles (100,000 kilometers), respectively. The three observational geometries provided an opportunity for JIRAM to see the moon’s north polar region for the first time, as well as compare the diversity in composition between the low and high latitudes.

Ganymede is also the only moon in the solar system with its own magnetic field. On Earth, the magnetic field provides a pathway for plasma (charged particles) from the Sun to enter our atmosphere and create auroras. Because Ganymede has no atmosphere to impede their progress, the surface at its poles is constantly being bombarded by plasma from Jupiter’s gigantic magnetosphere. The bombardment has a dramatic effect on Ganymede’s ice.

“We found Ganymede’s high latitudes dominated by water ice, with fine grain size, which is the result of the intense bombardment of charged particles,” said Alessandro Mura, a Juno co-investigator from the National Institute for Astrophysics in Rome. “Conversely, low latitudes are shielded by the moon’s magnetic field and contain more of its original chemical composition, most notably of non-water-ice constituents such as salts and organics. It is extremely important to characterize the unique properties of these icy regions to better understand the space-weathering processes that the surface undergoes.”

Juno’s unique polar views and closeups of Ganymede build on observations by NASA’s previous explorers, among them Voyager, Galileo, New Horizons, and Cassini. Future missions with Ganymede in their travel plans include the ESA (European Space Agency) JUICE mission, which will explore the icy Galilean moons with an emphasis on Ganymede, and NASA’s Europa Clipper, which will focus on Ganymede’s neighboring ocean world Europa.

“Since launch, Juno has executed over 2 million commands, orbited Jupiter 35 times, and collected about three terabits of science data,” said Project Manager Ed Hirst of JPL. “We are thrilled by our ongoing exploration of Jupiter, and there is much more to come. We have started our extended mission and look forward to 42 additional orbits to explore the Jovian system.”

Juno’s extended mission, which tasks the spacecraft with continuing its investigations through September 2025, includes close passes of Jupiter’s north polar cyclones, flybys of the moons Europa and Io (along with Ganymede), as well as the first exploration of the faint rings encircling the planet. It will also expand on discoveries Juno has already made about Jupiter’s interior structure, internal magnetic field, atmosphere (including polar cyclones, deep atmosphere, and aurora), and magnetosphere.