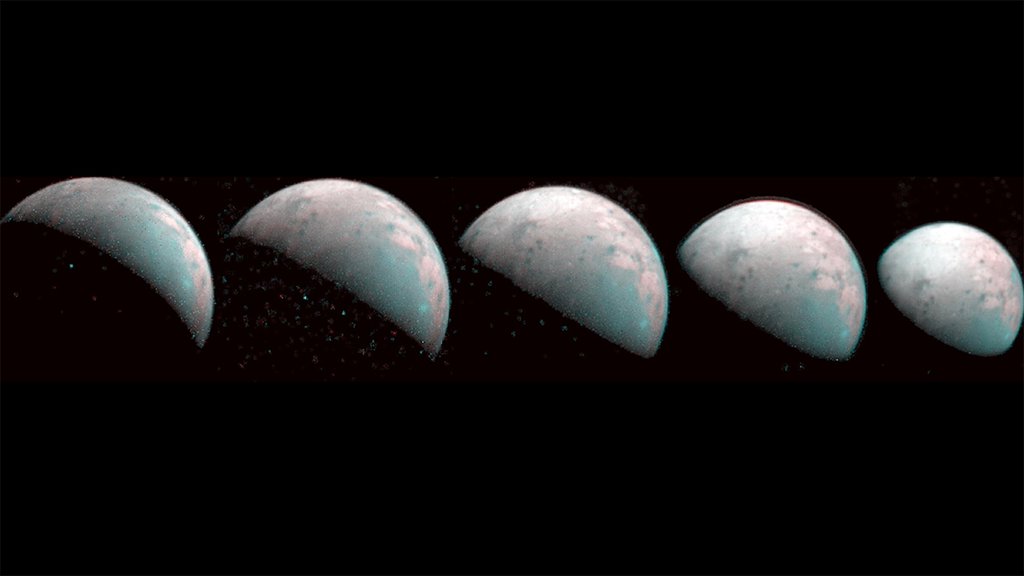 These images the JIRAM instrument aboard NASA's Juno spacecraft took on Dec. 26, 2019, provide the first infrared mapping of Ganymede's northern frontier. Frozen water molecules detected at both poles have no appreciable order to their arrangement and a different infrared signature than ice at the equator.
Credit: NASA/JPL-Caltech/SwRI/ASI/INAF/JIRAM 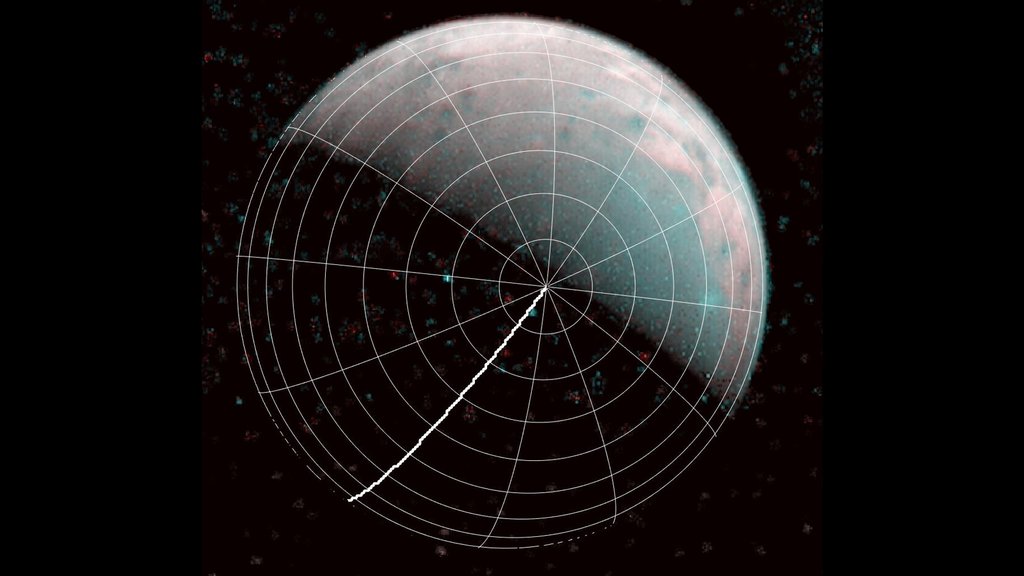 The north pole of Ganymede can be seen in center of this annotated image taken by the JIRAM infrared imager aboard NASA's Juno spacecraft on Dec. 26, 2019. The thick line is 0-degrees longitude.
Credit: NASA/JPL-Caltech/SwRI/ASI/INAF/JIRAM

Editor's note: Text in the first sentence regarding Ganymede's size relative to Mercury has been corrected.

On its way inbound for a Dec. 26, 2019, flyby of Jupiter, NASA's Juno spacecraft flew in the proximity of the north pole of the ninth-largest object in the solar system, the moon Ganymede. The infrared imagery collected by the spacecraft's Jovian Infrared Auroral Mapper (JIRAM) instrument provides the first infrared mapping of the massive moon's northern frontier.

Larger than the planet Mercury, Ganymede consists primarily of water ice. Its composition contains fundamental clues for understanding the evolution of the 79 Jovian moons from the time of their formation to today.

Ganymede is also the only moon in the solar system with its own magnetic field. On Earth, the magnetic field provides a pathway for plasma (charged particles from the Sun) to enter our atmosphere and create aurora. As Ganymede has no atmosphere to impede their progress, the surface at its poles is constantly being bombarded by plasma from Jupiter's gigantic magnetosphere. The bombardment has a dramatic effect on Ganymede's ice.

"The JIRAM data show the ice at and surrounding Ganymede's north pole has been modified by the precipitation of plasma," said Alessandro Mura, a Juno co-investigator at the National Institute for Astrophysics in Rome. "It is a phenomenon that we have been able to learn about for the first time with Juno because we are able to see the north pole in its entirety."

The ice near both poles of the moon is amorphous. This is because charged particles follow the moon's magnetic field lines to the poles, where they impact, wreaking havoc on the ice there, preventing it from having an ordered (or crystalline) structure. In fact, frozen water molecules detected at both poles have no appreciable order to their arrangement, and the amorphous ice has a different infrared signature than the crystalline ice found at Ganymede's equator.

"These data are another example of the great science Juno is capable of when observing the moons of Jupiter," said Giuseppe Sindoni, program manager of the JIRAM instrument for the Italian Space Agency.

JIRAM was designed to capture the infrared light emerging from deep inside Jupiter, probing the weather layer down to 30 to 45 miles (50 to 70 kilometers) below Jupiter's cloud tops. But the instrument can also be used to study the moons Io, Europa, Ganymede, and Callisto (also known collectively as the Galilean moons for their discoverer, Galileo).

Knowing the top of Ganymede would be within view of Juno on Dec. 26 flyby of Jupiter, the mission team programmed the spacecraft to turn so instruments like JIRAM could see Ganymede's surface. At the time surrounding its closest approach of Ganymede - at about 62,000 miles (100,000 kilometers) - JIRAM collected 300 infrared images of the surface, with a spatial resolution of 14 miles (23 kilometers) per pixel.

The secrets of Jupiter's largest moon revealed by Juno and JIRAM will benefit the next mission to the icy world. The ESA (European Space Agency) JUpiter ICy moons Explorer mission is scheduled to begin a 3 1/2-year exploration of Jupiter's giant magnetosphere, turbulent atmosphere, and its icy moons Ganymede, Callisto, and Europa beginning in 2030. NASA is providing an Ultraviolet Spectrograph instrument, along with also subsystems and components for two additional instruments: the Particle Environment Package and the Radar for Icy Moon Exploration experiment.