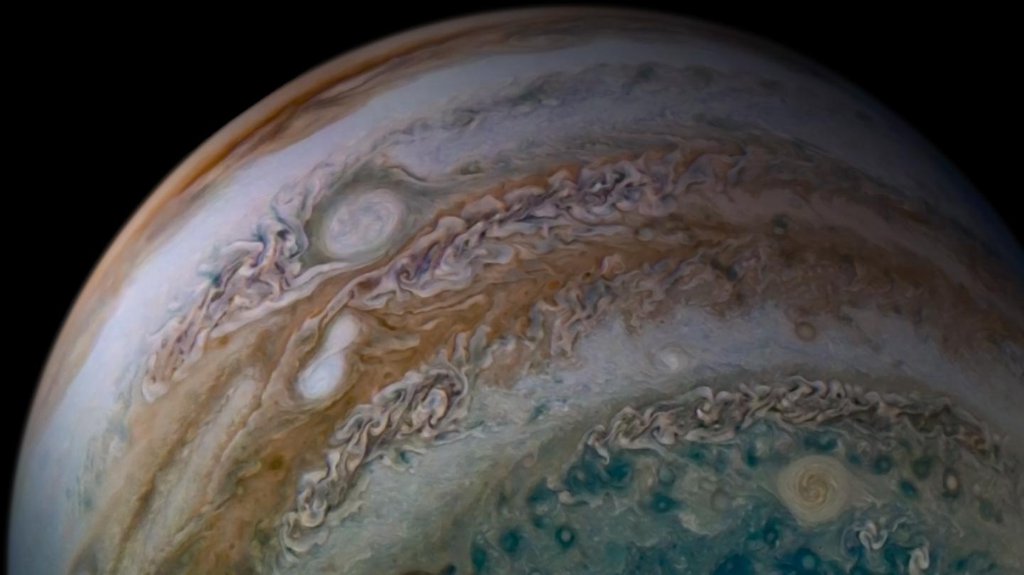 The spacecraft, which has been gathering data on the gas giant since July 2016, will become an explorer of the full Jovian system – Jupiter and its rings and moons.

NASA has authorized a mission extension for its Juno spacecraft exploring Jupiter. The agency’s most distant planetary orbiter will now continue its investigation of the solar system’s largest planet through September 2025, or until the spacecraft’s end of life. This expansion tasks Juno with becoming an explorer of the full Jovian system – Jupiter and its rings and moons – with multiple rendezvous planned for three of Jupiter’s most intriguing Galilean moons: Ganymede, Europa, and Io.

“Since its first orbit in 2016, Juno has delivered one revelation after another about the inner workings of this massive gas giant,” said principal investigator Scott Bolton of the Southwest Research Institute in San Antonio. “With the extended mission, we will answer fundamental questions that arose during Juno’s prime mission while reaching beyond the planet to explore Jupiter’s ring system and Galilean satellites.”

Proposed in 2003 and launched in 2011, Juno arrived at Jupiter on July 4, 2016. The prime mission will be completed in July 2021. The extended mission involves 42 additional orbits, including close passes of Jupiter’s north polar cyclones; flybys of Ganymede, Europa, and Io; as well as the first extensive exploration of the faint rings encircling the planet.

“By extending the science goals of this important orbiting observatory, the Juno team will start tackling a breadth of science historically required of flagships,” said Lori Glaze, planetary science division director at NASA Headquarters in Washington. “This represents an efficient and innovative advance for NASA’s solar system exploration strategy.”

The data Juno collects will contribute to the goals of the next generation of missions to the Jovian system – NASA’s Europa Clipper and the ESA (European Space Agency) JUpiter ICy moons Explorer (JUICE) mission. Juno’s investigation of Jupiter’s volcanic moon Io addresses many science goals identified by the National Academy of Sciences for a future Io explorer mission.

The extended mission’s science campaigns will expand on discoveries Juno has already made about Jupiter’s interior structure, internal magnetic field, atmosphere (including polar cyclones, deep atmosphere, and aurora), and magnetosphere.

“With this extension, Juno becomes its own follow-on mission,” said Steve Levin, Juno project scientist at NASA’s Jet Propulsion Laboratory in Southern California. “Close-up observations of the pole, radio occultations” – a remote sensing technique to measure properties of a planetary atmosphere or ring systems – “satellite flybys, and focused magnetic field studies combine to make a new mission, the next logical step in our exploration of the Jovian system.”

Jupiter’s enigmatic Great Blue Spot, an isolated patch of intense magnetic field near the planet’s equator, will be the target of a high-spatial-resolution magnetic survey during six flybys early in the extended mission. As Juno’s orbit evolves, multiple flybys of the moons Ganymede (2), Europa (3), and Io (11) are planned, as well as multiple passages through Jupiter’s tenuous rings.

Juno will also fly through the Europa and Io tori – ring-shaped clouds of ions – on multiple occasions, characterizing the radiation environment near these satellites to better prepare the Europa Clipper and JUICE missions for optimizing observation strategies and planning, science priorities, and mission design. The extended mission also adds a study of dust in Jupiter’s faint rings to Juno’s extensive list of science investigations.

The natural evolution of Juno’s orbit around the gas giant provides the wealth of new science opportunities that the extended mission capitalizes on. Every science pass sends the solar-powered spacecraft zooming low over Jupiter’s cloud tops, collecting data from a unique vantage point no other spacecraft has enjoyed.

The point during each orbit where Juno comes closest to the planet is called perijove (or PJ). Over the course of the mission, Juno’s perijoves have migrated northward, dramatically improving resolution over the northern hemisphere. The design of the extended mission takes advantage of the continued northward migration of these perijoves to sharpen its view of the multiple cyclones encircling the north pole while incorporating ring and Galilean moon flybys.

“The mission designers have done an amazing job crafting an extended mission that conserves the mission’s single most valuable onboard resource – fuel,” said Ed Hirst, the Juno project manager at JPL. “Gravity assists from multiple satellite flybys steer our spacecraft through the Jovian system while providing a wealth of science opportunities.” The satellite flybys also reduce Juno’s orbital period, which increases the total number of science orbits that can be obtained.”