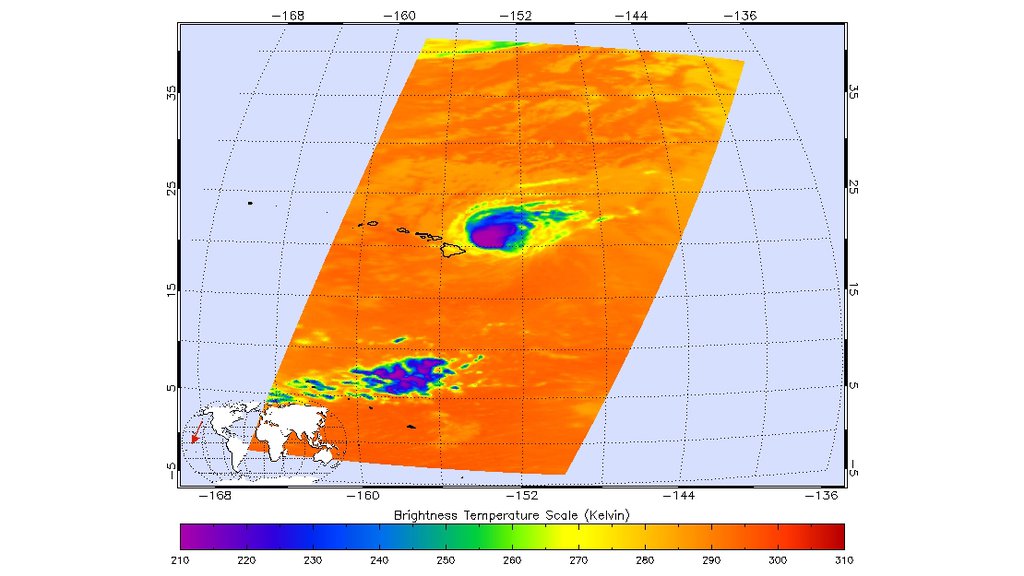 NASA's AIRS instrument captured this image of Hurricane Douglas at 1:53 a.m. local time on July 26, 2020, as the storm swept towards the Hawaiian Islands.› Full image and caption
Credit: NASA/JPL-Caltech

Wild weather sweeping in from the Pacific and the Gulf of Mexico is bringing flooding rains, high winds, and dangerous storm surges to Hawaii and Texas.

NASA's Atmospheric Infrared Sounder (AIRS) was monitoring two storm systems as they took aim at portions of Hawaii and Texas on July 26. Perched on NASA's Aqua satellite, AIRS is an instrument that studies Earth's weather and climate.

As of 11 a.m. local time, Hurricane Douglas was sweeping toward Hawaii with the potential to directly hit portions of the islands, from Maui to Kauai, in the late afternoon or evening. The purple areas in the AIRS image - taken at 1:53 a.m. local time on July 26 - indicate very cold clouds high in the atmosphere that are generally linked to heavy rainfall. Warmer clouds closer to Earth's surface show up as green and blue, and orange areas indicate cloud-free parts of the sky.

Tropical Storm Hanna made landfall as a Category 1 hurricane around 5 p.m. local time over Padre Island, Texas, on July 25. Since then, the storm has lost steam, weakening to a tropical storm in the early morning hours of July 26, and then to a tropical depression by the afternoon. The purple areas in the AIRS image - taken at 1:35 a.m. local time on July 26 - show regions within the tropical storm with cold clouds high in Earth's atmosphere that tend to produce heavy rainfall. The National Hurricane Center predicts that Hanna will continue over northeastern Mexico, where it will dissipate by late in the day on July 27.