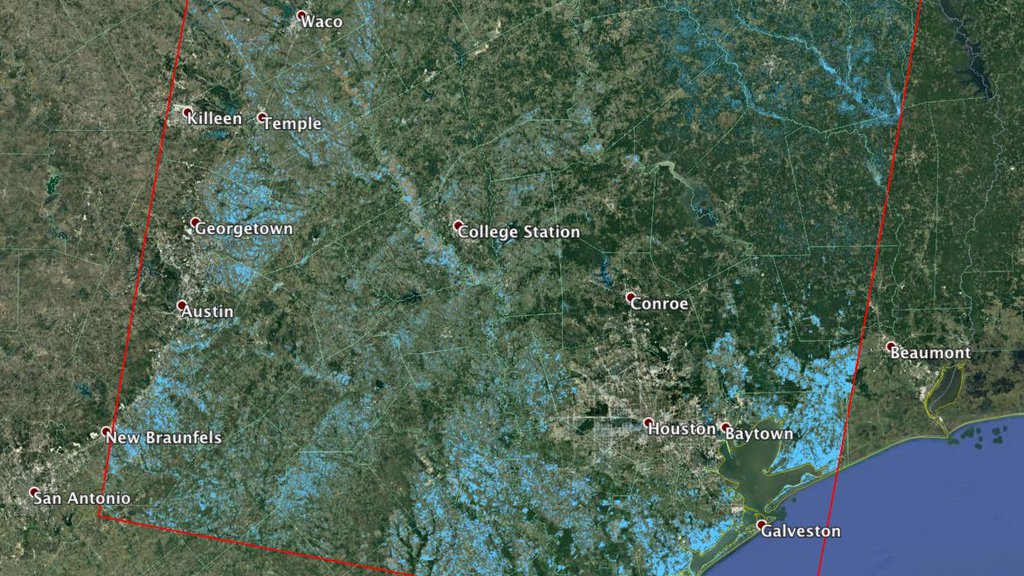 NASA is using its assets and expertise from across the agency, including from JPL, to help respond to Hurricane/Tropical Storm Harvey.

NASA is using its assets and expertise from across the agency, including from NASA's Jet Propulsion Laboratory in Pasadena, California, to help respond to Hurricane Harvey -- now Tropical Storm Harvey -- which has been a disaster of unprecedented proportions for those who live and work in Southeast Texas. With no atmospheric steering mechanism to move the storm once it made landfall, Harvey has been producing rainfall totals measured in feet, rather than inches, presenting exceptional challenges to local, state and federal emergency managers and first responders.

"This is an immense weather event that is creating a unique challenge," said Thomas Zurbuchen, associate administrator for NASA's Science Mission Directorate at the agency's headquarters in Washington. "NASA is working to enable and enhance the capabilities of our partners across federal agencies and elsewhere to ensure they are able to do the best job possible in assessing the threat and providing rescue and response services."

For more NASA resources on Harvey and other tropical systems, visit:

At the forefront of the agency's efforts, the NASA Earth Science Disasters Team is providing support to local, state and federal agencies in their response to the extreme flooding in the Houston area and related damage associated with Harvey. As a result of this team's activation, scientists at NASA centers and external partners are working closely with the state of Texas, the United States Geological Survey Hazards Data Distribution System, the Federal Emergency Management Agency (FEMA), the National Guard and other partners to leverage their science and application experience to provide analysis of satellite imagery, output products and other decision-support aids to inform disaster mapping and response efforts.

Coordination so far has included the generation and distribution of flood maps, using NASA analyses applied to data from several synthetic aperture radar (SAR) instruments on international partner satellites. The orbiting SAR instruments penetrate clouds and operate day and night, providing detailed, high-resolution, all-weather imagery of Earth's surface. NASA's partners tasked their spacecraft to make measurements of Southeastern Texas after the United States activated the humanitarian International Charter on Space and Major Disasters. Feedback from FEMA and other responders indicates these maps have been helpful in confirming coastal and river flood depths and identifying areas where inundation may be ongoing.

As another example, NASA's Global Precipitation Measurement (GPM) mission team has produced rainfall accumulation graphics and unique views of the structure of Harvey during various phases of development and landfall. GPM products help to identify the center of circulation and intense eyewall convection, and these images are provided to the National Oceanic and Atmospheric Administration's (NOAA's) National Hurricane Center via NASA's Short-term Prediction Research and Transition (SPoRT) Center and the Naval Research Laboratory. Based at NASA's Marshall Space Flight Center in Huntsville, Alabama, SPoRT is a project to transition unique observations and research capabilities to the operational weather community to improve short-term forecasts on a regional scale.

As skies clear over the area, the team will leverage NASA's constellation of Earth observing satellites -- including the Moderate-Resolution Imaging Spectroradiometer (MODIS) instrument aboard NASA's Terra and Aqua satellites, the Advanced Spaceborne Thermal Emission and Reflection Radiometer (ASTER) aboard Terra, Landsat, and the Visible Infrared Imaging Radiometer Suite (VIIRS) aboard the Suomi-National Polar-orbiting Partnership (Suomi-NPP) satellite -- to assist with flood mapping, and in the case of Suomi-NPP, mapping of utility and power outages through a reduction in emitted night lights. ASTER's U.S. Science Team is located at JPL.

Beyond the technical assistance and scientific expertise the agency is providing, NASA is working to ensure the continued safety of its employees and their families in the path of the storm, communicating closely with the recovery team at the agency's Johnson Space Center in Houston, which continues to assess conditions onsite in an effort to ensure a smooth transition back to normal operations once the center re-opens next week.