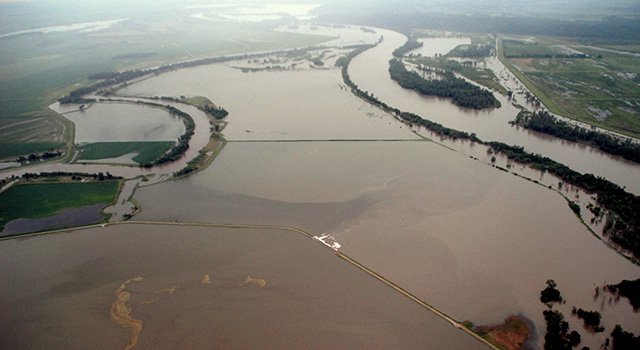 The flooded confluence of the Nishnabotna and Missouri Rivers in Iowa, June 2011. A study of the 2011 Missouri River Basin floods has shown that NASA satellite data can help predict the potential of a river basin to flood as much as 11 months in advance of flood season.
Credit: U.S. Army Corps of Engineers

NASA satellite data can help predict the potential for a river basin to flood months before flood season, and may result in longer lead times for flood warnings.

Every year, river flooding takes a heavy toll of lives and property damage in the United States. A new study has found that the potential of a river basin to flood can be assessed months in advance of flood season by using data from NASA's Gravity Recovery and Climate Experiment (GRACE) twin satellites. The new finding could eventually lead to longer lead times for flood warnings.

"Case studies of the catastrophic Missouri River floods of 2011 show that flood-potential early warning times could be increased by a couple of seasons using these satellite data," said co-author Jay Famiglietti. He is a senior water scientist at NASA's Jet Propulsion Laboratory, Pasadena, California, on leave from the University of California, Irvine, where he is an Earth system science professor.

"We're not talking about actual flood warnings -- those require a very accurate rainfall forecast -- but about warnings related to the saturation level of the ground and its predisposition to flood," Famiglietti noted.

Inland flooding claims an average of 33 lives and $4 billion in property damage every year in the United States, according to the National Weather Service. Besides cutting down on these losses, earlier flood predictions could help water managers improve their plans for evacuations and water diversion.

Lead author J.T. Reager, who did the work as a UCI postdoctoral researcher and recently joined JPL as a research scientist, and his colleagues compared river gauge measurements near the mouth of the Missouri River to basin-wide water storage measured by GRACE before the 2011 floods. With the satellite data, the researchers could recognize the potential for unusually high river discharge (such as occurs one month out of 20) 11 months in advance, and the potential for a huge flood (one month in 100) five months in advance. Model-produced estimates of snow water and soil moisture only gave useful indications of the basin's flood potential two months in advance.

The research is published online in the journal Nature Geoscience.

GRACE provides a geodetic means to observe monthly variations in the total water stored in large river basins by measuring tiny changes in Earth's gravitational field. When the amount of water stored in a region increases, the gravitational pull from that area also increases proportionately -- a change the satellites can detect.

The GRACE measurements capture not only water on Earth's surface, such as snowpack and river flows, but also moisture in soil and in aquifers. Water in the ground, called groundwater, tends to become saturated or dry out at an even rate, adding reliability to predictions of water availability.

Famiglietti noted that the same information would be equally useful in warning of future droughts. "If you're not paying attention to these very predictable trends, you're missing a great opportunity to prepare a region for flooding or drought," he said.

"We'd like to work with forecasters to make the GRACE observations work for them and their forecasting tools," Reager added.

For more information on GRACE, see these websites: