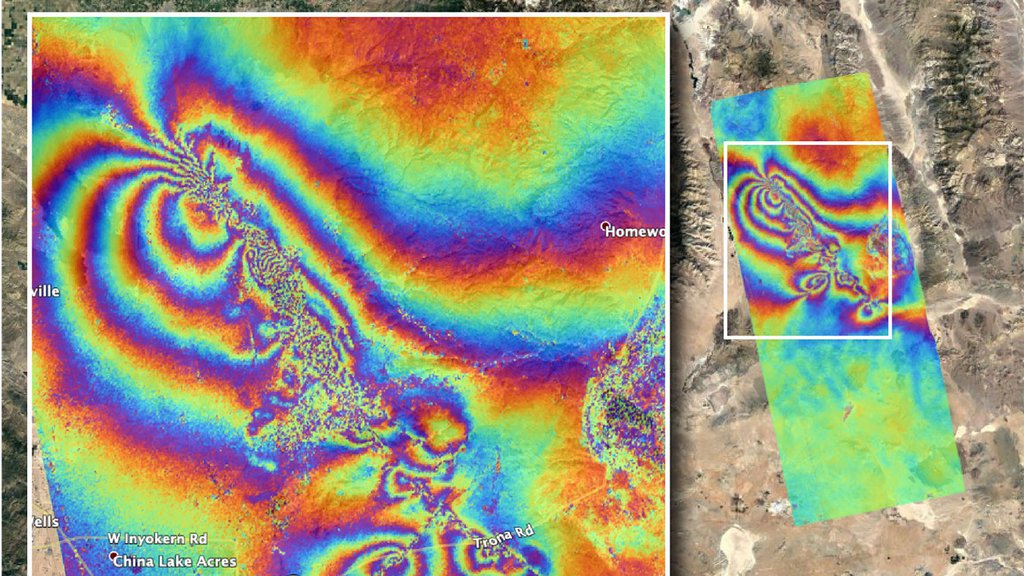 Damage from two strong earthquakes that rattled Southern California on July 4 and July 5 - a magnitude 6.4 and a magnitude 7.1, respectively - can be seen from space. The epicenter of the quakes was near the city of Ridgecrest, about 150 miles (241 kilometers) northeast of Los Angeles. According to the U.S. Geological Survey, the 7.1 quake was one of the largest to hit the region in some 40 years.

The Advanced Rapid Imaging and Analysis (ARIA) team at NASA's Jet Propulsion Laboratory in Pasadena, California, used synthetic aperture radar (SAR) data from the ALOS-2 satellite to produce a map showing surface displacement from the earthquakes. The post-quake imagery was acquired on July 8, 2019, and compared with April 8, 2018, data from the same region.

Each color cycle represents 4.8 inches (12 centimeters) of ground displacement either toward or away from the satellite. The linear features that cut the color fringes in the southeast indicate likely locations of surface rupture caused by the earthquakes, and the "noisy" areas in the northwest may indicate locations where the ground surface was disturbed by them.

The USGS reported over 1,000 aftershocks in the region following the July 5 earthquake. State and federal scientists, including those from the California Geological Survey and USGS, are using this surface deformation map in the field for assessing the damages and mapping the faults that broke during the two major earthquakes as well as the thousands of aftershocks.

In the aftermath of the earthquakes, NASA's Earth Science Disasters Program is in communication with the California Earthquake Clearinghouse, which is coordinating response efforts with the California Air National Guard, the USGS and the Federal Emergency Management Agency. NASA analysts are using data from satellites to produce visualizations of land deformation and potential landslides, among other earthquake impacts, and are making them available to response agencies. NASA's Disasters Program promotes the use of satellite observations in predicting, preparing for, responding to and recovering from disasters around the world.

The Japanese Aerospace Exploration Agency (JAXA) provided the ALOS-2 data for the production of the map. The ARIA team's analysis was funded by NASA's Disasters Program.