This set of images from NASA's Mars Reconnaissance Orbiter shows a fierce dust storm is kicking up on Mars, with rovers on the surface indicated as icons.› Full image and caption
Credit: NASA/JPL-Caltech/MSSS 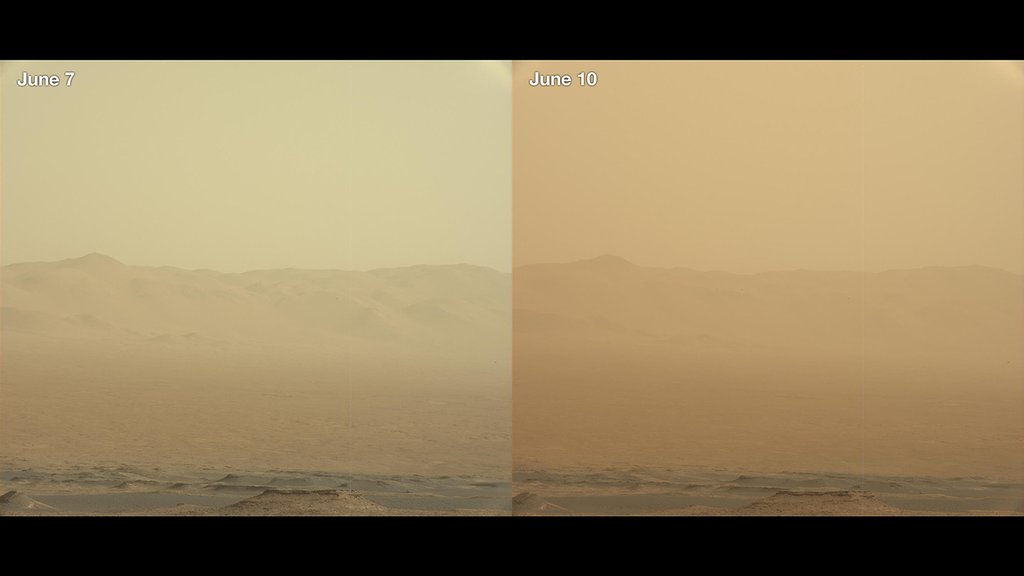 These two views from NASA's Curiosity rover, acquired specifically to measure the amount of dust inside Gale Crater, show that dust has increased over three days from a major Martian dust storm. The left-hand image shows a view of the east-northeast rim of Gale Crater on June 7, 2018 (Sol 2074); the right-hand image shows a view of the same feature on June 10, 2018 (Sol 2077). The images were taken by the rover's Mastcam.› Full image and caption
Credit: NASA/JPL-Caltech/MSSS 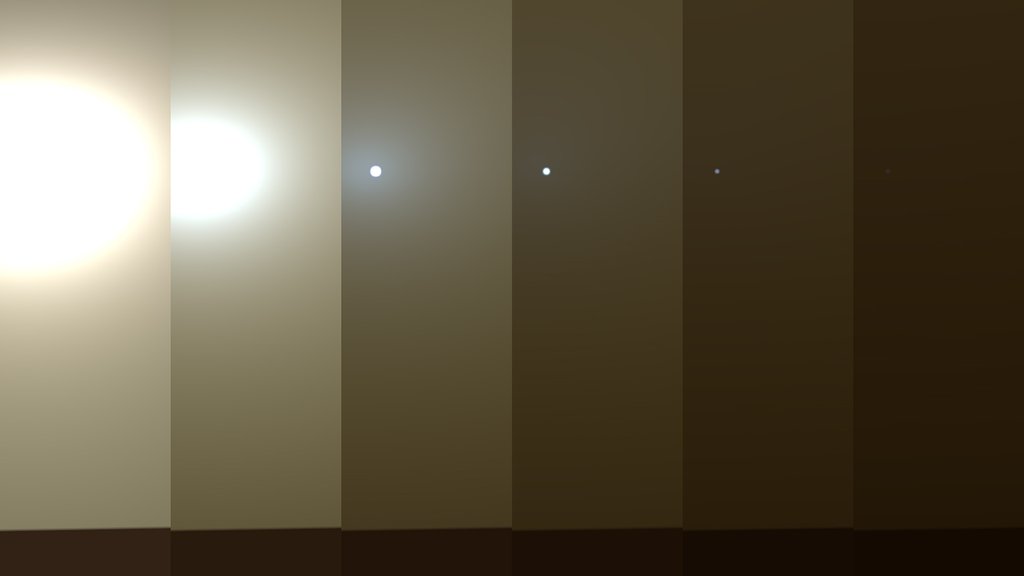 This series of images shows simulated views of a darkening Martian sky blotting out the Sun from NASA's Opportunity rover's point of view, with the right side simulating Opportunity's current view in the global dust storm (June 2018).› Full image and caption
Credit: NASA/JPL-Caltech/TAMU 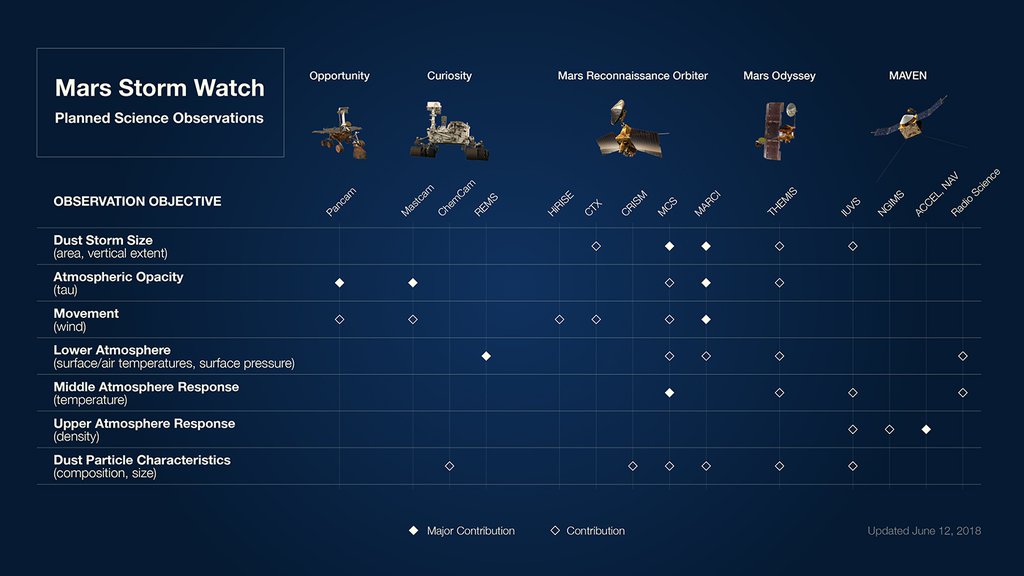 This graphic shows the ongoing contributions of NASA's rovers and orbiters during a Martian dust storm that began on May 30, 2018.
Credit: NASA/JPL-Caltech 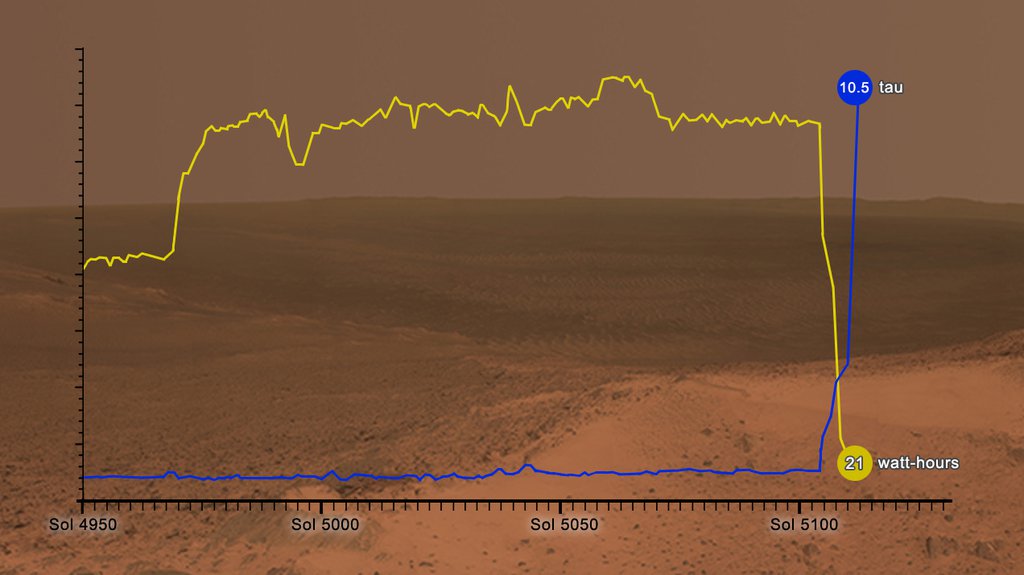 This graphic shows how the energy available to NASA's Opportunity rover on Mars (in watt-hours) depends on how clear or opaque the atmosphere is (measured in a value called tau). When the tau value (blue) is high, the rover's power levels (yellow) drop.
Credit: NASA/JPL-Caltech/New Mexico Museum of Natural History

One of the most intense Martian dust storms ever observed is being studied by a record number of NASA spacecraft.

One of the thickest dust storms ever observed on Mars has been spreading for the past week and a half. The storm has caused NASA's Opportunity rover to suspend science operations, but also offers a window for four other spacecraft to learn from the swirling dust.

NASA has three orbiters circling the Red Planet, each equipped with special cameras and other atmospheric instruments. Additionally, NASA's Curiosity rover has begun to see an increase in dust at its location in Gale Crater.

"This is the ideal storm for Mars science," said Jim Watzin, director of NASA's Mars Exploration Program at the agency's headquarters in Washington. "We have a historic number of spacecraft operating at the Red Planet. Each offers a unique look at how dust storms form and behave -- knowledge that will be essential for future robotic and human missions."

Dusty With a Chance of Dust

Dust storms are a frequent feature on Mars, occurring in all seasons. Occasionally, they can balloon into regional storms in a matter of days, and sometimes even expand until they envelop the planet. These massive, planet-scaled storms are estimated to happen about once every three to four Mars years (six to eight Earth years); the last one was in 2007. They can last weeks, or even months at the longest.

The current storm above Opportunity, which is still growing, now blankets 14 million square miles (35 million square kilometers) of Martian surface -- about a quarter of the planet.

All dust events, regardless of size, help shape the Martian surface. Studying their physics is critical to understanding the ancient and modern Martian climate, said Rich Zurek, chief scientist for the Mars Program Office at NASA's Jet Propulsion Laboratory in Pasadena, California.

"Each observation of these large storms brings us closer to being able to model these events -- and maybe, someday, being able to forecast them," Zurek said. "That would be like forecasting El Niño events on Earth, or the severity of upcoming hurricane seasons."

The thin atmosphere makes these storms vastly different from anything encountered on Earth: Despite the drama of "The Martian," the most powerful surface winds encountered on Mars would not topple a spacecraft, although they can sand-blast dust particles into the atmosphere.

Members of NASA's spacecraft "family" at Mars often help each other out. The agency's orbiters regularly relay data from NASA's rovers back to Earth. Orbiters and rovers also offer different perspectives on Martian terrain, allowing their science to complement one another.

The Mars Reconnaissance Orbiter has a special role, acting as an early warning system for weather events such as the recent storm. It was the orbiter's wide-angle camera, called the Mars Color Imager, that offered the Opportunity team a heads up about the storm. This imager, built and operated by Malin Space Science Systems in San Diego, can create daily global maps of the planet that track how storms evolve, not unlike weather satellites that track hurricanes here on Earth.

NASA's two other orbiters -- 2001 Mars Odyssey and MAVEN (Mars Atmosphere and Volatile Evolution) -- also provide unique science views. Odyssey has an infrared camera called THEMIS (Thermal Emission Imaging System) that can measure the amount of dust below it; MAVEN is designed to study the behavior of the upper atmosphere and the loss of gas to space.

Science happens on the ground as well, of course. Despite being on the other side of the planet from the evolving dust storm, NASA's Curiosity rover is beginning to detect increased "tau," the measure of the veil of dusty haze that blots out sunlight during a storm. As of Tuesday, June 12, the tau inside Gale Crater was varying between 1.0 and 2.0 -- figures that are average for dust season, though these levels usually show up later in the season.

Fortunately, Curiosity has a nuclear-powered battery. That means it doesn't face the same risk as the solar-powered Opportunity.

The Next Big One?

Since 2007, Mars scientists have been patiently waiting for a planet-encircling dust event -- less precisely called a "global" dust storm, though the storms never truly cover the entire globe of Mars. In 1971, one of these storms came close, leaving just the peaks of Mars' Tharsis volcanoes poking out above the dust.

The most recent dust storm is the earliest ever observed in the northern hemisphere of Mars, said Bruce Cantor of Malin Space Science Systems, deputy principal investigator for the Mars Color Imager. But it could take several more days before anyone can tell whether the storm is encircling the planet.

If it does "go global," the storm will offer a brand new look at Martian weather. Four spacecraft stand ready to collect the science that shakes out.

Lockheed Martin Space Systems, Denver, is the prime contractor for the Odyssey, MRO and MAVEN projects, having developed and built all three orbiters. Mission operations are conducted jointly from Lockheed Martin and from JPL for Odyssey and MRO, and jointly with the GSFC for MAVEN.

For more updates about the Martian dust storm visit: