An animation of satellite imagery from NOAA's GOES-West satellite from Feb. 1 to Feb. 4 captured the movement of a stream of clouds associated with an atmospheric river storm that is bringing rain to northern California.
Credit: NASA/NOAA GOES Project, Dennis Chesters 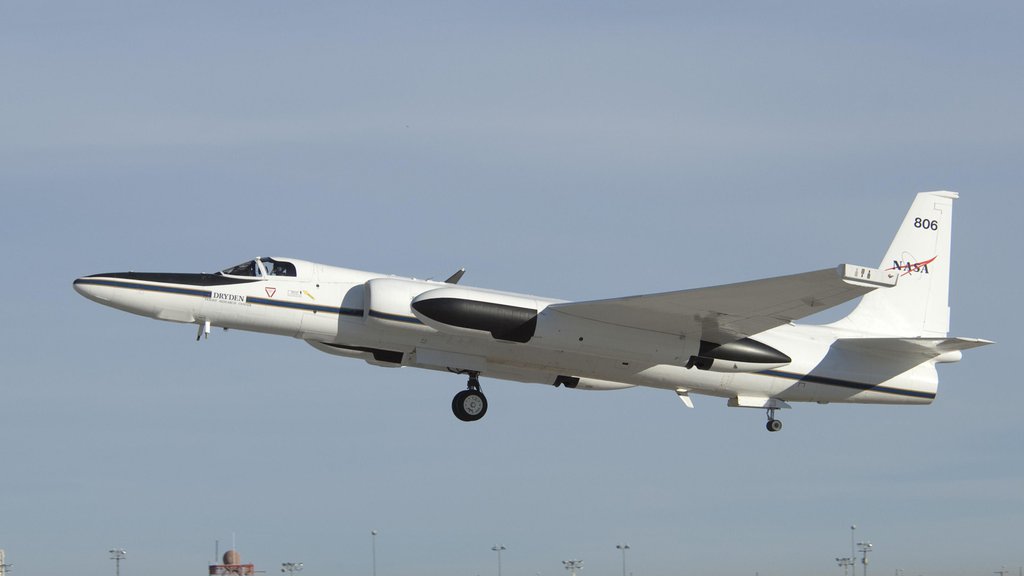 NASA is part of a major field campaign studying intense atmospheric river storms from the ocean, land, air and space.

NASA is part of CalWater 2015, a massive research effort to study atmospheric rivers this month.

Atmospheric rivers are flows of tropical moisture across the Pacific Ocean to the West Coast, where the moisture falls as rain or snow. One type of atmospheric river is called the Pineapple Express because it originates near Hawaii.

Storms driven by atmospheric rivers produce about 40 percent of California's annual water supply, but also most of its major floods.

NASA's ER-2 instrumented research aircraft is scheduled to fly later this week as part of a field campaign to study atmospheric rivers, short-lived weather events that carry a flood of moisture from the tropics to the U.S. West Coast. Current forecasts are predicting that northern California will receive several inches of rain from an atmospheric river storm on Thursday and Friday.

CalWater 2015, a multiagency, interdisciplinary field campaign, is designed to improve understanding of when and how California ends up on the receiving end of an atmospheric river, and also how much rain these events can bring -- a crucial concern in the state's ongoing historic drought.

"In California, we count on atmospheric rivers to deliver about 40 percent of our annual freshwater supply," said Duane Waliser, chief Earth scientist at NASA's Jet Propulsion Laboratory in Pasadena, California, and a member of the CalWater 2015 scientific steering team. "They also account for most of our major floods. It's crucial that we learn as much as we can about them to help support water managers' decisions and disaster preparedness."

CalWater 2015 will run till about Feb. 27. During this period, when weather forecasters see a major atmospheric river event developing in the Pacific Ocean -- typically about five days before rain reaches the West Coast -- the ER-2 and three other research aircraft will fly through and above the storm while the National Oceanic and Atmospheric Administration's research ship, the Ronald H. Brown, makes complementary measurements from the ocean surface and NASA's ISS-RapidScat mission collects related data from its perch on the International Space Station.

The ER-2 flies at about 65,000 feet (20 kilometers) -- above 94 percent of Earth's atmosphere. It will carry four scientific instruments designed and managed at NASA. "We're adding a unique remote sensing component to the campaign," said JPL's David Diner, principal investigator for AirMSPI, one of the onboard instruments. "It's exciting for us to coordinate with other aircraft that are flying at lower altitudes and with surface facilities, and to contribute the contextual view that we get from the high altitude."

The four instruments are:

-- AVIRIS Classic, the Airborne Visible/Infrared Imaging Spectrometer, an optical sensor that records upwelling light from Earth's surface and atmosphere. Also a JPL instrument, AVIRIS is used to identify and measure molecules and particles on Earth and in the air by the way they absorb and scatter light.

-- CPL, the Cloud Physics Lidar, which studies clouds and aerosols by lidar, a detection system that is like radar but uses laser light instead of radio waves. Designed and operated by NASA's Goddard Space Flight Center, Greenbelt, Maryland, CPL catalogs and tracks particles in the atmosphere. Its deployment in CalWater 2015 also provides a unique opportunity to validate measurements by NASA's Cloud-Aerosol Transport System (CATS) instrument early in its operational lifetime. CATS was launched to the International Space Station on Jan. 10.

-- HAMSR, JPL's High Altitude MMIC (Monolithic Microwave Integrated Circuit) Sounding Radiometer, a microwave radiometer that collects observations that can be used to determine the temperature, water vapor and liquid water in clouds throughout the atmosphere, as well as the presence of precipitation.

NASA's ISS-RapidScat mission, operated by JPL, is providing its observations of wind speed and direction over the Pacific to the researchers in near-real time. In return, the RapidScat science team will receive shipboard measurements of the same winds to help calibrate the RapidScat instrument and validate its observations. "It's a good collaboration because we happen to be looking at similar phenomena at the same time," said JPL's Ernesto Rodriguez, the RapidScat project scientist.

Besides the ER-2, the other research aircraft are a P-3 and a Gulfstream IV aircraft from NOAA and a Gulfstream I aircraft from the DOE. The ER-2 flies from its home base at the NASA Armstrong Flight Research Center facility in Palmdale, California; other research flights originate at McClellan Airfield in Sacramento. Ground-based instruments throughout the state are also collecting data.