Meet the People Behind the SWOT Water-Tracking Satellite 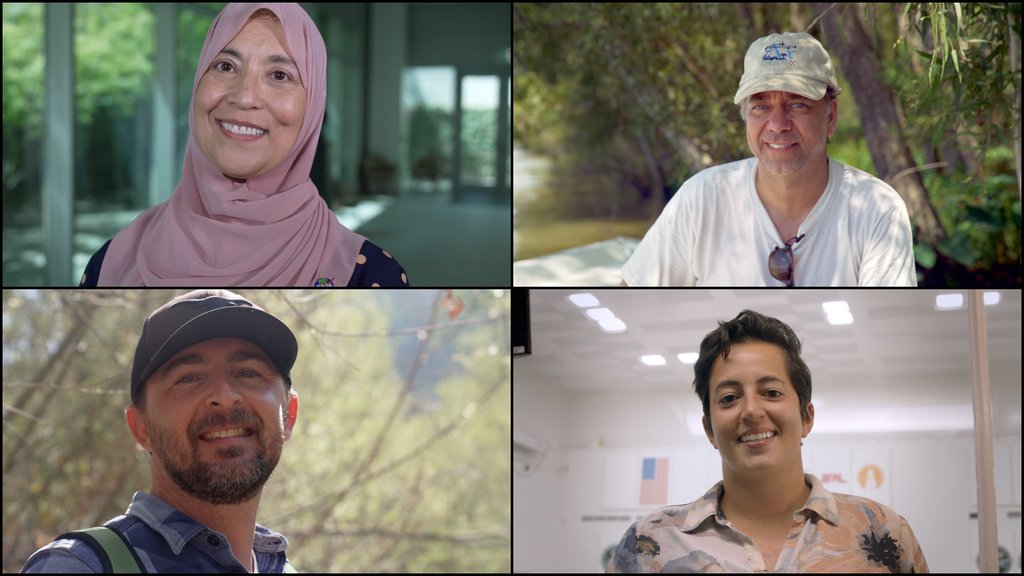 Clockwise from top left, Tahani Amer, Marc Simard, Christine Gebara, and Cedric David are the subjects of a new video series about the NASA engineers and scientists who work on the Surface Water and Ocean Topography (SWOT) satellite, which will track most of Earth’s water.

A new video series highlights the hard work and passion of scientists and engineers who are helping to get this remarkable new satellite off the ground.

As the international Surface Water and Ocean Topography (SWOT) mission finishes final preparations for its December launch, a new video series focuses on some of the engineers and scientists behind the satellite, which will be the first to observe nearly all water on Earth’s surface.

Led by NASA and the French space agency Centre National d’Études Spatiales (CNES), SWOT will measure the height of water in lakes, rivers, reservoirs, and the ocean. The SUV-size satellite will improve scientists’ ability to track the movement of water around the world while providing data that will help communities monitor and plan for changing water resources.

In addition, the mission will boost scientists’ understanding of how sea level rise will affect coastlines around the world and the people who live near them. SWOT will also see ocean features too small for current space-based instruments to detect, improving researchers’ understanding of their role in climate change.

Meet some of the scientists and engineers contributing to a new Earth science mission, led by NASA and the French space agency Centre National d’Études Spatiales (CNES). The Surface Water and Ocean Topography (SWOT) satellite will make the first global survey of nearly all water on Earth’s surface.

More than a machine, SWOT is the culmination of years of work by a global team of engineers, scientists, and technicians committed to improving our understanding of our home planet. In this video series, you can meet team members from NASA’s Jet Propulsion Laboratory in Southern California, which manages the U.S. portion of the mission, and from the agency’s headquarters in Washington as they explain why working on SWOT means so much to them:

The full video series can be viewed here.

Watch a Q&A session with Tahani Amer on JPL’s Instagram account on Dec. 1. There will also be live chats on Instagram with Cedric David on Dec. 7, Marc Simard on Jan. 11, and Christine Gebara on Jan. 25. All three live chats will take place at noon PST, and questions can be submitted during the chats in the comments section or with the hashtag #AskNASA.

SWOT is scheduled to launch from Vandenberg Space Force Base in central California Dec. 12. NASA’s Launch Services Program, based at the agency’s Kennedy Space Center in Florida, is managing the launch service.

Updates about the satellite’s progress toward launch can be found at:

To learn more about SWOT, visit: