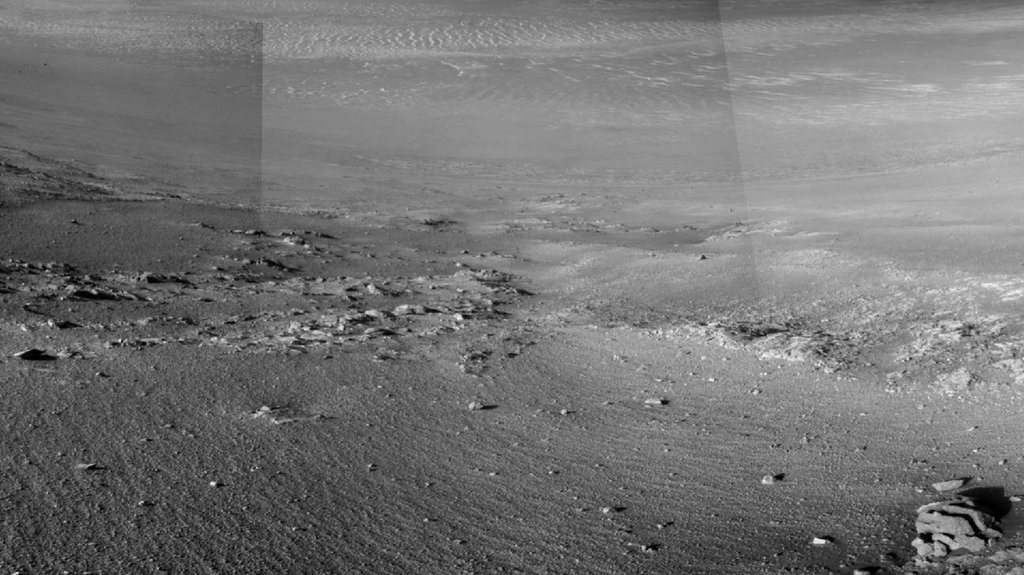 Textured rows on the ground in this portion of "Perseverance Valley" are under investigation by NASA's Mars Exploration Rover Opportunity, which used its Navigation Camera to take the component images of this downhill-looking scene. The rover reaches its 5,000th Martian day, or sol, on Feb. 16, 2018.› Full image and caption
Credit: NASA/JPL-Caltech 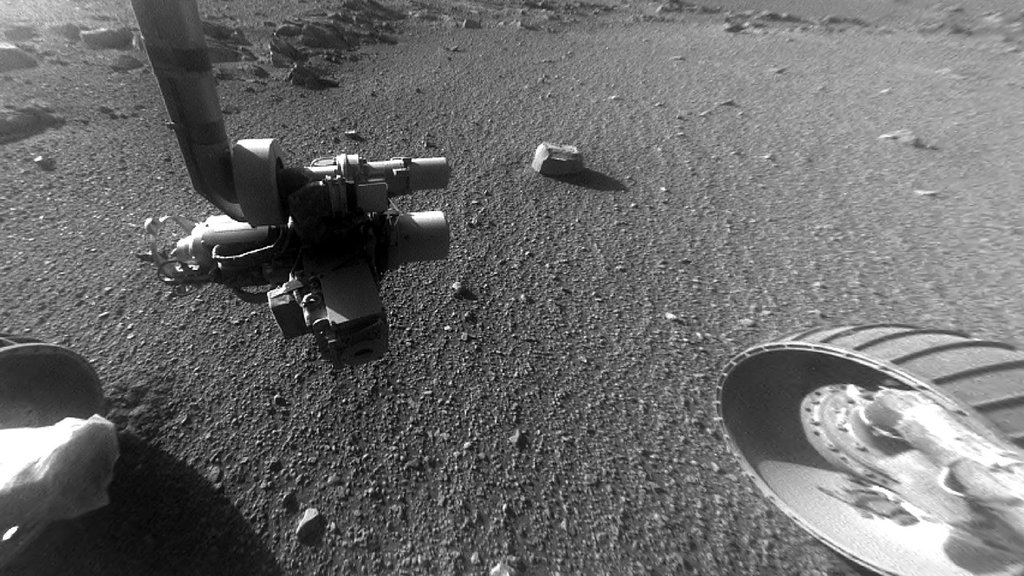 This late-afternoon view from the front Hazard Avoidance Camera on NASA's Mars Exploration Rover Opportunity shows a pattern of rock stripes on the ground, a surprise to scientists on the rover team. It was taken in January 2018, as the rover neared Sol 5000 of what was planned as a 90-sol mission.› Full image and caption
Credit: NASA/JPL-Caltech 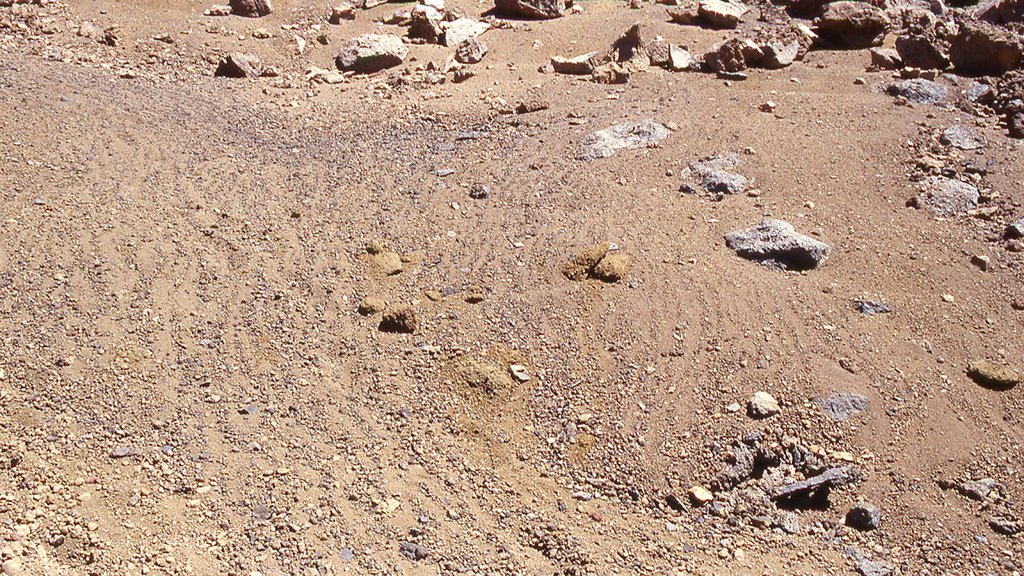 This image shows stone stripes on the side of a volcanic cone on Mauna Kea, Hawaii. The stripes are made of small rock fragments and they are aligned downhill as freeze-thaw cycles have lifted them up and out of the finer-grained regolith, and moved them to the sides, forming stone stripes.› Full image and caption
Credit: Washington University in St. Louis/NASA

The ground texture seen in recent images from the rover resembles a smudged version of very distinctive stone stripes on some mountain slopes on Earth that result from repeated cycles of freezing and thawing of wet soil. But it might also be due to wind, downhill transport, other processes or a combination.

Opportunity landed on Mars in January 2004. As it reaches the 5,000th Martian day, or sol, of what was planned as a 90-sol mission, it is investigating a channel called "Perseverance Valley," which descends the inboard slope of the western rim of Endeavour Crater.

"Perseverance Valley is a special place, like having a new mission again after all these years," said Opportunity Deputy Principal Investigator Ray Arvidson of Washington University in St. Louis. "We already knew it was unlike any place any Mars rover has seen before, even if we don't yet know how it formed, and now we're seeing surfaces that look like stone stripes. It's mysterious. It's exciting. I think the set of observations we'll get will enable us to understand it."

On some slopes within the valley, the soil and gravel particles appear to have become organized into narrow rows or corrugations, parallel to the slope, alternating between rows with more gravel and rows with less.

The origin of the whole valley is uncertain. Rover-team scientists are analyzing various clues that suggest actions of water, wind or ice. They are also considering a range of possible explanations for the stripes, and remain uncertain about whether this texture results from processes of relatively modern Mars or a much older Mars.

Other lines of evidence have convinced Mars experts that, on a scale of hundreds of thousands of years, Mars goes through cycles when the tilt or obliquity of its axis increases so much that some of the water now frozen at the poles vaporizes into the atmosphere and then becomes snow or frost accumulating nearer the equator.

"One possible explanation of these stripes is that they are relics from a time of greater obliquity when snow packs on the rim seasonally melted enough to moisten the soil, and then freeze-thaw cycles organized the small rocks into stripes," Arvidson said. "Gravitational downhill movement may be diffusing them so they don't look as crisp as when they were fresh."

Bernard Hallet of the University of Washington, Seattle, agrees the alignments seen in images of Perseverance Valley are not as distinctive as the stone stripes he has studied on Earth. Field measurements on Earth, near the summit of Hawaii's Mauna Kea where the soil freezes every night but is often dry, have documented how those form when temperature and ground conditions are right: Soils with a mix of silt, sand and gravel expand more where the finer-grain material is most prevalent and retains more water. Freezing expands the soil, pushing larger particles up. If they move to the side, as well as down the general slope, due to gravity or wind, they tend to move away from the finer-grain concentrations and stretch out downslope. Where larger particles become more concentrated, the ground expands less. The process repeats hundreds or thousands of times, and the pattern self-organizes into alternating stripes.

Perseverance Valley holds rocks carved by sand blowing uphill from the crater floor, and wind might also be the key in sorting larger particles into rows parallel to the slope.

"Debris from relatively fresh impact craters is scattered over the surface of the area, complicating assessment of effects of wind," said Opportunity science-team member Robert Sullivan of Cornell University, Ithaca, New York. "I don't know what these stripes are, and I don't think anyone else knows for sure what they are, so we're entertaining multiple hypotheses and gathering more data to figure it out."