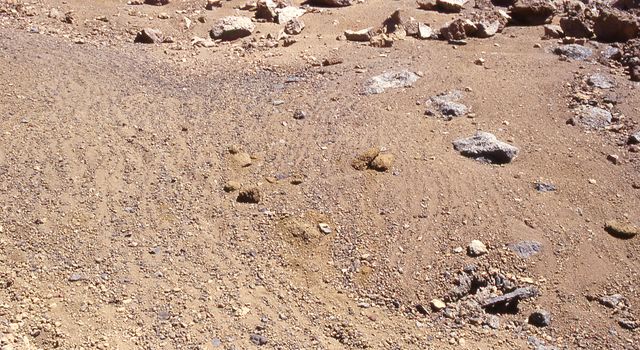 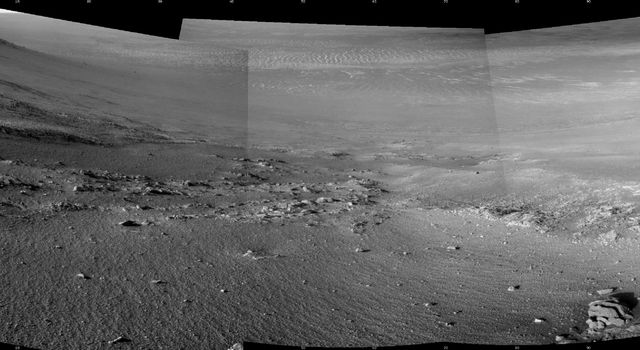 This late-afternoon view from the front Hazard Avoidance Camera on NASA's Mars Exploration Rover Opportunity shows a pattern of rock stripes on the ground, a surprise to scientists on the rover team. Approaching the 5,000th Martian day or sol, of what was planned as a 90-sol mission, Opportunity is still providing new discoveries.

This image was taken inside "Perseverance Valley," on the inboard slope of the western rim of Endeavour Crater, on Sol 4958 (Jan. 4, 2018). Both this view and one taken the same sol by the rover's Navigation Camera look downhill toward the northeast from about one-third of the way down the valley, which extends about the length of two football fields from the crest of the rim toward the crater floor.

The lighting, with the Sun at a low angle, emphasizes the ground texture, shaped into stripes defined by rock fragments. The stripes are aligned with the downhill direction. The rock to the upper right of the rover's robotic arm is about 2 inches (5 centimeters) wide and about 3 feet (1 meter) from the centerline of the rover's two front wheels.

This striped pattern resembles features seen on Earth, including on Hawaii's Mauna Kea, that are formed by cycles of freezing and thawing of ground moistened by melting ice or snow. There, fine-grained fraction of the soil expands as it freezes, and this lifts the rock fragments up and to the sides. If such a process formed this pattern in Perseverance Valley, those conditions might have been present locally during a period within the past few million years when Mars' spin axis was at a greater tilt than it is now, and some of the water ice now at the poles was redistributed to lower latitudes. Other hypotheses for how these features formed are also under consideration, including high-velocity slope winds.