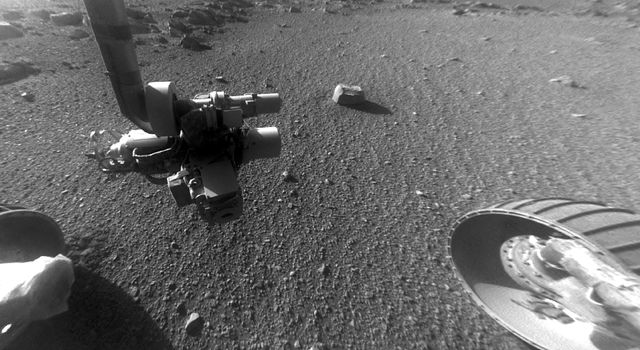 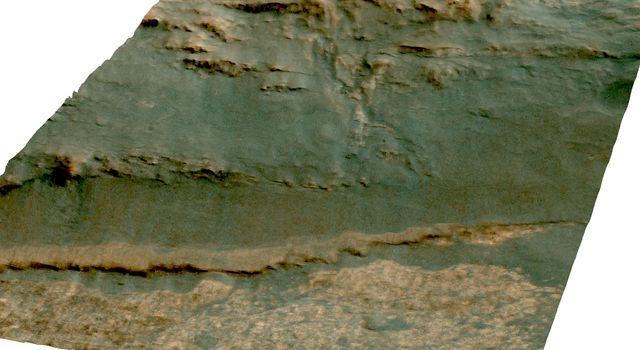 Textured rows on the ground in this portion of "Perseverance Valley" are under investigation by NASA's Mars Exploration Rover Opportunity, which used its Navigation Camera (Navcam) to take the component images of this downhill-looking scene.

The rover took this image on Jan. 4, 2018, during the 4,958th Martian day, or sol, of its work on Mars, looking downhill from a position about one-third of the way down the valley. Perseverance Valley descends the inboard slope of the western rim of Endeavour Crater. A view on the same sol with the rover's front Hazard Avoidance Camera includes ground even closer to the rover at this site. Opportunity was still working close by as it reached the mission's Sol 5,000 (Feb. 16, 2018).

In the portion of the valley seen here, soil and gravel have been shaped into a striped pattern in the foreground and partially bury outcrops visible in the midfield. The long dimensions of the stripes are approximately aligned with the downhill direction. The striped pattern resembles a type of feature on Earth (such as on Hawaii's Mauna Kea) that is caused by repeated cycles of freezing and thawing, though other possible origins are also under consideration for the pattern in Perseverance Valley.

The view is spans from north on the left to east-southeast on the right. For scale, the foreground rock clump in the lower right is about 11 inches (28 centimeters) in width.