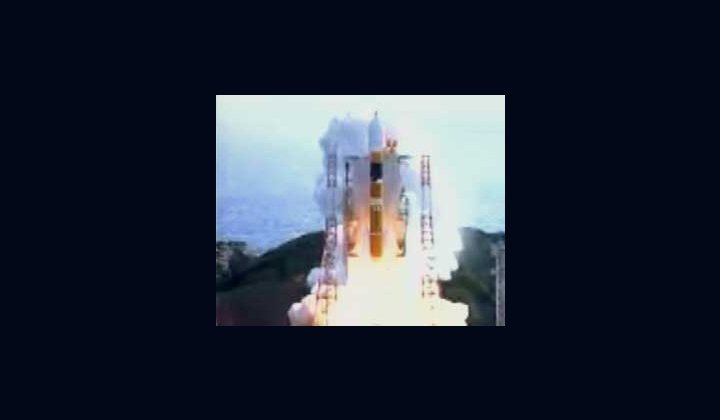 Launch of Adeos 2, with SeaWinds instrument on boardImage copyright of NASDA

Weather and climate forecasters will double their pleasure, thanks to today's successful launch of NASA's SeaWinds scatterometer instrument.

Weather and climate forecasters will double their pleasure, thanks to today's successful launch of NASA's SeaWinds scatterometer instrument. The instrument, which launched at 5:31 p.m. Pacific Time from Japan's Tanegashima Space Center, joins another satellite already in orbit to measure wind speed and direction over Earth's oceans.

The SeaWinds scatterometer, developed and managed by NASA's Jet Propulsion Laboratory, Pasadena, Calif., will complement and eventually replace a second, identical instrument that has been orbiting since June 1999 aboard NASA's Quick Scatterometer (QuikScat) satellite. Its three- to five-year mission will augment a long-term ocean surface wind data series that began in 1996 with the launch of the NASA Scatterometer aboard the National Space Development Agency of Japan's Advanced Earth Observing Satellite (Adeos) spacecraft. This newest SeaWinds instrument is aboard Japan's Adeos 2 spacecraft. The Japanese Space Agency is a partner on SeaWinds, along with the National Oceanic and Atmospheric Administration (NOAA).

Climatologists, meteorologists and oceanographers use these detailed snapshots of ocean winds in conjunction with data from other Earth-monitoring satellites from NASA and other U.S. and international entities to understand and predict severe weather patterns, climate change and global weather abnormalities like El Nino.

Riding a 17-story-high, two-stage Japanese HII-A rocket launched from Japan's Tanegashima Space Center, 115 kilometers (71.5 miles) south of Kyushu, SeaWinds on Adeos 2 headed south over the Pacific Ocean and separated from the rocket's second stage approximately 16-1/2 minutes later over the ocean between the Philippines and Indonesia on its way to a circular, near-polar orbit about 800 kilometers (500 miles) above Earth. Initial telemetry reports received by the Adeos 2 team show the spacecraft to be in excellent health. The SeaWinds instrument will be powered on 27 days after launch and 17 days later will undergo a thorough checkout. A six-month calibration/validation phase will begin in mid April, with nominal science operations scheduled to begin in October 2003.

"In addition," Asrar said, "since SeaWinds maps Earth's land masses as well as its oceans, its data are being used in an increasing number of other applications, from production of daily maps of sea ice extent around Earth's poles; to measuring soil moisture content, vegetation and snow cover; and detecting regional flooding."

"With its ability to 'see' ocean level winds through clouds, data from SeaWinds on Adeos 2 will be an invaluable tool for hurricane tracking and high seas marine forecasting,"said Helen Wood, director of NOAA's Office of Satellite Data Processing and Distribution. "NOAA will quickly process the data for weather forecasting use by NOAA's National Weather Service, the Japanese Meteorological Agency as well as other national weather agencies around the world."

Scatterometers operate by transmitting high-frequency microwave pulses to the ocean surface and measuring the "backscattered," or echoed, radar pulses bounced back to the satellite. The instrument senses ripples caused by winds near the ocean's surface, from which scientists can compute wind speed and direction.