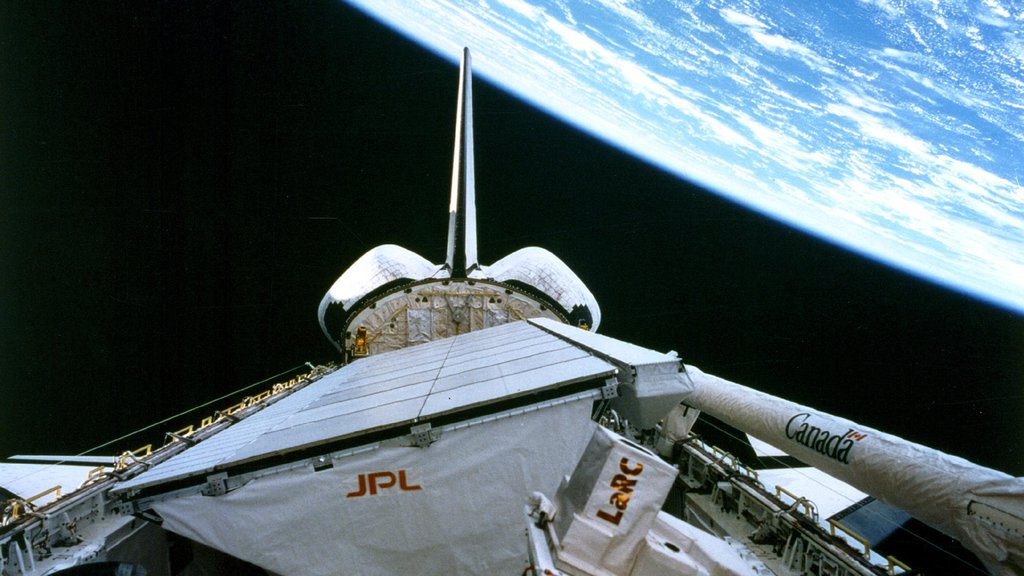 With SIR-C/X-SAR instruments mounted in the cargo bay atop the shuttle, the Endeavour crew flew upside down, using precise navigation, the hinge on the X-band antenna and "electronic steering" in the C- and L-band antennas to point the radars at "supersites" of scientific interest on Earth.› Full image and caption
Credit: NASA/JPL-Caltech

Oct. 11, 2019, marks the 25th anniversary of the end of a space mission that transformed the way we use radar to observe large-scale environmental processes on our home planet. The Spaceborne Imaging Radar-C and X-Band Synthetic Aperture Radar (SIR-C/X-SAR) mission made available to people worldwide the scientific data used to this day to inform decisions to slow and mitigate climate change.

The SIR-C instrument, built by NASA'S Jet Propulsion Laborator in Pasadena, California, and the X-SAR instrument, built by the German Aerospace Center (DLR), constituted the most advanced imaging radar system ever used in air or space. During hundreds of orbits on two flights aboard the Space Shuttle Endeavour, in April and October 1994, the radar system made multiple passes over 19 "supersites" - areas of scientific interest in such locations as the Sahara, Brazil, the Alps and the Gulf Stream. It also imaged events occurring during the flights, such as as a volcano erupting in Russia.

"The many innovationsof SIR-C/X-SAR have been used in virtually every air- and spaceborne radar mission since, starting with NASA's Shuttle Radar Topography Mission, which mapped 80% of the Earth in 2000," said Tony Freeman, now manager of JPL's Innovation Foundry, who led end-to-end calibration of SIR-C. "DLR's TerraSAR-X and TanDEM-X missions have since filled remaining gaps."

Radar imaging of Earth has never been the same since SIR-C/X-SAR's demonstration of what's known as simultaneous multifrequency, fully polarized, repeat-pass interferometric SAR. To unpack that sizable trunk of terminology, let's start with "synthetic aperture radar": Since the late 1970s, NASA has been imaging Earth with radar - in darkness, under cloud cover or vegetation, even underground - using the movements of a host airplane or spacecraft to "synthesize" an "aperture" much larger than the antenna itself. The larger the aperture, the greater the image resolution. Indeed, SIR-C's predecessors, SIR-A and SIR-B, were synthetic aperture radar missions.

However, unlike SIR-C/X-SAR, neither predecessor made radar observations simultaneously in three frequencies - C-, L- and X-band - using three adjacent antennas combined into a massive, 12-by-4-meter, 11.5-ton structure. That advance, analogous to the leap from black-and-white to color film, allowed the mission to collect data in different scales, providing a crisp snapshot of each targeted feature, unmuddied by possible changes over time.

In addition to multiple frequencies, some observations were made in multiple "polarizations." Radio frequency waves can be either horizontal (in a wavy plane parallel to the ground) or vertical (in a plane perpendicular to the ground). The C- and L-band antennas could send and receive waves of both horizontal and vertical polarization. Using this "fully polarized" data, scientists can separate out the scattering of radar waves to distinguish, for example, vegetated from unvegetated terrain.

SIR-C/X-SAR wanted to capture changes over time; that's why it flew on shuttle flights six months apart. To observe the same supersites during both flights and to make consistent daily passes over them, the shuttle crew used sophisticated algorithms to navigate the spacecraft in precise orbits as close as 10 meters apart. And they did this flying upside down, since the cargo bay holding the instruments was on top of the shuttle. While the X-band antenna had a hinge, the C- and L-band antennas were fixed at a particular angle, but they had "electronic steering" that allowed them to "see" to either side of what was right in front of them.

Those repeated, slightly offset passes over the same terrain were essential for the data-processing technique of interferometry. Combining views, interferometry creates detailed, 3D topographical images of a target at the moment of simultaneous observations. And it can reveal even minute changes in the target between successive observations - like the gradual creep of an earthquake fault or the movement of an ice sheet. 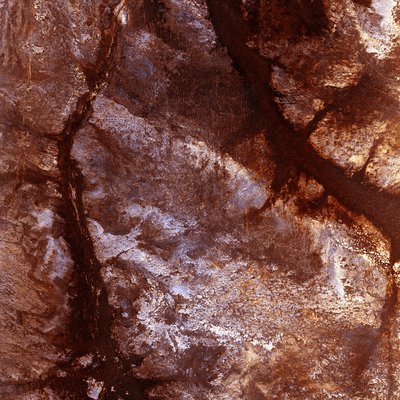 These ancient river channels, invisible to the human eye beneath the deep, dry sand of the Sahara Desert, were revealed for the first time by SIR-C/X-SAR instruments during their second shuttle flight in October 1994.
Credit: NASA/JPL-Caltech
Full image and caption

The SIR-C/X-SAR dataset proved immediately useful, revealing, for instance, ancient riverbeds beneath the Sahara - an artifact of preindustrial climate change - and remains in high demand.

"SIR-C/X-SAR was the path opener for multiple U.S. and international missions that followed," said Charles Elachi, the mission's principal investigator before he became director of JPL. "Imaging of subsurface river channels in the Eastern Sahara enabled new understanding of the environmental history of that and other arid regions. Using multiple frequencies enabled for the first time 'color' radar images that have been used extensively to map vegetation and forests and extract their vegetation content. Using repeat-pass interferometry enabled us for the first time to map surface motion at the centimeter level. This technique is now commonly used to map motions resulting from earthquakes, volcanic eruptions and other natural disasters."

Freeman agrees: "SIR-C/X-SAR was innovative on so many fronts: We knew what we were working on was something special, but we didn't know at the time how many firsts the mission would rack up".

The NASA Image and Video Library makes mission data available to researchers worldwide. The University of Michigan hosts a search tool for accessing its own vast SIR-C/X-SAR database. And in its MapReady tool the University of Alaska Satellite Facility has processed the data for compatibility with multiple computer platforms. 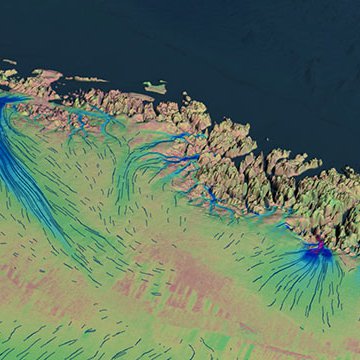 Using the technique of interferometric SAR first demonstrated on SIR-C/X-SAR, four international space agencies cooperated to combine many years' worth of radar observations over the Greenland ice sheet to map its depth and accelerating speed of loss.
Credit: Courtesy of NASA/GSFC/Jefferson Beck
Larger view

SIR-C/X-SAR was a collaboration of NASA, DLR and the Italian Space Agency (ASI), which contributed to the ground segment for X-SAR observations. JPL managed the mission for NASA. DLR was responsible for calibration, operations and data processing for X-SAR.