Assembly Begins on NASA’s Next Tool to Study Exoplanets 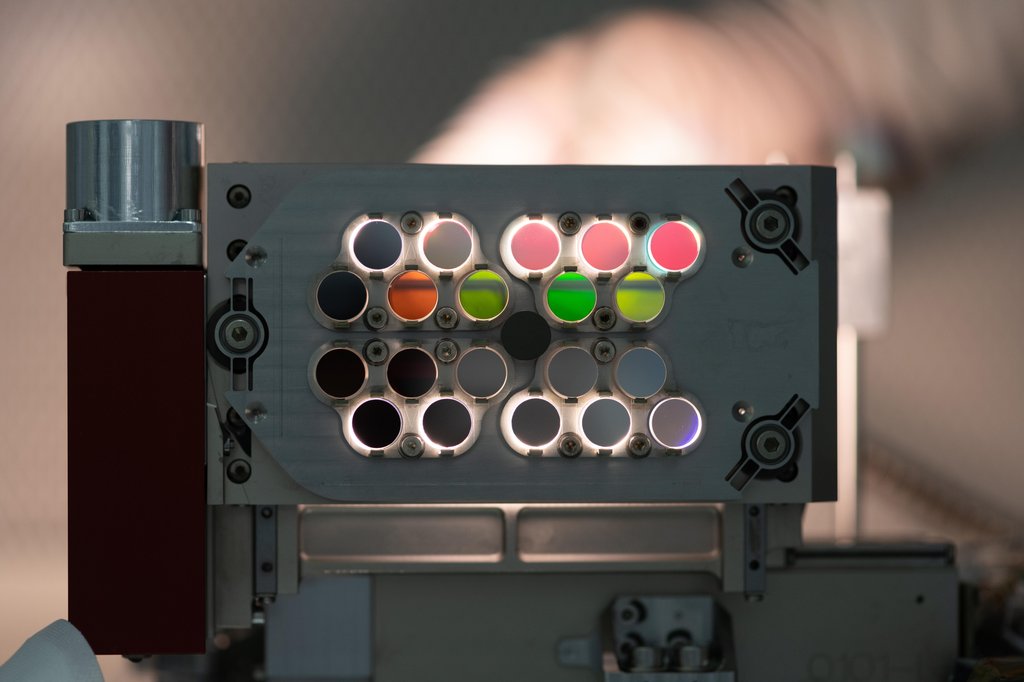 The filters on NASA's Roman Space Telescope Coronagraph Instrument's Color Filter Assembly each block all but a specific wavelength of light. Many of the filters appear dark in this photo because they are transparent only to infrared light.
Credit: NASA/JPL-Caltech
Full Image Details 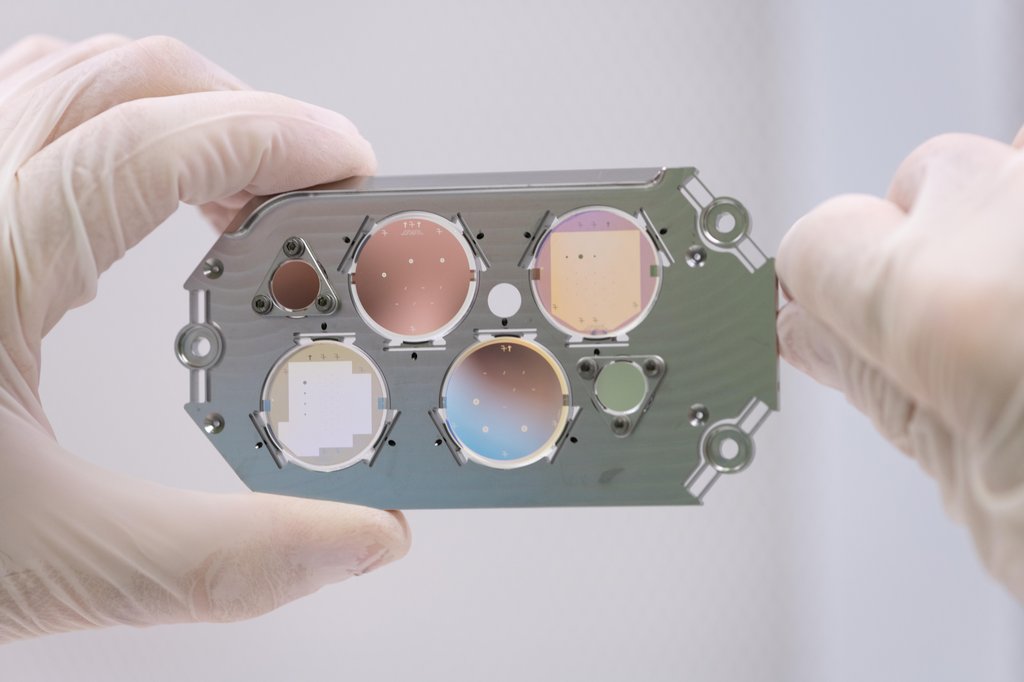 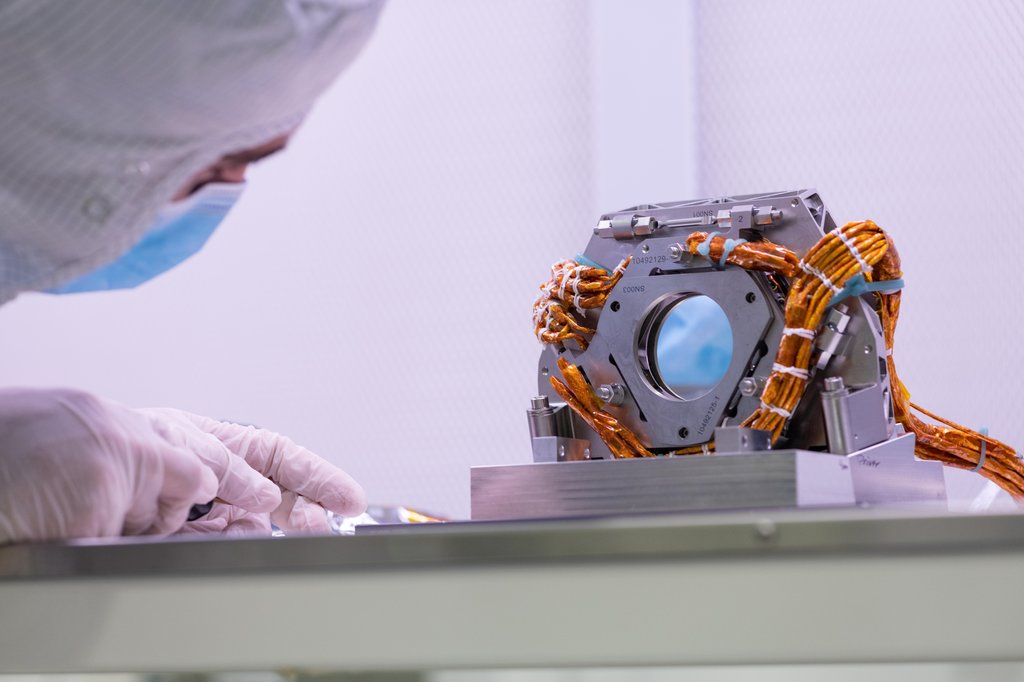 The Coronagraph Instrument on NASA’s Nancy Grace Roman Space Telescope will study planets around other stars. Putting it together will require a highly choreographed dance.

Scientists have discovered more than 5,000 exoplanets, or planets outside our solar system. As technologies for studying these worlds continue to advance, researchers may someday be able to search for signs of life on exoplanets that are similar in size, composition, and temperature to Earth. But to do that they’ll need new tools, like those being tested on the Coronagraph Instrument on NASA’s Nancy Grace Roman Space Telescope. The instrument will block the light from each distant star it observes so that scientists can better see the planets around the star, and it will demonstrate technologies needed to eventually study potentially habitable planets with future missions.

The Coronagraph Instrument team has already designed the cutting-edge instrument and built the components. Now they have to put the pieces together and run tests to make sure they operate as intended. “It’s like all the separate tributaries are finally coming together to form the river,” said Jeff Oseas, product delivery manager for the Coronagraph Instrument’s optical subsystem at NASA’s Jet Propulsion Laboratory in Southern California.

The Coronagraph Instrument on NASA’s Roman Space Telescope is designed to block the light from a star and capture the much fainter light from orbiting planets. This video explains how the complex instrument works.

The process kicked off recently at JPL and will take more than a year. Once complete, the Coronagraph Instrument will be shipped to the agency’s Goddard Space Flight Center in Greenbelt, Maryland, and incorporated into the Roman observatory.

In 2018, Bedrosian started working on a set of assembly plans for something that’s never been built before. She and her team then spent another two years collaborating with various subject matter experts and project members to review and adjust the plan, ensuring all the pieces would come together on time and in the right order. The process will resemble a well-choreographed ballet that involves heavy duty cranes, lasers, and vacuum chambers the size of buses. 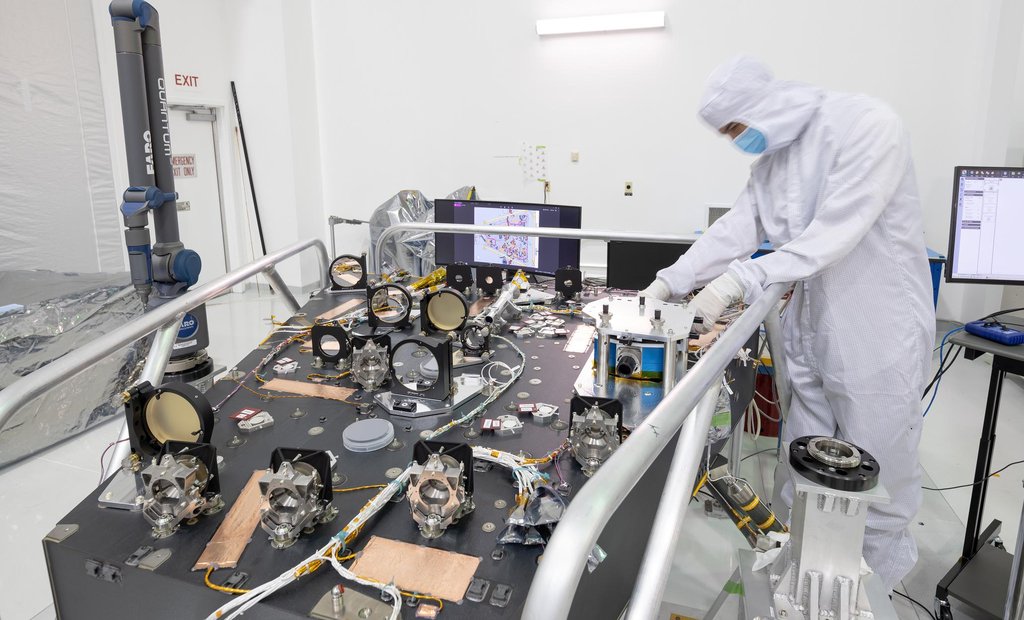 The Roman Coronagraph Instrument consists of two key sections, including the optical bench. Light from the telescope is directed through series of components that suppress light from a star while allowing the light from orbiting planets to pass through.
Credit: NASA/JPL-Caltech
Full Image Details 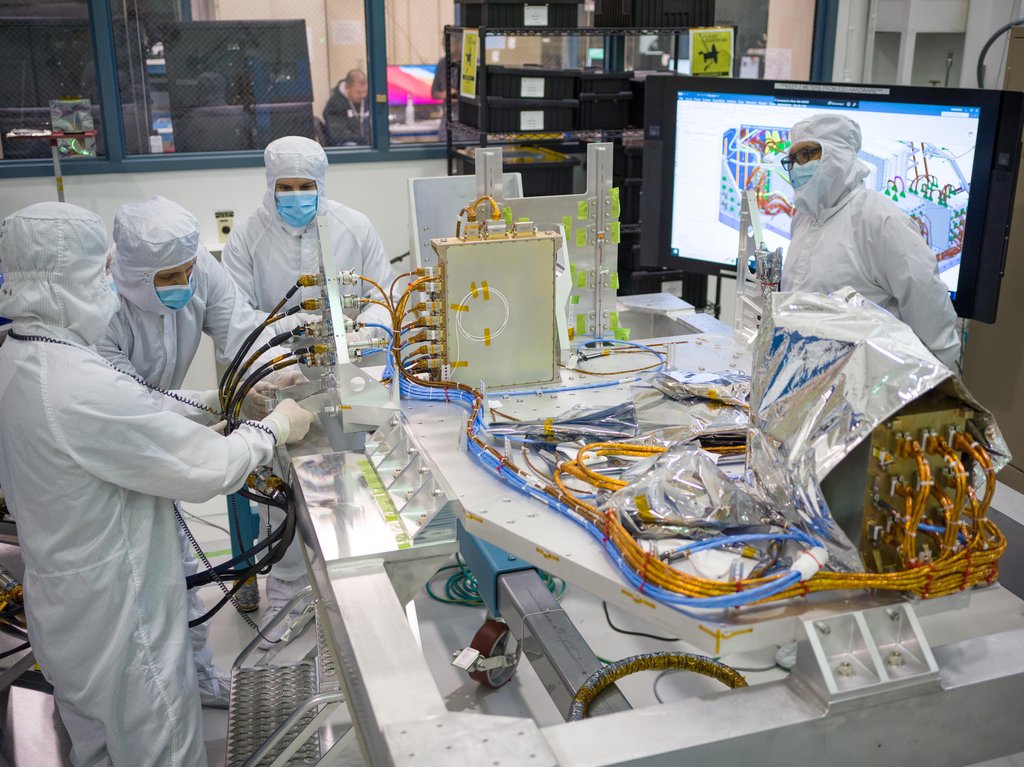 Roughly the size and shape of a baby grand piano, the Coronagraph Instrument is composed of two main sections that will stack on top of each another: the optical bench and the instrument electronics pallet.

The more delicate of the two is the optical bench, which contains 64 elements, such as mirrors and filters, designed to remove as much starlight as possible without suppressing the light from planets. This approach to finding and studying exoplanets is called direct imaging, and it is expected to be the best way to study the atmospheres and surface features of rocky worlds similar to Earth. Some of the optical components on the Coronagraph Instrument are so small they’re barely visible to the naked eye.

The pallet, or bottom layer, houses the electronics that receive instructions from the Roman spacecraft and return the Coronagraph Instrument’s scientific data. The electronics also control the mechanical components on the optical bench as well as the instrument heaters. The optical bench will be stacked by crane atop the electronics pallet. Because the two layers have to be aligned with each other to within a fraction of a millimeter, the team will use lasers to get them positioned just right over the course of four days.

Integration and testing teams will often use digital 3D models of the instrument to help make their plans, but nothing can compare to seeing the object in a real space. That’s why the coronagraph team made use of an augmented reality headset that lets users see a virtual projection of a 3D object and the world around them. The headset is also used by the Mars Curiosity rover team to see in 3D the Martian terrain that the rover drives over.

“We learned a lot from that exercise,” said Bedrosian. “We could get a sense of how tight the access would be at certain points of integration by literally laying on the floor and getting visuals of under the instrument. It showed us when it would be beneficial to lift the entire instrument with a crane, or if we were going to need a specialized tool to do our work at that angle. It helped make a lot of our plans safer and simpler.”

Once assembled, the Coronagraph Instrument will undergo a series of tests, including almost a month of dynamical testing to simulate the rocket ride into space. It will then be put in a vacuum chamber that replicates the space environment to check that the hardware remains aligned and operating correctly.

“It’s exciting to finally start putting all the pieces together,” said Bedrosian. “It’s definitely a delayed gratification, because we’ve spent so long preparing. But now that we’re here and my team members are talking about the hardware arriving, I can hear the excitement in their voices.”

The Roman Coronagraph Instrument was designed and is being built at JPL, which manages the instrument for NASA. Contributions were made by ESA (the European Space Agency), the Japanese Aerospace Exploration Agency (JAXA), the French space agency Centre National d’Études Spatiales (CNES), and the Max Planck Institute for Astronomy (MPIA) in Germany. Caltech, in Pasadena, California, manages JPL for NASA.

For more information about the Roman telescope, visit: