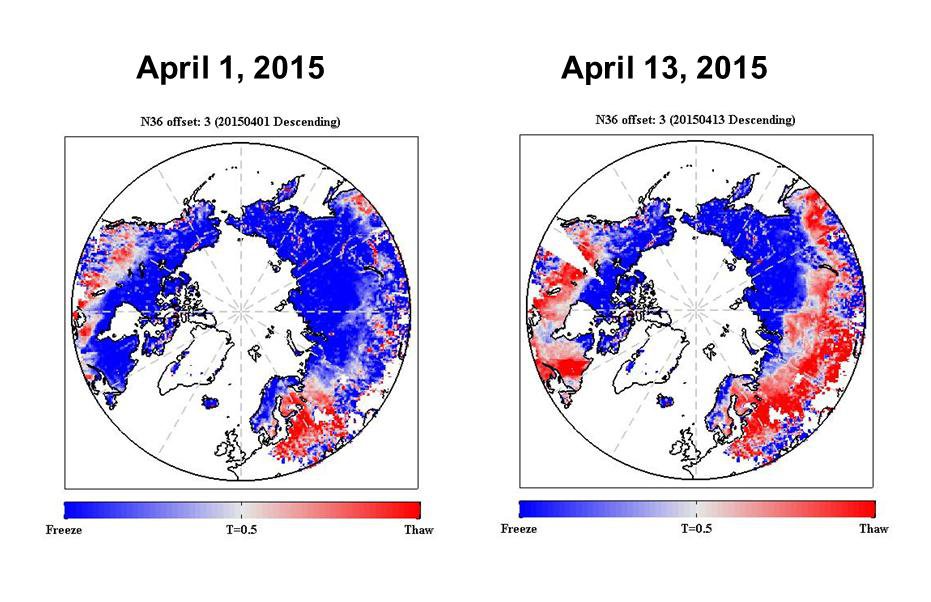 Click on an individual image for higher resolution image

The radar measurements made by NASA's Soil Moisture Active Passive (SMAP) observatory are sensitive to whether land surfaces are frozen or thawed. As liquid water freezes in soil, the water molecules become bound in a crystalline lattice, which changes how the incoming radar energy from SMAP interacts with Earth's surface, compared to soil containing freely oriented liquid water molecules.

SMAP's radar measurements will be used to provide a 1.9-mile- (3-kilometer) resolution daily classification of whether soils are frozen or solid for land areas north of 45 degrees North latitude. Initial data from SMAP capture the 2015 spring thaw progression over the northern hemisphere, with a thaw front extending from predominantly non-frozen southern latitudes to the still-frozen north. Shades of red indicate regions where the landscape is thawed; shades of blue correspond to frozen areas. The transition from frozen to thawed conditions is evident over extensive regions between the two images, acquired April 1 and April 13. For instance, the progression of melt northward across Alaska is evident, along with changes across the boreal forests of northern Canada. Large areas of Russia also changed from frozen to thawed. The SMAP radar measurements indicate frozen soil conditions for some regions near the southern edge of the maps (in the United States and Eurasia), even though these regions are now thawed. This is a result of the influence of other characteristics of the land surface, such as soil moisture, on the radar signal. These mid-latitude regions also undergo a much more moderate freeze cycle each winter, which weakens the SMAP radar's sensitivity to the freeze/thaw state in these areas.

When the soil thaws across boreal forests, the trees become productive and act as a carbon sink, removing carbon dioxide from the atmosphere. Precisely identifying the timing of the spring transition from frozen soil to thawed soil is important because it marks the start of the growing season across regions that experience soil freeze during the winter. The timing of spring thaw is the "on" switch for the uptake of carbon dioxide from the atmosphere. With the onset of the winter-freeze, the switch is turned off. Depending on the length of the vegetation growth season, a forest stand can be either a net carbon source or carbon sink in the global carbon budget. The timing and variability in landscape freeze/thaw also has an influence on the hydrology of the land surface because water from melting snow infiltrates into thawed soil but not into frozen soil.

Over the coming weeks, SMAP radar data will be processed to identify spatial patterns of the melt transition this spring and the timing and extent of periodic frost events. Measurements from an international network of surface stations will be used to help understand how and why the radar signal is responding to changes in the soil, as well as to potential influences from the overlying snow cover and vegetation. During the fall of 2015, SMAP measurements will identify the southward progression of the freezing front and onset of winter frozen conditions.