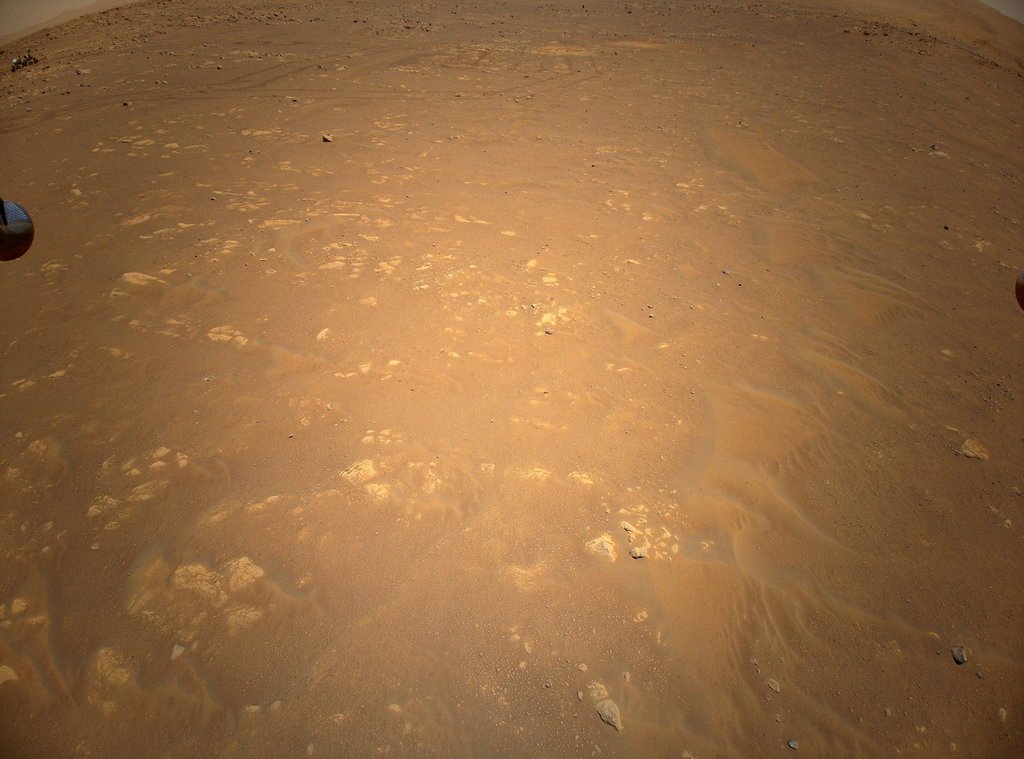 NASA’s Perseverance Mars rover is visible in the upper left corner of this image the agency’s Ingenuity Mars Helicopter took during its third flight, on April 25, 2021. The helicopter was flying at an altitude of 16 feet (5 meters) and roughly 279 feet (85 meters) from the rover at the time. Credit: NASA/JPL-Caltech Full Image Details

The Red Planet rotorcraft will extend its range, speed, and flight duration on Flight Four.

Keep up with the latest helicopter news in the mission blog.

Now that NASA’s Ingenuity Mars Helicopter has accomplished the goal of achieving powered, controlled flight of an aircraft on the Red Planet, and with data from its most recent flight test, on April 25, the technology demonstration project has met or surpassed all of its technical objectives. The Ingenuity team now will push its performance envelope on Mars. 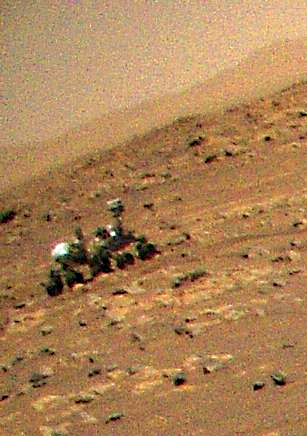 NASA’s Perseverance Mars rover is visible in the upper left corner of this image the agency’s Ingenuity Mars Helicopter took during its third flight, on April 25, 2021. The helicopter was flying at an altitude of 16 feet (5 meters) and roughly 279 feet (85 meters) from the rover at the time. Credit: NASA/JPL-Caltech Full Image Details

“From millions of miles away, Ingenuity checked all the technical boxes we had at NASA about the possibility of powered, controlled flight at the Red Planet,” said Lori Glaze, director of NASA’s Planetary Science Division. “Future Mars exploration missions can now confidently consider the added capability an aerial exploration may bring to a science mission.”

The Ingenuity team had three objectives to accomplish to declare the technology demo a complete success: They completed the first objective about six years ago when the team demonstrated in the 25-foot-diameter space simulator chamber of JPL that powered, controlled flight in the thin atmosphere of Mars was more than a theoretical exercise. The second objective – to fly on Mars – was met when Ingenuity flew for the first time on April 19. The team surpassed the last major objective with the third flight, when Ingenuity rose 16 feet (5 meters), flying downrange 164 feet (50 meters) and back at a top speed of 6.6 feet per second (2 meters per second), augmenting the rich collection of knowledge the team has gained during its test flight campaign.

“When Ingenuity’s landing legs touched down after that third flight, we knew we had accumulated more than enough data to help engineers design future generations of Mars helicopters,” said J. “Bob” Balaram, Ingenuity chief engineer at JPL. “Now we plan to extend our range, speed, and duration to gain further performance insight.”

Flight Four sets out to demonstrate the potential value of that aerial perspective. The flight test will begin with Ingenuity climbing to an altitude of 16 feet (5 meters) and then heading south, flying over rocks, sand ripples, and small impact craters for 276 feet (84 meters). As it flies, the rotorcraft will use its downward-looking navigation camera to collect images of the surface every 4 feet (1.2 meters) from that point until it travels a total of 436 feet (133 meters) downrange. Then, Ingenuity will go into a hover and take images with its color camera before heading back to Wright Brothers Field.

NASA’s Ingenuity Mars Helicopter takes off and lands in this video captured on April 25, 2021, by Mastcam-Z, an imager aboard NASA’s Perseverance Mars rover. As expected, the helicopter flew out of its field of vision while completing a flight plan that took it 164 feet (50 meters) downrange of the landing spot. Keep watching, the helicopter will return to stick the landing.

“To achieve the distance necessary for this scouting flight, we’re going to break our own Mars records set during flight three,” said Johnny Lam, backup pilot for the Ingenuity Mars Helicopter at JPL. “We’re upping the time airborne from 80 seconds to 117, increasing our max airspeed from 2 meters per second to 3.5 (4.5 mph to 8), and more than doubling our total range.”

After receiving the data from the fourth flight, the Ingenuity team will consider its plan for the fifth flight.

“We have been kicking around several options regarding what a flight five could look like,” said Balaram. “But ask me about what they entail after a successful flight four. The team remains committed to building our flight experience one step at a time.”

At NASA Headquarters, Dave Lavery is the program executive for the Ingenuity Mars Helicopter. At JPL, MiMi Aung is the project manager and Bob Balaram is chief engineer.

For more information about Ingenuity, go to:

For more about Perseverance, go to: