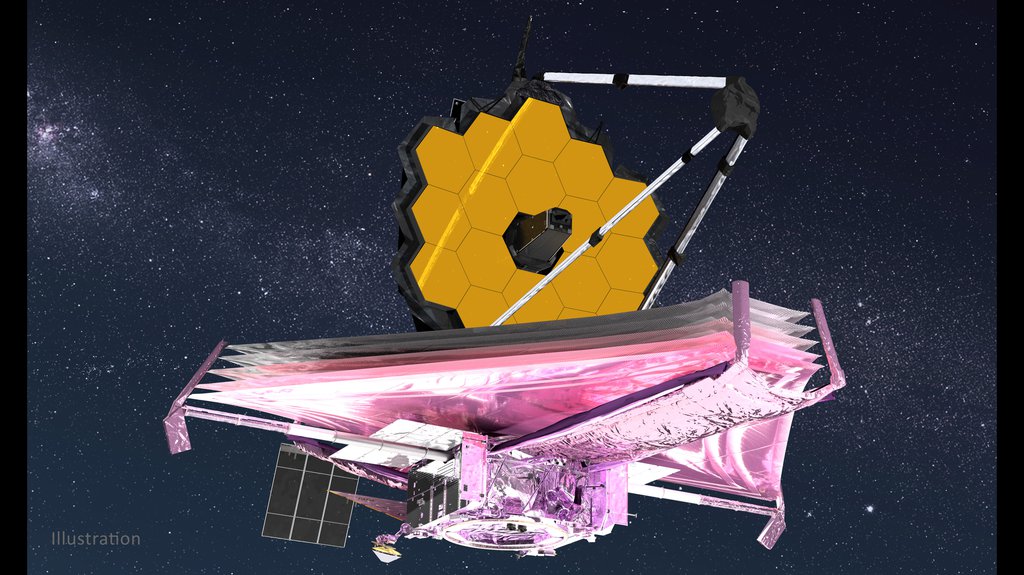 In this illustration, the multilayered sunshield on NASA’s James Webb Space Telescope stretches out beneath the observatory’s honeycomb mirror. The sunshield is the first step in cooling down Webb’s infrared instruments, but the Mid-Infrared Instrument (MIRI) requires additional help to reach its operating temperature.

With help from a cryocooler, the Mid-Infrared Instrument has dropped down to just a few degrees above the lowest temperature matter can reach and is ready for calibration.

NASA’s James Webb Space Telescope will see the first galaxies to form after the big bang, but to do that its instruments first need to get cold – really cold. On April 7, Webb’s Mid-Infrared Instrument (MIRI) – a joint development by NASA and ESA (European Space Agency) – reached its final operating temperature below 7 kelvins (minus 447 degrees Fahrenheit, or minus 266 degrees Celsius).

“The MIRI cooler team has poured a lot of hard work into developing the procedure for the pinch point,” said Analyn Schneider, project manager for MIRI at NASA’s Jet Propulsion Laboratory in Southern California. “The team was both excited and nervous going into the critical activity. In the end it was a textbook execution of the procedure, and the cooler performance is even better than expected.”

The low temperature is necessary because all four of Webb’s instruments detect infrared light – wavelengths slightly longer than those that human eyes can see. Distant galaxies, stars hidden in cocoons of dust, and planets outside our solar system all emit infrared light. But so do other warm objects, including Webb’s own electronics and optics hardware. Cooling down the four instruments’ detectors and the surrounding hardware suppresses those infrared emissions. MIRI detects longer infrared wavelengths than the other three instruments, which means it needs to be even colder.

Another reason Webb’s detectors need to be cold is to suppress something called dark current, or electric current created by the vibration of atoms in the detectors themselves. Dark current mimics a true signal in the detectors, giving the false impression that they have been hit by light from an external source. Those false signals can drown out the real signals astronomers want to find. Since temperature is a measurement of how fast the atoms in the detector are vibrating, reducing the temperature means less vibration, which in turn means less dark current.

MIRI’s ability to detect longer infrared wavelengths also makes it more sensitive to dark current, so it needs to be colder than the other instruments to fully remove that effect. For every degree the instrument temperature goes up, the dark current goes up by a factor of about 10.

Once MIRI reached a frigid 6.4 kelvins, scientists began a series of checks to make sure the detectors were operating as expected. Like a doctor searching for any sign of illness, the MIRI team looks at data describing the instrument’s health, then gives the instrument a series of commands to see if it can execute tasks correctly. This milestone is the culmination of work by scientists and engineers at multiple institutions in addition to JPL, including Northrop Grumman, which built the cryocooler, and NASA’s Goddard Space Flight Center, which oversaw the integration of MIRI and the cooler to the rest of the observatory.

“We spent years practicing for that moment, running through the commands and the checks that we did on MIRI,” said Mike Ressler, project scientist for MIRI at JPL. “It was kind of like a movie script: Everything we were supposed to do was written down and rehearsed. When the test data rolled in, I was ecstatic to see it looked exactly as expected and that we have a healthy instrument.”

There are still more challenges that the team will have to face before MIRI can start its scientific mission. Now that the instrument is at operating temperature, team members will take test images of stars and other known objects that can be used for calibration and to check the instrument’s operations and functionality. The team will conduct these preparations alongside calibration of the other three instruments, delivering Webb’s first science images this summer.

“I am immensely proud to be part of this group of highly motivated, enthusiastic scientists and engineers drawn from across Europe and the U.S.,” said Alistair Glasse, MIRI instrument scientist at the UK Astronomy Technology Centre (ATC) in Edinburgh, Scotland. “This period is our ‘trial by fire’ but it is already clear to me that the personal bonds and mutual respect that we have built up over the past years is what will get us through the next few months to deliver a fantastic instrument to the worldwide astronomy community.”

The James Webb Space Telescope is an international program led by NASA with its partners, ESA and the Canadian Space Agency.

MIRI was developed through a 50-50 partnership between NASA and ESA. JPL leads the U.S. efforts for MIRI, and a multinational consortium of European astronomical institutes contributes for ESA. George Rieke with the University of Arizona is the MIRI science team lead. Gillian Wright is the MIRI European principal investigator.