NASA’s Webb Telescope Will Have the Coolest Camera in Space 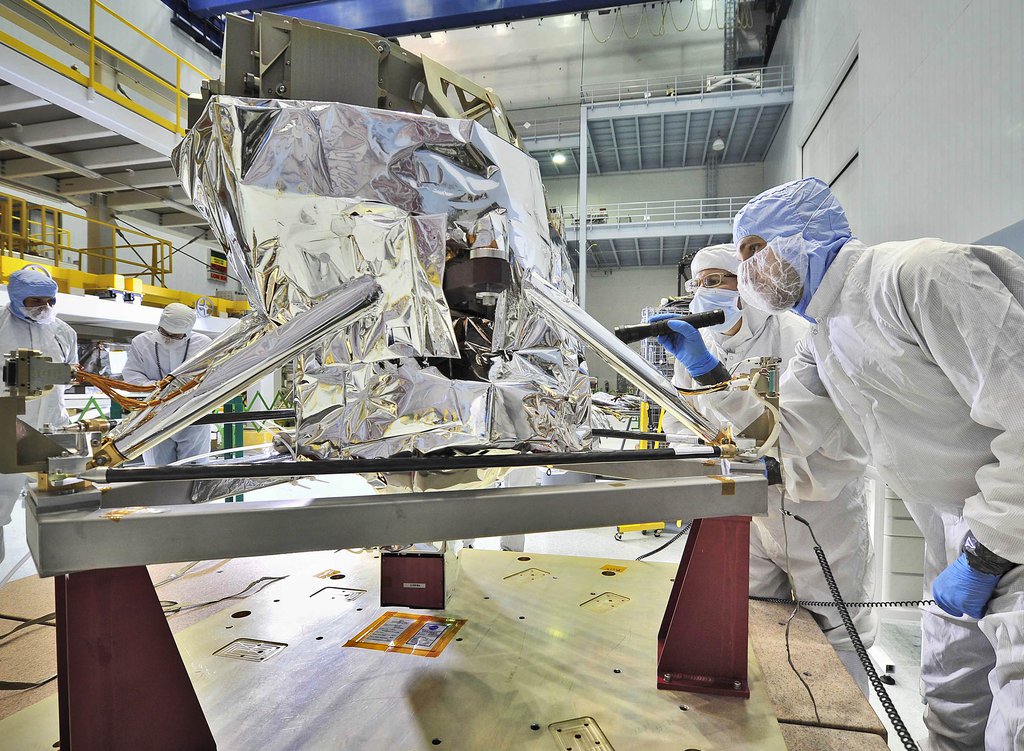 Engineers conduct a “receiving inspection” of the James Webb Space Telescope’s Mid-Infrared Instrument at NASA’s Goddard Space Flight Center after its journey from the United Kingdom. 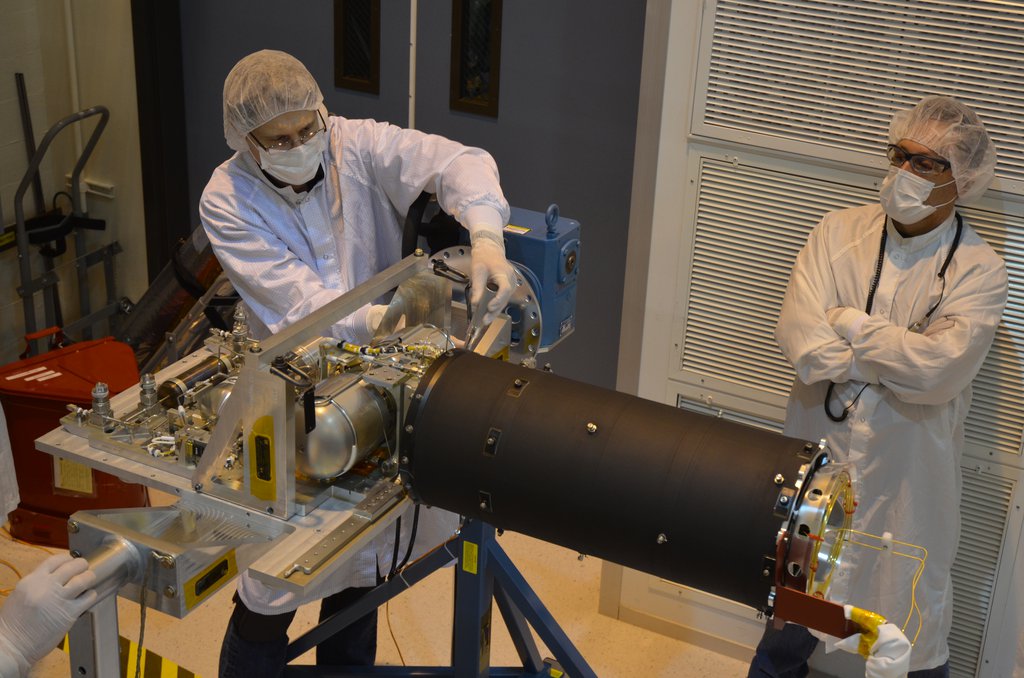 JPL flight technicians Johnny Melendez (right) and Joe Mora inspect the MIRI cryocooler before it was shipped to Northrop Grumman in Redondo Beach, California. There, the cooler was attached to the body of the Webb telescope. 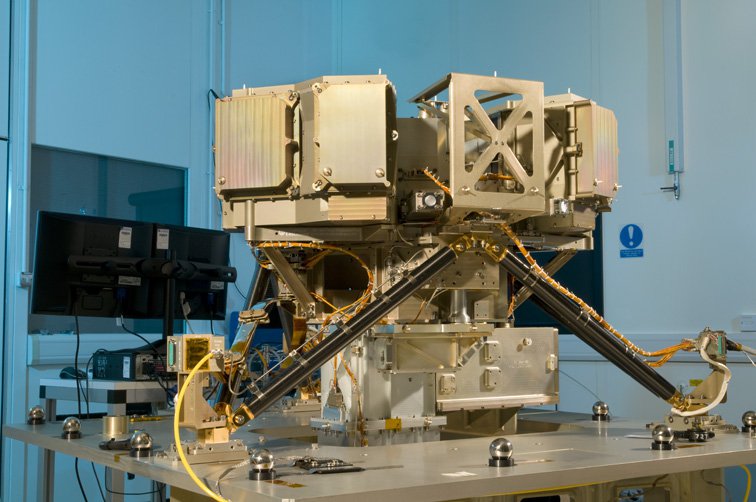 This portion of the MIRI instrument, seen here at the Rutherford Appleton Laboratory in the U.K., contains the infrared detectors. The cryocooler is positioned far from the detectors because it operates at a higher temperature. A tube carrying cold helium connects the two sections. 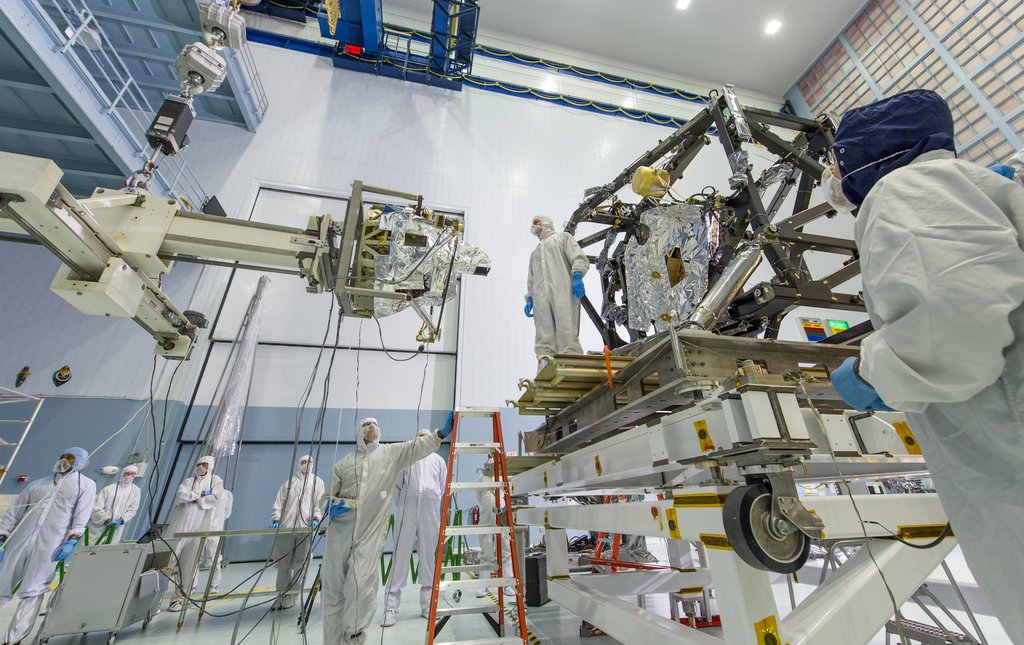 MIRI (left) sits on a balance beam at Northrop Grumman in Redondo Beach as engineers prepare to attach it to the Integrated Science Instrument Module (ISIM) using an overhead crane. ISIM is the heart of Webb and holds the telescope’s four science instruments.

Before the MIRI instrument – one of four scientific instruments aboard the observatory – can operate, it has to be cooled down to almost the coldest temperature matter can reach.

Set to launch on Dec. 24, NASA’s James Webb Space Telescope is the largest space observatory in history, and it has an equally gargantuan task: to collect infrared light from the distant corners of the cosmos, enabling scientists to probe the structures and origins of our universe and our place in it.

Many cosmic objects – including stars and planets, as well as the gas and dust from where they form – emit infrared light, sometimes called heat radiation. But so do most other warm objects, like toasters, humans, and electronics. That means Webb’s four infrared instruments can detect their own infrared glow. To reduce those emissions, the instruments have to be really cold – about 40 kelvins, or minus 388 degrees Fahrenheit (minus 233 degrees Celsius). But to operate properly, the detectors inside the mid-infrared instrument, or MIRI, will have to get even colder: less than 7 kelvins (minus 448 degrees Fahrenheit, or minus 266 degrees Celsius).

That’s just a few degrees above absolute zero (0 kelvins) – the coldest temperature theoretically possible, though it’s never physically attainable because it represents the total absence of any heat. (MIRI is not, however, the coldest imaging instrument ever to operate in space.)

Temperature is essentially a measurement of how fast atoms are moving, and in addition to detecting their own infrared light, the Webb detectors can be triggered by their own thermal vibrations. MIRI detects light in a lower-energy range than the other three instruments. As a result, its detectors are even more sensitive to thermal vibrations. These unwanted signals are what astronomers refer to as “noise,” and they can overwhelm the faint signals that Webb is trying to detect.

After launch, Webb will unfold a tennis-court-size sunshield that will block MIRI and the other instruments from the Sun’s heat, allowing them to cool passively. Beginning about 77 days after launch, MIRI’s cryocooler will spend 19 days lowering the temperature of the instrument’s detectors to less than 7 kelvins.

“It’s relatively easy to cool something down to that temperature on Earth, typically for scientific or industrial applications,” said Konstantin Penanen, a cryocooler specialist at NASA’s Jet Propulsion Laboratory in Southern California, which manages the MIRI instrument for NASA. “But those Earth-based systems are very bulky and energy inefficient. For a space observatory, we need a cooler that is physically compact, highly energy efficient, and it has to be highly reliable because we can’t go out and repair it. So those are the challenges we faced, and in that respect, I would say the MIRI cryocooler is certainly at the cutting edge.”

One of Webb’s big science goals will be to study the properties of the first generation of stars to form in the universe. Webb’s Near-Infrared Camera, or NIRCam instrument, will be able to detect these extremely distant objects, and MIRI will help scientists confirm that these faint sources of light are clusters of first-generation stars, rather than second-generation stars that form later as a galaxy evolves.

By peering through even thicker clouds of dust than the near-infrared instruments, MIRI will reveal the birthplaces of stars. It will also detect molecules that are common on Earth – like water, carbon dioxide, and methane, and those of rocky minerals like silicates – in cool environments around nearby stars, where planets may form. Near-infrared instruments are better at detecting these molecules as vapor in much hotter environments, while MIRI can see them as ices.

“By combining expertise from both the United States and Europe, we have developed MIRI as a powerful capability for Webb that will enable astronomers from all over the world to answer big questions about how stars, planets, and galaxies form and evolve,” said Gillian Wright, co-lead of the MIRI science team and the instrument’s European principal investigator at the UK Astronomy Technology Centre (UK ATC).

The MIRI cryocooler uses helium gas – enough to fill about nine party balloons – to carry heat away from the instrument’s detectors. Two electrically powered compressors pump the helium through a tube that extends to where the detectors are located. The tube runs through a block of metal that is also attached to the detectors; the cooled helium absorbs excess heat from the metal block, which in turn keeps the detectors at their operational temperature below 7 kelvins. The warmed (but still quite cold) gas then returns to the compressors, where it dumps the excess heat, and the cycle begins again. Fundamentally, the system is similar to those used in home refrigerators and air conditioners.

The tubing that carries the helium is made of gold-coated stainless steel and measures less than one-tenth of an inch (2.5 millimeters) in diameter. It extends about 30 feet (10 meters) from the compressors, located in a region called the spacecraft bus, to MIRI’s detectors, located in the Optical Telescope Element, behind the observatory’s honeycomb-shaped primary mirror. Hardware called the Deployable Tower Assembly, or DTA, connects these two regions. When packed for launch, the DTA is compressed, sort of like a piston, to help fit the stowed observatory into the protective faring that rides atop the rocket. Once in space, the tower will extend to separate the room-temperature spacecraft bus from the much colder Optical Telescope Instrument, and to allow the sunshield and telescope to fully deploy.

This animation shows the ideal execution of the James Webb Space Telescope’s deployments in the hours and days after launch. The extension of the central Deployable Tower Assembly will increase the distance between MIRI’s two segments. They are connected by a coiled tube carrying cooled helium.

But the elongation process requires the helium tubing to extend along with the Deployable Tower Assembly. So the tube is coiled like a spring, which is why MIRI engineers nicknamed this portion of the tube the “Slinky.”

“There were a couple of challenges working on a system that spans multiple regions of the observatory,” said Analyn Schneider, MIRI’s project manager at JPL. “Those different regions are led by different organizations or centers, including Northrop Grumman and NASA’s Goddard Space Flight Center, and we had to interface with everybody. There’s no other hardware on the telescope that requires that, so that was a challenge unique to MIRI. It’s definitely been a long road for the MIRI cryocooler, and we’re ready to see it perform in space.”

The James Webb Space Telescope will be the world's premier space science observatory when it launches in 2021. Webb will solve mysteries in our solar system, look beyond to distant worlds around other stars, and probe the mysterious structures and origins of our universe and our place in it. Webb is an international program led by NASA with its partners, ESA (European Space Agency) and the Canadian Space Agency.

MIRI was developed through a 50-50 partnership between NASA and ESA (European Space Agency). JPL leads the U.S. efforts for MIRI, and a multi-national consortium of European astronomical institutes contributes for ESA. George Rieke with the University of Arizona is the MIRI US science team lead. Gillian Wright is MIRI European science team lead.

Alistair Glasse with UK ATC is the MIRI instrument scientist, and Michael Ressler is the U.S. project scientist at JPL. Laszlo Tamas with UK ATC manages the European Consortium. The MIRI cryocooler development was led and managed by JPL, in collaboration with NASA’s Goddard Space Flight Center in Greenbelt, Maryland, and Northrop Grumman in Redondo Beach, California.