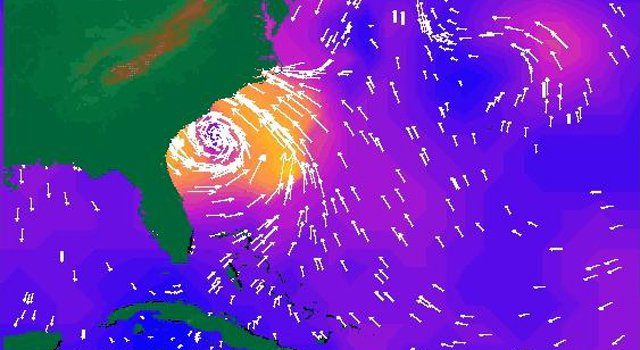 The SeaWinds scatterometer on NASA's QuikScat satellite stares into the eye of 1999's Hurricane Floyd as it hits the U.S. coast. The arrows indicate wind direction, while the colors represent wind speed, with orange and yellow being the fastest. NASA/JPL-Caltech

The ocean covers 71 percent of Earth's surface and affects weather over the entire globe. Hurricanes and storms that begin far out over the ocean affect people on land and interfere with shipping at sea. And the ocean stores carbon and heat, which are transported from the ocean to the air and back, allowing for photosynthesis and affecting Earth's climate. To understand all these processes, scientists need information about winds near the ocean's surface.

NASA's ISS-RapidScat, launching to the International Space Station this fall, will watch those winds with a tried and true instrument called a scatterometer. Since satellite scatterometers began collecting data in the 1970s, their soundings have become essential to our understanding of Earth's ocean winds.

Scatterometers send microwave pulses to Earth's surface at an angle. A smooth ocean surface reflects most of the energy like a mirror, away from the satellite, but strong waves scatter some of the signal back toward the spacecraft. From the strength of this backscatter, scientists can estimate the speed and direction of wind at the ocean's surface.

"Before scatterometers, we could only measure ocean winds on ships, and sampling from ships is very limited," said Timothy Liu of NASA's Jet Propulsion Laboratory in Pasadena, California, who led the science team for NASA's QuikScat mission.

Scatterometry began to emerge during World War II, when scientists realized wind disturbing the ocean's surface caused noise in their radar signals. NASA included an experimental scatterometer in its first space station in 1973 and again when it launched its SeaSat satellite in 1978. During its three-month life, SeaSat's scatterometer provided scientists with more individual wind observations than ships had collected in the previous century.

"We had to build the SeaWinds instrument using spare parts and do it very fast," Liu said. "It was only meant to be a gap-filler. But then it lasted for 10 years."

QuikScat provided its full range of data until its antenna stopped spinning in 2009, significantly reducing the amount of Earth's surface it measured. But the data it continues to collect are now used to calibrate measurements from other satellites.

"We tipped QuikScat slightly so it was at the same angle as the Indian scatterometer, OSCAT, and continued to do that throughout the whole OSCAT mission," said JPL's Phil Callahan, the data products manager for QuikScat. Cross-calibrating new instruments like OSCAT with existing ones ensures that the new data can be combined seamlessly with the old, allowing researchers to examine long-term trends.

When NASA's ISS-RapidScat mission begins collecting data this fall, it will add data to the same archive.

"OSCAT stopped working earlier this year, so RapidScat's presence is very important," said Howard Eisen, the RapidScat project manager at JPL. "We can transfer the calibration standard from QuikScat to RapidScat, which can then pass it on to future scatterometers, making a continuous, 15-plus year record."

As with QuikScat, JPL engineers built RapidScat in less than two years. The mission combines new industrial-grade hardware and older inherited hardware used to develop and test QuikScat, and was developed for just $26 million. QuikScat will calibrate the new mission as well.

Also as with QuikScat, RapidScat is meant to be a "gap-filler" on its two-year mission. Another scatterometer from the Indian Space Research Organization is scheduled to join RapidScat in orbit in the next two years. RapidScat will be the last scatterometer built from SeaWinds materials, but likely not the last in a growing record of Earth's winds over the ocean.

"Including RapidScat, we've gotten three scatterometers and more than 10 years of data from the SeaWinds project," Callahan said.

ISS-RapidScat is one of five new NASA missions launching in 2014. NASA monitors Earth's vital signs from land, air and space with a fleet of satellites and ambitious airborne and ground-based observation campaigns. NASA develops new ways to observe and study Earth's interconnected natural systems with long-term data records and computer analysis tools to better see how our planet is changing. The agency shares this unique knowledge with the global community and works with institutions in the United States and around the world that contribute to understanding and protecting our home planet.