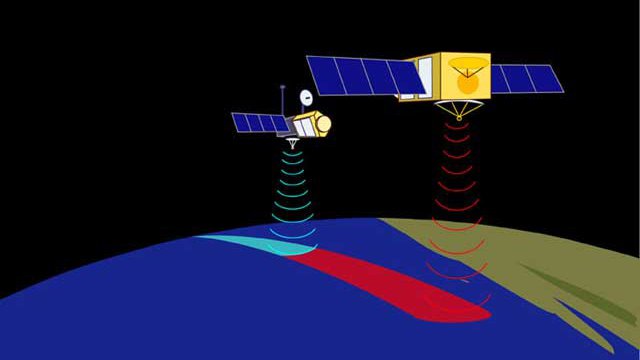 Take one well-seasoned oceanography satellite, the joint NASA-Centre National d'Etudes Spatiales (French Space Agency) Topex/Poseidon, nearing its 11th year in orbit to study the world's ocean circulation and its effect on climate, mix in a fresh sibling satellite, Jason, and add a dash of ingenuity, and you get what scientists are calling the Jason-Topex/Poseidon tandem mission.

Take one well-seasoned oceanography satellite, the joint NASA-Centre National d'Etudes Spatiales (French Space Agency) Topex/Poseidon, nearing its 11th year in orbit to study the world's ocean circulation and its effect on climate, mix in a fresh sibling satellite, Jason, and add a dash of ingenuity, and you get what scientists are calling the Jason-Topex/Poseidon tandem mission.

Since last September, when the older spacecraft was maneuvered into a tightly spaced orbit with Jason's, the two have engaged in a spicy experimental orbital tango. The spacecraft are serving up exceptionally high-resolution data on the height of the world's ocean surfaces, a key measure of heat storage in the ocean, which influences weather and future planetary climate events. The experimental tandem mission data will help scientists better detect and understand ocean currents, tides and eddies.

In a paper in the American Geophysical Union newsletter Eos, Dr. Lee-Lueng Fu, project scientist for the Jason and Topex/Poseidon missions at NASA's Jet Propulsion Laboratory, Pasadena, Calif., reports the mission is producing ocean surface topography data that reveal twice as many details as seen before.

"The Jason-Topex/Poseidon tandem mission doubles the resolution of ocean surface topography data, creating a continuous, simultaneous record of superior-quality radar measurements that will be used to map ocean surface current speed and direction, revealing important new information about these energetic swirls that are often too small to be resolved by a single satellite," Fu said. "Tandem mission data will allow scientists to revise ocean models, improving their ability to predict ocean currents in the future."

Artist's concept of Jason and Topex/Poseidon working in tandem.

Fu said data from the mission are expected to improve our knowledge of ocean tides in coastal and other shallow-water regions, the changing transports of boundary currents, the horizontal transport of heat in the oceans and other climate-relevant properties. Also, it may validate theories of ocean turbulence caused by the Coriolis force, a phenomenon caused by Earth's rotation that deflects moving objects, such as water or air, to the right in the northern hemisphere and to the left in the southern hemisphere.

The data may provide valuable information about ocean eddies, a type of ocean "weather." These intermediate-sized (50 to 200 kilometers, or 30 to 120 miles across) ocean features generally last only a few months, yet play an important role in transporting ocean heat. Eddies help create ocean weather patterns and transport nutrients from deep to shallower waters, where they enhance the growth of marine life.

Beyond Jason and the tandem mission, scientists are developing ways to achieve even higher resolution ocean measurements without flying multiple conventional altimeters. A Jason follow-on project, the Ocean Surface Topography Mission, may carry a Wide-Swath Ocean Altimeter. It would make wide-swath ocean surface height measurements using radar interferometry. The wide-swath instrument would provide a resolution of about 15 kilometers (9 miles) on the ocean surface, an eight-fold improvement in data resolution over the tandem mission.

With Jason's instruments fully calibrated, NASA and the French Space Agency released via the Internet Jason's first high accuracy science data products. The products represent the final, validated records of Jason altimetry data and associated background information. Scientists around the world will use these records to develop products and perform investigations. The Jason science team has accumulated approximately 50 10-day cycles from the mission. These will be reprocessed over the next several months to create a single data record for each cycle. Future records will be made available to the public about 35 days after spacecraft collection. Specialized products are available to scientists.

Jason is continuing Topex/Poseidon's observations of ocean surface topography, monitoring world ocean circulation, studying interactions of the oceans and atmosphere, improving climate predictions and observing events like El Nino. Jason's onboard altimeter precisely maps the surface height of 95 percent of Earth's ice-free oceans every 10 days to an accuracy of 3.3 centimeters (about 1.33 inches). The spacecraft provides continuous data on wind speed and wave height.