NASA is looking into whether mixed reality technology could help with repairs and upgrades on the cutting-edge Cold Atom Lab aboard the space station.

NASA’s Cold Atom Lab – a quantum physics facility aboard the International Space Station – hosts multiple experiments that explore the fundamental nature of atoms by cooling them down to nearly absolute zero (the coldest temperature matter can reach). Earlier this year, NASA astronaut Megan McArthur tested the use of a mixed reality headset (a Microsoft HoloLens) to help keep the experiment at the cutting edge.

NASA’s Cold Atom Lab is a first-of-its-kind physics laboratory operating in Earth orbit. About the size of a mini-fridge, it hosts multiple experiments that explore the fundamental nature of atoms by cooling them down to nearly absolute zero (the coldest temperature matter can reach). The ultracold atoms provide a window into the quantum realm, where matter exhibits strange behaviors that underpin many modern technologies.

In 2020, during her extended stay aboard the space station, NASA astronaut Christina Koch worked with Earth-based mission team members to install upgraded hardware in Cold Atom Lab. Along with adding new capabilities to the novel facility, the effort proved something else: that such maintenance could be performed without the need to lug the laboratory back to Earth.

Plans are underway for a series of additional upgrades to Cold Atom Lab in the coming years, so the mission team is investigating ways to make these activities more efficient. Earlier this summer, they successfully tested a new tool that could help with that goal: a Microsoft HoloLens, a mixed reality (also known as augmented reality, or AR) headset. On July 15, astronaut Megan McArthur used the AR headset while she replaced a piece of hardware inside Cold Atom Lab, enabling the facility to produce ultracold potassium atoms in addition to the rubidium atoms that have been used since the facility started operating in 2018. 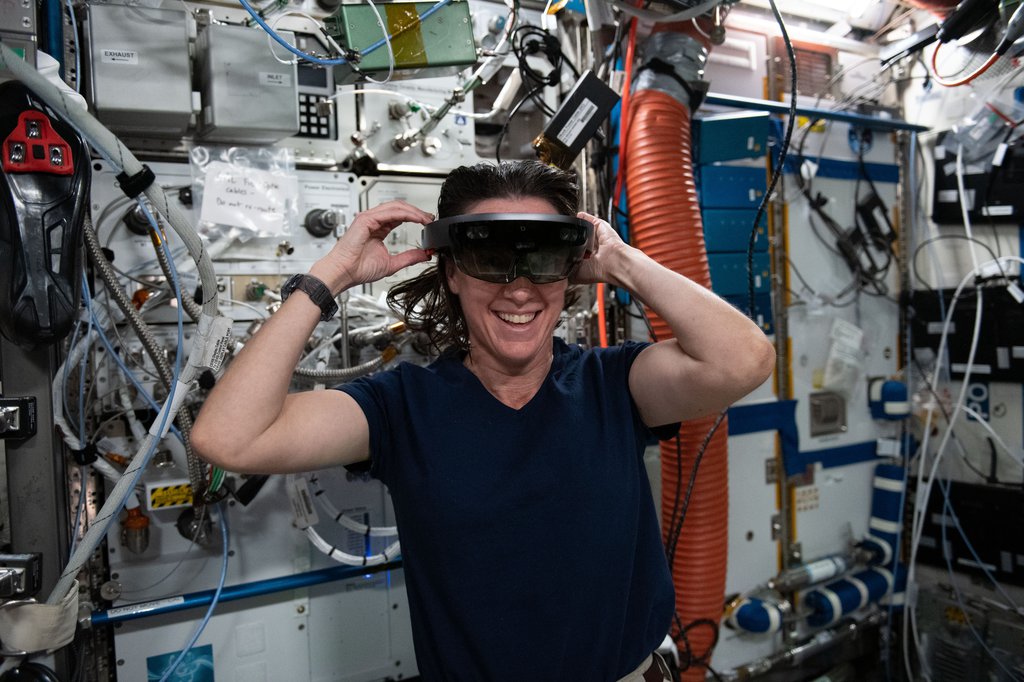 NASA Astronaut Megan McArthur dons a Microsoft HoloLens, a mixed reality (or augmented reality) headset, which allows her to see both the spacearound her as well as digital displays in her field of view.

Mixed reality headsets such as the HoloLens look like wraparound sunglasses, and unlike virtual reality headsets (which produce an entirely virtual setting), the HoloLens has transparent lenses that blend the virtual and real worlds together. This allowed McArthur to see the area around her, and a small forward-facing camera on the headset allowed members of the Cold Atom Lab team, watching on large screens in the Earth Orbiting Missions Operations Center at NASA’s Jet Propulsion Laboratory in Southern California, to see whatever she was looking at. By contrast, during the 2020 activity with Christina Koch, the team could see a live video feed only from a fixed camera positioned behind or above the astronaut, leaving their view of the hardware mostly obscured.

McArthur could also see virtual graphic annotations, such as text and arrows, placed in her field of view by the Cold Atom Lab operations team. For example, as she looked at a series of cables, the mission team could place an arrow in her field of vision, pointing to the specific cable she needed to unplug. Even if she were to move her head away and back again, the arrow would remain pointing at the same cable location.

Virtual reality headsets have been used for various applications aboard the space station, and mixed reality has been used in a few cases. But usually, the goal of these activities is to make it easier for an astronaut to perform a task alone. The Cold Atom Lab hardware replacement activity marked the first use of a mixed reality headset to improve the live interaction between an astronaut and engineers on Earth; it also marked the first use of mixed reality to repair a science experiment on the station. Preparation for the activity took six months, with collaboration between NASA’s JPL, Johnson Space Center in Houston, and Marshall Space Flight Center in Huntsville, Alabama.

“Cold Atom Lab is investing in the use of this technology on the space station not just because it’s intriguing, but because it could provide additional capabilities for these complex tasks that we rely on astronauts to perform,” said Kamal Oudrhiri, Cold Atom Lab’s project manager at JPL. “This activity was a perfect demonstration of how Cold Atom Lab and quantum science can take advantage of mixed reality technology.”

Quantum science has revealed many non-intuitive features of the physical world, such as the fact that atoms behave like both solid objects and waves. Some of these discoveries led to the development of technologies that many of us use everyday, such as transitors and microchips.

Cold Atom Lab is the first quantum science facility in Earth orbit. Cooling the atoms causes them to move more slowly, making them easier to study. And ultracold atoms can also form a fifth state of matter, called a Bose-Einstein condensate, which displays typically microscopic quantum features at a macroscopic scale.

In the microgravity environment, scientists can make atoms colder and study them for longer than on Earth. This opens up avenues of research that aren’t accessible on the ground. By making Cold Atom Lab upgradable, team members can add new tools and capabilities as their research progresses, so they can seek answers to new questions and conduct increasingly complex and impactful experiments.

The Cold Atom Lab has been operating on the International Space Station since 2018. Take a closer look at the space station using this interactive tool, or view the full interactive experience at Eyes on the Solar System Interactive.

“This repair activity allows potassium gases to also be studied in Cold Atom Lab, which will enable scientists to perform dozens of new experiments in quantum chemistry and fundamental physics using multi-species gases where the atoms interact with each other in interesting ways at the ultra-low temperatures only achievable in microgravity,” said Jason Williams, Cold Atom Lab’s project scientist. “Our goal is for Cold Atom Lab to become an evolving science facility so we can quickly build on our research and work with the astronauts to add new hardware capabilities without the need to build and launch new facilities each step of the way.”

A hardware upgrade on a facility like Cold Atom Lab would normally be done only by someone intimately familiar with the hardware, since a misstep during the process could impact Cold Atom Lab’s ability to operate. McArthur had to work around delicate, tightly packed interior components, including more than a dozen electronics cards, a maze of wires and cables, and an orchestra of finely tuned lasers used to cool atoms down to nearly absolute zero inside a sealed vacuum chamber while infrared cameras observe them.

Future upgrades to Cold Atom Lab will also involve real-time interactions between astronauts on the station and team members on the ground. That’s why this trial use of mixed reality was so inspiring to the team.

“A task like this needs a lot of real-time guidance with an expert on the ground, and that’s where the HoloLens could be very useful,” said Jim Kellogg, launch vehicle and space station integration lead for Cold Atom Lab at JPL, which manages the mission.

Designed and built at JPL, Cold Atom Lab is sponsored by the Biological and Physical Sciences Division under NASA’s Science Mission Directorate.

To learn more about the facility's upgrade in 2020, go here: