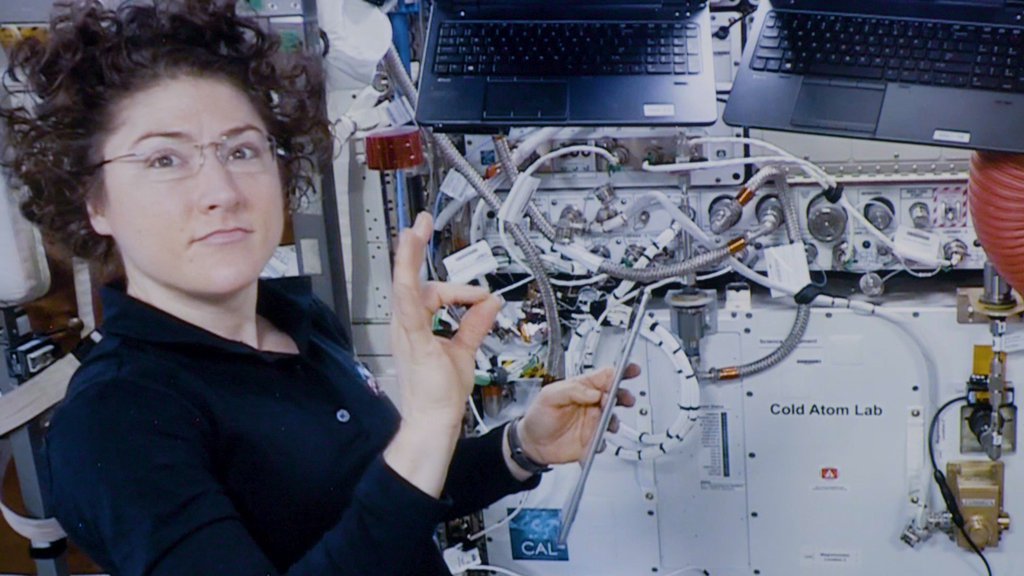 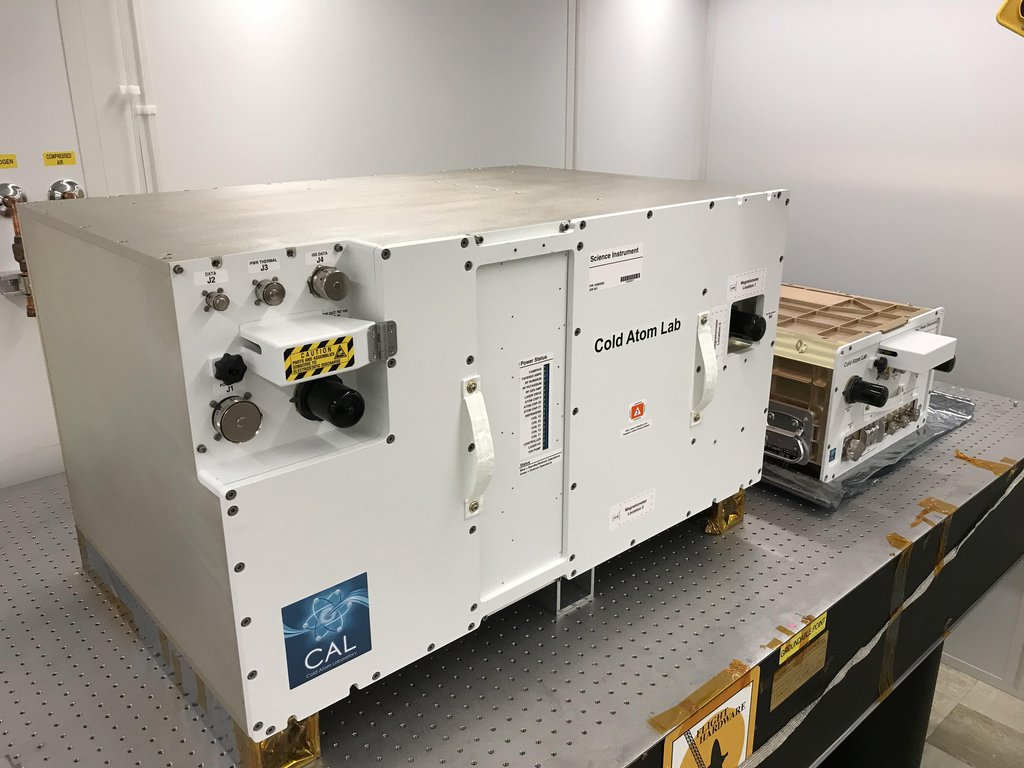 About the size of a mini fridge, the Cold Atom Lab Science Instrument (left) contains the Science Module, which cools atoms to nearly absolute zero. The smaller box on the right contains additional hardware. 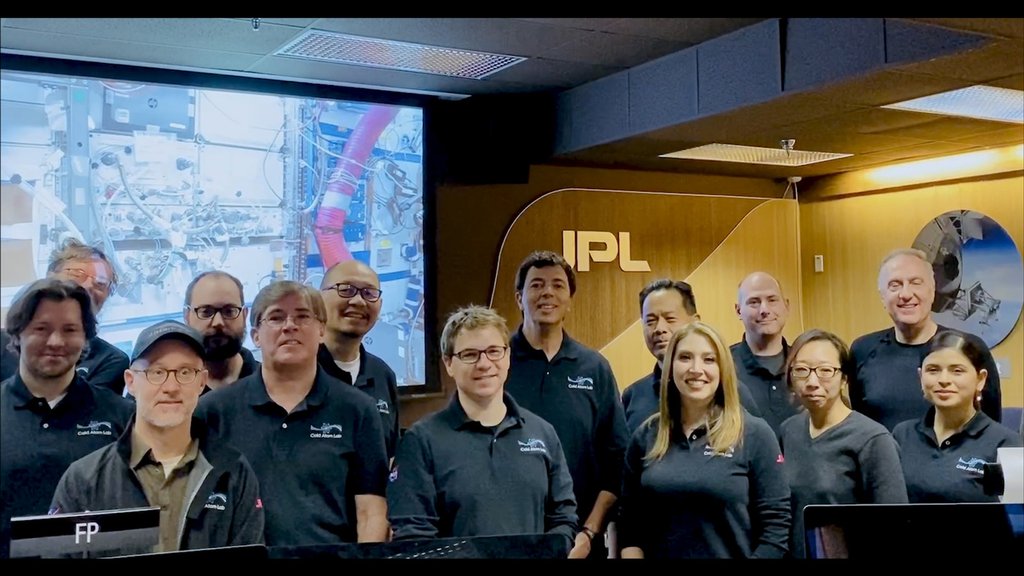 In January 2020, members of the Cold Atom Lab operations team assisted remotely in a hardware upgrade to Cold Atom Lab while the facility was still aboard the International Space Station.
Credit: NASA/JPL-Caltech

The Cold Atom Lab is using microgravity to learn about atoms and the quantum world, which could pave the way for new technologies in space and on the ground.

Installing the upgrade in space was something of an experiment as well. On Earth, that task would fall to engineers with years of experience handling the components. To avoid bringing the facility back down from the space station - a costly and time-consuming step - the mission team guided Koch and Meir through the installation via live video conference from NASA's Jet Propulsion Laboratory in Southern California.

"With this upgrade, we were effectively replacing the heart of Cold Atom Lab, and everything had to go perfectly," said Kamal Oudrhiri, project manager for Cold Atom Lab at JPL. "Astronauts are extremely smart, capable people, but we felt like heart surgeons trying to show a general practitioner how to do surgery for the first time. We did everything we could to ensure success, but truthfully I was very nervous."

In January 2020, members of the Cold Atom Lab operations team worked with astronauts Christina Koch and Jessica Meir on a hardware upgrade to Cold Atom Lab while the facility was still aboard the International Space Station.

Physicists use ultracold atom facilities on Earth for a variety of experiments that probe the fundamental behaviors of atoms. Chilling atoms to within one ten billionth of a degree above 0 Kelvin (minus 459.67 degrees Fahrenheit, or minus 273.15 degrees Celsius) causes them to slow down significantly, making them easier to study. At those temperatures, some atoms can also form a fifth state of matter, called a Bose-Einstein condensate that does not exist in nature. Bose-Einstein condensates provide a unique window into the strange world of quantum mechanics, which governs the universe at very small scales.

Cold Atom Lab is the first ultracold atom facility in Earth orbit. In the weightless environment of space, atoms aren't pulled down by gravity, so they exist in their unbound, ultracool state for long periods of time. This characteristic enables scientists to observe their natural behaviors in a way that is not possible on Earth.

Five science groups have been conducting experiments with Cold Atom Lab since it began operating in the summer of 2018, and they're eager to begin working with the upgraded hardware, including a new instrument called an atom interferometer. In space, atom interferometry could have multiple applications, including making exquisitely subtle measurements of gravity that are useful for fundamental physics research, planetary science and other fields.

For example, atom interferometry could be used to measure changes in gravity across a planet's surface to learn about its composition and subsurface features. The tool could also be used to test Albert Einstein's fundamental theory of gravity to an unprecedented degree. The Cold Atom Lab team recently confirmed that the atom interferometer is working as expected, making it the first instrument of its kind to operate in space.

"With Cold Atom Lab we're looking for new physics that pops up only when you can study the universe at extremely fine scales," said Jason Williams, the lead scientist for the Cold Atom Lab atom interferometer at JPL.

Cold Atom Lab consists of two metal boxes, the larger of which is called the Science Instrument and weighs over 400 pounds (180 kilograms). Inside is a compartment called the Science Module, which is where the atoms are cooled and the science takes place.

To complete the upgrade, Koch and Meir would have to gently maneuver the sizeable Science Instrument out of its operating location on the space station, remove the old Science Module and replace it with the new one.

Months before the installation, members of the Cold Atom Lab team worked with the Payload Operation and Integration Center at NASA's Marshal Space Flight Center in Huntsville, Alabama, to create instructions for Koch and Meir. They divided the installation into six sessions over eight days, including practice for Koch. Crew time on the station is extremely valuable, so the mission team spent weeks practicing the steps on Earth to optimize the procedure.

"There are so many details that it's difficult to even explain," said Jim Kellogg, launch vehicle and space station integration lead for Cold Atom Lab at JPL. "We had to consider details such as what tools will the crew need? If we need to borrow a tool from another group on the space station, how do we do that? Where is everything going to be temporarily stowed while the astronauts are working on our instrument? Every detail needs to be documented and signed off, and the people at Marshall Space Flight Center supported us through every step of the way."

To reinstall the Science Instrument, Koch, working alone, would have to inspect and connect 11 precision fiber optic cables. The glass fiber cores of the cables are about one-twentieth the diameter of a human hair, and if any were broken, contaminated or scratched, it could potentially result in mission-ending failures.

"She was absolutely fantastic," Kellogg said of Koch. "Every time I was about to remind her of something or give her a heads-up about what was coming, she would already be on top of it. She was so attentive to every detail in our procedures and to the guidance I was giving her. She was amazing in every way."

Koch was equally enthusiastic about the experience. "It took me over 300 days [since arriving on the space station] to get to work on Cold Atom Lab, but it was worth it," she said on the first day of the activity.

And how did the installation turn out? So far, it looks like a complete success.

"This was an extremely difficult endeavor that required a dedicated team on the ground and two committed astronauts, Christina and Jessica," said Oudrhiri. "If this installation hadn't gone well, there would have been no second chance. We'd have to bring the entire flight instrument back to Earth, and that could have set us back at least two years."

Once testing and analysis of the new hardware are complete in the coming weeks, the team expects the science groups that use the Cold Atom Lab to begin taking data again.

Building an ultracold atom facility that could withstand the trip to space, operate with little to no astronaut assistance, and even be upgraded in orbit took the Cold Atom Lab team years. Now they hope their work has kicked off an era in which quantum science is done regularly in orbit.

Designed and built at JPL, Cold Atom Lab is sponsored by the Space Life and Physical Sciences Research and Applications (SLPSRA) division of NASA's Human Exploration and Operations Mission Directorate at NASA Headquarters in Washington and the International Space Station Program at NASA's Johnson Space Center in Houston.