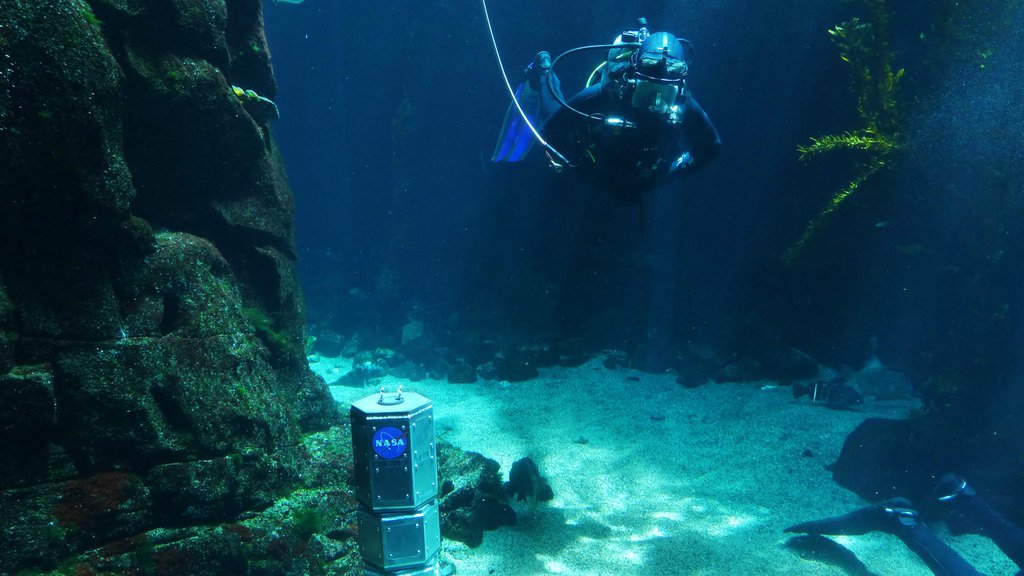 The body of the Buoyant Rover for Under-Ice Exploration, developed at NASA's Jet Propulsion Laboratory, was tested at the California Science Center, Los Angeles, from June 22 to 24, 2015. Andy Klesh, seen here, is the principal investigator.
Credit: NASA/JPL-Caltech 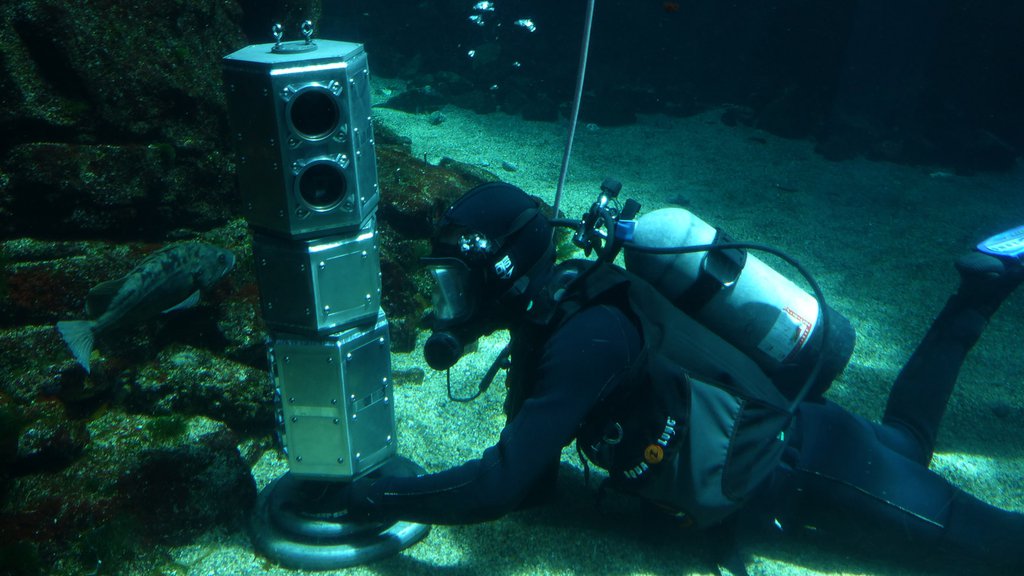 Researchers tested an under-ice rover's systems at the bottom of a large aquatic exhibit at the California Science Center. Principal investigator Andy Klesh is also a volunteer diver at the science center.
Credit: NASA/JPL-Caltech 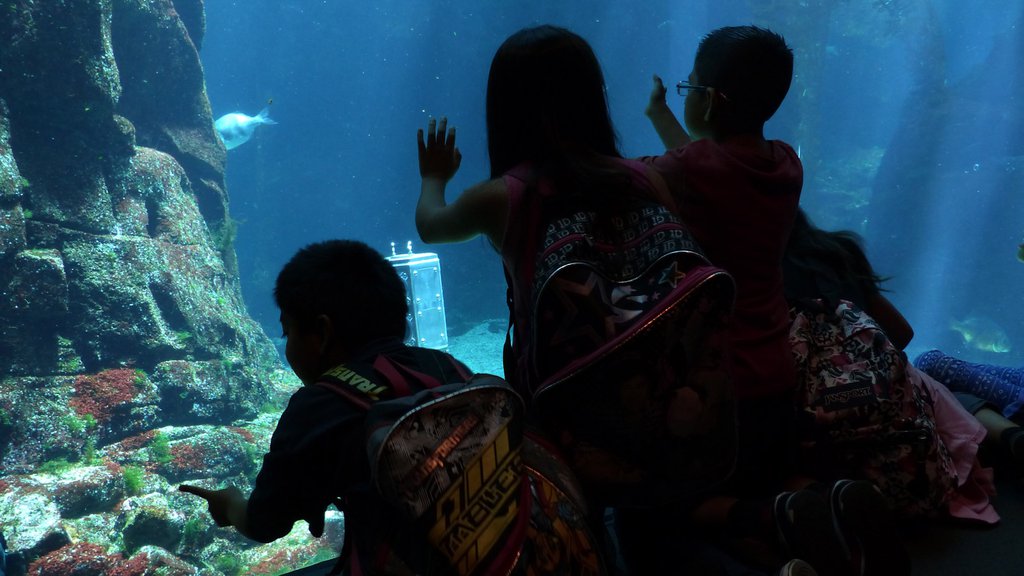 Visitors to the California Science Center saw the body of the Buoyant Rover for Under-Ice Exploration, surrounded by aquatic life from Southern California, on June 22, 2015.
Credit: NASA/JPL-Caltech 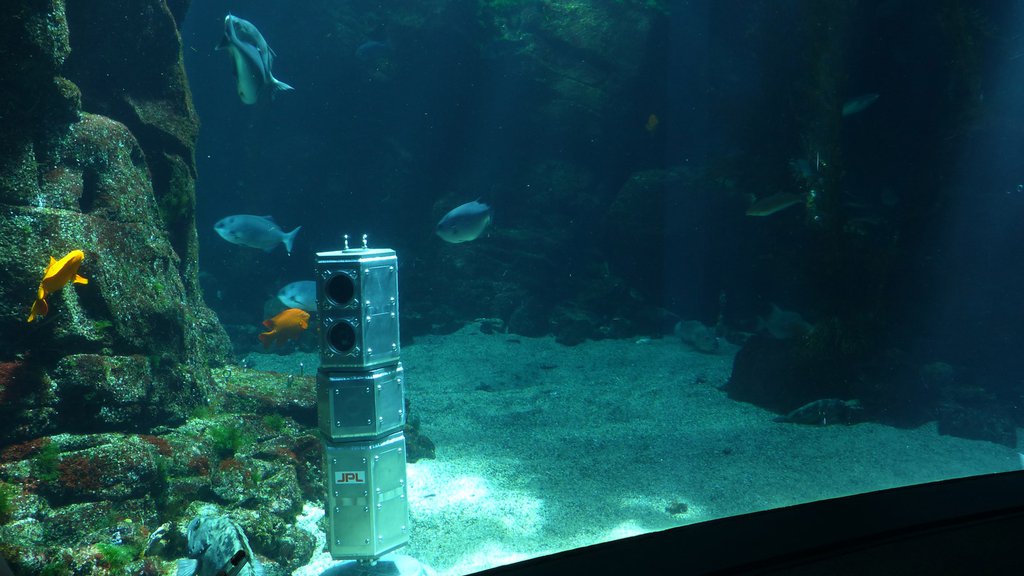 The body of an under-ice rover collected data, including images, while at the California Science Center from June 22 to 24, 2015. Eventually the researchers plan to take it to the Arctic or Antarctic region to test it under ice.
Credit: NASA/JPL-Caltech 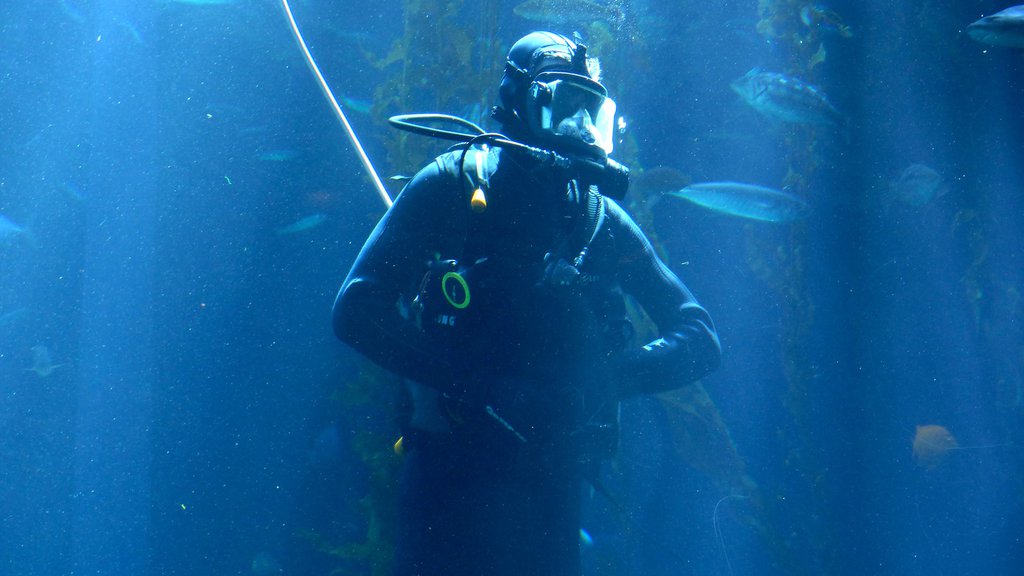 Andy Klesh, principal investigator for an under-ice rover at NASA's Jet Propulsion Laboratory, has been a volunteer diver at the California Science Center for two years.
Credit: NASA/JPL-Caltech 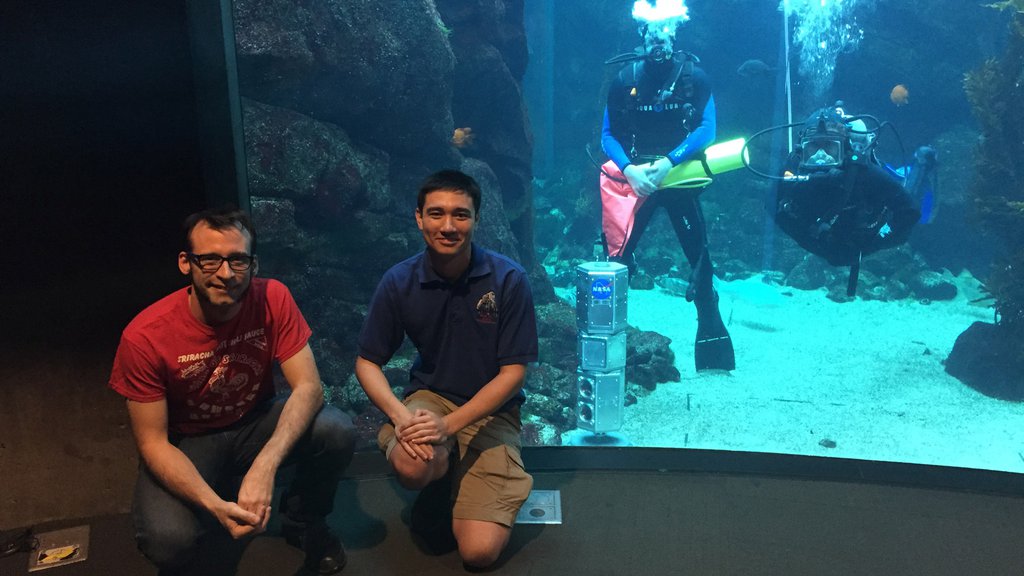 An under-ice rover prototype was tested at the California Science Center this week.

A school of sardines fluttered by as giant leafy kelp swayed back and forth at the California Science Center in Los Angeles on Monday, June 22. At the bottom of this 188,000-gallon aquatic tank, a bright orange garibaldi fish seemed to ignore a new visitor to the aquatic wonderland: the silver body of an under-ice rover.

The rover's presence 24 feet (7.3 meters) underwater at the science center this week helped researchers at NASA's Jet Propulsion Laboratory, Pasadena, California, test the innovative rover's systems. On Monday, the visitors' guide to the rover and the fish around it was Andy Klesh, principal investigator for the rover at JPL and volunteer diver at the science center.

As bubbles flowed from his face mask, Klesh explained that the buoyant rover can be used here on Earth to study the Arctic and Antarctic. Researchers also envision that a technology like this could one day explore icy bodies in the solar system, and even look for signs of habitability and life.

"A lot of what we do in deep space is applicable to the ocean," Klesh said. "This is an early prototype for vehicles that could one day go to Europa and other planetary bodies with a liquid ocean covered by ice. It's ideal for traveling under the ice shelf of an icy world."

Provisionally called the Buoyant Rover for Under-Ice Exploration (BRUIE), this rover would normally float and have wheels. Its wheels would roll along on the underside of ice, as if the ice were the ground. Operating underwater, the rover would take images and collect other data to help scientists understand the important interface between ice and water.

"Our work aims to build a bridge between exploring extreme environments in our own ocean and the exploration of distant, potentially habitable oceans elsewhere in the solar system," said Kevin Hand, co-investigator for the rover and planetary scientist at JPL. Dan Berisford, John Leichty and Josh Schoolcraft at JPL are also co-investigators on the project.

The first iteration of this rover was a two-wheeled vehicle that the team took to Barrow, Alaska, in 2012. After the team sawed a hole in the ice, they placed the rover underwater, totally untethered. Back at JPL, engineers drove the rover remotely.

"This was the first time an under-ice vehicle had been operated via satellite," Klesh said.

The new version is longer, has a thicker body and is designed for ocean depths up to about 700 feet (200 meters). The central body contains computers, sensors and communication equipment. On either side of the central section is a "pod," each with sensors, lights, a camera, batteries, instruments and two motors. The software for this rover is similar to what is being used for Mars Cube One, two communication-relay CubeSats that will launch with NASA's InSight Mars lander in 2016.

Researchers are currently working to increase the rover's autonomy and beef up its hazard avoidance, with an eye toward eventually letting the rover survey a frozen lake on its own.

At the science center, the rover gathered data about its surroundings, including taking pictures of nearby fish and the people on the other side of the glass. The rover did not have its wheels, but the sections of its body rotated once every hour, giving visitors a show as it twisted around.

"We're a long way off from exploring Europa's ocean, but the young children visiting the California Science Center and seeing our robot could be the ones building the vehicles that go there," Hand said.

The rover's stint at the science center from June 22 to June 24 was a rare instance in which it encountered warm-climate sea creatures. The rover's next destination will likely be near one of Earth's frigid poles.