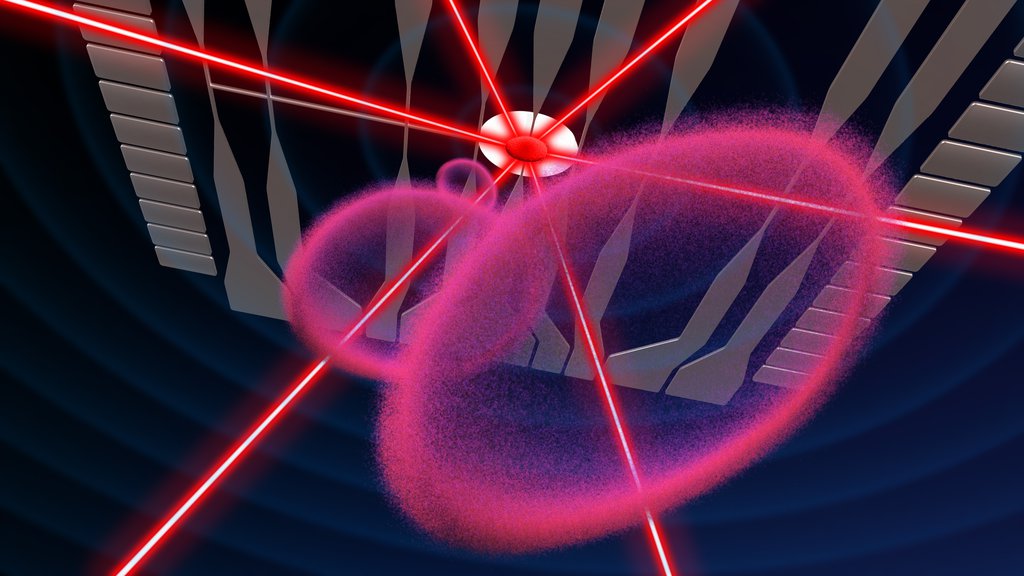 Inside NASA’s Cold Atom Lab, scientists form bubbles from ultracold gas, shown in pink in this illustration. Lasers, also depicted, are used to cool the atoms, while an atom chip, illustrated in gray, generates magnetic fields to manipulate their shape, in combination with radio waves.

Produced inside NASA’s Cold Atom Lab, the bubbles provide new opportunities to experiment with an exotic state of matter.

Since the days of NASA’s Apollo program, astronauts have documented (and contended with) how liquids behave differently in microgravity than they do on Earth – coalescing into floating spheres instead of bottom-heavy droplets. Now, researchers have demonstrated this effect with a much more exotic material: gas cooled to nearly absolute zero (minus 459 degrees Fahrenheit, or minus 273 degrees Celsius), the lowest temperature matter can reach.

Using NASA’s Cold Atom Lab, the first-ever quantum physics facility aboard the International Space Station, researchers took samples of atoms cooled to within a millionth of a degree above absolute zero and shaped them into extremely thin, hollow spheres. The cold gas starts out in a small, round blob, like an egg yolk, and is sculpted into something more like a thin eggshell. On Earth, similar attempts fall flat: The atoms pool downward, forming something closer in shape to a contact lens than a bubble.

The milestone – described in a new paper published online Wednesday, May 18, in the journal Nature – is only possible in the microgravity environment on the space station.

Ultracold clouds of atoms are manipulated into hollow spheres inside NASA’s Cold Atom Lab aboard the International Space Station. In this series of images, clouds are seen at different stages of inflation, capturing how a single cloud of atoms looks as it is manipulated into a bubble.

The ultracold bubbles could eventually be used in new kinds of experiments with an even more exotic material: a fifth state of matter (distinct from gases, liquids, solids, and plasmas) called a Bose-Einstein condensate (BEC). In a BEC, scientists can observe the quantum properties of atoms at a scale visible to the naked eye. For instance, atoms and particles sometimes behave like solid objects and sometimes behave like waves – a quantum property called “wave-particle duality.”

The work requires no astronaut assistance. The ultracold bubbles are made inside Cold Atom Lab’s tightly sealed vacuum chamber using magnetic fields to gently manipulate the gas into different shapes. And the lab itself – which is about the size of a minifridge – is operated remotely from JPL.

The largest bubbles are about 1 millimeter in diameter and 1 micron thick (that’s one-thousandth of a millimeter, or 0.00004 inches). They are so thin and dilute that only thousands of atoms compose them. By comparison, a cubic millimeter of air on Earth contains somewhere around a billion trillion molecules.

“These are not like your average soap bubbles,” said David Aveline, lead author on the new work and a member of the Cold Atom Lab science team at NASA’s Jet Propulsion Laboratory in Southern California. “Nothing that we know of in nature gets as cold as the atomic gases produced in Cold Atom Lab. So we start with this very unique gas and study how it behaves when shaped into fundamentally different geometries. And, historically, when a material is manipulated in this way, very interesting physics can emerge, as well as new applications.”

Exposing materials to different physical conditions is central to understanding them. It’s also often the first step to finding practical applications for those materials.

Conducting these types of experiments on the space station using the Cold Atom Lab enables scientists to remove the effects of gravity, which is often the dominant force impacting the motion and behavior of fluids. By doing so, scientists can better understand the other factors at play, such as a liquid’s surface tension or viscosity.

Now that scientists have created the ultracold bubbles, their next step will be to transition the ultracold gas composing the bubbles to the BEC state and see how it behaves.

“Some theoretical work suggests that if we work with one of these bubbles that is in the BEC state, we might be able to form vortices – basically, little whirlpools – in the quantum material,” said Nathan Lundblad, a professor of physics at Bates College in Lewiston, Maine, and the principal investigator of the new study. “That’s one example of a physical configuration that could help us understand BEC properties better and gain more insight into the nature of quantum matter.”

The field of quantum science has led to the development of modern technologies such as transistors and lasers. Quantum investigations done in Earth orbit could lead to improvements in spacecraft navigation systems and sensors for studying Earth and other solar system bodies. Ultracold atom facilities have been in operation on Earth for decades; however, in space, researchers can study ultracold atoms and BECs in new ways because the effects of gravity are reduced. This enables researchers to regularly reach colder temperatures and observe phenomena longer than they can on Earth.

“Our primary goal with Cold Atom Lab is fundamental research – we want to use the unique space environment of the space station to explore the quantum nature of matter,” said Jason Williams, project scientist for Cold Atom Lab at JPL. “Studying ultracold atoms in new geometries is a perfect example of that.”

Designed and built at JPL, Cold Atom Lab is sponsored by the Biological and Physical Sciences (BPS) Division of NASA’s Science Mission Directorate at the agency’s headquarters in Washington. BPS pioneers scientific discovery and enables exploration by using space environments to conduct investigations not possible on Earth. Studying biological and physical phenomena under extreme conditions allows researchers to advance the fundamental scientific knowledge required to go farther and stay longer in space, while also benefitting life on Earth.