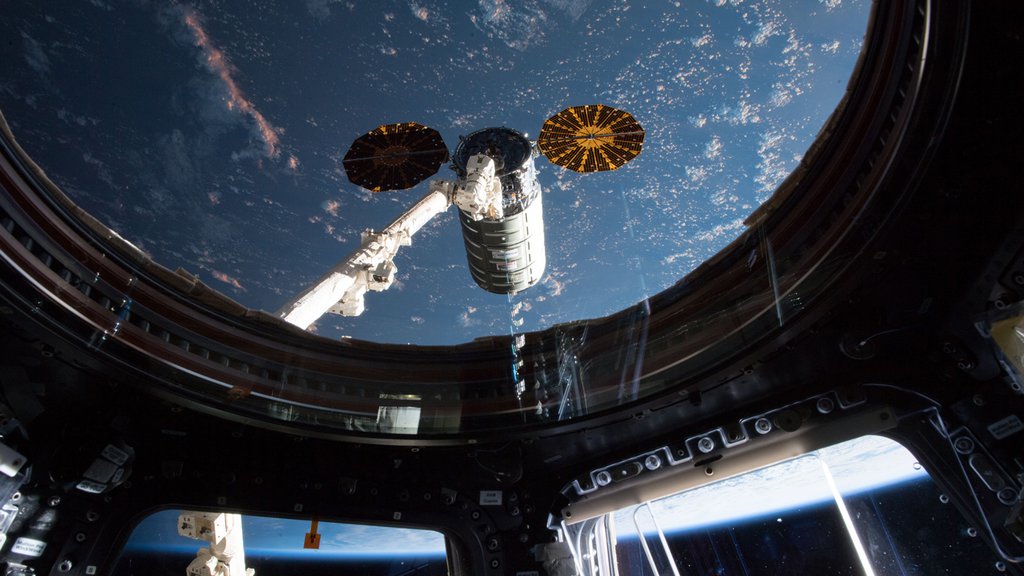 The International Space Station, shown here in 2018, is home to many scientific experiments, including NASA's Cold Atom Laboratory.
Credit: NASA 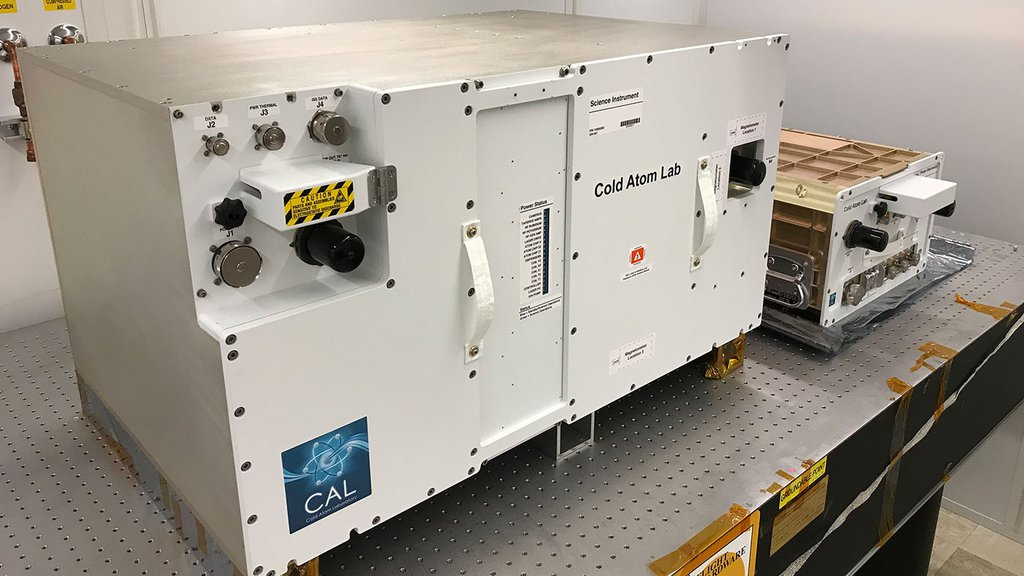 The Cold Atom Laboratory (CAL) consists of two standardized containers that will be installed on the International Space Station. The larger container holds CAL's physics package, or the compartment where CAL will produce clouds of ultracold atoms.› Full image and caption
Credit: NASA/JPL-Caltech 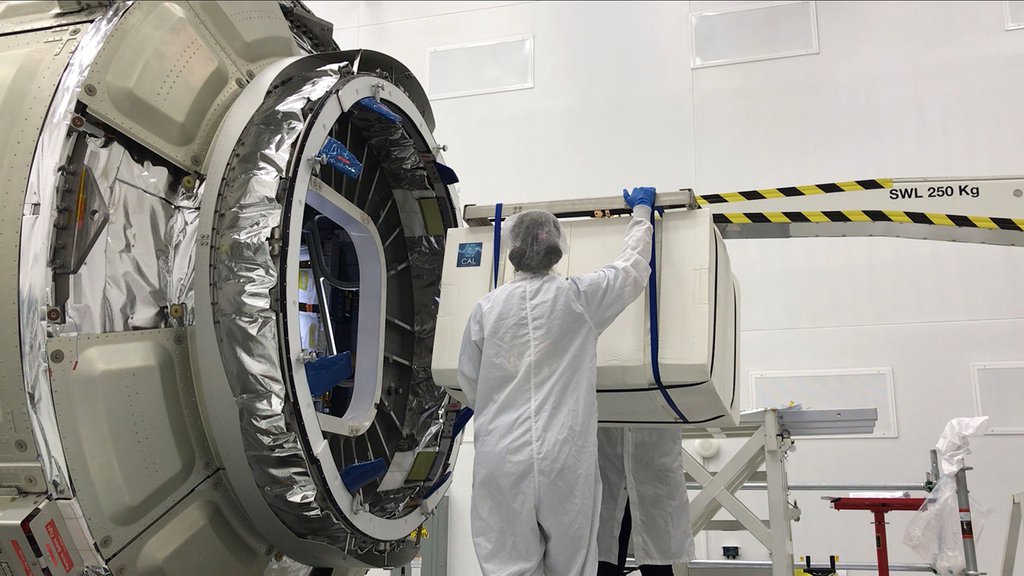 The Cold Atom Laboratory (CAL), packaged in a protective layer, is loaded onto a Northrop Grumman (formerly Orbital ATK) Cygnus spacecraft for its trip to the International Space Station. The facility launched in May 2018 from NASA's Wallops Flight Facility in Virginia.› Full image and caption
Credit: NASA/Northrop Grumman 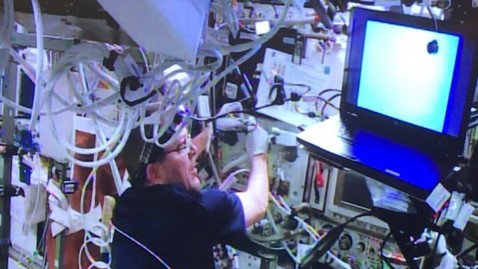 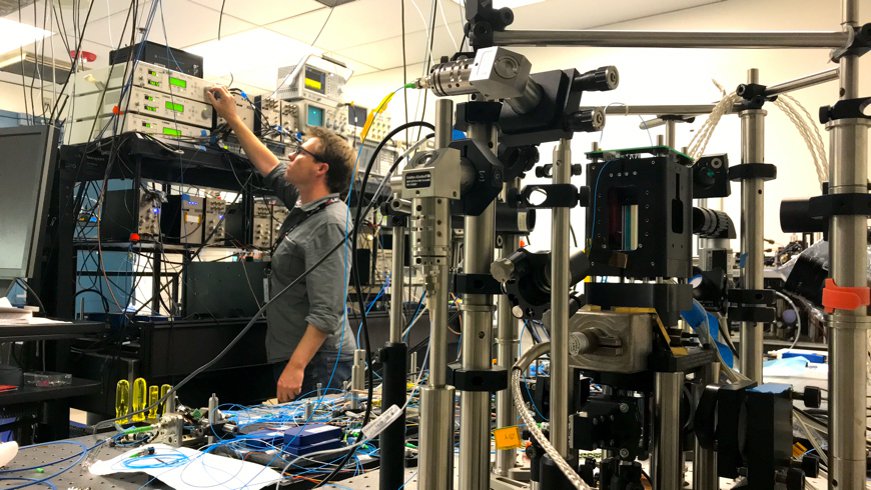 Cold Atom Laboratory (CAL) physicist David Aveline works in the CAL test bed, which is a replica of the CAL facility that stays on Earth. Scientists use the test bed to run tests and understand what is happening inside CAL while it is operating on the International Space Station.› Full image and caption
Credit: NASA/JPL-Caltech 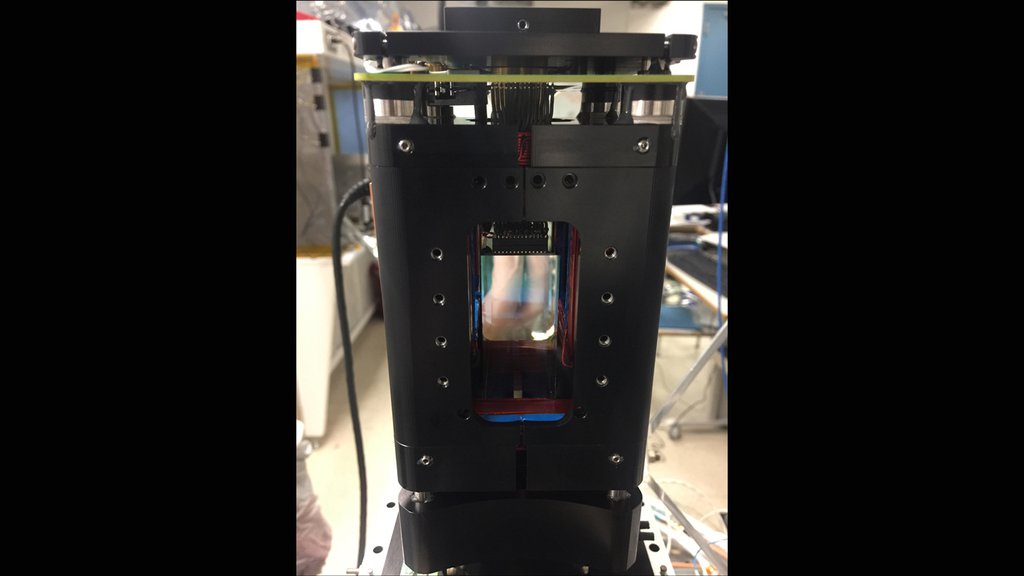 Inside NASA's Cold Atom Lab on the International Space Station, scientists are creating something colder than a winter's night in Antarctica - or even the dark side of the Moon.

What's the coldest place you can think of? Temperatures on a winter day in Antarctica dip as low as -120ºF (-85ºC). On the dark side of the Moon, they hit -280ºF (-173ºC). But inside NASA's Cold Atom Laboratory on the International Space Station, scientists are creating something even colder.

The Cold Atom Lab (CAL) is the first facility in orbit to produce clouds of "ultracold" atoms, which can reach a fraction of a degree above absolute zero: -459ºF (-273ºC), the absolute coldest temperature that matter can reach. Nothing in nature is known to hit the temperatures achieved in laboratories like CAL, which means the orbiting facility is regularly the coldest known spot in the universe.

Seven months after its May 21, 2018, launch to the space station from NASA's Wallops Flight Facility in Virginia, CAL is producing ultracold atoms daily. Five teams of scientists will carry out experiments on CAL during its first year, and three experiments are already underway.

Why cool atoms to such an extreme low? Room-temperature atoms typically zip around like hyperactive hummingbirds, but ultracold atoms move much slower than even a snail. Specifics vary, but ultracold atoms can be more than 200,000 times slower than room-temperature atoms. This opens up new ways to study atoms as well as new ways to use them for investigations of other physical phenomena. CAL's primary science objective is to conduct fundamental physics research - to try to understand the workings of nature at the most fundamental levels.

"With CAL we're starting to get a really thorough understanding of how the atoms behave in microgravity, how to manipulate them, how the system is different than the ones we use on Earth," said Rob Thompson, a cold atom physicist at NASA's Jet Propulsion Laboratory in Pasadena, California, and the mission scientist for CAL. "This is all knowledge that is going to build a foundation for what I hope is a long future of cold atom science in space."

Laboratories on Earth can produce ultracold atoms, but on the ground, gravity pulls on the chilled atom clouds and they fall quickly, giving scientists only fractions of a second to observe them. Magnetic fields can be used to "trap" the atoms and hold them still, but that restricts their natural movement. In microgravity, the cold atom clouds float for much longer, giving scientists an extended view of their behavior.

The process to create the cold atom clouds starts with lasers that begin to lower the temperature by slowing the atoms down. Radio waves cut away the warmest members of the group, further lowering the average temperature. Finally, the atoms are released from a magnetic trap and allowed to expand. This causes a drop in pressure that, in turn, naturally causes another drop in the cloud's temperature (the same phenomenon that causes a can of compressed air to feel cold after use). In space, the cloud has longer to expand and thus reach even lower temperatures than what can be achieved on Earth - down to about one ten billionth of a degree above absolute zero, perhaps even lower.

Ultracold atom facilities on Earth typically occupy an entire room, and in most, the hardware is left exposed so that scientists can adjust the apparatus if need be. Building a cold atom laboratory for space posed several design challenges, some of which change the fundamental nature of these facilities. First, there was the matter of size: CAL flew to the station in two pieces - a metal box a little larger than a minifridge and a second one about the size of a carry-on suitcase. Second, CAL was designed to be operated remotely from Earth, so it was built as a fully enclosed facility.

CAL also features a number of technologies that have never been flown in space before, such as specialized vacuum cells that contain the atoms, which have to be sealed so tightly that almost no stray atoms can leak in. The lab needed to be able to withstand the shaking of launch and extreme forces experienced during the flight to the space station. It took the teams several years to develop unique hardware that could meet the precise needs for cooling atoms in space.

"Several parts of the system required redesigning, and some parts broke in ways we'd never seen before," said Robert Shotwell, chief engineer for JPL's Astronomy, Physics and Space Technology Directorate and CAL project manager. "The facility had to be completely torn apart and reassembled three times."

All the hard work and problem solving since the mission's inception in 2012 turned the CAL team's vision into reality this past May. CAL team members talked via live video with astronauts Ricky Arnold and Drew Feustel aboard the International Space Station for the installation of the Cold Atom Laboratory, the second ultracold atom facility ever operated in space, the first to reach Earth orbit and the first to remain in space for more than a few minutes. Along the way, CAL has also met the minimum requirements NASA set to deem the mission a success and is providing a unique tool for probing nature's mysteries.

Designed and built at JPL, CAL is sponsored by the International Space Station Program at NASA's Johnson Space Center in Houston, and the Space Life and Physical Sciences Research and Applications (SLPSRA) Division of NASA's Human Exploration and Operations Mission Directorate at NASA Headquarters in Washington.