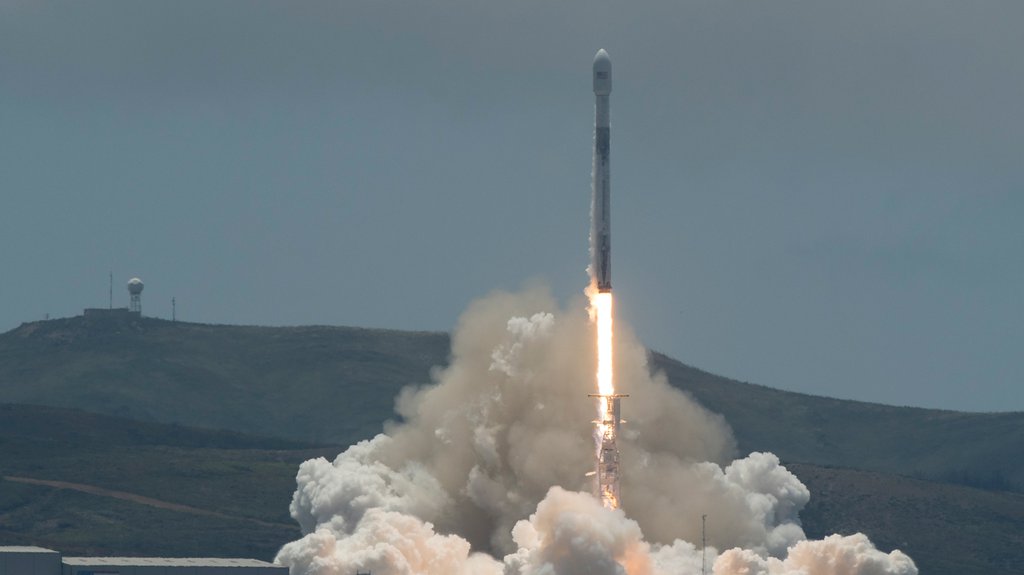 The NASA/German Research Centre for Geosciences GRACE Follow-On spacecraft launch onboard a SpaceX Falcon 9 rocket, Tuesday, May 22, 2018, from Space Launch Complex 4E at Vandenberg Air Force Base in California. The mission will measure changes in how mass is redistributed within and among Earth's atmosphere, oceans, land and ice sheets, as well as within Earth itself. GRACE-FO is sharing its ride to orbit with five Iridium NEXT communications satellites as part of a commercial rideshare agreement. Credits: NASA/Bill Ingalls

GRACE Follow-On has launched, and both satellites are communicating with ground stations.

A joint U.S./German space mission to track the continuous movement of water and other changes in Earth's mass on and beneath the planet's surface successfully launched at 12:47 p.m. PDT (3:47 p.m. EDT) Tuesday from the California coast.

The twin spacecraft of the Gravity Recovery and Climate Experiment Follow-On (GRACE-FO), a joint NASA/German Research Centre for Geosciences (GFZ) mission, lifted off on a SpaceX Falcon 9 rocket from Space Launch Complex 4E at Vandenberg Air Force Base in California, sharing their ride into space with five Iridium NEXT communications satellites.

Ground stations have acquired signals from both GRACE-FO spacecraft. Initial telemetry shows the satellites are performing as expected. The GRACE-FO satellites are at an altitude of about 305 miles (490 kilometers), traveling about 16,800 mph (7.5 kilometers per second). They are in a near-polar orbit, circling Earth once every 90 minutes.

3-2-1 liftoff of Falcon 9 with GRACE-FO! NASA's Gravity Recovery and Climate Experiment Follow-on, or GRACE-FO, launched from Vandenberg Air Force Base on California's Central Coast on May 22, 2018. The twin orbiters shared a ride to space with five Iridium NEXT communications satellites. GRACE-FO will continue a study begun by the original GRACE mission, which proved that water movement can be tracked with high precision by its effect on Earth's gravitational field. GRACE-FO will continue the record of regional variations in gravity, telling us about changes in glaciers, ground water, sea levels and the health of our planet as a whole.

"GRACE-FO will provide unique insights into how our complex planet operates," said Thomas Zurbuchen, associate administrator of NASA's Science Mission Directorate at NASA Headquarters in Washington. "Just as important, because the mission monitors many key aspects of the Earth's water cycle, GRACE-FO data will be used throughout the world to improve people's lives -- from better predictions of drought impacts to higher-quality information on use and management of water from underground aquifers."

Over its five-year mission, GRACE-FO will monitor the movement of mass around our planet by measuring where and how the moving mass changes Earth's gravitational pull. The gravity changes cause the distance between the two satellites to vary slightly. Although the two satellites orbit 137 miles (220 kilometers) apart, advanced instruments continuously measure their separation to within the width of a human red blood cell.

GRACE-FO continues the U.S./German partnership of the original GRACE mission, which operated from 2002 through 2017. "This mission continues and advances an amazing achievement of science and technology pioneered by the United States and Germany," said Zurbuchen.

For 15 years, GRACE's monthly maps of regional gravity variations provided new insights into how the Earth system functions and responds to change.

Among its innovations, GRACE was the first mission to measure the amount of ice being lost from the Greenland and Antarctic ice sheets. The mission improved our understanding of the processes responsible for sea level rise and ocean circulation, provided insights into where global groundwater resources are shrinking or growing, showed where dry soils are contributing to drought, and monitored changes in the solid Earth, such as from earthquakes.

"Extending the data record from GRACE will allow us to better distinguish short-term variability from longer-term trends," he said.

The GRACE-FO satellites will spend their first few days in space moving to the separation distance needed to perform their mission. When they reach this distance, the mission will begin an 85-day, in-orbit checkout phase. Mission managers will evaluate the instruments and satellite systems and perform calibration and alignment procedures. Then the satellites will begin gathering and processing science data. The first science data are expected to be released in about seven months.

For more information about GRACE-FO, visit: