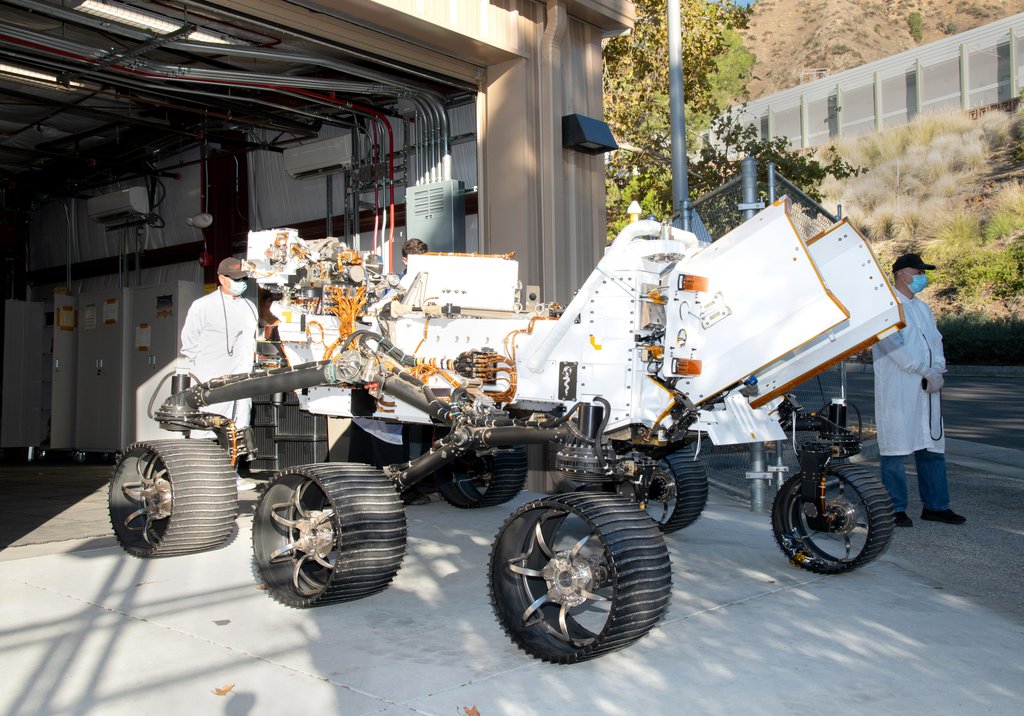 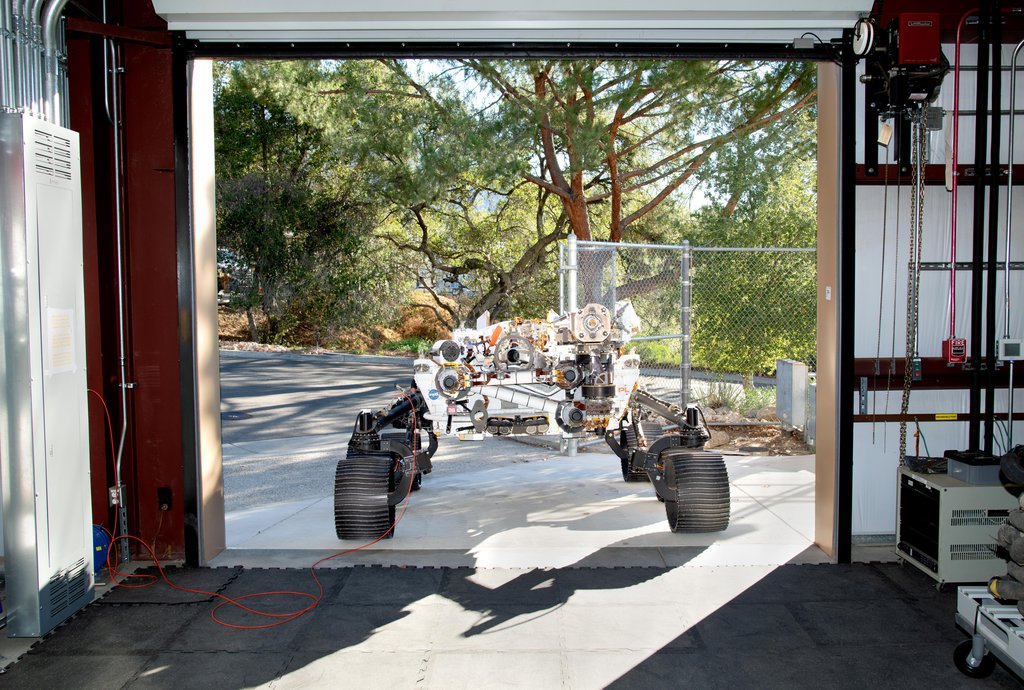 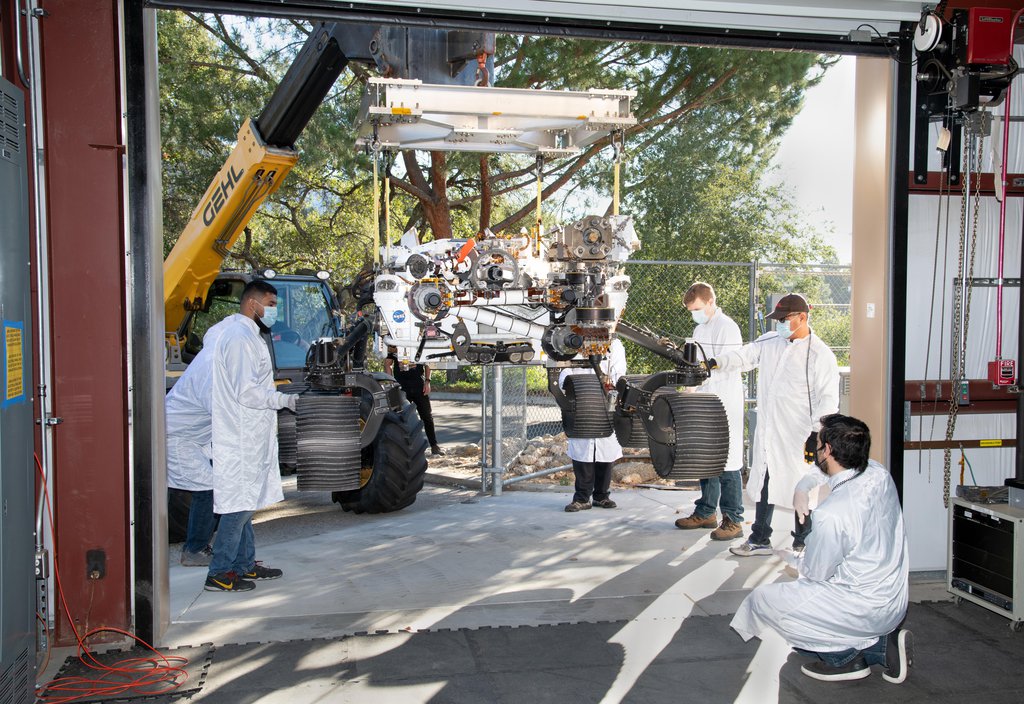 OPTIMISM, the full-scale engineering model of Perseverance, begins a series of rigorous tests to assess the risk of potential driving hazards on the surface of the Red Planet.

On a recent day in November, the car-size rover rolled slowly forward, then stopped, perched on the threshold of a Martian landscape. But this rover, named OPTIMISM, wasn’t on the Red Planet. And the landscape was a boulder-strewn mock-up of the real Mars – the Mars Yard at NASA’s Jet Propulsion Laboratory in Southern California.

OPTIMISM, a twin of the Perseverance rover that is exploring Jezero Crater on Mars, will perform a crucial job in the weeks ahead: navigating the Mars Yard’s slopes and hazards, drilling sample cores from boulders, and storing the samples in metal tubes – just like Perseverance is doing in its hunt for signs of ancient microbial life. Short for Operational Perseverance Twin for Integration of Mechanisms and Instruments Sent to Mars, OPTIMISM is more generically known as a vehicle system test bed, and the recently upgraded rover begins testing out new equipment for the first time this month.

The tests help ensure that OPTIMISM’s twin on Mars can safely execute the commands sent by controllers on Earth. They also could potentially reveal unexpected problems Perseverance might encounter.

“The size and shape of rocks in the visual field – will they turn into obstacles or not?” said Bryan Martin, the flight software and test beds manager at JPL. “We test a lot of that, figure out what kinds of things to avoid. What we have safely traversed around here has informed rover drivers in planning their traverses on Mars. We’ve done so much testing on the ground we can be confident in it. It works.”

About as long as a doubles tennis court and twice as wide, the Mars Yard has served as a testing ground for many a fully-engineered rover twin – from the engineering model of the very first, tiny Sojourner that landed on Mars in 1997 to the Spirit and Opportunity missions that began in 2004 to the Curiosity and Perseverance rovers exploring Mars today.

In each case, a rover double has scaled slopes, dodged obstacles, or helped rover planners puzzle out new paths on the simulated patch of Mars. OPTIMISM first rolled out into the Mars Yard in September 2020, when it conducted mobility tests.

But it recently received some key updates to match features available on Perseverance, including additional mobility software and the bulk of the exquisitely complex sample caching system. And while the team has already performed tests using the coring drill at the end of OPTIMISM’s robotic arm, they’ll be testing the newly installed Adaptive Caching Assembly for the first time in the Mars Yard. The assembly on Perseverance is responsible for storing rock and sediment samples. Some or all of these initial samples could be among those returned to Earth by a future mission.

“Now we can do it end-to-end in the test bed,” said the Vehicle System Ted Bed systems engineering lead, Jose G. Trujillo-Rojas. “Drill into the rock, collect the core sample, and now we have the mechanism responsible to cache that sample in the cylinder.”

And if problems arise on Perseverance on Mars, OPTIMISM can be used as a platform to figure out what went wrong and also how to fix it.

On this November day, a heavy-duty vehicle transported OPTIMISM from a JPL test lab to the Mars Yard garage. Recently expanded, the structure also provides shelter to one of Curiosity’s Earthly counterparts: MAGGIE, or Mars Automated Giant Gizmo for Integrated Engineering. A second Curiosity double, a skeletal version called “Scarecrow” that lacks a computer brain, is housed in a separate shed in the Mars Yard.

MAGGIE would be joining OPTIMISM in the Mars Yard garage in the days ahead. 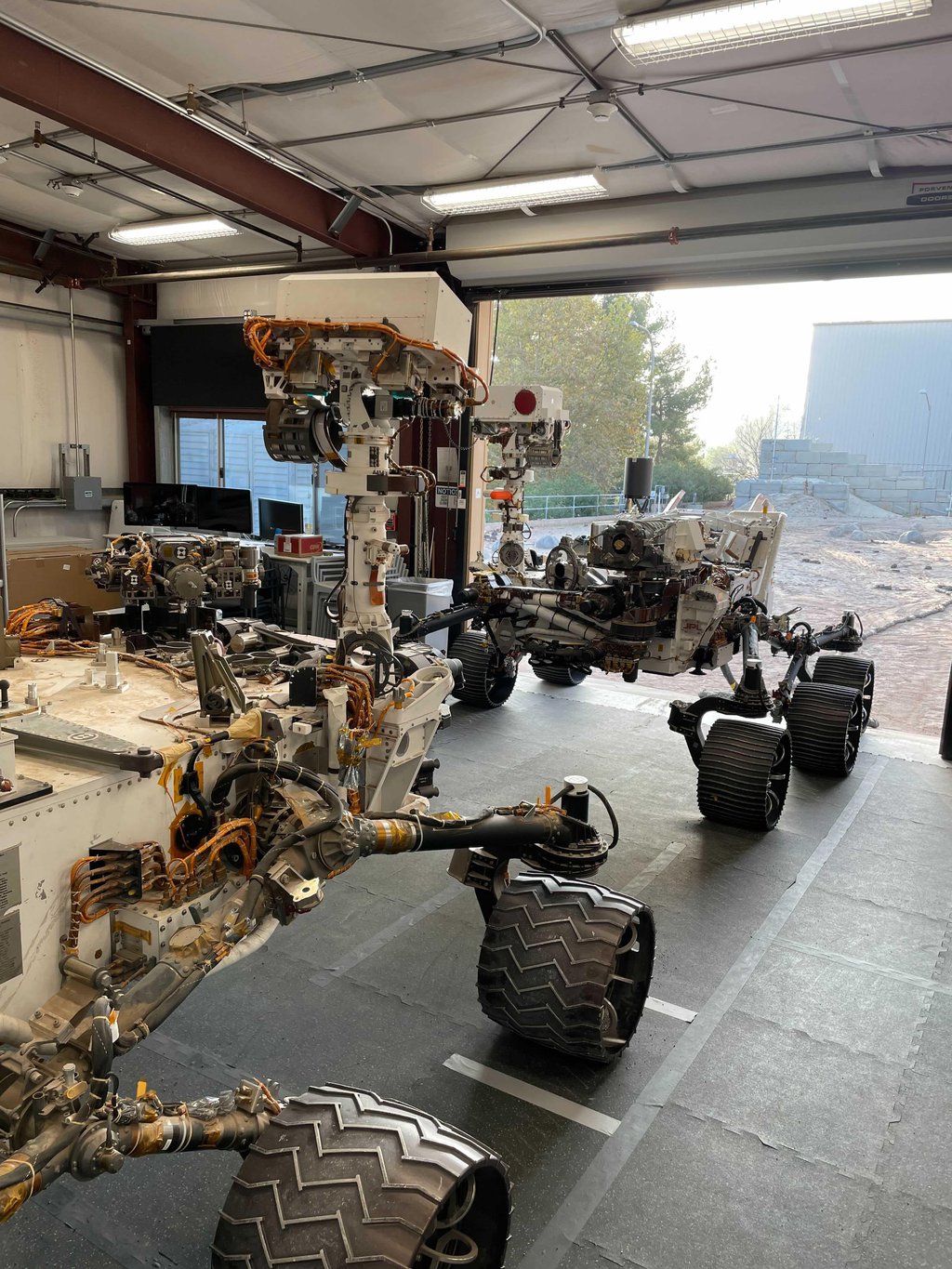 But, for now, the test-bed crew was focused on OPTIMISM. “Straight 5 meters forward: Ready?” Leann Bowen, a test bed engineer, called out from a computer console inside the garage.

With a whine of electric motors, OPTIMISM crept forward on its six metal wheels, stopping right on the mark on the garage’s concrete floor as members of the test-bed team looked on in their white lab coats. Through a wide-open door ahead of the rover, the Mars Yard beckoned.

Drilling core samples from terrestrial rocks in the Mars Yard and sealing them in metal tubes is not as straightforward as it might sound. JPL’s Mars team provides a variety of rock types for OPTIMISM to drill through, since the exact nature of the rock Perseverance will encounter often can’t be known in advance. Terrain is a variable, too: One previous test with the robotic arm involved parking the rover on a slope, then instructing it to drill.

“There was a possibility that the rover might slip,” Trujillo-Rojas said. “We wanted to test that first here on Earth before sending instructions to the rover on Mars. That was scary, because you can imagine if you drill this way, and the rover slightly slipped back, the drill could have gotten stuck.”

OPTIMISM drilled the core successfully, suggesting Perseverance also could pull off drilling on a slope if required.

With longer drives in Perseverance’s near future, another job for the Earth-bound twin will involve presenting new challenges to the rover’s autonomous navigation system, or AutoNav. Perseverance uses a powerful computer to make 3D maps using rover images of the terrain ahead, and uses those maps to plan its drive with minimal human assistance.

In Mars Yard tests, the twin rover might pause as it “thinks through” several possible choices – or even decides, unexpectedly, to avoid obstacles altogether and just go around.

“Seeing the rover autonomously move in the Mars Yard, you kind of get that sense of being connected to the rover on Mars,” he said. “It gives you that visual connection.”

Of course, OPTIMISM and its human team must contend with environmental factors very different from those encountered by Perseverance, which is built for freezing temperatures and intense radiation. Earth’s stronger gravity required OPTIMISM’s metal wheels to be thicker than its Martian counterpart’s. And its electronics sometimes must be cooled to avoid damage from Southern California’s summer temperatures – the opposite of the problem caused by deep cold on Mars.

“On Mars, we try to keep the rover warm,” Trujillo-Rojas said. “Here, we’re trying to keep it cool.”

Deer, bobcats, tarantulas, even occasional snakes, find their way into the Mars Yard. Wildfire in the region can fill the air with smoke. And testing and staffing schedules had to contend with COVID-19.

“We’ve been through a lot of challenges with this rover,” he said. “As soon as we were going to start building it, with hands-on integration, the pandemic happened. And then we had rains, and we got a lot of fire. We had to leave the lab – smoky!”

Now, a revamped OPTIMISM is ready to get back to work.

“It’s a big milestone for our team,” Trujillo-Rojas said.