The agency’s newest rover is trekking across the Martian landscape using a newly enhanced auto-navigation system.

NASA’s newest six-wheeled robot on Mars, the Perseverance rover, is beginning an epic journey across a crater floor seeking signs of ancient life. That means the rover team is deeply engaged with planning navigation routes, drafting instructions to be beamed up, even donning special 3D glasses to help map their course.

But increasingly, the rover will take charge of the drive by itself, using a powerful auto-navigation system. Called AutoNav, this enhanced system makes 3D maps of the terrain ahead, identifies hazards, and plans a route around any obstacles without additional direction from controllers back on Earth. 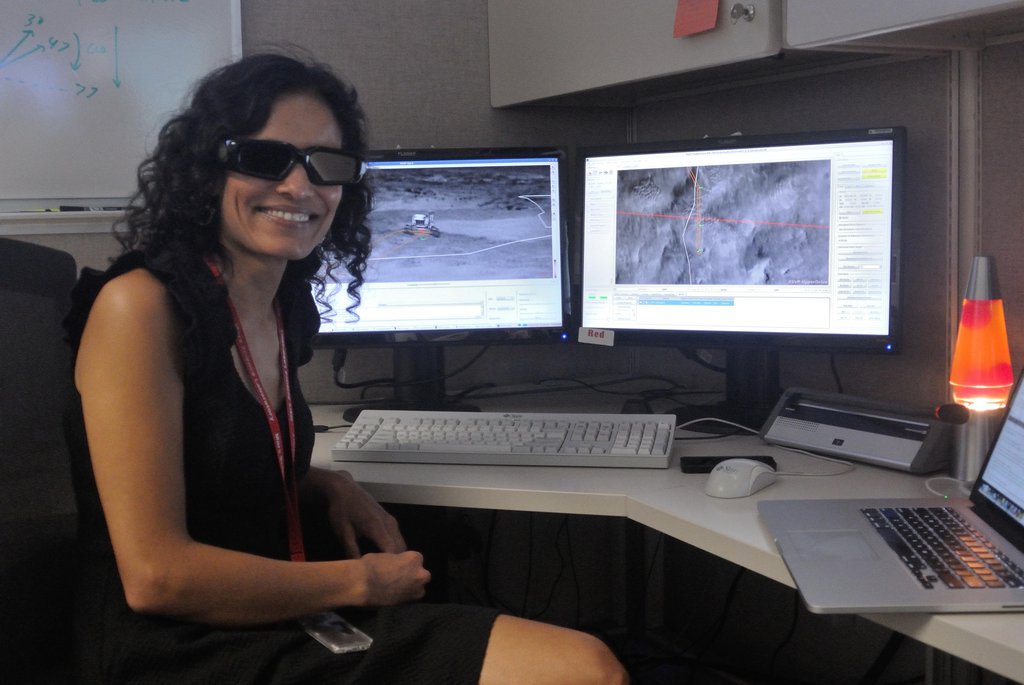 “We have a capability called ‘thinking while driving,’” said Vandi Verma, a senior engineer, rover planner, and driver at NASA’s Jet Propulsion Laboratory in Southern California. “The rover is thinking about the autonomous drive while its wheels are turning.”

That capability, combined with other improvements, might enable Perseverance to hit a top speed of 393 feet (120 meters) per hour; its predecessor, Curiosity, equipped with an earlier version of AutoNav, covers about 66 feet (20 meters) per hour as it climbs Mount Sharp to the southeast.

“We sped up AutoNav by four or five times,” said Michael McHenry, the mobility domain lead and part of JPL’s team of rover planners. “We’re driving a lot farther in a lot less time than Curiosity demonstrated.”

As Perseverance begins its first science campaign on the floor of Jezero Crater, AutoNav will be a key feature in helping get the job done.

This crater once was a lake, when, billions of years ago, Mars was wetter than today, and Perseverance’s destination is a dried-out river delta at the crater’s edge. If life ever took hold on early Mars, signs of it might be found there. The rover will gather samples over some 9 miles (15 kilometers), then prep the samples for collection by a future mission that would take them back to Earth for analysis.

“We’re going to be able to get to places the scientists want to go much more quickly,” said Jennifer Trosper, who has worked on every one of NASA’s Martian rovers and is the Mars 2020 Perseverance rover project manager. “Now we are able to drive through these more complex terrains instead of going around them: It’s not something we’ve been able to do before.”

This computer simulation shows NASA’s Perseverance Mars rover as it carried out its first drive using its auto-navigation feature, which allows it to avoid rocks and other hazards without input from engineers back on Earth.

Of course, Perseverance can’t get by on AutoNav alone. The involvement of the rover team remains critical in planning and driving Perseverance’s route. An entire team of specialists develops a navigation route along with planning the rover’s activity, whether it’s examining a geologically interesting feature on the way to its destination or, soon, taking samples.

Because of the radio signal delay between Earth and Mars, they can’t simply move the rover forward with a joystick. Instead, they scrutinize satellite images, sometimes donning those 3D glasses to view the Martian surface in the rover’s vicinity. Once the team signs off, they beam the instructions to Mars, and the rover executes those instructions the following day.

Perseverance’s wheels were modified as well to help with just how swiftly those plans are executed: Along with being slightly greater in diameter and narrower than Curiosity’s wheels, they each feature 48 treads that look like slightly wavy lines, as opposed to Curiosity’s 24 chevron-pattern treads. The goals were to help with traction as well as durability.

“Curiosity couldn’t AutoNav because of the wheel-wear issue,” Trosper said. “Early in the mission, we experienced small, sharp, pointy rocks starting to put holes in the wheels, and our AutoNav didn’t avoid those.”

Unlike its predecessors, Perseverance can employ one of its computers just for navigation on the surface; its main computer can devote itself to the many other tasks that keep the rover healthy and active.

This Vision Compute Element, or VCE, guided Perseverance to the Martian surface during its entry, descent, and landing in February. Now it’s being used full-time to map out the rover’s journey while helping it avoid trouble along the way.

The rover also keeps track of how far it’s moved from one spot to another using a system called “visual odometry.” Perseverance periodically captures images as it moves, comparing one position to the next to see if it moved the expected distance.

Team members say they look forward to letting AutoNav “take the wheel.” But they’ll also be ready to intervene when needed.

And just what is it like to drive on Mars? The planners and drivers say it never gets old.

“Jezero is incredible,” Verma said. “It’s a rover driver’s paradise. When you put on the 3D glasses, you see so much more undulation in the terrain. Some days I just stare at the images.”