This Transforming Rover Can Explore the Toughest Terrain 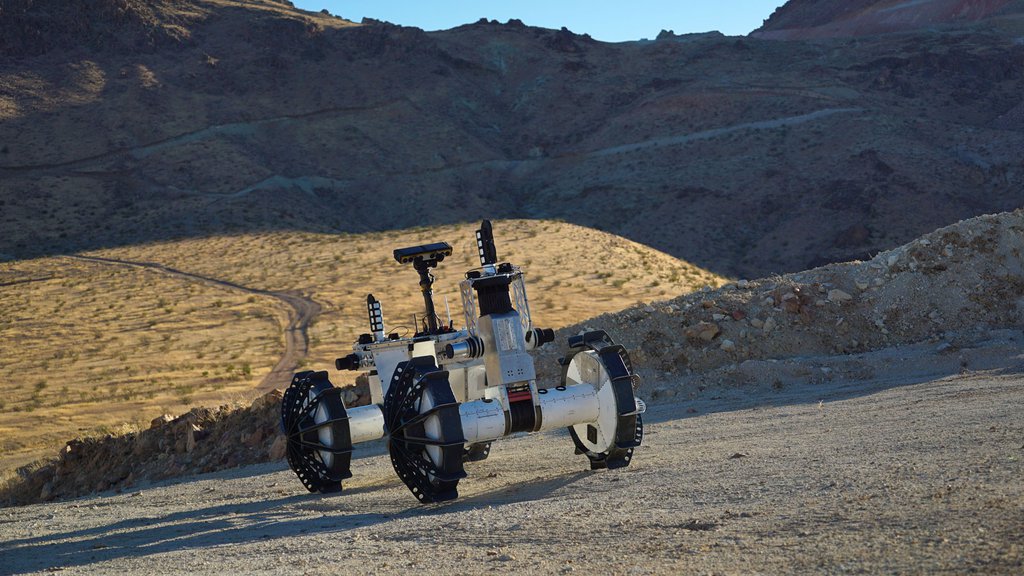 The DuAxel rover is seen here participating in field tests in the Mojave Desert. The four-wheeled rover is composed of two Axel robots. One part anchors itself in place while the other uses a tether to explore otherwise inaccessible terrain.
Credit: NASA/JPL-Caltech/J.D. Gammell 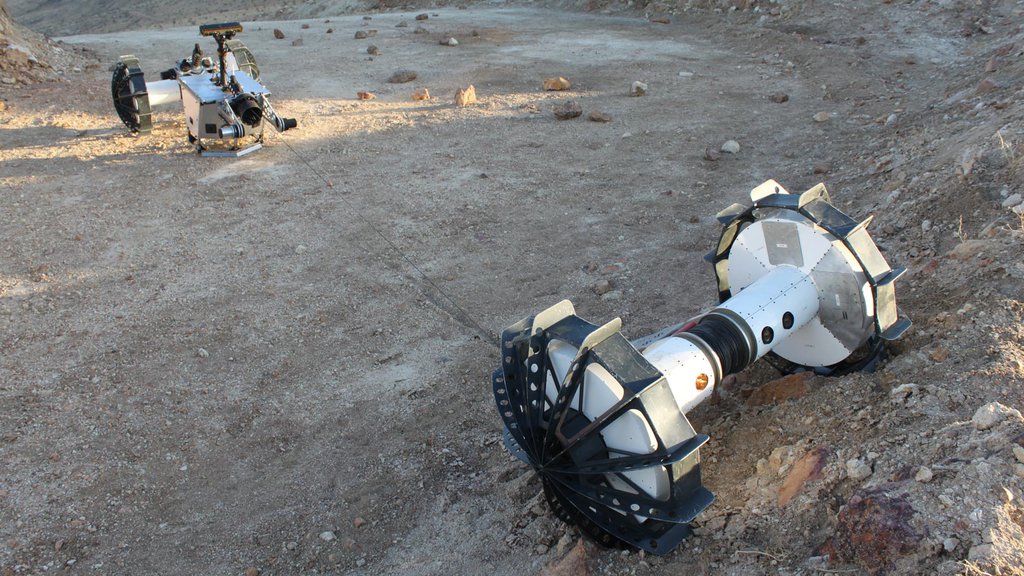 During the same field test, the DuAxel rover separates into two single-axled robots so that one can rappel down a slope too steep for conventional rovers.
Credit: NASA/JPL-Caltech/J.D. Gammell 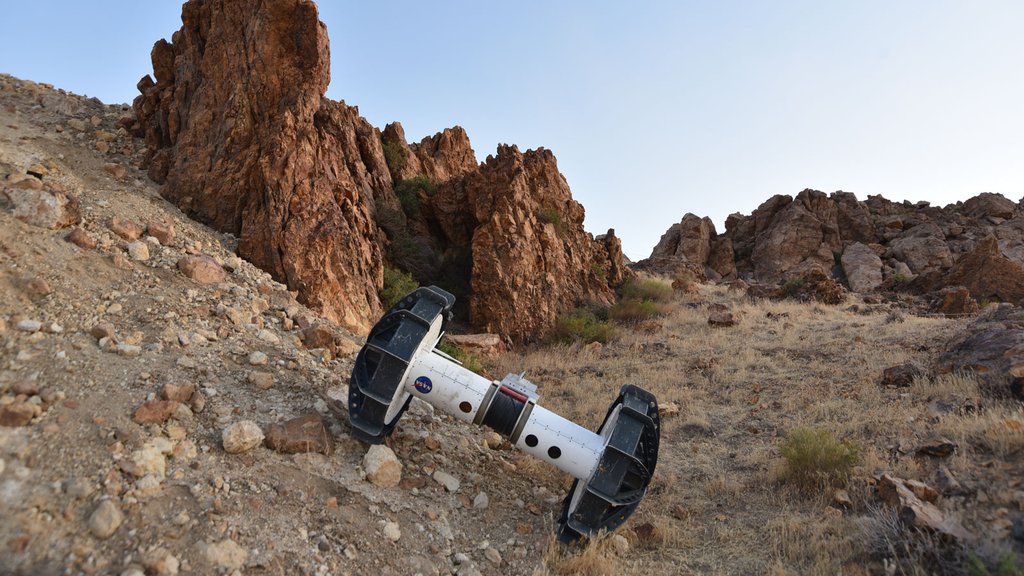 The two-wheeled Axel descends the slope while tethered to its counterpart anchored above the slope. The tether serves as a climbing rope of sorts while also providing power and a means of communication.
Credit: NASA/JPL-Caltech/J.D. Gammell

Made of a pair of two-wheeled vehicles, NASA's DuAxel is designed to descend crater sides and near-vertical cliffs on the Moon, Mars, and beyond.

A rover trundles over rocky terrain, its four metal wheels clattering along until they encounter a seemingly insurmountable hazard: a steep slope. Down below is a potential trove of science targets. With a typical rover, the operators would need to find another target, but this is DuAxel, a robot built for situations exactly like this.

The rover is actually made of a pair of two-wheeled rovers, each called Axel. To divide and conquer, the rover stops, lowers its chassis and anchors it to the ground before essentially splitting in two. With the rear half of DuAxel (short for "dual-Axel") firmly in place, the forward half undocks and rolls away on a single axle. All that connects the two halves now is a tether that unspools as the lead axle approaches the hazard and rappels down the slope, using instruments stowed in its wheel hub to study a scientifically attractive location that would normally be out of reach.

This scenario played out last fall during a field test in the Mojave Desert, when a small team of engineers from NASA's Jet Propulsion Laboratory in Southern California put the modular rover through a series of challenges to test the versatility of its design.

"DuAxel performed extremely well in the field, successfully demonstrating its ability to approach a challenging terrain, anchor, and then undock its tethered Axel rover," said Issa Nesnas, a robotics technologist at JPL. "Axel then autonomously maneuvered down steep and rocky slopes, deploying its instruments without the necessity of a robotic arm."

A flexible rover that has both ability to travel long distances and rappel down hard-to-reach areas of scientific interest has undergone a field test in the Mojave Desert in California to showcase its versatility. Composed of two Axel robots, DuAxel is designed to explore crater walls, pits, scarps, vents and other extreme terrain on the moon, Mars and beyond.

The idea behind creating two single-axle rovers that can combine into one with a central payload is to maximize versatility: The four-wheeled configuration lends itself to driving great distances across rugged landscapes; the two-wheeled version offers a nimbleness that larger rovers cannot.

"DuAxel opens up access to more extreme terrain on planetary bodies such as the Moon, Mars, Mercury, and possibly some icy worlds, like Jupiter's moon Europa," added Nesnas.

The flexibility was built with crater walls, pits, scarps, vents, and other extreme terrain on these diverse worlds in mind. That's because on Earth, some of the best locations to study geology can be found in rocky outcrops and on cliff faces, where many layers of the past are neatly exposed. They're hard enough to reach here, let alone on other celestial bodies.

The rover's mobility and ability to access extreme locations is an enticing combination to Laura Kerber, a planetary geologist at JPL. "This is why I find the Axel rover to be quite delightful," she said. "Instead of always trying to safeguard itself against dangers such as falling or flipping over, it is designed to withstand them."

The radical concept of two robotic vehicles functioning as one has roots in the late 1990s, when NASA began exploring ideas for modular, reconfigurable, self-repairing rovers. This inspired Nesnas and his team at JPL to develop the robust, flexible two-wheeled robot that would come to be known as Axel.

They envisioned a modular system: Two Axels could dock to either side of a payload, for example, or three Axels could dock to two payloads, and so on, creating a "train" of Axels capable of transporting many payloads. This concept also fulfilled the "self-repairing" requirement of NASA's challenge: Should one Axel fail, another could take its place.

Axel development remained focused on modular transportation until 2006, when satellite imaging of the Martian surface revealed gullies in crater walls. Later, the discovery of what appeared to be seasonal outflows of liquid water - dark features known as recurring slope lineae - heightened interest in using robots to take samples. Scientists wanted to know whether gullies and recurring slope lineae were caused by water flows or something else.

During warm seasons on Mars, dark streaks called "recurring slope lineae" often appear on crater slopes, as seen in this series of observations captured by the HiRISE camera aboard NASA's Mars Reconnaissance Orbiter. The DuAxel rover is designed to rappel to such inaccessible areas to study them.

But the slopes are too steep for a conventional rover - even for Curiosity or the soon-to-land Perseverance rover, both of which are designed to traverse slopes of up to 30 degrees. To explore these features directly would require a different kind of vehicle.

So Nesnas and his team began developing a version of Axel that would be tethered to a lander, using the tether not just to descend a crater side or steep canyon wall, but also to supply power and communicate with the lander. Its wheels could be equipped with extra-high grousers, or treads, for added traction, while the wheel hubs could house microscopes, drills, sample-collection scoops, and other instrumentation to study the terrain. To turn, the two-wheeled axle would just rotate one of its wheels faster than the other.

Interest in the concept's flexibility has led to a burgeoning family of two-wheeled designs, including NASA JPL's A-PUFFER and BRUIE, which extend the possibility of exploration to new destinations and applications, including under water on icy worlds.

Despite the tethered Axel's versatility, there was a notable limitation when used in conjunction with a stationary lander: The lander would need to be within rappelling distance of the crater side - demanding a degree of landing precision that may not be possible for a planetary mission.

To remove this requirement and boost mobility, the team reverted to the original modular design, adapted it to the new tethered Axel, and named it DuAxel.

"The key advantage of using DuAxel is made clear when you have landing site uncertainty, such as we do on Mars, or you want to move to a new location to rappel and explore with Axel," said Patrick Mcgarey, a robotic technologist at JPL and DuAxel team member. "It enables untethered driving from the landing site and allows for temporary anchoring to the terrain because it is essentially a transforming robot made for planetary exploration."

While DuAxel remains a technology demonstration and is waiting to be assigned a destination, its team will continue honing its technology; that way, when the time comes, the robot would be ready to roll where other rovers fear to tread.