The Mars Relay Network Connects Us to NASA’s Martian Explorers 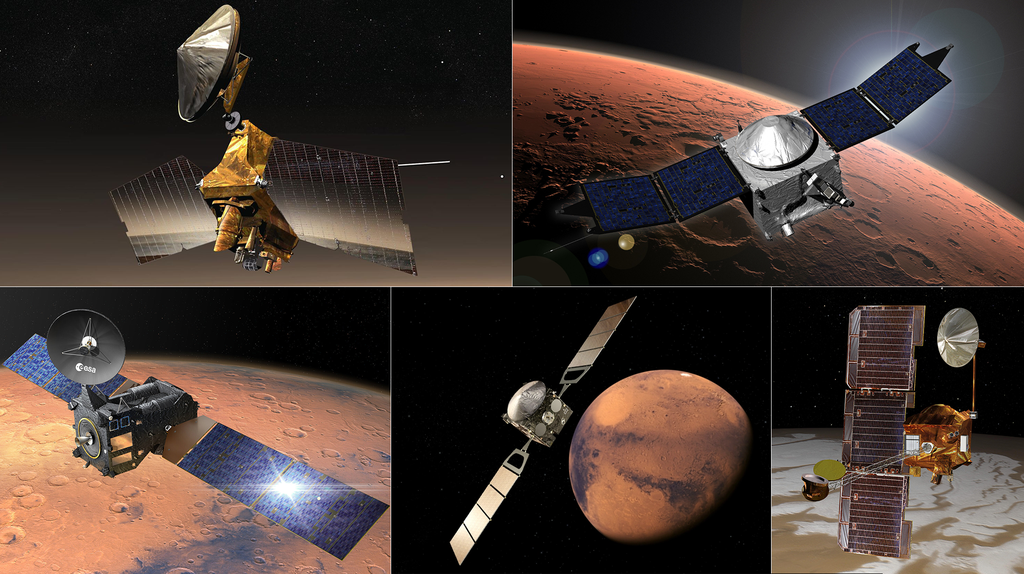 A tightly choreographed dance between NASA’s Deep Space Network and Mars orbiters will keep the agency’s Perseverance in touch with Earth during landing and beyond.

When NASA’s Mars 2020 Perseverance rover touches down with the Ingenuity Mars Helicopter on the Red Planet on Feb. 18, they won’t be alone. From orbit, two robotic buddies will be playing a special role in the event by checking in on the mission’s vital signs from the moment Perseverance enters the atmosphere to long after it makes its first tracks on the Martian surface.

NASA’s Mars Reconnaissance Orbiter (MRO) and the Mars Atmospheric and Volatile EvolutioN (MAVEN) orbiter are a part of the Mars Relay Network, a constellation of spacecraft that serves as a lifeline to the current surface missions on Mars – NASA’s Curiosity rover and InSight lander.

While some commands and telemetry can be sent directly to and from Earth, for the most part, the huge quantities of science data collected by rovers and landers cannot, because it would take too long. Most data traveling back to Earth must first be sent to the Mars orbiters overhead, which then transmit the data tens of millions of miles through interplanetary space to radio antennas on Earth, including the antennas of NASA’s venerable Deep Space Network (DSN).

“It is a huge endeavor to maintain communications with our spacecraft throughout the solar system, but Mars surface missions take this commitment to another level,” said Bradford Arnold, DSN project manager at NASA’s Jet Propulsion Laboratory in Southern California. “Since Mars Global Surveyor (MGS) arrived in orbit in 1997, a steady stream of orbiters has been added, carrying relay radios and antennas, which provide highly efficient communications between surface landers and Earth. While the choreography of this relay scheme is now somewhat commonplace for assets in place, it is still extremely challenging to coordinate all the communication links for the very brief time during a lander’s arrival.”

This dance will ensure that the world can watch Perseverance’s entry, descent, and landing – a harrowing sequence of events that will begin as the rover’s interplanetary cruise ends. 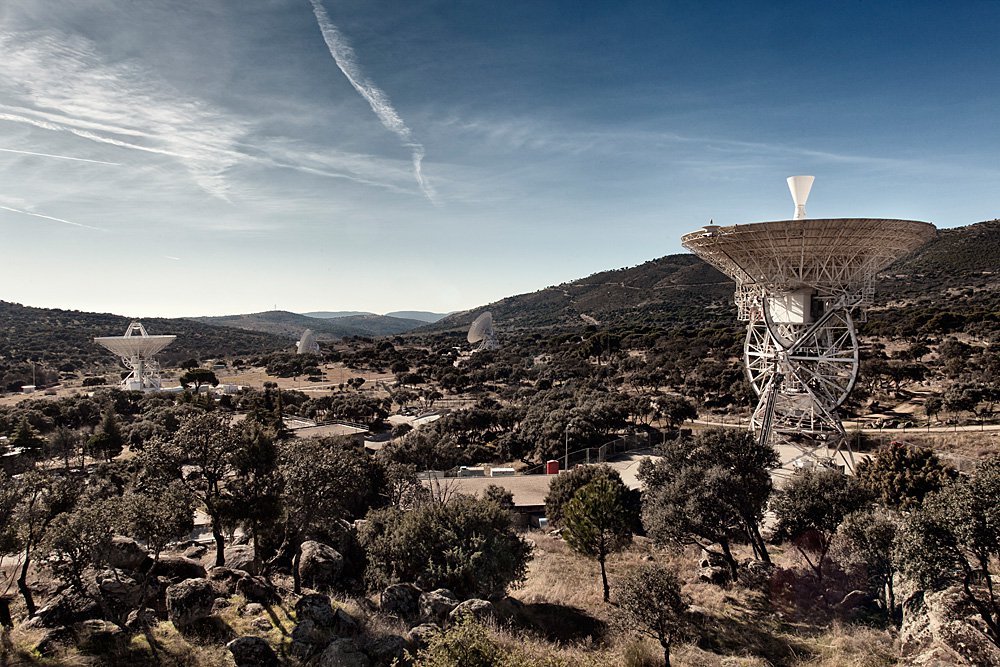 As Perseverance enters the Martian atmosphere inside its protective aeroshell, the rover will switch between several of its onboard antennas to stay in contact with Earth. Some of these antennas use powerful X-band transmissions that can send small amounts of data directly to the DSN. Others use ultra high frequencies (or UHF) to communicate with MRO and MAVEN.

Managed by JPL for NASA’s Space Communications and Navigation program (SCaN), the DSN consists of several parabolic radio antennas at ground stations in Southern California, near Madrid, Spain, and outside Canberra, Australia. This configuration allows mission controllers to communicate with spacecraft throughout the solar system at all times throughout Earth’s daily rotation. During Perseverance’s landing, Madrid’s antennas will be trained on Mars, taking the lead when receiving data. The Goldstone complex near Barstow, California, will also be listening in as a backup.

Since the landing of NASA’s Mars Exploration Rovers Spirit and Opportunity in 2004, science data has been routinely relayed via the Mars orbiters to the DSN, beginning with MGS and then NASA’s veteran Odyssey orbiter, which has been circling Mars since 2001.

Because the final two minutes of Perseverance’s descent and landing will be mostly beyond Mars’ horizon from Earth’s perspective, “direct-to-Earth” X-band communications will be impossible, and the rover will communicate with Earth solely via MRO and MAVEN when it lands.

In orbit since 2006, MRO was designed as a science mission and to act as a communications relay for landed surface missions. But it received an upgrade to prepare for Perseverance’s landing.

“In the past year, the software of the MRO spacecraft and its UHF radio have been updated to allow the near-immediate return of data collected during EDL. MRO will capture the telemetry transmitted by Perseverance and use its 3-meter [10-foot] dish to transmit it immediately to Earth,” said Roy Gladden, manager of the Mars Relay Network at JPL. “We call this a ‘bent pipe’, which allows us to get word from Perseverance even though Mars is blocking our view from Earth.”

As MRO relays Perseverance’s landing in near-real-time, engineers in mission control hope to confirm landing – and receive the first image – soon after 12:55 p.m. PST (3:55 p.m. EST). Because of the distance the signal has to travel from Mars to Earth, the spacecraft will have landed (known as “spacecraft event time”) 11 minutes and 22 seconds earlier.

Later, at about 4:27 p.m. PST (7:27 p.m. EST), Odyssey will fly over the landing site and communicate with the rover to confirm its health. The next relay session after that will be at about 6:36 p.m. PST (9:36 p.m. EST) by ESA’s (the European Space Agency’s) Trace Gas Orbiter (TGO), which will also check in on Perseverance’s health and relay any images the rover has transmitted from the landing site.

In addition, MAVEN will capture the entire landing with a data-rich broad spectrum recording, and will send the information back to Earth several hours after landing. This data could be used to fill in any telemetry (engineering data) from the rover during EDL that was missed by MRO during the initial relay, and provide other measurements of the event.

This buddy system helps ensure that little data is lost during Perseverance’s historic landing in Jezero Crater while also confirming the health of the rover and its precise location.

Explore this interactive visualization of the Mars Relay Network to see the spacecraft that communicate with NASA’s surface missions. Click on the calendar icon at the bottom of the screen to see which orbiters are relaying data in real-time. The full interactive experience is at NASA’s Eyes. Credit: NASA/JPL-Caltech

Of course, communications don’t stop after landing. That’s when the complicated task of sending commands to Perseverance and receiving the rover’s huge science data output will begin.

During its mission, the rover will have all of the orbiters in the Mars Relay Network for support – including NASA’s MRO, MAVEN, Odyssey, and ESA’s TGO, which has been playing a key role in the network for the past few years. Even ESA’s Mars Express orbiter will be available for emergency communications should the need arise. While the NASA orbiters communicate exclusively with the DSN, the ESA orbiters also communicate via the European Space Tracking network and ground stations located in Russia.

Although the Mars Relay Network has expanded to include more spacecraft and more international partners, with every new surface mission comes added complexity when scheduling the relay sessions for each orbiter flyover.

“Curiosity and InSight are near enough to each other on Mars that they are almost always visible by the orbiters at the same time when they fly over. Perseverance will land far enough away that it can’t simultaneously be seen by MRO, TGO, and Odyssey, but sometimes MAVEN, which has a larger orbit, will be able to see all three vehicles at the same time,” added Gladden. “Since we use the same set of frequencies when communicating with all three of them, we have to carefully schedule when each orbiter talks to each lander. We’ve gotten good at this over the last 18 years as rovers and landers have come and gone, including collaborating with ESA, and we’re excited to see the Mars Relay Network set new throughput records as it returns Perseverance’s huge data sets.”

Ultimately, this communications endeavor connecting Earth and Mars will enable us to see high-resolution images (and hear the first sounds) captured by Perseverance, and scientists will be able to further our knowledge about the Red Planet’s ancient geology and fascinating astrobiological potential.

Subsequent missions, currently under consideration by NASA in cooperation with ESA, would send spacecraft to Mars to collect these sealed samples from the surface and return them to Earth for in-depth analysis.

The Mars 2020 mission is part of a larger NASA initiative that includes missions to the Moon as a way to prepare for human exploration of the Red Planet. Charged with returning astronauts to the Moon by 2024, NASA will establish a sustained human presence on and around the Moon by 2028 through NASA’s Artemis lunar exploration plans.

The Deep Space Network is managed by JPL for NASA’s Space Communications and Navigation (SCaN), which is located at NASA’s headquarters within the Human Exploration and Operations Mission Directorate.

More About the Mars Relay Network

The Mars Relay Network is part of the Mars Exploration Program, which is managed at JPL on behalf of NASA’s Planetary Science Division within its Science Mission Directorate.