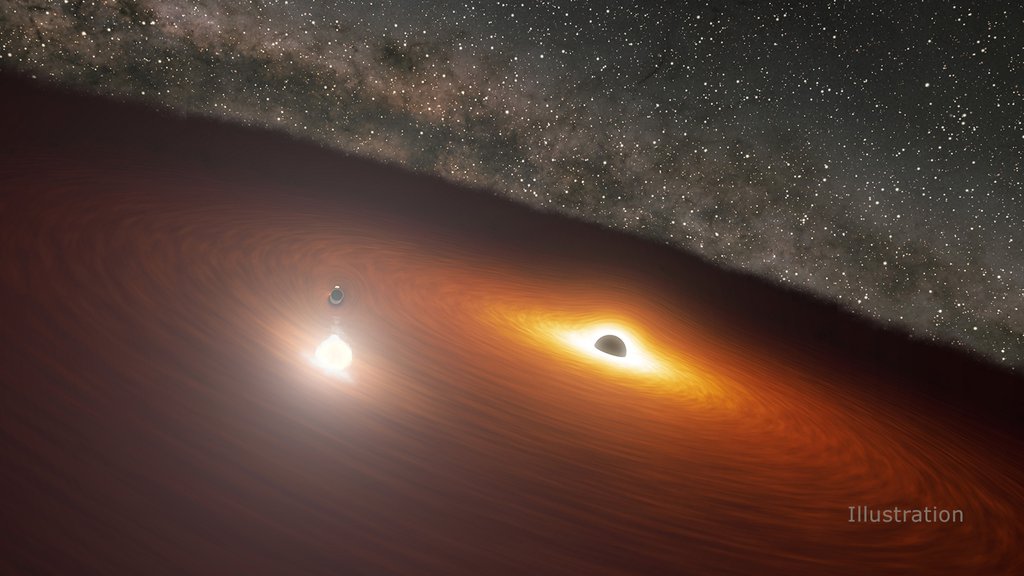 The recently retired infrared observatory was the only telescope to spot a far-off flash of light that holds clues about the physical characteristics of these cosmic mysteries.

Black holes aren't stationary in space; in fact, they can be quite active in their movements. But because they are completely dark and can't be observed directly, they're not easy to study. Scientists have finally figured out the precise timing of a complicated dance between two enormous black holes, revealing hidden details about the physical characteristics of these mysterious cosmic objects.

The OJ 287 galaxy hosts one of the largest black holes ever found, with over 18 billion times the mass of our Sun. Orbiting this behemoth is another black hole with about 150 million times the Sun's mass. Twice every 12 years, the smaller black hole crashes through the enormous disk of gas surrounding its larger companion, creating a flash of light brighter than a trillion stars - brighter, even, than the entire Milky Way galaxy. The light takes 3.5 billion years to reach Earth.

The OJ 287 galaxy hosts one of the largest black holes ever found, with over 18 billion times the mass of our Sun. Orbiting this behemoth is another massive black hole. Twice every 12 years, the smaller black hole crashes through the enormous disk of gas surrounding its larger companion, creating a flash of light brighter than a trillion stars.

But the smaller black hole's orbit is oblong, not circular, and it's irregular: It shifts position with each loop around the bigger black hole and is tilted relative to the disk of gas. When the smaller black hole crashes through the disk, it creates two expanding bubbles of hot gas that move away from the disk in opposite directions, and in less than 48 hours the system appears to quadruple in brightness.

Because of the irregular orbit, the black hole collides with the disk at different times during each 12-year orbit. Sometimes the flares appear as little as one year apart; other times, as much as 10 years apart. Attempts to model the orbit and predict when the flares would occur took decades, but in 2010, scientists created a model that could predict their occurrence to within about one to three weeks. They demonstrated that their model was correct by predicting the appearance of a flare in December 2015 to within three weeks.

Then, in 2018, a group of scientists led by Lankeswar Dey, a graduate student at the Tata Institute of Fundamental Research in Mumbai, India, published a paper with an even more detailed model they claimed would be able to predict the timing of future flares to within four hours. In a new study published in the Astrophysical Journal Letters, those scientists report that their accurate prediction of a flare that occurred on July 31, 2019, confirms the model is correct.

The observation of that flare almost didn't happen. Because OJ 287 was on the opposite side of the Sun from Earth, out of view of all telescopes on the ground and in Earth orbit, the black hole wouldn't come back into view of those telescopes until early September, long after the flare had faded. But the system was within view of NASA's Spitzer Space Telescope, which the agency retired in January 2020.

After 16 years of operations, the spacecraft's orbit had placed it 158 million miles (254 million kilometers) from Earth, or more than 600 times the distance between Earth and the Moon. From this vantage point, Spitzer could observe the system from July 31 (the same day the flare was expected to appear) to early September, when OJ 287 would become observable to telescopes on Earth.

"When I first checked the visibility of OJ 287, I was shocked to find that it became visible to Spitzer right on the day when the next flare was predicted to occur," said Seppo Laine, an associate staff scientist at Caltech/IPAC in Pasadena, California, who oversaw Spitzer's observations of the system. "It was extremely fortunate that we would be able to capture the peak of this flare with Spitzer, because no other human-made instruments were capable of achieving this feat at that specific point in time."

Scientists regularly model the orbits of small objects in our solar system, like a comet looping around the Sun, taking into account the factors that will most significantly influence their motion. For that comet, the Sun's gravity is usually the dominant force, but the gravitational pull of nearby planets can change its path, too.

Determining the motion of two enormous black holes is much more complex. Scientists must account for factors that might not noticeably impact smaller objects; chief among them are something called gravitational waves. Einstein's theory of general relativity describes gravity as the warping of space by an object's mass. When an object moves through space, the distortions turn into waves. Einstein predicted the existence of gravitational waves in 1916, but they weren't observed directly until 2015 by the Laser Interferometer Gravitational Wave Observatory (LIGO).

While previous studies of OJ 287 have accounted for gravitational waves, the 2018 model is the most detailed yet. By incorporating information gathered from LIGO's detections of gravitational waves, it refines the window in which a flare is expected to occur to just 1 1/2 days.

To further refine the prediction of the flares to just four hours, the scientists folded in details about the larger black hole's physical characteristics. Specifically, the new model incorporates something called the "no-hair" theorem of black holes.

Published in the 1960s by a group of physicists that included Stephen Hawking, the theorem makes a prediction about the nature of black hole "surfaces." While black holes don't have true surfaces, scientists know there is a boundary around them beyond which nothing - not even light - can escape. Some ideas posit that the outer edge, called the event horizon, could be bumpy or irregular, but the no-hair theorem posits that the "surface" has no such features, not even hair (the theorem's name was a joke).

In other words, if one were to cut the black hole down the middle along its rotational axis, the surface would be symmetric. (The Earth's rotational axis is almost perfectly aligned with its North and South Poles. If you cut the planet in half along that axis and compared the two halves, you would find that our planet is mostly symmetric, though features like oceans and mountains create some small variations between the halves.)

In the 1970s, Caltech professor emeritus Kip Thorne described how this scenario - a satellite orbiting a massive black hole - could potentially reveal whether the black hole's surface was smooth or bumpy. By correctly anticipating the smaller black hole's orbit with such precision, the new model supports the no-hair theorem, meaning our basic understanding of these incredibly strange cosmic objects is correct. The OJ 287 system, in other words, supports the idea that black hole surfaces are symmetric along their rotational axes.

"It is important to black hole scientists that we prove or disprove the no-hair theorem. Without it, we cannot trust that black holes as envisaged by Hawking and others exist at all," said Mauri Valtonen, an astrophysicist at University of Turku in Finland and a coauthor on the paper.

Spitzer science data continues to be analyzed by the science community via the Spitzer data archive located at the Infrared Science Archive housed at IPAC at Caltech in Pasadena. JPL managed Spitzer mission operations for NASA's Science Mission Directorate in Washington. Science operations were conducted at the Spitzer Science Center at IPAC at Caltech. Spacecraft operations were based at Lockheed Martin Space in Littleton, Colorado. Caltech manages JPL for NASA.