At its launch in 2003, NASA’s Spitzer Space Telescope was the most sensitive infrared space telescope in history. Its 16-year lifetime revolutionized our view of the cosmos.

Spitzer made discoveries from inside our solar system to nearly the edge of the Universe. The mission’s list of accomplishments is long and includes some of the first investigations of exoplanet atmospheres (planets orbiting stars other than the Sun), the detection of seven Earth-size exoplanets around a single star, surprising revelations about some of the oldest galaxies in the universe, and the discovery of the largest ring around Saturn. The powerful observational capabilities of this long-lived mission transformed our view of the cosmos.

These images show the galaxy M81 in visible light (left) and infrared light (right). Together they highlight how different wavelengths of light can reveal different features of cosmic objects. Credit: NASA/JPL-Caltech

For more of Spitzer’s science highlights and areas of study, go here

What is infrared light?

Infrared light is invisible to the human eye, but it is a constant presence in our world. Many objects that are too cold to emit visible light radiate brightly in infrared wavelengths. For example, although a hot cup of coffee doesn't emit visible light, it does produce plenty of infrared light. Humans and animals also emit infrared light, which is why it is used in night-vision equipment. Similarly, many cosmic objects that are too cold to produce visible light may be visible to infrared detectors like those onboard Spitzer, including asteroids, planets, and clouds of dust where stars and planets are born. Longer infrared wavelengths can pass through clouds of gas and dust that are opaque in visible light, revealing the cosmic treasures that are hidden inside.

Infrared light is electromagnetic radiation within a particular wavelength range, with slightly longer wavelengths than visible light. Infrared wavelengths are often referred to by their physical length, measured in micrometers or microns. A micron is one millionth of a meter.

While some infrared wavelengths can be observed from the ground, others are completely obscured by Earth’s atmosphere. It was not until NASA, together with the United Kingdom and the Netherlands, sent the first infrared telescope to space in 1983 (the Infrared Astronomical Satellite, or IRAS) that scientists grasped the full breadth of the infrared universe. The first proposal for the mission that would eventually become Spitzer was submitted to NASA in 1971. Though it took decades to get to launch, along the way the mission incorporated lessons learned by IRAS and other space-based infrared telescopes. When it launched, Spitzer had higher sensitivity, larger detector arrays, and better precision pointing — critical for studying small, distant objects, including exoplanets — than any of its predecessors. It remains the most sensitive infrared observatory ever operated in the 3 to 40 micron range. Throughout its lifetime, it has combined its powerful capabilities with those of other observatories to provide even deeper insights into our universe.

Space-based infrared telescopes come with another major advantage: They get away from the substantial amount of infrared light produced by Earth's atmosphere and can be cooled to such low temperatures they produce very little infrared light themselves. Just as the light from the Sun makes it impossible to see the stars during the day, these sources of ambient infrared light overwhelm faint sources in the night sky. A warm telescope on the ground looks at the heavens through a bright haze of infrared radiation, but for a cold telescope in space, this haze disappears and the universe can be seen in all its infrared glory. Thus Spitzer — with a mirror only 33 inches (85 cm) in diameter (about the size of a hula-hoop) — is much more sensitive than even the largest ground-based telescopes (which are up to 33 feet or 10 meters in diameter) at the infrared wavelengths where Spitzer operates.

Spitzer is one of four telescopes in NASA’s Great Observatories program, which have demonstrated the power of observing the cosmos in multiple wavelengths of light.

Together, NASA’s four Great Observatories have covered wavelengths from infrared to gamma rays. NASA’s Hubble Space Telescope (which observes primarily visible light) and the Chandra X-Ray Observatory are still operating, while the Compton Gamma Ray Observatory was decommissioned in 2000. Many of Spitzer’s great discoveries have been made in conjunction with other observatories both in space and on the ground. 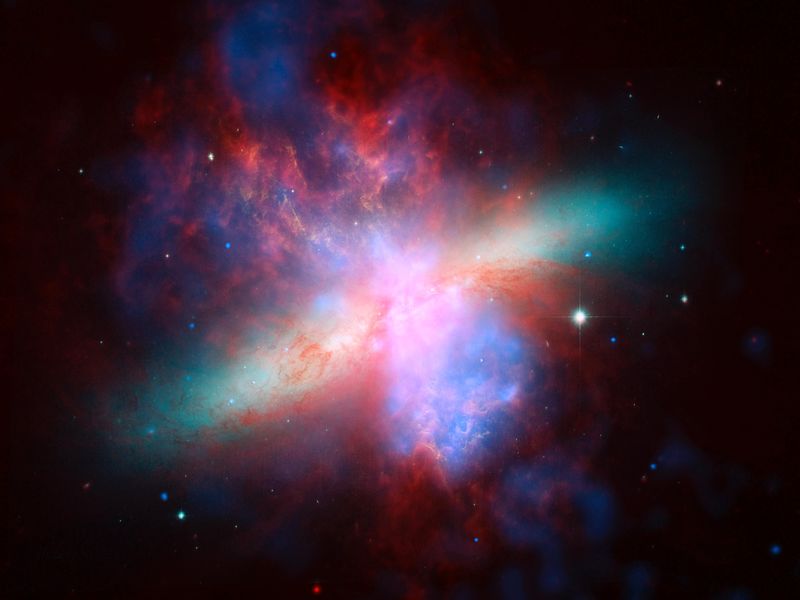 Spitzer is also helping to lay the groundwork for future telescopes that will observe the universe in infrared wavelengths.

The James Webb Space Telescope, set to launch in 2021, will observe in wavelengths that overlap the ones Spitzer observes. (During its “cold” or cryogenic mission, which ran from 2003 to 2009, Spitzer observed infrared wavelengths from 3 to 160 microns. Webb will observe from 0.6 through 28 microns.) Webb’s primary mirror has an area 50 times larger than Spitzer's, giving Webb higher resolution and the ability to see objects much farther away from Earth.

Webb will be able to conduct deeper and more detailed studies of many objects that Spitzer observed. By having a list of targets that Spitzer has already explored, Webb scientists can investigate the most interesting and scientifically valuable ones. Webb will be able to study in detail questions that Spitzer began to explore, such as: When did the earliest galaxies form? How do massive galaxies form and evolve and grow? How do planetary systems form around stars like the Sun? What molecules are found in the atmospheres of Earth-like planets orbiting stars smaller than our Sun, or planets hotter than Earth around Sun-like stars?

Spitzer’s legacy will also help inform NASA's upcoming Wide Field Infrared Survey Telescope (WFIRST) and the European Space Agency’s Euclid space telescope, both of which will produce large-scale maps of the infrared universe. The combination of Spitzer, WFIRST and Euclid data will cover large regions of the sky, and provide new insights into how the most massive galaxies formed and evolved in the early universe. Spitzer has also been a pathfinder for determining the masses of planets orbiting outside the snow line of their systems (the boundary beyond which volatile chemicals such as water, carbon dioxide and ammonia freeze into ice). WFIRST will build on this gradually, creating a census of Jupiter and even Mars-type planets beyond this so called snow line. 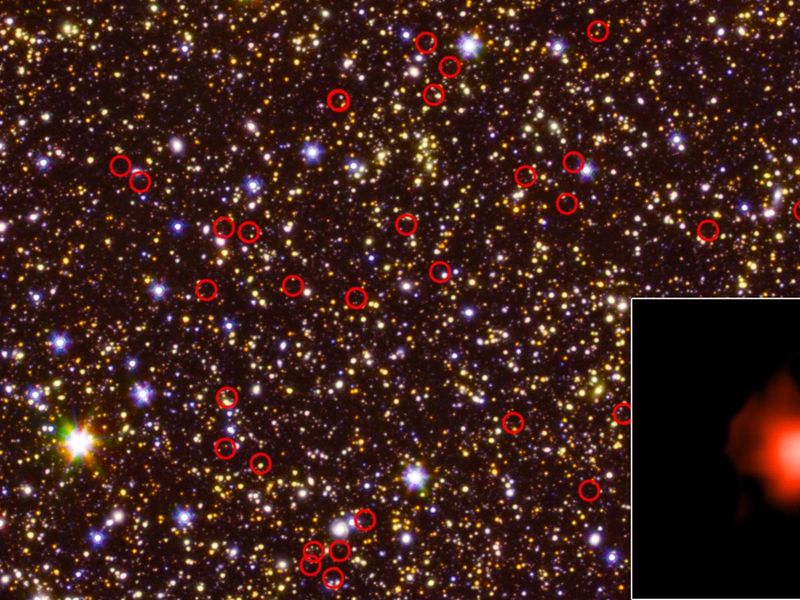 Spitzer's original mission planners never expected the project to continue for 16 years. Its extended lifetime is due to the creativity and hard work of the mission scientists and engineers.

Spitzer launched in 2003 and carried out its prime mission until early 2009, when its liquid-helium coolant ran out. The spacecraft’s passive cooling system allowed Spitzer to then begin a “warm” operation phase, operating at an average temperature of about 28.6 Kelvin (minus 408 degrees Fahrenheit, or minus 244 degrees Celsius). Spitzer has continued operations in the warm mission phase for more than 10 years and received five mission extensions from NASA.

In recent years, operation of the Spitzer spacecraft has been challenging, mainly because the spacecraft (which is orbiting the Sun) drifts farther from Earth each year. This creates an orbital geometry in which Spitzer must turn its fixed-position solar panels away from the Sun during communications with Earth, relying on battery power while receiving commands from and downloading data to Earth. This limits how long the spacecraft can communicate with Earth in a given period. That isn't the only engineering challenge posed by the changing orbital geometry. It also exposes some regions of the telescope meant to remain in darkness to direct sunlight, risking overheating components. In addition, the greater distance of Spitzer requires that data be downloaded at a lower data rate. That Spitzer has operated this long is a testament to the ingenuity, creativity and hard work of the project team members.

To read more about the challenges overcome by the Spitzer engineering team, go here.

The Spitzer mission will live on through its science.

Even though NASA will decommission Spitzer on Jan. 30, 2020, all the data that the telescope has compiled during its lifetime become publicly available no more than one year after they are collected. An archive of the data will remain publicly available for the foreseeable future and is backed by NASA support. Astronomers already use the archive for new analyses and to complement observations by other observatories, and they're expected to continue doing so long after the spacecraft is decommissioned. And, astronomers can still pore over the more than 8,700 papers (and counting) published using Spitzer observations. The observatory has helped a generation of astronomers explore the infrared universe, and that legacy will continue for generations to come.

NASA's Jet Propulsion Laboratory in Pasadena, California, manages and operates the Spitzer Space Telescope mission for NASA's Science Mission Directorate in Washington. Spacecraft engineering is conducted at Lockheed Martin Space in Littleton, Colorado. Science planning and operations are conducted at the Spitzer Science Center at Caltech in Pasadena. Data are archived at the Infrared Science Archive at Caltech-IPAC. Caltech manages JPL for NASA.

Lockheed Martin in Sunnyvale, California, built the Spitzer spacecraft, and during development served as lead for systems and engineering, and integration and testing. Ball Aerospace and Technologies Corporation (BATC) in Boulder, Colorado, provided the optics, cryogenics and thermal shells and shields for Spitzer.

For more about the missions that set the stage for Spitzer, go here.
For a thorough history of infrared astronomy, go here.