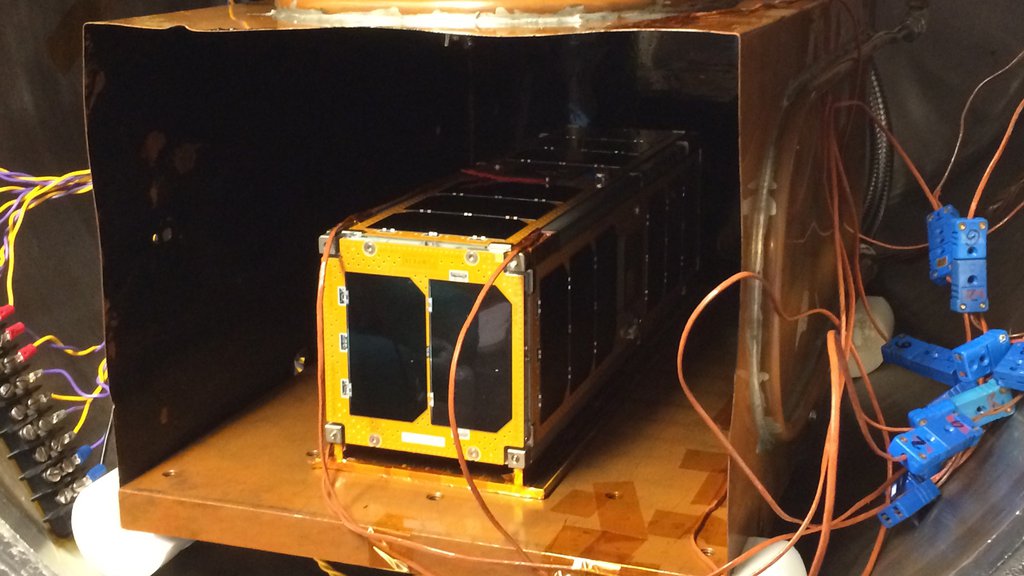 A thermal vacuum test of the Low Mass Radio Science Transponder-Satellite (LMRST-Sat) was performed at California Polytechnic State University, San Luis Obispo, California, in February of this year. The six-hour test, carried out in a partial vacuum and at temperatures reaching 140 degrees Fahrenheit (60 degrees Centigrade) was performed to "bake out" any contaminants present on the CubeSat's surfaces.
Credit: NASA/JPL-Caltech 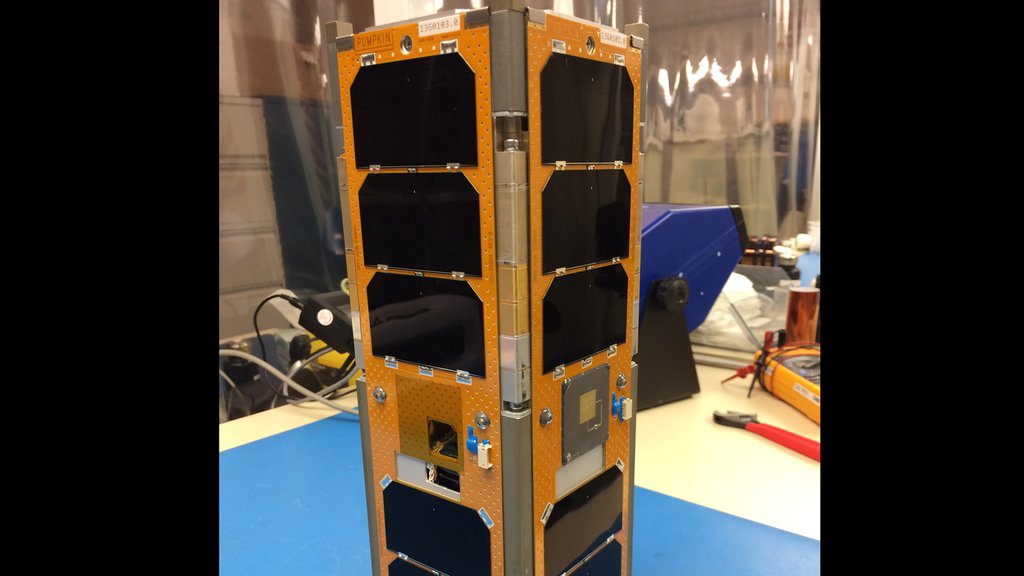 The Low Mass Radio Science Transponder-Satellite (LMRST-Sat) is about 4 by 4 by 12 inches (10 by 10 by 30 centimeters) in size and weighs as much as a kid's bowling ball (8 pounds or, 4 kilograms). The CubeSat is a collaboration between NASA's Jet Propulsion Laboratory in Pasadena, California, and Stanford University's Space and Systems Development Laboratory, Stanford, California.
Credit: NASA/JPL-Caltech

Courtney Duncan, an engineer at NASA's Jet Propulsion Laboratory in Pasadena, California, says studying radio waves coming from a known source in space can reveal a great deal about objects in our solar system. Of course, there is nothing new in that. NASA scientists have been turning the transmissions of their spacecraft's radio into scientific gold since almost the beginning of the space age. And ground-based astronomers have not been left outside of the radio spectrum looking in. Radio astronomers have been studying naturally occurring extraterrestrial radio waves since the 1930s. But the kind of radio science Duncan is interested in requires a well-understood transmitter -- the kind that is built and tested by human beings before being rocketed into space as part of a mission of exploration.

Duncan is the principal investigator for a mission to put a dedicated radio science instrument into a low-cost CubeSat for launch into Earth orbit next year. Called the LMRST-Sat (short for Low Mass Radio Science Transponder-Satellite), the project is a collaboration between JPL and the Space and Systems Development Laboratory of Stanford University, Palo Alto, California. Packaging the mission in a CubeSat cuts costs dramatically while providing a great proving ground for more ambitious projects.

CubeSats were conceived in the early 2000s as an inexpensive way to get experiments into space. They are small devices. Each cube is roughly 4 inches to a side, or about the size of a boxed coffee mug. LMRST-Sat will be the size of three of those, about 4 by 4 by 12 inches.

There is another huge advantage to CubeSats. In the past, anything that went into a rocket, even as a hitchhiker payload, had to be integrated, a long and expensive process of making sure that whatever you were placing in the launcher would not adversely affect anything else. But CubeSats are mounted inside a box on the rocket, separate from the expensive main payload and deployed separately.

"As long as you follow some pretty straightforward rules, you can put your CubeSat in that box," said Duncan. "When everything is safe in orbit, you can open the box and go on your merry way, and that's a great way to do radio science."

Since the first days of the space program, NASA and JPL have used radio waves from known sources to chart the solar system. When Mariner 4 flew past Mars in 1965, the space agency carefully tracked differences in the radio signal from the probe as it crossed behind the planet. From tiny changes in the signal as it briefly intersected the thin Martian atmosphere, scientists were able to infer the much lower atmospheric pressure -- about 100 times less than previously thought.

One of the earliest success stories of radio science, the Mariner 4 revelation represented a major change in how we looked at the Red Planet.

Since then, increasingly complex and ambitious research has been conducted using radio signals from spacecraft. But with every moment of planetary missions accounted for, it can be difficult to find spare time for things like radio science when so many other experiments are vying for attention, power and bandwidth.

LMRST is a demonstration mission that will fly in an elliptical orbit around Earth. It is scheduled to hitch a ride into orbit aboard an Atlas V carrying a National Reconnaissance Office payload this fall.

In the future, radio scientists would like something farther from our planet to allow them to measure the effects that longer distances and other planets have on radio signals. This technique can also be performed just about anywhere in the solar system.

Using a spacecraft's trajectory through the Jovian system, radio science during a future mission to Jupiter could be used to discern if the moon Europa has any atmosphere.

"An occultation occurs when a spacecraft passes behind a moon or planet, and any atmosphere present distorts the radio waves," said Duncan. "If there is any bending or stretching before the signal disappears, you know there is some kind of atmosphere."

During the same hypothetical mission, the spacecraft would more than likely fly past Europa many times. Every flyby would give you a different look at the gravity field. If the moon were mostly liquid, that gravity field would be largely homogenous -- pretty close to spherical. But if it's a pile of rock-like Earth, it could be lumpy in many places.

Duncan and his team are thrilled to have a dedicated radio transmitter to carry out their experiments and answer some long-standing questions. And because LMRST is specifically for radio science, they don't need to "borrow" time from other highly scheduled missions.

"We will be able to just turn it on when we want to," said Duncan.

For more information about LMRST, visit: